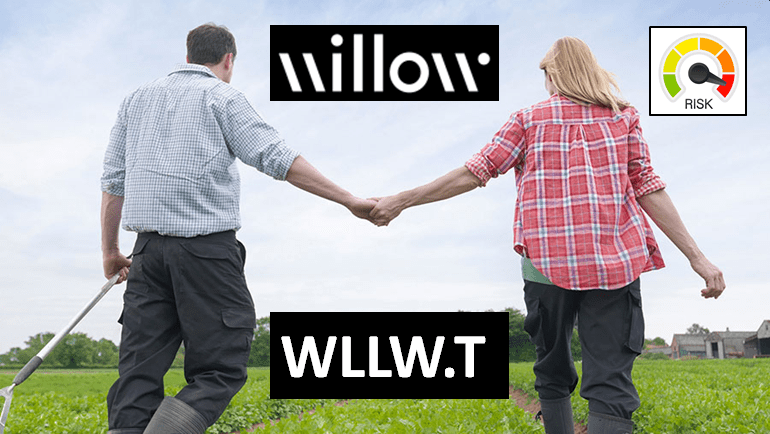 Willow Biosciences (WLLW.T) takes the romance (and risk) out of cannabinoid production

Our notions of farming are romantic.

Good Reads, lists “68 Romances Set on Farms” including, “Cream of the Crop” – set on a pastoral farm where our heroine Natalie falls deliciously in love with a well-endowed artisanal cheese-maker.

In reality, farming is about as romantic as pouring concrete.

In the last three years, cannabis grow-op investors have found this out the hard way.

“In several northern pivots, a herd of antelope caused significant damage to the cannabis plants,” reported Crop in 2019.

“More than 50% of Hawaii’s 2019 research hemp crop had to be destroyed because of elevated THC levels,” reported the Hemp Industry Daily (HID), “a problem that state agriculture officials attribute to a lack of cultivars suited to a tropical climate”.

Cannabis farming is also rough on the environment, requiring 22 liters of water per plant a day – or three billion liters per square kilometer of greenhouse-grown plants.

If only there was a company that could produce pure cannabinoids (CBD, CBG) without the need for agricultural land, environmental permits, labourers, greenhouses, soil, water, fertiliser, pesticides etc.

Willow Biosciences (WLLW.T) is a Canadian biotech company based in Vancouver, BC, that is using “a proprietary yeast strain laboratory process” to produce commercial quantities of CBD and CBG.

“Willow’s current focus is in the production of cannabinoids for the treatment for pain, anxiety, obesity, brain disorders, among other significant indications,” states WLLW, “Our manufacturing process creates a consistent, scalable and sustainable product that allows for the discovery and development of new life changing drugs”.

How do you make cannabinoids from yeast?

At its core, this is not ground breaking technology: Aspirin was created from the bark of a willow tree; insulin and penicillin are manufactured using biosynthetic methods; Heme that provides the meat taste in the Impossible Burger and is also biosynthetically produced in yeast.

Willow’s concept is not just a flow sheet scrawled on a napkin.

On July 29, 2020 Willow Biosciences announced that it has begun its 500-liter pilot production run to deliver samples of its first cannabinoid, cannabigerol (CBG), in Q3 of 2020.

“We believe that CBG has the potential to be impactful to the recreational, health and wellness landscape,” states Willow.

“Despite the medical appeal and consumer demand there’s one big hurdle to face,” states Bloomberg, “CBG is notoriously expensive to produce, so much so it’s been dubbed the “the Rolls Royce of cannabinoids.”

Most hemp contains minute percentages of CBG. Some hemp strains now contain 20% CBD. If the CBG content of the same crop is only 1%, that means you need to extract 20 times the amount of biomass to get the same amount of CBG out.

“We will be the first company to biosynthetically produce material amounts of cannabinoids when our samples of CBG are ready in Q3 of this year,” states Peters.

This pilot is ahead of schedule. In conversations with global consumer packaged goods entities, Willow has confirmed “that there is significant demand for ultra-pure, pharmaceutical grade cannabinoids.”

Will synthetic CBG kill the market for flower-derived CBG?

For some consumers, the word “synthetic” carries stigma.

“The problem with JWH-018 (a synthetic cannabinoid compound) is that absolutely nothing is known regarding its toxicity or metabolites,” states John Huffman who helped develop the JWH-018 chemical.

That said, the gate is open.

“We will look upon this time as a watershed moment,” stated Savile, “We will finally be able to pivot to a variety of cannabinoid choices that best match our customers’ needs. Through our manufacturing methods we can achieve these solutions, and continue to assure our customers of category-altering purity, quality and safety.”

Prior to joining Willow, Dr. Savile worked in senior leadership roles at Intrexon, a biotechnology company, and Codexis, a protein engineering company. A chemist, assay scientist and protein engineer by trade, Savile received his PhD in 2006 from McGill University.

At the Willow laboratory – he has to raise his hand before speaking.

WLLW’s 35-person science and tech team have a collective 21 PhDs, while co-founding five companies which sold for an aggregate of $4 billion.

That’s 20 PHDs more than my GP and I have combined.

For the first five months of its life, Willow mirrored the general gloom in the cannabis space, drifting downward in tandem with The Horizons Marijuana Life Sciences Index ETF (HMMJ.T) – which is benchmarked to the North American Marijuana Index.

Two months ago, WWLW broke away from the pack, and started moving upwards. 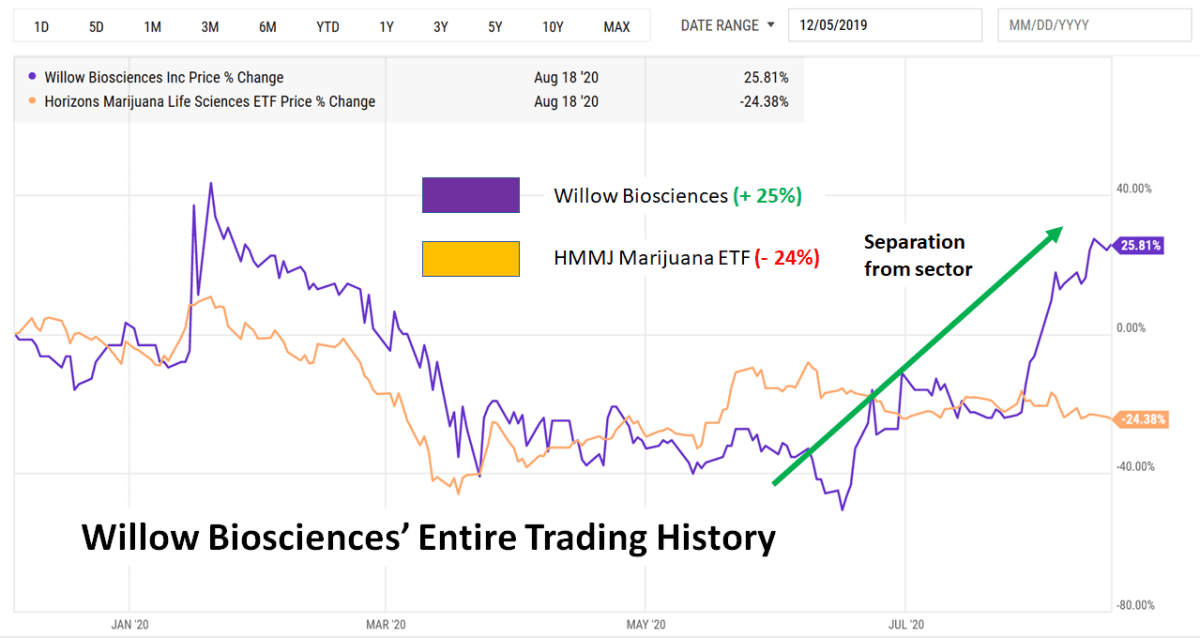 A site-visit to Willow’s production center is not going to have you strolling through a fragrant field of undulating cannabis plants, kissed by the warm evening sun.

You’ll be in a lab, under fluorescent light, surrounded by scientists in white coats.

Since the beginning of 2020, Willow has filed multiple patent applications covering a diverse collection of more than 200 novel genes designed to increase cannabinoid production and purity in yeast.

“One 2019 study, by Green Entrepreneur, states that the cannabidiol edibles market will be worth $4.1 billion per annum by 2022,” states High Times, “The sale of CBD chocolates and gummies alone surpassed the billion-dollar mark in 2018”.

This is the pointy end of the cannabis business.