Why did Buffett do a U-turn on gold?

My mother (RIP) had a sharp antipathy toward the American actor Kevin Costner.  “He’s limp,” she insisted, “he’s barely there, I suspect he’s been castrated.”

Today the internet detonated with the news that Warren Buffet just purchased 21 million shares of Barrick Gold (GOLD.NYSE) in Q2, 2020.

For a heavy-hitter like Buffett, this is not a big bet (GOLD comprises less than 1% of Buffett’s portfolio), but it’s still an astonishing U-turn – as though my mother woke up one morning and delivered a fawning monologue praising Costner’s macho performance in Waterworld (1995).

Like my mother’s sour take on Costner, Warren Buffett’s disdain for gold has been a constant for decades.

“Gold gets dug out of the ground in Africa,” stated Buffett in 1998, “Then we melt it down, dig another hole, bury it again and pay people to stand around guarding it. It has no utility.”

“Gold would be way down on my list as a store of value,” stated Buffett in 2005.

“Dumping bank shares and investing in a gold miner? It certainly doesn’t sound like a Warren Buffett move, but that’s exactly what the investing guru’s company did in the second quarter,” states Bloomberg, “It’s not a good sign for markets.”

“Buffett was there to boost [banks] during and after the last crisis, and he’s remained a top shareholder in most of the big U.S. banks,” continued Bloomberg, “That’s why it’s so jarring that Buffett’s Berkshire Hathaway sold 62% of its stake in JPMorgan (JPM.NYSE) Chase and cut 26% of its Wells Fargo (WFC.NYSE) holdings”.

Buffett has simultaneously reduced his position in other financial-services firms including PNC Financial Services, M&T Bank, Bank of New York Mellon, Mastercard and Visa while dumping most of his Goldman Sachs shares in Q1, 2020.”

Although Buffett has cooled on banking and airlines, until recently he remained a champion of the American economy.

“Nothing can basically stop America,” stated Buffett at a virtual shareholder meeting this summer. “The American miracle, the American magic has always prevailed and it will do so again.”

“Buffett’s opinion (about the resiliency of the U.S. economy) has been right for six decades.  Why wouldn’t it continue to be right?,” we asked on May 4, 2020, “Three reasons: debt, debt & debt.  America is broke”.

“Current policies add up to a 2020 budget deficit totaling between $4 trillion and $5 trillion,” stated Bloomberg, “Which would equate to roughly 20% of GDP. That’s more than twice the size of the largest deficit run by the Obama Administration.”

According to mining Legend Frank Guistra, Buffett may be finally getting the message that all is not well in the U.S.A. 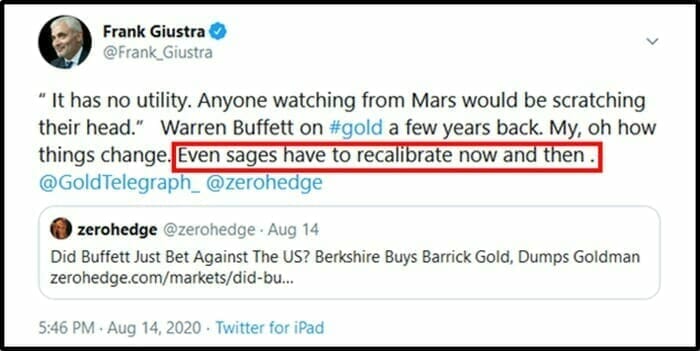 Buffett’s stake in Barrick Gold is valued at about $600 million, a small position for him – but it does signal a change in his thinking:

“Berkshire recently sold about $13 billion of stocks when one would expect Buffett, a stalwart believer in the U.S. economy, to go on a buying spree,” recounts Bloomberg, “It’s not as if Berkshire needs the cash — it had a mind-boggling $147 billion as of June, 2020”. 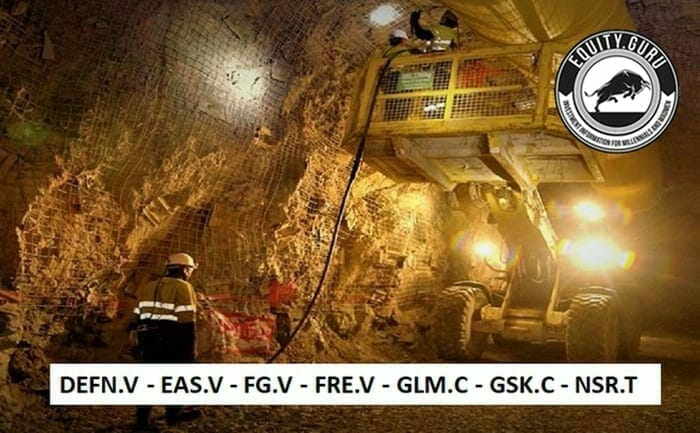 “It’s hard to recall exactly why Waterworld, which hit cinemas 25 years ago this week, ended up being one of the worst Hollywood turkeys of all time,” states the Guardian, “Maybe it’s because Kevin Costner’s taciturn acting style was unsuited to such an over-the-top adventure.”

It’s too late for my mother to reconsider her opinion on Mr. Costner.

Warren Buffett (89) is still alive and kicking and smart as whip.

For the first time ever, Buffett has changed his opinion about gold.

That will have no material effect on the operations of gold miners, but today a few Buffett-fans may be wondering: is gold really just “an expensive pet rock”?