If you’ve forgotten that Nexus Gold has projects in Africa, you are forgiven.

As well as five West African-based projects, Nexus controls the New Pilot Project in BC, four prospective gold and gold-copper projects in Newfoundland and the McKenzie Gold Project in Red Lake, Ontario.

The last four Nexus’ press releases have updated the market about the McKenzie Gold project.  We’ll circle back to McKenzie in a minute. 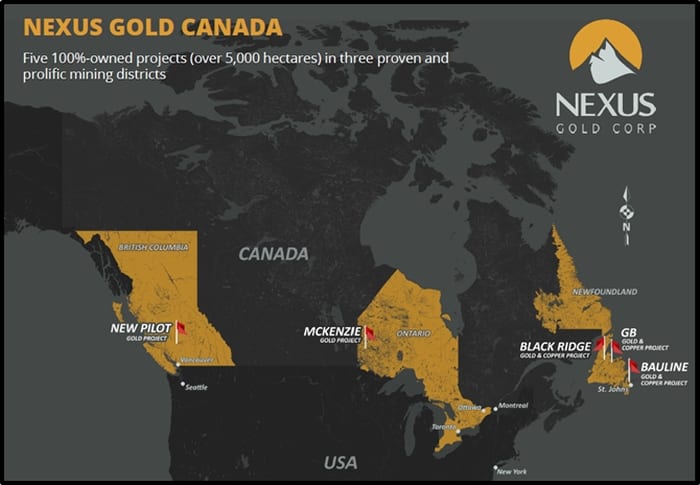 We believe Gold is at the very beginning of an upward macro trend.

Within that macro-trend, there are smaller trends, harder to see, but potential wealth-creators if you have an investment strategy to exploit them.

One of those micro-trends is diminishment of South Africa as a gold super-power.

Over the last 120 years, South Africa has produced half the gold ever mined on earth. But all good things must come to an end. The majority of South Africa’s gold mines are sub-economic at USD $1,700/ounce gold.

Gold’s contribution to South Africa’s GDP is currently around 1%, down from 4% from its peak 35 years ago. South Africa’s gold industry has shed 400,000 jobs in the same time frame.

That moves Burkina Faso in a good position to take over the mantle of Africa’s next hot gold producer.

Burkina Faso is one of the poorest nations in the world.  Its people are famously community-minded.  Do not mistake generosity and poverty for stupidity.

Along with the normal geological and financial risks, Burkina Faso – the country – has political risks. It’s often in the headlines for the wrong reasons.

Most of the country’s violence is attributed to the jihadist group Ansarul Islam – who have sworn allegiance to Al-Qaeda. They typically operate in the north and the east, away from Nexus’ projects.

Let’s side-step the political and religious rabbit hole and cut to the chase: is it possible to operate a profitable gold mine in Burkina Faso?

The answer is “yes”.

Endeavour Mining (EDV.T) – a $3.6 billion gold miner – is operating the Houndé and and Karma gold mines in Burkina Faso. EDV’s 2019 Burkina Faso revenues were about $600 million. The Karma mine is right in the same neighbourhood. 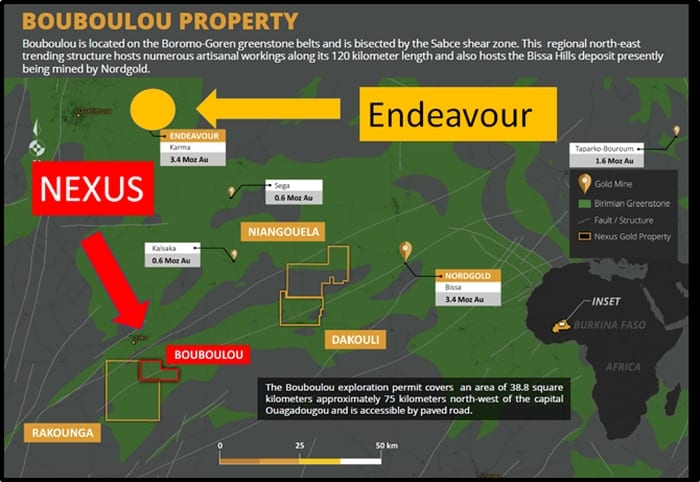 “Warren Robb, Nexus VP of Exploration had his sights set on Dakouli from the get-go,” states Equity Guru’s Greg Nolan, “For those unfamiliar with Robb, he was Roxgold’s chief geologist in 2012 where he supervised exploration on the Bissa West and Yaramoko gold projects.

Artisanal miners on the property are working a strike of roughly 400 meters and going down 80-plus meters.” – end of Nolan.

Nexus geologists reviewed the Dakouli concession for potential drill set ups, and during recent site visits noted an increase in artisanal mining activity along strike at the main mineralized zone.

A result of 10.8 grams-per-tonne gold was returned from sample DK-27.

This sample consisted of crushed mined material which had undergone preliminary gold extraction by panning.  The remaining two samples were taken from workings proximal to the location of the artisanal operations and returned 0.02 g/t au and 1.6 g/t Au respectively.

“The increased strike activity has extended the limits of the eastern zone some 200 meters to the east, thus expanding the zone of mineralization to over 400 meters along an east-west trend while also measuring over 200 meters in a north-south direction,” states Nexus, “As the Company prepares for an upcoming drill program it will continually monitor the increased artisanal activities along this mineralized trend”.

“Dakouli remains a priority for Nexus, and one we intend to drill as soon as possible,” stated President & CEO, Alex Klenman.

In late 2018, a total of 12 samples were taken from the Northeast Zone, obtained between 8-18 meters below surface from artisanal shafts and pits, with six returning significant grades between 2.90 g/t Au and 29.5 g/t Au, including 27.5 g/t Au and 12.4 g/t Au from samples containing visible gold.

In the following excellent “Crux Investor” interview, Nexus CEO Klenman answers a series of hard-ball question about his vision and business objectives for Nexus.

“We’d like to get a drill program done once the rainy season ends later in the summer,” stated Klenman, “The mineralization is widespread and continues to produce double digit samples.  We feel the upside here is clearly evident, and a compelling case for multiple drill programs has already been established.” 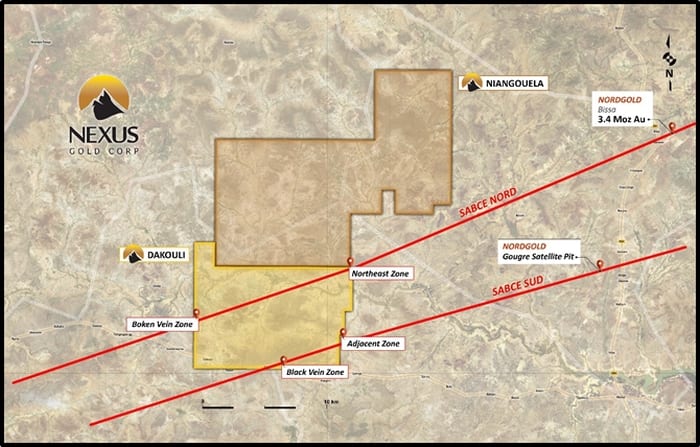 Meanwhile, the Canadian projects are not being neglected.

Three days ago, Nexus reported that phase one drilling has begun at the company’s 100% owned McKenzie Gold Project, located in Red Lake, Ontario.

The initial phase one program will consist of a minimum of 1000 meters of diamond drilling.

The initial drill program at McKenzie is designed to expand on 2005 drilling and to follow up on these anomalous rock samples.

For a company with a modest market cap ($9.5 million) Nexus has a good track record of advancing multiple projects simultaneously on two continents (North America and Africa).