On May 28, 2020 the short seller J Capital Research, issued a negative report on NovaGold (NG.T) claiming that “For the last 15 years, NovaGold’s management team has systematically misled investors with subjective presentation of information about a deposit so remote and technically challenging that the mine will never be built.”

“Executives are evasive when analysts attempt to pin them down on timing for further development,” claimed J. Capital Research.

“Our strategy is not to make any wine before its time,” pontificated Kaplan on October 3, 2018, “A wise man once told me that these kinds of assets are rarer than hens’ teeth.”

“My sense is that the moment will come in a not dissimilar way to the way that Justice Potter Stewart when answered the question, ‘How do you define pornography? I can’t define it, but I know it when I see it’,” mused Kaplan on April 2, 2020.

These cherry-picked quotes made Kaplan look like a fruit cake.

In fairness, the answer to a metals-analyst “when-question” should never include allusions to wine, chickens or pornography (a date would be more instructive).

“Under normal circumstances, a sloppy and truly meretricious report would not be met by a corporate response,” huffed Kaplan on May 29, 2020. “We believe that our shareholders are far too well-informed and knowledgeable about our Donlin Gold project, our integrity, and competence to take this report seriously.”

Unfortunately – for Kaplan and other NovaGold stakeholders – some investors did take the negative report seriously. 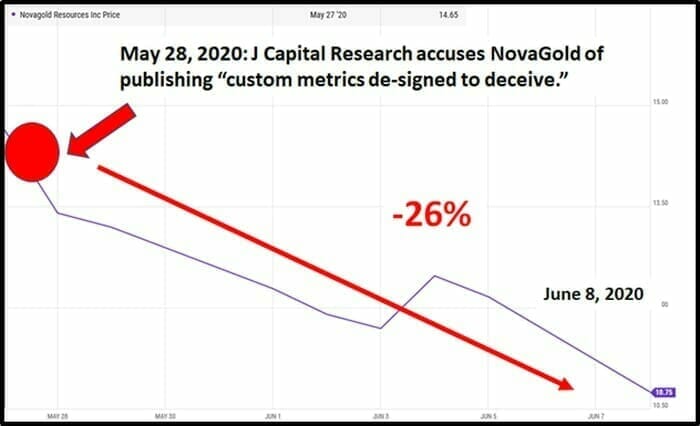 In the meantime, it is “exploring all of its legal options in various jurisdictions against J Capital Research and any other parties who may be complicit in any effort to manipulate NovaGold’s share price.” 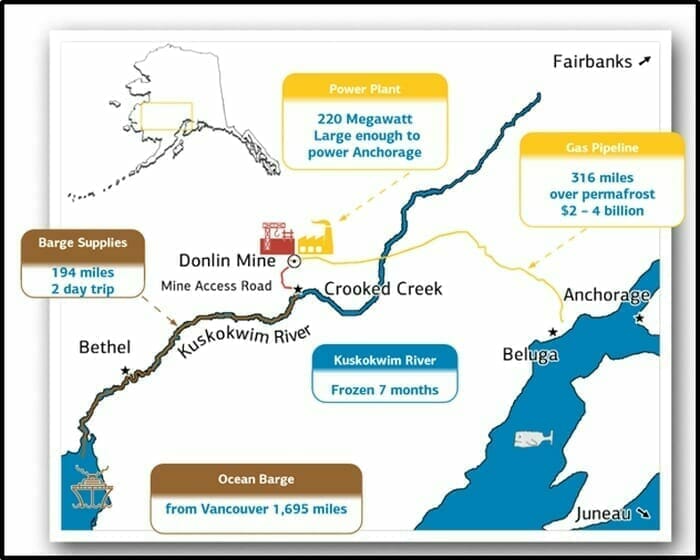 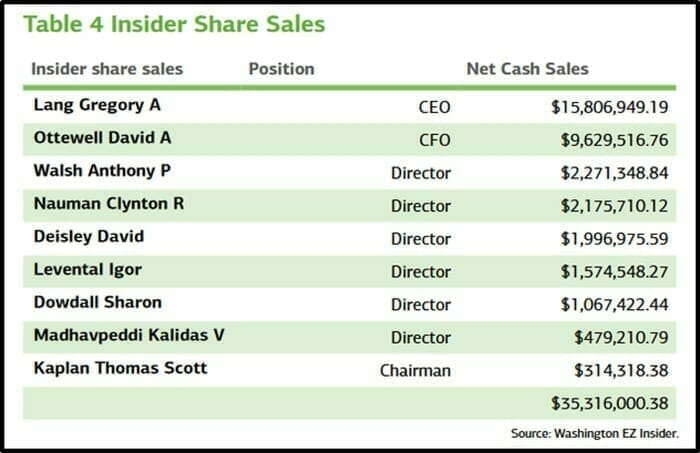 Note here that Kaplan sold less stock than the other listed insiders.

On June 08, 2020 NovaGold released a comprehensive response addressing “the multiple misleading statements”.  It accused J Capital Research of “masquerading as a research firm, perpetrating what is known as a short-and-distort scheme”.

What’s notable here is the NovaGold complains about J Capital Research’s “distortions” but doesn’t go so far as to assert that the report is “false”.

In hindsight, at this point, it might have been better for the management team to wander off and lick its wounds.

But in a separate June 8, 2020 press release, NovaGold’s Chairman Kaplan decided to weigh in.

If Kaplan’s primary objective was to show that he wasn’t a fruitcake – the 11,000-word clap-back got off to a bumpy start.

“On Thursday morning 10 days ago, I was enjoying a particularly sweet moment, savoring a fine cup of Nespresso’s (now discontinued) Ethiopian Yirgacheffe-origin coffee – my favorite,” recounted Kaplan, “The mood was actually upbeat as my older son had narrowly avoided a ruptured appendix.”

“My tranquility was suddenly broken by a flurry of e-mails from friends and colleagues. Had I seen the “hit piece” on NovaGold?” recalled Kaplan, “I had not. When I read JCAP’s report, my first reaction was to chuckle because the piece was clearly so fallacious that I initially assumed it had been written by a child”.

This was a not a good beginning.

The J Capital Research report may be bullshit.

But it is – without a shadow of a doubt – well-written adult bullshit.

“Being held to account is something we welcome – and in fact always will. We just love it,” stated Kaplan, who went on to point out that the J Capital Research report conflated two eras of management.

“We entered the scene and began fixing it in 2009 as a white knight, and turned the company completely around after taking over management in 2012,” stated Kaplan.

Kaplan has a valid point.

If you take over management of a car-wash from a man who is later accused of shoplifting, that does not make you a petty thief.

The J Capital Research report should have focused its criticism on the purported sins/blunders of the current management.

“One can easily imagine the shock to our management team,” mused Kaplan, “It was hard for us to even find an analogy. A “sucker punch”? It sure qualified, but these can happen even among friends in a moment of weakness. So that did not seem strong enough. A Clockwork Orange-inspired, financial adaptation of the so-called ‘knockout game’? Perhaps equal in savagery, but also senseless.”

So much to unpack here.

Generally, friends do not “sucker punch” each other in “moments of weakness”.

“In the ‘Knockout Game’  the attacks are random, and the goal is to knock a victim unconscious with a single punch,” stated The Leader.

As with wine, chickens and pornography, Kaplan fouled up his metaphor.

There was nothing “random” about J Capital Research’s negative report on NovaGold.

It was a surgically targeted attack.

“If good companies and honest managements can be impugned in such ways as we are experiencing,” complained Kaplan, “then we have something of a moral, or at least civic, responsibility to do unto them as they would do unto us.”

Note to Kaplan: you can’t short a short-seller.

On June 8, 2020, the collective wisdom of the market listened to Kaplan’s clap-back and said, “Humph”. 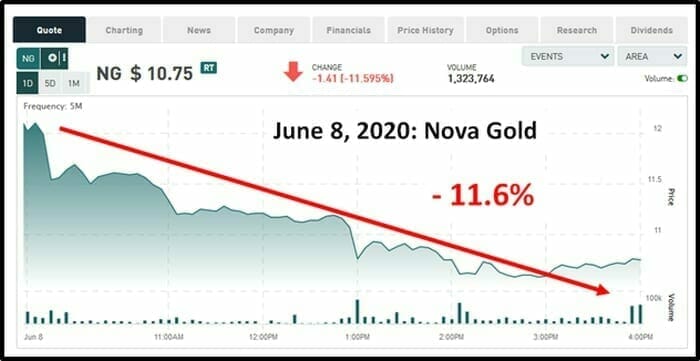 “We are investigating a potential securities class action against NovaGold and its directors and officers,” stated Kalloghlian Myers LLP a Toronto law firm specializing in class actions, “If you are a NovaGold investor, please email me at garth@kalloghlianmyers.com”

“NG needs to flush out any email campaign JCAP has undertaken,” advised POG1200 on an investor bull-board, “A sudden, email receipt of bad news on a share you hold can cause the panic-sale a short-and-distort seeks. The internet can’t be taken down.”

“NovaGold remains the preeminent “gold in the ground” development stage asset, highly levered to the price of Au,” countered Eric.

“Ideally, we see a bear trap flush out below the 200 DMA briefly,” continued Eric, “where GIL readers should have their catcher’s mitts on, and are ready to scoop up stock.”

“Seeking retribution for life’s inevitable disappointments is simply pointless,” reflected Kaplan on June 8, 2020, “Doing so would not give me more time with my wife and children, or any of the myriad other pursuits that give my life both purpose and joy. And, in any event, the world needs more kindness, not less.”

This is true, although it may not calm the anxieties of NovaGold shareholders wondering if the Donlin Gold project is legit.

To date – Barrick Gold (GOLD.NYSE) – the project co-owner – has made no public statement on the negative research report by J Capital Research.