I have a list of companies that want me to write about them that, for the last few years, has never got to an end. Heck, the list of companies that’ll pay me to look at them rarely gets to zero, and they take precedence over the freebies. So when I spot something in the wild that people are talking about but isn’t on one of those lists, it may take me a while to get around to seeing what all the fuss is about. Powerband Solutions (PBX.V) has been showing up a lot in my social media timelines for a while now, touted by folks I know and sometimes even trust, so I thought I might as well set aside some quarantine time to look it over.

Powerband is one of those deals that defy a quick and easy explanation, which probably takes it out of the wheelhouse for about half of the potential investor market out there. A tool for leasing cars? A platform to allow for faster auto sales/leasing/inspecton approvals? Or, as the company puts it in their prestenation, “an online consumer-directed marketplace for consumers, dealers, manufacturers, and lenders to complete automotive transactions.”

No, me either, but stick with me here because there’s meat on the bones.

Basically, Powerband is gunning for those of us who’d like to buy a new or used car, but think car dealerships are, to paraphrase Hunter S. Thompson, “a cruel and shallow money trench, a long plastic hallway where thieves and pimps run free, and good men die like dogs.”

That’s all of us, right?

No, I don’t want the rust-proofing, or the simonizing, or the simonizing-proofing, or the extra two years of warranty, or the premium warranty because apparently the regular warrranty doesn’t cover shit. My last car dealership experience involved them literally hanging on to my car keys for FIVE HOURS under the pretense they had to move my car to get at another car, and hey, would you like to see a more expensive model in the meantime? Maybe you’d like to drive the sports model? How about a rear wheel drive in Fiji blue?

At the end of the process, I was told I couldn’t have the 0% interest car loan they’d been telling me I was sure to get all day “because nobody gets refused unless their finances are ridiculously bad.” Because of an argument I’d had with my credit card company over a $21 charge three years earlier, I’d have to settle for 4.99%, like some sort of meth head.

So if I can avoid darkening the door of a car dealership again in my life, I’m all in. Tell me where to go, what app to install, what button to press.

In short, Powerband is made for me. 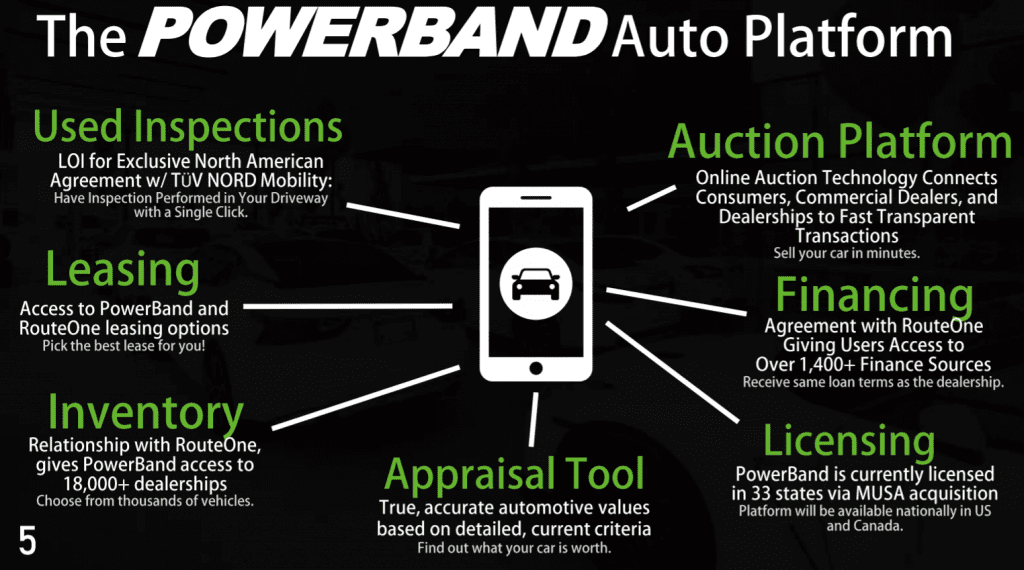 There are a few different aspects of Powerband that have revenue potential, and if they were actually helping me keep my staff paid through COVID season I might go into them all, but for now I’m going to stick to what I think is the highlight, and that’s the leasing platform. 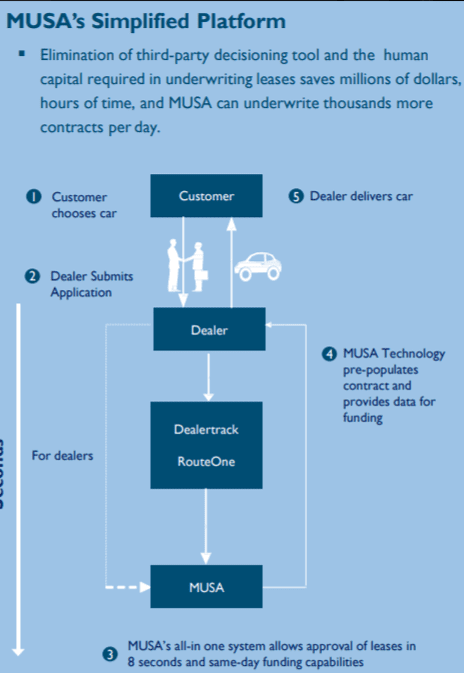 Currently, getting an auto lease approved at a dealership involves a lot of people, each of which involves a delay in getting the deal signed, and all of which cost money. Using Powerband, the process is faster, cheaper, less cumbersome, and removes a load of opportunities for the customer to chicken out.

How fast is Powerband’s process? This fast.

To build up their offerings and jumpstart their platform, Powerband purchased MUSA Auto Finance LLC, which has a network of 500 dealers and was Tesla’s first non-captive leasing partner. MUSA is licensed in 33 US states to do business in the auto field and has processed over 3,000 leases in short time. It owns the tech that allows for the underwriting, funding, and delivery process of a leased car in minutes. That deal cost Powerband around $700k in cash and stock at today’s prices, which makes it a pretty damn cheap sector buy-in.

Subsequent partnerships with RouteOne LLC and TÜV Nord have brought 18k dealerships, 1400 financing sources, and the ability to perform home-based car inspections into the mix.

That left one remaining problem for Powerband; that in order to offer a load of credit to auto consumers, one needs a load of credit at hand. That’s where a strategic investment by Texas-based auto warranty and insurance giant D&P Holdings of US$12.5m. D&P adds another 500 dealerships to the Powerband network.

Q1 and Q2 should see the system launched in beeta form in USA and Canada respectively, with US rollout a quarter after that.

The board and management team have all the experience you’d be looking for to set something this large up properly – so why is the stock not booming? 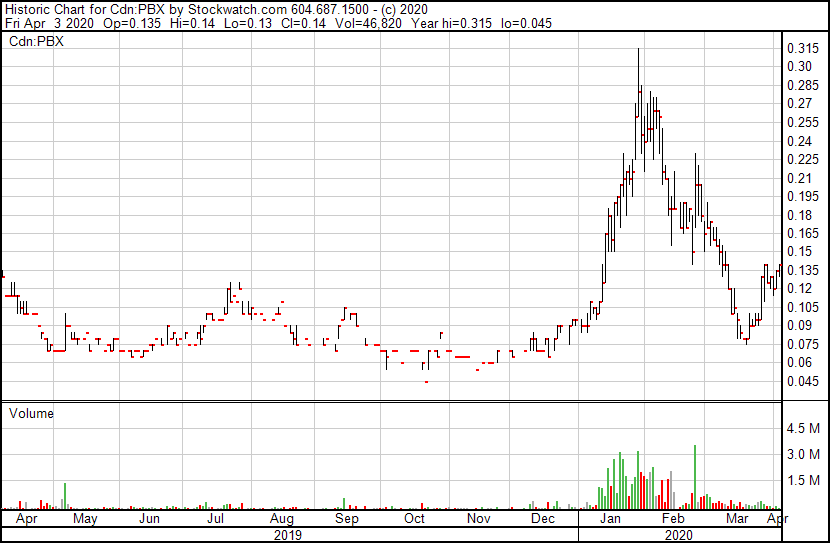 Well, it did for a bit in January, jumping from $0.075 to $0.315 in a hurry, before profit takers kicked it back down over the following month. Though the stock has worked hard to go on a near double from that $0.075 downside in the last few weeks – no small feat in the midst of an economic collapse – the group does have a tendency to toss stock and warrants about pretty freely, so there’s perhaps some concern in some quarters about dilution of the share structure, and there’s another concern that, frankly, I had for a while until I actually bothered to get a good look under the hood… the fear that, when a lot of guys on Twitter are talking about it everyday, and the stock price has been all over the place in a short time, that perhaps this stock is being pushed a little too hard.

For a long time this was an illiquid $0.06 stock, so the sudden craziness in its charts from early 2020 will play well with an investor who likes a gamble, but might scare away the long term holder that the company’s business plan actually merits.

That said, if I look back to the beginning of the Powerband adventure, a lot of the plans the company has laid out have been achieved in the time since and, there’s no doubt, during this period of social distancing, with auto dealers everywhere advertising that they’re allowing online ‘no contact’ purchases, what Powerband is looking to put together has immediate market need.

If I were jumping in right now, I’d only be comfortable in doing so if I was okay to sit on the stock for a decent period and forget the daily ups and downs of its share price. There’s a business here, and at a very reasonable current $15 million market cap, PBX looks like a good ‘buy it and forget it’ option to me.

As the story progresses, however, this market cap might not make much sense for long.