Three months ago, I wrote about a drone company called Draganfly (DFLY.C), which had just landed on the exchange as a newly listed public company. Drones have been out of favour as an investment for a while, having had a sparkling run a couple of seasons back when everyone’s kid got a followbot for Christmas but not exactly having turned it all into profits to date.

As happens sometimes with new companies, Draganfly took a dip in its first week, which led some to do the usual thing of criminalizing any sort of downward stock movement as a ‘dump,’ to be yelled about from the rooftops.

But Draganfly didn’t roll down to $0.08. Rather, it lingered around $0.60 for most of the last three months as decent news began to pile up, reflecting the US government’s moves to ground China-based drone tech, a situation that puts DFLY right in the frame as one of the only companies institutional drone users could come to.

Over the last week, that coiled spring began to fire. 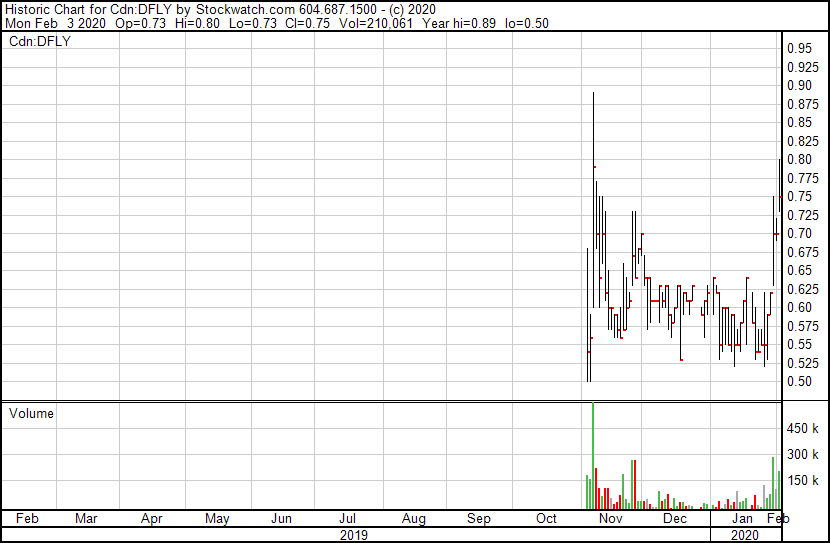 That’s a pretty good run, and one that the regulators down south duly took note of.

Draganfly Inc. is not aware of any material undisclosed information […]

This is how most news releases on the topic of why a company has had a big stock run start out.

But Draganfly added some colour to this release by outlining a lot more detail about promotional activities by the company.

[…] and wishes to make the following statements regarding recent sponsored news and marketing activities concerning its shares of common shares traded on the OTCQB market.

On January 30, 2020, OTC Markets Group (“OTC Markets”) sent the Company a copy of a promotional newsletter published by Financial-News-Now.com on January 22, 2020 (the “Article”) and requested comment from the Company. The Article sets out recent current events in the UAV and UVS industry, a description of the Company’s business, and matters relating to investment in the Company. This is a third party utilized by IDR Marketing. Inc. (“IDR”), which was retained by the Company to assist with financial marketing efforts in order to increase investor awareness within North America.

Usually, when a company lays out its promo plan in full like this, it’ll end up with some sort of statement about how things got out of their control and they regret things said were excessively promotional.

The Company recognizes that the Article coincided with higher than average trading volume in the Company’s common shares and believes that activity can fairly be attributed to several factors, namely, its announcement of the acquisition of Dronelogics Systems Inc. (see press release of the Company dated January 16, 2020), the subsequent news flow of some material advancements of the Company’s business plan (see press releases dated January 22 and January 30, 2020 ) and the initiation of a broad investor awareness campaign undertaken by the Company […] The Company was aware of the Article before receiving it from OTC Markets. […] IDR’s engagement was to factually tell the Company’s story in an accretive and transparent manner. Statements made in the promotional materials are not materially false and/or misleading. The factual information provided in the promotional material, which was extracted from the Company’s public disclosure, our website and press releases, is accurate.

TL/DR: We did promo, it wasn’t bullshit, and it worked.

They’re also making moves, picking up an acquisition of a 10-year-old drone tech firm for $2 million.

Dronelogics has been growing steadily with revenues in excess of $3-million and expected 2019 year-over-year growth of 20 per cent. Draganfly management believes the transaction will generate combined pro forma revenue of between $6-million to $7-million for the fiscal year 2020, representing an increase in Draganfly’s revenue of between 23 per cent and 43 per cent.

…and they’ve been building out their tech.

Draganfly’s wholly owned subsidiary, Draganfly Innovations Inc., has developed these new payload options in collaboration with research experts in the agricultural and water resources fields. These new camera packages, which have been added to Draganfly’s existing product line, are intended to increase efficiency and improve the spatial and spectral quality of actionable data collected.

Draganfly has over 21 years of experience providing in-depth flight and system training worldwide and offers in-person flight reviews for the Transport Canada advanced operations drone pilot certificate. This certificate ensures that a drone pilot is able to competently operate within the regulations and safety standards implemented by Transport Canada. All remotely piloted aircraft (RPA) pilots must comply with these rules and regulations.

I’ve been in and out of this stock a few times over the last few weeks, and like where it’s going now. The word is clearly out and the company is earning it’s stripes.

For mine, if you think war is looming and Presidential madness is constant and the next big loading up of budget on the US military will include big cash for drone equipment, you don’t have to buy but there’s honestly just no excuse for not at least having DFLY on your watchlist.

FULL DISCLOSURE: Not a client, but watching closely.