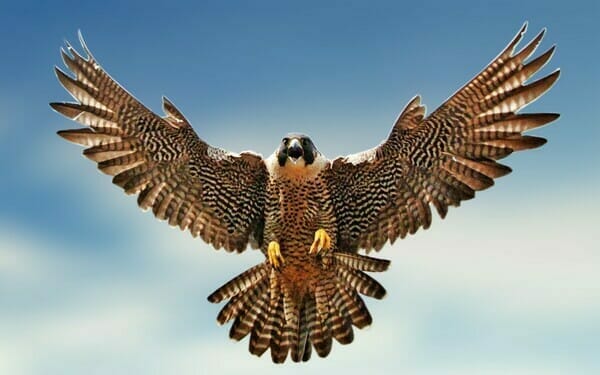 The Cusp, the little Birds, the Falcon (FG.V)

Since our last dose of bullish commentary a few sessions back, the precious metal is still consolidating its dramatic gains registered earlier in the summer, but is in the process of testing higher ground, trading near the top of its range. 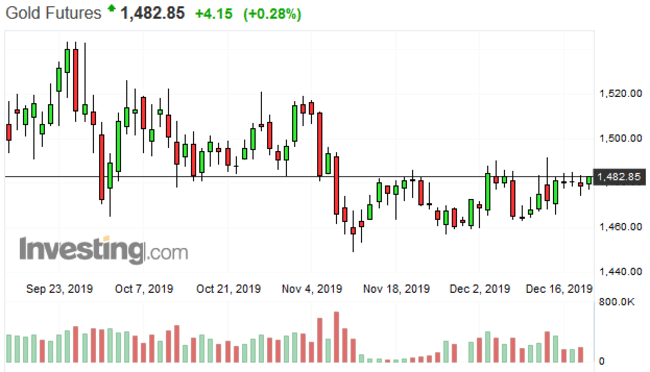 In a recent Guru offering, we detailed many of the underlying fundamentals supporting the metal.

We highlighted the fact that central banks are currently consuming 1/5th of the global gold supply, having added 156 tons of the precious metal to their reserves in Q3 of 2019. Think about that for a minute (gold is the ultimate hedge against uncertainty).

Do these bankers know something we don’t?

From their slightly elevated vantage point, can they see a little further down the road than the rest of us? 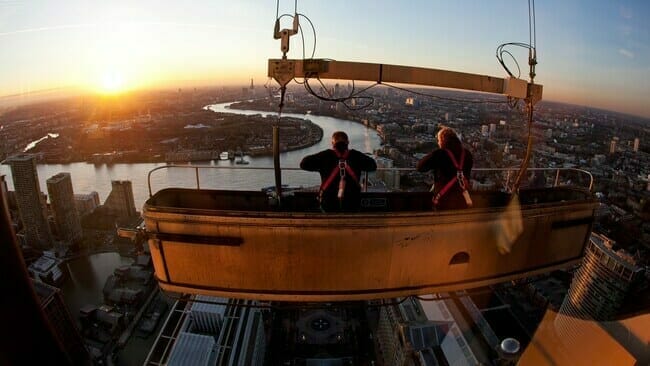 What has a lot of smart money types worried is the near-certain demise of Deutsche Bank. Are we about to experience another “Lehman Brothers moment”?

Ya see, these… these are the questions (Peter Griffin voice).

It’s no mystery that assets and liabilities are intertwined to the extent that if one bank fails, it could trigger a processional effect that takes down the entire global banking system.

That’s no exaggeration. It nearly happened in 2008.

These are unprecedented times—uncharted waters, if you will.

As we averred earlier, gold is the ultimate hedge against systemic risk. It might best be viewed as accident insurance.

I think these are unlikely to be good real returning investments and that those that will most likely do best will be those that do well when the value of money is being depreciated and domestic and international conflicts are significant, such as gold.

It’s difficult to imagine a scenario where gold won’t outperform most other asset classes as we limp into the next decade.

Stepping back in time

In the 1970s, gold went on a serious tear due to the collapse of Bretton Woods and an inflationary spiral that impacted everyone on the planet. I was too young to appreciate the event, but I heard John Embry retell stories of gold equities going on mind-blowing winning streaks, registering 25% daily gains as a matter of routine.

There are even stories of non-gold equities that participated in the rallies for no other reason than having the word “gold” in the company name.

Then, beginning in the early 1980s, gold was given the ol what-for.

General equities were suddenly the place to be. 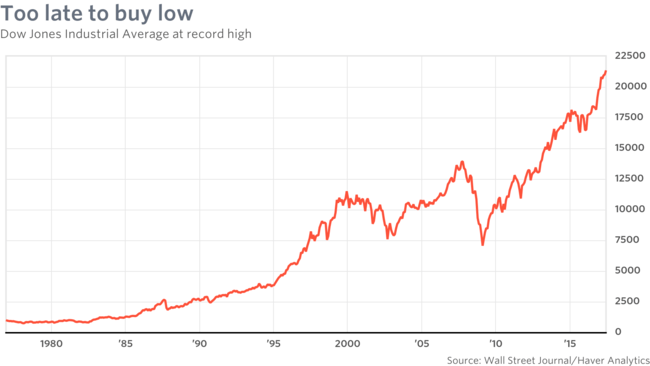 It was a bad time to be a gold bull for most of the 1980s and 1990s. The U.S. economy flourished. The greenback asserted its role as the world’s reserve currency. Aside from a few pops here and there, gold ground lower and flat-lined.

Then, beginning in the early 2000s, confidence in the U.S. economy and the greenback began to wane.

Cracks appeared in the system.

Gold’s upward trajectory during that period of protracted uncertainty was nothing short of jaw-dropping.

I suspect we’re on the cusp of a similar type bull run in the metal, except this time, it could blow away all reasonable expectations. Yep. Guilty. I’m a tad bullish over here.

Sensing that we’re on the verge of a powerful turn in all things gold, savvy management teams in the junior sector—those sitting on geologically prospective assets—are making plans. They’re pushing in roads and permitting drilling sites. They’re running geochem and geophysics over their flagship projects. They’re looking to mobilize a drill rig the moment the market rediscovers their stock.

Falcon Gold (FG.V), a company recently covered by Equity Guru’s Chris Parry, is one such junior preparing for what could evolve into an epic bull market run. 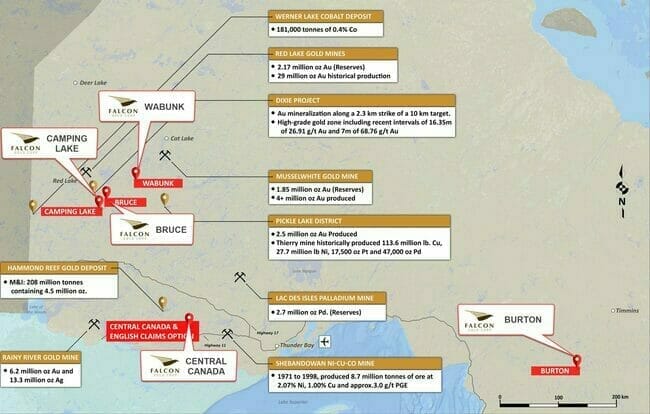 Having raised just over $100k via a flow-through (FT) financing—money that needs to go directly into the ground according to FT rules—the company’s flagship Central Canada Project stands to benefit.

“Falcon has applied for an exploration and drill permit to go after gold/silver and copper/cobalt prospects on its Central Canada project. They’re looking to work approximately 20 drill pad locations with overburden trenching and geophysical surveys ‘to test historic prospects and expand the company’s economic geology understanding.’

Translated into non-geo speak: They’re going to drill holes around where previous mine owners have drilled before, to confirm the historic drill data they already have, which isn’t usable for an NI 43-101 resource until it has been updated.”

Central Canada is a large project—some 3,200 hectares—with multiple occurrences of mineralization in a variety of geological settings.

The region has a long history of mining. 20 kilometers to the southeast is Agnico Eagle’s (AEM.T) Hammond Reef gold deposit (measured and indicated resource of 4.5 million ounces of gold).

Directly adjoining Central Canada is the historic Sapawe Mine that produced 4,547 ounces of gold and 1,315 ounces of silver from 33,013 tonnes of material. 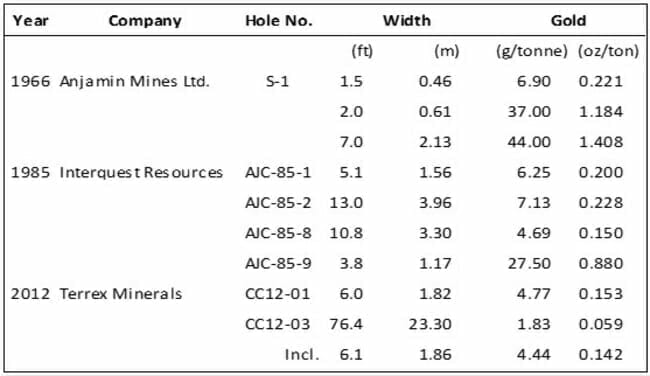 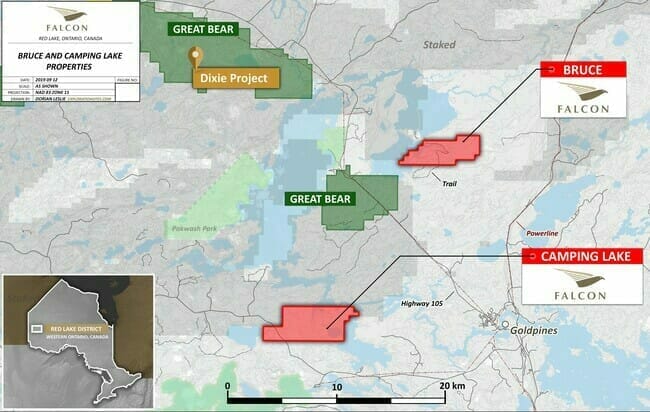 The Bruce Property is located roughly 20 kilometers southeast of Dixie.

As highlighted in a previous Guru offering, Falcon wisely optioned out a 51% interest in Camping Lake to International Montoro (IMT.V) for 1.5 million IMT shares and work commitments totaling $300k.

Back to Parry’s recent article:

Expect newsflow from two very decent jurisdictions in the weeks and months to come. There’s also the possibility of new acquisitions and partnerships in the offing.

Falcon has a market cap of $2.4M based on its recent sub-nickel close.