Close-ology is a mining term used to describe companies that are close to another company that is running red hot, and may justifiably make the case that they can be hot too.

Falcon Gold (FG.V) is close to a couple of companies that have had some very nice years, and Kalt has in due course sidled up next to them, hoping that someone might decide they need more land at some point down the road.

That’s the close-ology trifecta, when you’re at the big boy’s side door, and Kalt is at yours.

Truth be told, Kalt has probably spent more on his Amex staking claims on land this year than Falcon Gold would cost you to buy outright. It is the epitome of a small play.

$2 million market cap, some land that cost it five figures to grab when nobody realized what it might be, financings that are calculated in $50 increments… nobody is going to look at Falcon Gold and mistake it for, say, Great Bear Resources (GBR.V), which has been a four-bagger over the last year and raises money in the eight-figure range without too much trouble. 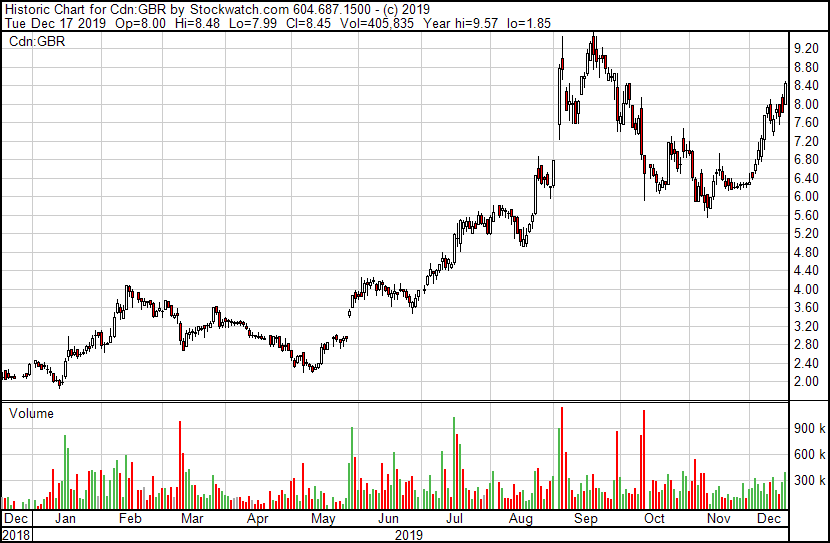 “We’re a small company, no question,” says CEO Karim Rayani, who has been putting deals and dealmakers together for several years before inserting his hand into Falcon.

“I was working with previous management and it’s just always heavy lifting taking a little fish like this forward. I saw an opportunity where, realistically, it was a blank canvas and where some hard work could pay off in a big way, so rather than help management here and there to defend my investment, I became management.”

And one of the biggest shareholders in the company.

“Though, to be fair, with a company this size that didn’t take a lot of buying to achieve,” he laughs. 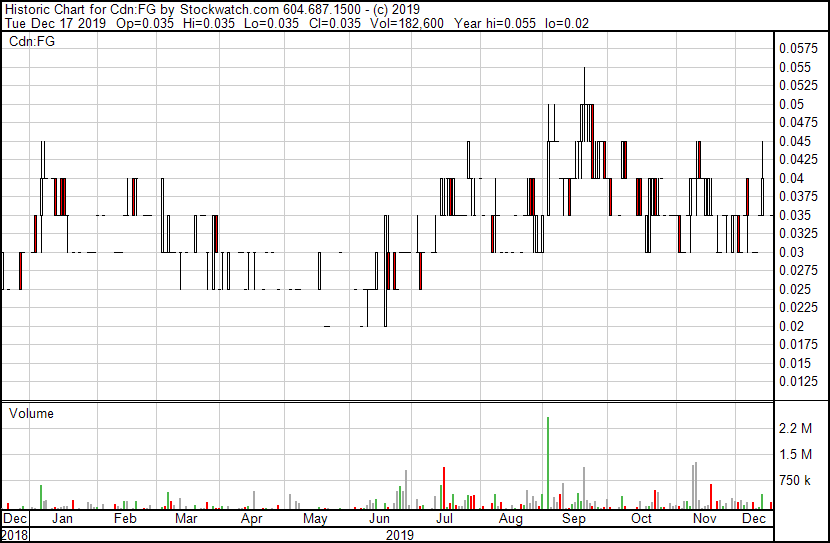 Though the valuation is small, cannabis investors would have loved it if their favourite investments held value as well as little Falcon did over the last year.

“I guess it’s the perk of being a small deal,” says Rayani. “You have time to do the work because, really, to move under a $2 million valuation you’d have to be bleeding in a ditch. Investors won’t stand around forever waiting, but every uptick is a big percentage move, and if you can string a few together there’s a real return potential for a microcap like this.”

For some, the tendency in the mining business would be to ‘play large’, to attempt to give the impression Falcon is a bigger operation than it is, but Rayani sees Falcon’s miniscule market cap as one of its biggest selling points.

“Look, we’re sitting here on land right next to Great Bear, which is worth $370 million and doing everything right,” he says. “A year ago that company had a cap of less than $100 million, so the return has been fantastic. But if I’m looking for a multiple on my money, if I want to place a small bet on something that could multiply in value on relatively small amounts of success and news, getting GBR to $740 million would take a lot more work and a lot more buying than getting Falcon to $4 million.”

That’s true. At the time of writing, $50,000 worth of buying at market prices would raise the price of Falcon Gold $0.03, effectively doubling its value. The same amount of buying on GBR would also raise it $0.03, upping its value by 0.03%.

A lot of people have made a lot of money on GBR, and rightly so, but the last four months have seen a lot of swings, up and down, as the company progresses works through a drill program consisting of 200,000 metres of drilling, which means a lot of results are coming, but that each of them has a smaller impact than the handful that will emerge from Falcon’s local property. Falcon has less potential to jump on a good drill hole, and so moves up more in line with the gold sector than day to day news.

“We’re different,” says Rayani. We’re determined to do the work, protect our cash, raise only when there’s need, and where that need will result in drills turning.”

Along those lines, the company recently raised $104,250 – 2 million shares at 5c a throw – which came from just four people. 25% of those were named Karim Rayani.

He ain’t kidding. The green blips on the FG insider trade chart below are all insider buys. 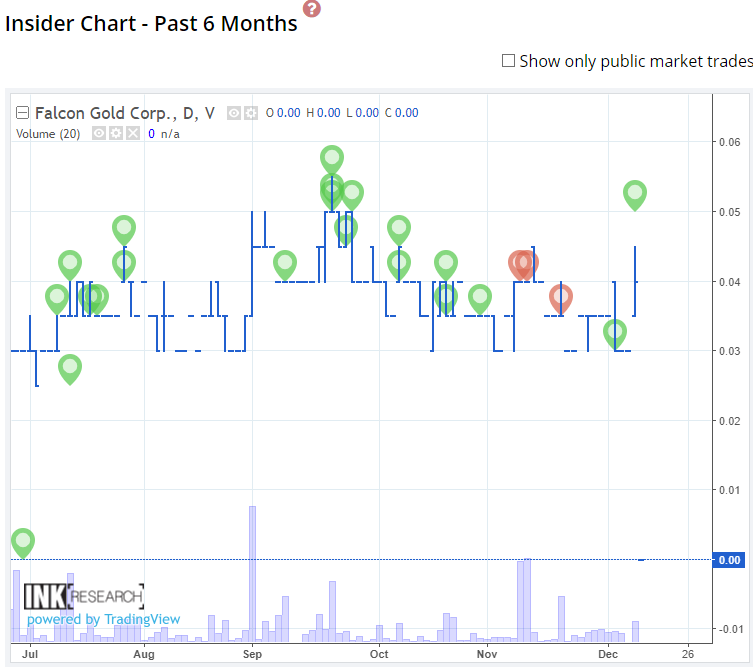 R7 Capital Ventures Ltd., an investment company wholly owned by Karim Rayani, acquired an aggregate of two million units, with each unit comprising one common share and one share purchase warrant of Falcon Gold Corp. for a two-year period at a price of five cents pursuant to a private placement. Mr. Rayani also acquired an aggregate of 360,000 common shares of Falcon Gold by way of series of open-market purchases dated Oct. 8, 2019.

You’ll note we haven’t actually got to the mining properties yet, and whether there’s anything in the ground. That’s also a curious peccadillo of the mining world – a lot of early rises and falls on a mining explorer happen independently of actual work being done on – or in – the ground. To that end, Falcon is defying expectations again. That hundy K they raised is flow-through money. That means it can’t go to people like me for consulting, or to Rayani for salary. It has to go into the ground. Work must actually be done.

Proceeds from the financing shall be used to incur Canadian exploration expenses[…] pursuant to exploration activities on its Ontario projects, focused on the Central Canada gold and copper projects in Atikokan.

Falcon has applied for an exploration and drill permit to go after gold/silver and copper/cobalt prospects on its Central Canada project. They’re looking to work approximately 20 drill pad locations with overburden trenching and geophysical surveys ‘to test historic prospects and expand the company’s economic geology understanding.’

Translated into non-geo speak: They’re going to drill holes around where previous mine owners have drilled before, to confirm the historic drill data they already have, which isn’t usable for an NI 43-101 resource until it has been updated.

Multiple gold, copper, cobalt and other metal occurrences have been discovered on the approximate 3,200-hectare property in a variety of geological settings — none of which has been sufficiently pursued to determine economic potential for mining.

Twinning historic holes is not overly exciting in that they’re unlikely to find anything they don’t already expect, but getting a 43-101 together quickly will help the company de-risk the operation and add value, and this is how you do make that happen. It’s a nice solid step forward, and evidence that this crew wants to actually do the work.

In the Red Lake district, that property we talked of by Great Bear, Falcon has opted to bring in a partner to do some work, rather than having to raise money with the stock at a cheap price, or split their capital between multiple assets.

International Montoro (IMT.V) will do $300k of drilling, cover land costs, and part with 1.5 million shares ultimately to earn their 51% chunk.

“We were very fortunate to be able to tie this ground up in one of the most active exploration regions in Ontario. We look forward to working very closely with International Montoro as their success is our success,” stated Karim Rayani, chief executive officer and director.

There are others, including one in South America, and they’re fine, but the partnering with IMT on the Red Lake property is indicative of where Falcon sees its future, and that’s the Central Canada camp.

Personally, I know Rayani is a dealmaker, so I’d expect some new assets, some flipped assets, and some partnering in the future. Falcon isn’t exactly a prospect generator, and it’s certainly not a property supermarket, where nothing moves but everything is for sale.

Rayani is doing the work. Falcon Gold is in play.