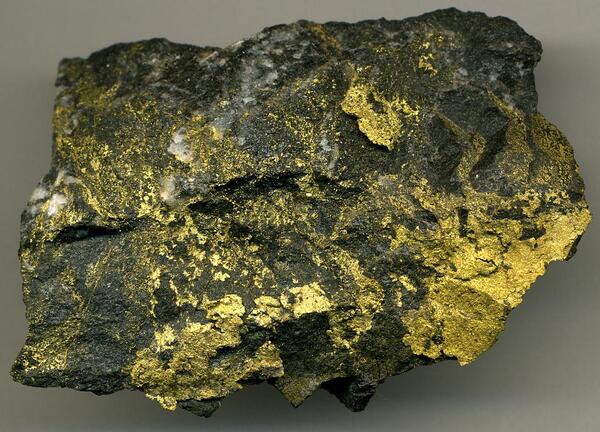 Nexus put out news loyal shareholders really wanted to see—a plan to mobilize a drill rig to the heart of the Red Lake Mining District. 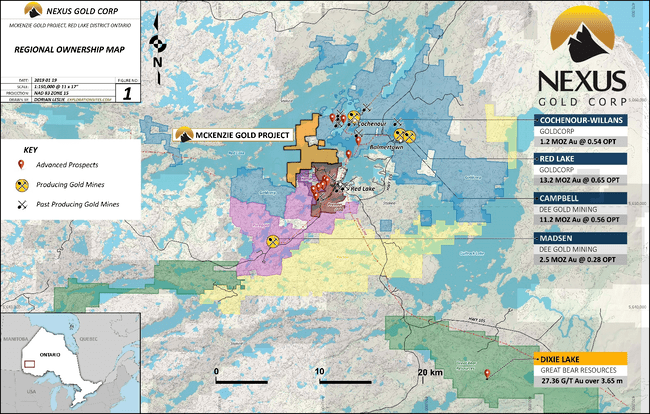 In the southwest corner of the island, a 12 cm wide, low-angle quartz vein exposed from the shoreline over a length of 2.0 meters produced high-grade samples ranging from 9.37 g/t Au to 331 g/t Au.

Red Lake is known for its narrow high-grade veins.

This discovery lies roughly 100 meters west of a historical showing that assayed up to 212.8 g/t Au.

Sampling along the north shore of McKenzie Island encountered quartz veining and sulphide mineralization that returned up to 18.02 g/t Au in grab samples.

Since acquiring the project earlier this year, the company busily put boots to the ground, systematically mapping and sampling the project producing a plethora of high-grade surface values. 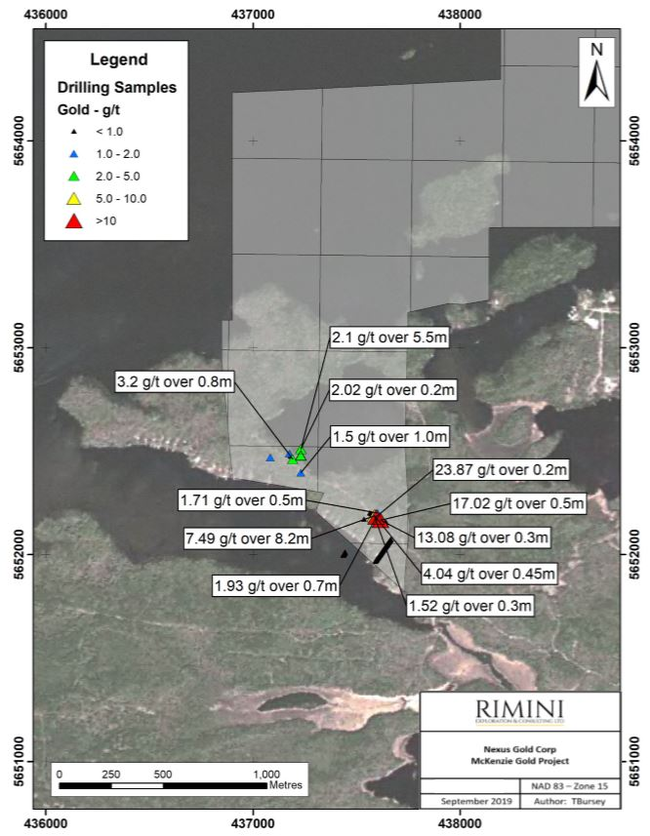 On Nov. 8, the company announced the completion of a phase-two prospecting campaign, collecting 60 grab and chip samples along the southern end of the property.

The focus of the prospecting was concentrated in and around Perch Lake, in the Saint Paul’s Bay area, located in the southernmost section of the 1,348.5-hectare property.

Noteworthy, this section of McKenzie is bordered by Premier’s Hasaga Property and Pure Gold’s Madsen Property.

Assays from this phase-two sampling program are pending.

Nexus has done some serious groundwork on the property, all designed to push McKenzie further along the development curve—to prioritize drill targets for a future drilling campaign.

Drill targets are being determined now and we are eager to begin that phase of development.

Music to a shareholder’s ears.

If you study the maps above, you’ll note that MacKenzie is divided roughly equal between land and water (Red Lake itself).

Rimini’s data compilation summary indicated that little to no exploration had been conducted over the actual lake portion of the claim block.

Regional data shows a number of northerly trending geophysical trends extending into the lake itself. The company views these trends as potential faults or breaks within the Dome Stock, a large granitic intrusive unit that runs through the heart of the Red Lake Camp.

“Preliminary review of lake sediment sampling conducted on the property in 1989 indicates coincidental anomalous gold geochemical values occurring. Historical values obtained from the analysis of +150 mesh screened lake sediment samples returned values of 0.159 ounce-per-ton (5.45 g/t) Au, 0.154 ounce per ton (5.28 g/t) Au, and 0.116 once per ton (3.98 g/t) Au. The Company now intends to conduct more exploration activity within the lake-bound portion of the project area to determine the prospectivity of a large underexplored section of the property.”

A phase one, 1,000 meter (minimum) diamond drill program will test the potential of a mineralized corridor along the southern portion of the property in the late winter/early spring of 2020.

The drill program will be designed to test anomalous rock samples that were collected as part of the 2019 fall prospecting program recently completed by Rimini Exploration in the St. Paul’s Bay area of the property.

The phase two prospecting program was designed to further determine areas of interest on the property’s southern end, and to continue pre-drill phase data compilation to help determine initial drill targets. The focus of the prospecting was concentrated in and around Perch Lake, in the Saint Paul’s Bay area, located in the southernmost section of the 1,348.5-hectare property.

This prospecting program traced the mineralized corridor clear across to the eastern boundary of the property (above map).

The mineralization along this corridor consists of disseminated pyrite and chalcopyrite hosted in sheared chloritized felsic tuffs displaying zones of carbonate, sericitic and silicious alteration.

Translated into non-geo speak: they’ve got the right rocks.

We’re eager to conduct our first drill campaign at McKenzie, all the data we’ve compiled so far has given us multiple, compelling targets. Historical drilling and sampling, and our own groundwork, has revealed several mineralized zones, with some high-grade values. We would like to extend those zones with some new drill data and continue to move this project forward. The permitting process is underway, and we anticipate executing the program in Q1, 2020.

Nexus is not a one-trick pony.

The company has multiple irons in the fire—an update from their Dakouli Project in Burkina Faso should come early in the new year.