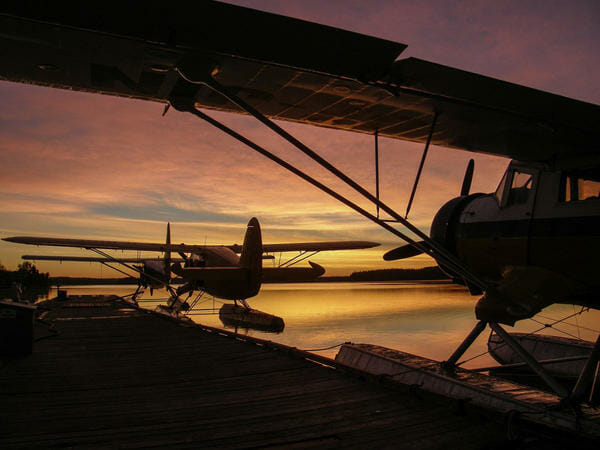 One of our favorite Golds – Nexus Gold Corp (NXS.V) – has just entered into a LOI (letter of intent) to acquire the McKenzie Gold Project in the prolific Red Lake Mining Camp of northwestern Ontario.

Just how prolific is Red Lake? Production is well north of 29 million oz’s making it the third largest gold camp in Canada.

The project suddenly became available when Enforcer Gold (VEIN.V) gave up its pursuit of the project after a proposed financing fell through.

Note the date on Enforcer’s corporate update (Jan. 23rd) and this acquisition news from NXS (Jan. 30th) – barely a week between events.

This was a real heads up move on management’s part. And I’m guessing that 1082545 B.C. Ltd, the vendor of the McKenzie property, was being extra careful about who they partnered with next, not wanting a repeat of the Enforcer fail.

The price of admission? Six million Nexus common shares and a one-time cash payment of $150,000.

I find the terms of the deal interesting, that the vendor is willing to take NXS common in exchange for their Red Lake claim blocks. They must believe in the potential of the property AND the Nexus’ ability to execute.

From where I sit, it looks like a damn good deal, especially when you consider the address. 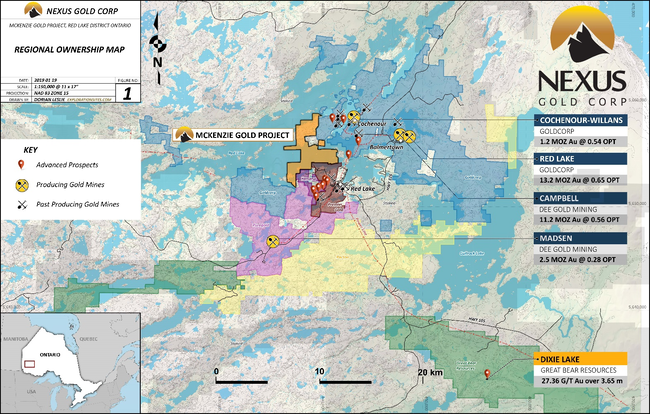 As you can clearly see, McKenzie’s 1,348.5 hectares is located in the heart of the Red Lake gold camp. The project is surrounded by the likes of Goldcorp (G.T), Yamana (YRI.T), Pure Gold (PGM.V) and Premier Gold (PG.T).

A cursory study of the claim map shows the property is divided roughly equally between land and water.

The liquid portion of the claims package is Red Lake itself – the lions share of the projects terra firma is McKenzie Island. 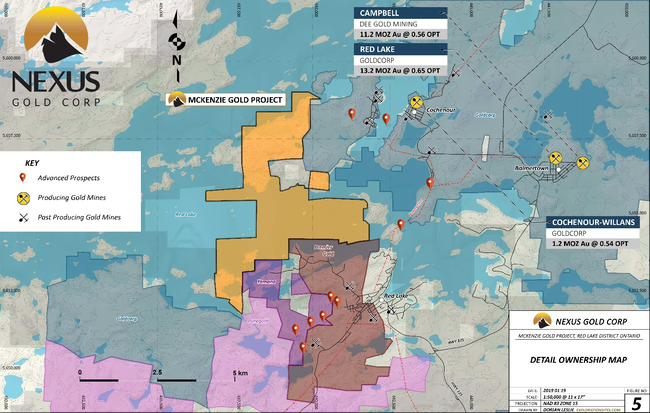 From the Jan. 30th press release…

This 2005 hit occurred within a strongly silicified, sericite-altered, east-west-trending mineralized zone up to 600 meters long and open along strike and to depth.

In the southwest corner of the island, a new showing – a 12 cm wide, low-angle quartz vein exposed from the shoreline over a length of 2.0 meters – was discovered. High-grade samples ranged from 9.37 g/t Au to 331 g/t Au.

Although this vein is narrow, and the strike length is unknown, it demonstrates the untapped potential of the area (Red Lake is known for its narrow high-grade veins).

Alex Klenman, Cypress president and CEO, stated the following re the acquisition:

The McKenzie Gold Project, with numerous high-grade showings, presents a compelling exploration opportunity for Nexus. This acquisition will give us two highly prospective Canadian-based projects with potential high-grade upside, that provides an excellent compliment to our active West African portfolio. Red Lake is a high-profile, well-established gold producing region that garners much market interest. By expanding our jurisdictional scope here, and elsewhere, Nexus can reach a much wider audience. Once this acquisition is completed, Nexus will have six projects on two continents, in some of the most prolific gold producing regions on the planet. We feel this puts the Company in an excellent position for growth, particularly in a stronger gold market.

Two things strike me as particularly insightful re Klenman’s comments above:

It’s important to note that this is not a done deal, not just yet.

Nexus has entered into a LOI with the vendor.

For those unfamiliar with the term, a LOI is a preliminary agreement, a roadmap if you will, that lays out the foundation for future negotiations which could lead to a formal binding agreement.

Nexus Gold is perhaps best known for its extensive portfolio of projects in Burkina Faso. We’ve covered these projects in some detail:

Nexus currently has 42.29 million shares outstanding giving it a market cap of roughly $5.29M, based on its current trading range.

This is a smart and savvy crew.

The company’s recent Bridge River acquisition, and now Red Lake, shows preparedness, an inclination to seize an opportunity when one presents itself.