As a general rule, I’m against any company with ‘cann’ or ‘canna’ in its title. You could make a drinking game out of reading the names of cannabis companies and taking a slug of tequila whenever you hit a canna, and you’d be drunktank-ready inside 25 syllables.

But I’m going to give a pass to Isracann because it really does adequately describe the company you’d be buying into.

Isracann is Israel’s first pure play marijuana farming deal, with 220k sq ft of grow fully funded right now and licenses and permitting in place to get those built ASAP.

That should be enough to get your interest, because that alone, in Canada, would be worthy of a $200m market cap. But there are some added value components here that make this a nice hedge play while you’re waiting for your Canadian LPs to get their act together.

When you’re trying to keep a greenhouse by the airport in Edmonton warm, there’s a fairly significant cost involved because, at various times of the year, the sun hides from Alberta.

The sun never hides from Israel. You don’t see Israel making a run at the medals in the Winter Olympics, because the only white stuff in play generally is in the bathrooms of the hottest nightclubs in Tel Aviv-Yafo.

The cost savings come from many areas, including Israel’s farming legacy. When you’re living in the desert, food production is a big deal, and Israel is the breadbasket of the Middle East because self sufficiency is key when you’re surrounded on all sides by folks who don’t share your vision politically. Because of this, Israel is recognized globally for its excellence in agriculture, as well as research, genetics, processing and product development, and quality assurance.

Isracann estimates per gram costs as likely to be around $0.40 per gram, which is at the very least half of what you might find in Canada, but more likely a quarter, or even a tenth if you’re comparing to some of the less functional outfits currently blowing through their bank balance.

To be sure, a lot of companies that aren’t yet growing anything will tell you how cheap they’re going to be down the road, and few hit their targets first time around, so I’m going to assume Isracann will really be growing at around 50% more than their estimates – which still puts them at a terrific $0.60 per gram. 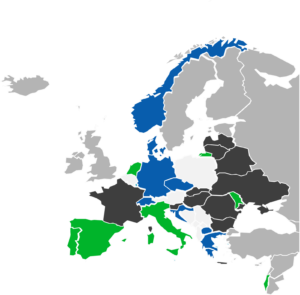 Isracann plans to make their facilities IMC-GAP/GSP (Israeli Medical Cannabis Good Agricultural Practices) certified, which means their products will be export-ready, and that’s set to happen right around the time Israel allows such things.

To get into Europe requires more certification, so the above isn’t a lay-up, but by the time production is significant enough to fulfill Israel’s current gaping domestic need, leaving any overflow set for the export market, that certification could be expected to be well at hand.

Canadians often don’t put too much significance on the European cannabis opportunity, because the demand is so hard to picture and the rules that need to be changed so many, but even if just for the currently legal German market, in which the government fully subsidizes patients, there’s a fat population to be served that outweighs the potential for North America alone.

There are presently ten countries in Europe that make cannabis available for medical patients. That number is going to be incorrect very soon as more and more come online.

Whose stupid idea was it to grow a crop like marijuana in Canada?

In the summer, fantastic stuff, but we don’t have that much summer, which means your fields are down for 1/3 of the year, or you’re plying your trade indoors and sharing your bank balance with the local power company. 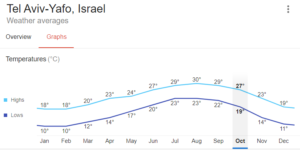 Cannabis likes warm weather. It does okay in low rainfall and crappy soil. While cannabis will grow in temperatures sub-20 degrees Celsius, sugars will not move around the plant as well, and taste and yield will suffer.

Ideally you want temperatures between 20-25 degrees, and with a hybrid greenhouse in an area that hits that mark most of the year (Israel gets 300+ days per year of full sun), an Israel-based grow facility is geographically perfect.

Some may ask, why grow it indoors at all if you’re getting all that sun? The answer: Cannabis doesn’t just want sun, it likes humidity, so a hybrid grow allows you to keep things just right while still capturing all those UV rays. Added to that, when it does rain in Israel, it comes down in a biblical fashion, so averaging things out is key.

It’s estimated 27% of Israelis use cannabis, which makes them a global leader in cann-sumption. Part of that comes from Israel’s legacy as a black market supplier to the world, back in the old days. Another reason cannabis use has risen is, in 2015, local law enforcement made only 200 arrests for possession, reasoning that there were more important things to chase.

And some of that use might even stem from the fact The Tribe have been using cannabis since Jesus was hustling dime bags at carpentry school.

That’s probably why, back in 2007, Israel legalized cannabis-based medical research and cultivation, long before North America was in the game. Currently, just three countries are slated to allow exports imminently, and Israel is one of those, but nobody producing cannabis is going to ship the stuff currently because the local market is, amazingly, so under-served by legal product. 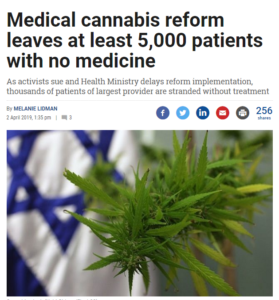 There are 46k+ medical marijuana patients in Israel currently, which is about the same level found in Canada in 2015, shortly before we added a digit to the total, and about 36k more than there was in Israel a year ago.

Worth noting: There are 10k more on a wait list, due to supply constraints. This is where the real business is.

Full recreational isn’t a thing in the holy land just yet, though anyone who has been on a kibbutz can confirm there’s no shortage of grey market ganj’ use in Israel proper. Hell, even Canopy could make a living selling their ditchweed to the Israelis, if they were growing said ditchweed in the country.

Right now, Israel’s medical patients are where Canada’s were in 2014, appealing for less regulation so they can actually get their medicine, as regulators stumble about trying to make sense of it all. That may point to unforseen delays down the line in Isracann’s licensing and permitting, but you can’t have everything or you wouldn’t get it at the price you’re about to get it.

Long term, export to Europe is going to be important, and Israel’s proximity to Malta will make it a go-to point for that. But in the short term there are real revenues to be had by just hanging out a shingle and letting locals have access to what they crave.

Daryl Jones is the CEO, and nobody at Isracann is going to tell you he’s the foremost authority on growing cannabis in Israel. No, he’s not there to plunge his hands into fertilizer, he’s there because he helped put together True Leaf (MJ.C) back in the day, which rose to be a $200m enterprise at the Canadian sector peak. There are ‘operations CEOs’ and there are ‘marketing CEOs,’ and there are finance CEOs. Jones is the latter, and that’s really important in a business that requires capital to scale, and runway with which to find profitability. With a few decades at PI Financial and Raymond James, Jones has the rolodex one needs to build a business in this market.

Brett Allan, who you may recall being part of the go public teams of the $700m Organigram (OGI.T), the recently acquired for $100m Emblem, and the $350m Green Organic Dutchman (TGOD.T), sits on the advisory board, when he’s not sitting on his speedboat reveling in his successes.

There are research partnerships and manufacture partnerships and more to discuss, but the guts of this deal, and what makes it worth looking at, is the farming, in a place where farming is cheap and the end product high quality, for a low price, in a place that’s just starting the rocket ride Canada is now at the end of.

If Canada’s LPs are giving you heart failure, it’s time to bust out the passport, son. Give Isracann a look when it lands on the exchange Thursday.

FULL DISCLOSURE: Isracann is an Equity.Guru marketing client, and the author still has some stock left over from its RTO target, Atlas Blockchain. He is not overly happy about that last bit.