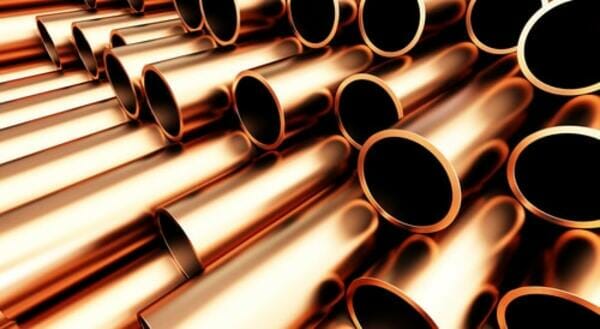 Before we dive into the numbers, let’s explore some of ROCK’s more compelling attributes.

Mining infrastructure abounds throughout the region – a 357 Kilovolt (kV) powerline runs within 16 kilometers of the project.

ROCK’s crew is also top-shelf. This management team, already stacked with talent, added Grant Ewing to its roster a short while back.

A professional geologist with over 25 years of experience in the mineral industry and the last decade-plus in senior executive roles, Ewing’s skill-sets span the entire mine development spectrum, from grassroots exploration to production.

Grant is the real deal. He was at the helm of Kiska Metals when it was acquired by AuRico Metals. He continued on as VP of Exploration with AuRico until it was acquired by Centerra Gold (CG.T) in a deal valued at roughly $300 million.

Prior to that, Grant ran Acadian Mining which ultimately ended up in the hands of celebrated Atlantic Gold (AGB.V). Atlantic made headlines recently when Oz based St Barbara (AUD.AX) swooped in and took it out in a deal worth $768M.

The M&A experience Ewing brings to the table adds an interesting dynamic to Rockridge. If you’re like me, your shortlist of potential buy candidates is stacked with companies with targets on their backs.

A bit of history and geology

In Nov. 2018, ROCK entered into an option to acquire a 100% interest in Knife Lake from Eagle Plains Resources (EPL.V). There’s a good story behind how Eagle Plains came to acquire this project – it was a real heads up move.

Rockridge and Eagle Plains hammered out a deal that allows ROCK to acquire 100% of the entire project. The cost to ROCK: less than one penny per pound of copper (based on the historical resource numbers).

The fact that Knife Lake is positioned along a prolific VMS setting is one of Rockridge’s most compelling attributes.

Knife Lake’s 85K hectares are vastly under explored – the discovery potential is considerable.

Multiple clusters of high-grade Cu-Zn-Ag-Co zones within the project’s subsurface layers is a distinct possibility.

Though the project saw extensive exploration from the late 1960s to the 1990s (airborne geophysics, regional mapping & geochemistry), the regions ultimate geological potential remains a mystery.

Groundwork and sampling – analyzing rock geochemistry to identify prospective VMS style hydrothermal systems – will be conducted property wide; as will following up on historic conductors, alteration and mineralization at regional targets.

Significant results from this drilling campaign:

Note the depth of ALL of the intervals reported above. The closer a deposit is to the surface, the better the chances it will evolve into an economic orebody.

First, it’s important to understand that management, after studying their updated geological models, believe that Knife Lake is a remobilized portion of a larger VMS deposit.

The thinking, in layman terms: the real guts to this system has yet to be discovered.

The tables below summarize the sensitivity of this resource estimate to various cutoff grades. The base case cutoff of 0.40% CuEq is highlighted.

Some of you who have been following the ROCK story might be wondering, ‘why is this inaugural resource not more in line with the historical resource?’ Fair question.

It’s important to understand that Knife Lake’s resource has been confined within an open pit shape to define “reasonable prospects of eventual economic extraction.”

Rather than stretching the numbers, that is, riding the line between fact and fiction, this crew chose the conservative approach and gave us a resource base that serves as a solid foundation on which to build.

Within the resource estimate block model volume there are 332 drillholes with a total assayed length of 7,253 metres drilled since the 1990’s era drilling, which have been used for grade interpolation. Historic 1970’s and earlier drilling have not been used because grades could not be verified.

Below is a three-dimensional view of the Knife Lake block model illustrating the copper equivalent grade for the entire length of the deposit. The view is looking northwest on a grid of 200 meters by 200 meters for scale (note the higher-grade sweet spots in orange and pink and remember this mineralization is right near surface). 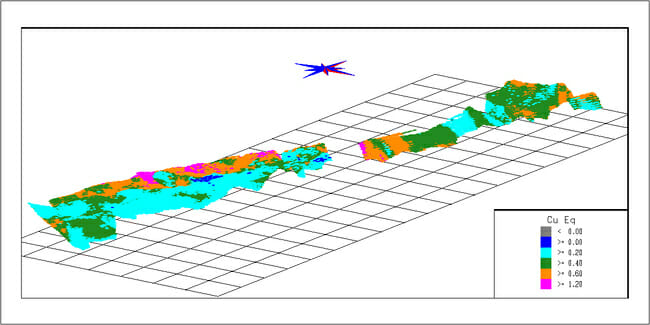 “This first NI 43-101 resource estimate for the Knife Lake deposit represents an important milestone for the Company. The near surface resource serves as a great foundation for the project. The Company will now focus on expanding the resource by drilling off extensions to the known deposit and exploring for additional deposits in the immediate vicinity on the extensive Knife Lake landholding. The geologic setting of the Knife Lake district is similar to the world-class Flin Flon metals belt to the south, where numerous economic mines have been developed, implying high mineral potential for the underexplored Knife Lake property.”

“This initial NI 43-101 resource estimate is a significant milestone for the Company. With the shallow Knife Lake deposit as a remobilized portion of a presumably larger primary VMS deposit, we are excited to commence a regional summer field program to unlock further value at the project through additional discoveries. There have been several other notable developments in the region including an upcoming 100,000m drill program planned by Rockcliff Metals as well as Hudbay Mineral’s new discovery near the Lalor mine. With several mineral properties in our portfolio, we will continue to execute on our value creation strategy of going into overlooked but prospective projects in prolific mining jurisdictions and using modern exploration methodologies to test new ideas and make new discoveries.”

A summer exploration program is scheduled to commence shortly and will focus on evaluating existing, highly prospective targets within the company’s massive 85,196 land package.

Targets in the immediate vicinity of the Knife Lake resource are currently being prioritized.

A program consisting of geophysics and diamond drilling will test the highest priority targets later this year.

Recent drilling on the project likely generated a bounty of valuable data regarding Knife Lake’s geology, alteration & mineralization. This fresh intel could go a long way towards helping the team home in on new discoveries, or extensions of the main deposit itself.

Personally, I’m more than a little curious to see what lies at depth, where the Knife Lake deposit remains open (recent drilling was limited to only 100 meters depth).

Knife Lake contains typical VMS mineralogy which has been significantly modified and partially remobilized during the emplacement of granitic rocks. Therefore, the known deposit may represent a remobilized portion of a presumably larger “primary” VMS deposit based on general observations about the mineralogy, mineral textures and metal ratios in the deposit. Most of the historical work has consisted of shallow drilling at the deposit area with little regional work carried out and limited deeper drilling below the deposit. As a result, there is strong discovery potential both at depth and regionally.

The company will be putting boots to the ground at their Raney Gold Project later this summer.

If you’re unfamiliar with Abitibi, the following Guru offerings will help bring you up to speed:

Gold opportunities in the Abitibi Greenstone Belt: 13 dirt-cheap ExplorerCo’s for your consideration

Gold opportunities in the Abitibi Greenstone Belt: an UPDATE on our list of dirt-cheap ExplorerCo’s

A round of regional exploration will likely lead to a drilling campaign later in the year.

Though Knife Lake is the headline act, the discovery potential at Raney shouldn’t be underestimated.

The company is about to shift things into a whole new gear.

Recent innovations in target defining technologies will be generously applied to Knife Lake’s terrain in the coming weeks. The net result will likely be a list brimming with high-priority drill targets.

Regarding the possibility for future acquisitions, in an earlier Guru offering we made the following comment:

With a talent pool this deep, you gotta know management has their eye on further acquisitions, perhaps along the same greenstone belt.

With Joseph Gallucci’s contacts in the industry – Trevali, Osisko, Hudbay – ROCK stands a good chance of acquiring advanced-stage projects on similar terms as Knife Lake (< $0.01 per lb Cu) by tapping into the non-core asset portfolios of these larger mining companies.

Regarding the copper market itself, if you’re not a believer, you need to educate yourself. Recent Guru offerings layout the case for the metal and you must gain this knowledge.

Additional insights into this rapidly evolving high-grade copper story can be attained by tapping the following links:

The balance of 2019 promises steady newsflow.

These are very interesting times for high-grade Cu ExplorerCos like Rockridge.