Part II of our Golden Triangle coverage will focus on a handful of companies a little higher up on the development-resource food chain.

Back into the Triangle…

Ascot is a Gldn-Tri ExplorerCo transitioning into producer, focusing their energy on re-starting the past producing Premier gold mine.

This project is steeped in mining history.

Hailed as one of THE greatest gold and silver mines on the planet in its day, Premier began production back in 1918, hitting its peak during the Great Depression.

Roughly 628,000 meters of drilling, in some 6,110 drill holes, have targeted the Premier mine, the Big Missouri mine, the Martha Ellen and Dilworth areas of the property to date.

The quarry here is high-grade gold hosted in “quartz breccias, quartz veins and associated stock work around breccia zones within an envelope of quartz-sericite-pyrite alteration.”

Of those 6,100-plus holes drilled into the various structures around the property, one in 10  tagged over one oz of gold per tonne.

High-grade resources across the project currently stand at:

In a recent development, the company took out Rob McLeod’s IDM Mining, and its 17,125-hectare high-grade Red Mountain project, consolidating the company’s interests in the Triangle.

The company’s $153M market cap is backstopped by a stable of solid assets and a growing high-grade resource base.

Auryn’s interest in the Golden Triangle might seem minor when matched against its Nunavut asset base – Committee Bay & Gibson MacQuoid. But that can change with one pass of the drill bit.

Auryn’s foray into the Triangle back in 2016 kinda messed up a play I had positioned myself in when they acquired Homestake Resources. I was expecting a fat return on my pile of Homestake common.

Instead, I was offered a measly 13% premium in a surprise deal that showed resourcefulness on Auryn’s part, benefiting its shareholder base in a major way.

Homestake Ridge covers roughly 7,500 hectares within the Iskut-Stewart-Kitsault belt in the Triangle. 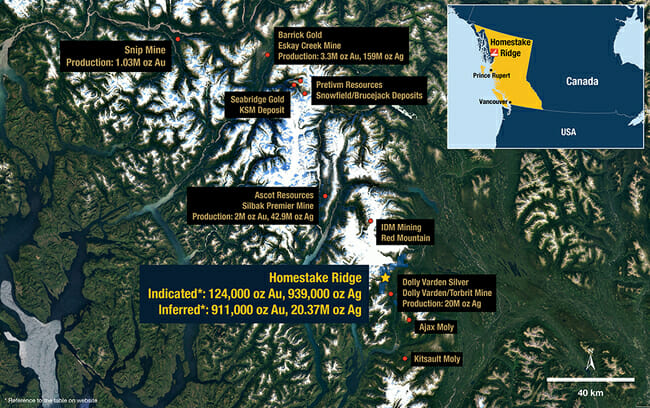 More than 275 holes totaling more than 90,000 meters have probed the Ridge’s subsurface to date. A good number of exploration targets remain untested.

Resources at Homestake Ridge currently stand at 1,035,000 ounces of gold and 21,300,000 ounces of silver, most of which are classified as Inferred material.

A 2017 summer drill program was carried out to test two of seven high-priority target areas across the property. The goal was to expand the South Reef zone as well test for extensions of the Homestake Main deposit.

Curiously, the company launched a 3,000-meter drill program back in mid-August at Homestake Ridge to further test gold mineralization along the high-grade South Reef zone. I say “curiously” because that was a good seven months ago and we haven’t heard back. Sup with your Gldn-Tri drill assays, Auryn?

Interesting company. One to watch.

Copper Fox holds a 25% interest in Schaft Creek, a joint venture with Teck Resources (TECK-B.T). Teck is the operator of the project.

A detailed summary of Copper Fox’s share of Schaft Creek’s reserves and resources can be found here.

The terms of the Schaft Creek joint venture are laid out as follows:

Teck will fund 100% of costs incurred prior to a production decision up to $60 million; Copper Fox’s pro rata share of any pre-production costs in excess of $60 million will be funded by Teck and the two remaining direct cash payments payable to Copper Fox will be reduced by an amount equal to 25% of the expenditure in excess of the initial $60 million.

Teck will fund any additional costs (in excess of $220 million) incurred prior to a production decision, if required, by way of loan (at an interest rate of prime +2%) to Copper Fox to the extent of its pro rata share, without dilution to Copper Fox’s 25% joint venture interest. Management of the Joint Venture will be made up of two representatives from Teck and Copper Fox with voting proportional to equity interests.

Teck has agreed to use all reasonable commercial efforts to arrange project equity and debt financing for project capital costs of constructing a mining operation upon a production decision being made; Teck has agreed to fund Copper Fox’s pro rata share of project capital costs by way of loan (at prime + 2%), if requested by Copper Fox, without dilution to Copper Fox’s 25% joint venture interest. 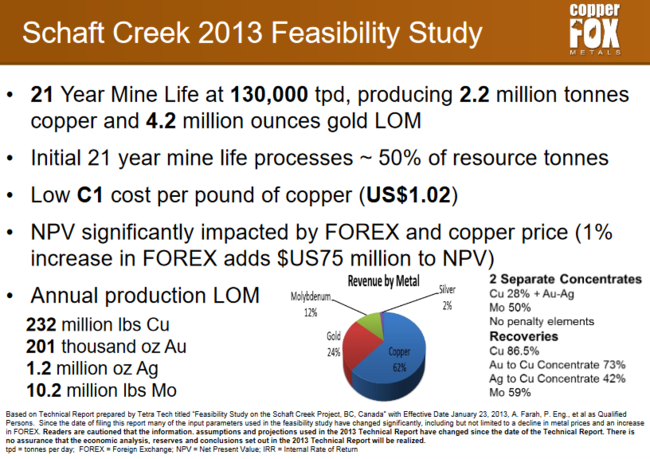 The project has a pre-tax Net Asset Value of approximately $CAD423 million ($0.94/share) at an 8% discount rate.

Some might consider Copper Fox a long term call option on copper.

Skeena’s portfolio of projects includes the past-producing Snip mine, and the Eskay Creek mine – two properties that captured the imaginations of VSE (Vancouver Stock Exchange) speculators back in the day.

These past producing projects were acquired from Barrick (ABX.T) – Snip back in 2016, Eskay Creek in late 2017.

The fundamentals underpinning this extraordinary suite of assets:

Ongoing infill drilling will lead to a maiden resource estimate scheduled to be released later this year.

Exploration drilling is planned for this summer.

Note the scale on this map in relation to the dimensions of the untested areas:

A phase II drilling campaign will focus on upgrading current resources to the Indicated category for future economic analysis.

Exploration drilling will be focused on the rhyolite-hosted feeder structures, analogous to the 21C and 22 Zones (image below): 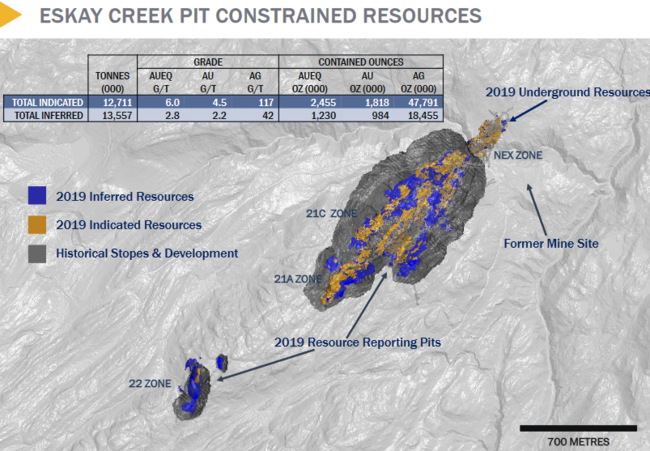 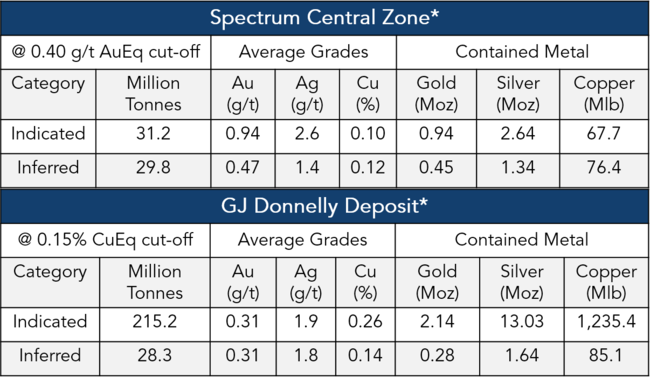 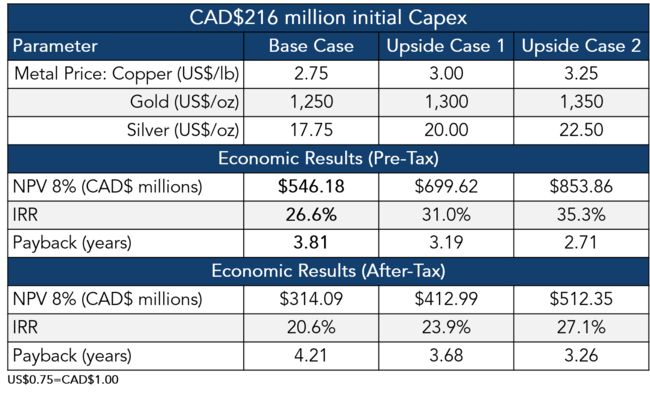 Clearly, this is not your ordinary Goldn-Tri ExplorerCo. It’s top shelf in every respect.

Up until very recently, Imperial was the sole owner of the 23,142 hectare Red Chris copper/gold porphyry mine project.

Red Chris’ resources – this is where the numbers take on a life of their own:

Is it just me, or is that a lot of metal?

As alluded to above, the company WAS the sole owner of Red Chris…

“Imperial Metals Corporation announces that it has entered into an agreement to sell a 70% interest in its Red Chris copper and gold asset in British Columbia, Canada to Newcrest Mining Limited (ASX: NCM) for US$806.5 million in cash, while retaining a 30% interest in the mine. The Company and Newcrest will form a joint venture for the operation of the Red Chris asset going forward, with Newcrest acting as operator.”

Imperial needed this deal to alleviate its debt woes. This ensures Imperial’s survival going forward. It also satiates the appetite of an aggressive, resource hungry producer.

Obviously, there’s a lot more to the Imperial story. I’d recommend taking a close look at the company’s Operations and Exploration Projects page.

Seabridge’s KSM Project – a quartet of deposits know as Kerr, Sulphurets, Michell and Iron Cap – is a geological wonder. 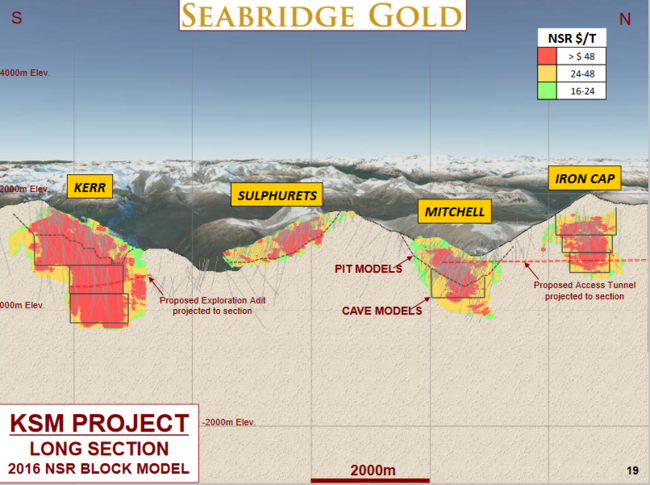 Current resources stand at (and I REALLY needed a calculator for this one) 49,694,000 ounces of gold in the Measured and Indicated category, plus a further 56,330,000 ounces in the Inferred category. All told, KSM holds over 106 million ounces of gold plus a massive amount of copper, silver and moly. 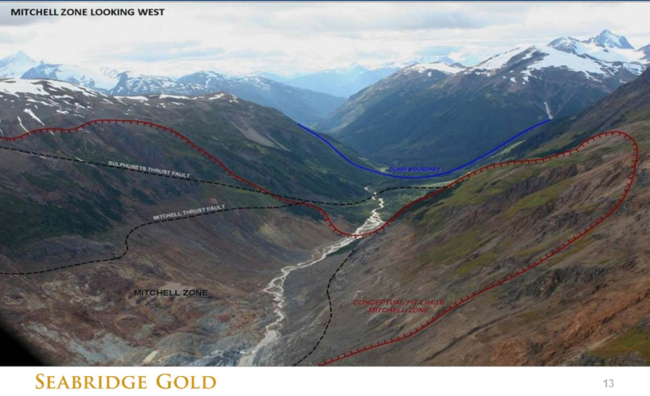 Economic studies from 2016 outlined modest returns for KSM, but this is a project that will evolve with each phase of infill and exploratory drilling:

In the meantime, while shareholders are waiting for gold to assert itself with greater conviction on the daily charts, the ounces at KSM continue to grow:

Seabridge is not a cheap stock, but the company’s enterprise value per ounce-in-the-ground (reserves) is roughly $20.00: 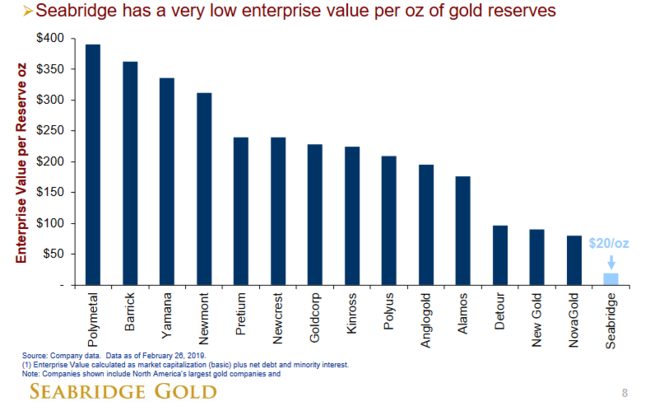 The main drawback to a project this size is Capex – gargantuan deposits, particularly those in remote areas, are tagged with hefty construction budgets. Initial capital costs for KSM are estimated at roughly US$5 billion.

Some might characterize SEA shares as the mother of all long term Call options on the price of gold.

The 2019 Golden Triangle field season promises to be an active one with a number of companies following up on significant new discoveries.

Though we’re still a couple months away from seeing drill rigs mobilized to the area, many of the ExplorerCo’s featured here are firming up in price. The accumulation phase appears to have begun.

Full disclosure: Equity.Guru has no marketing relationship with any of the companies featured above.