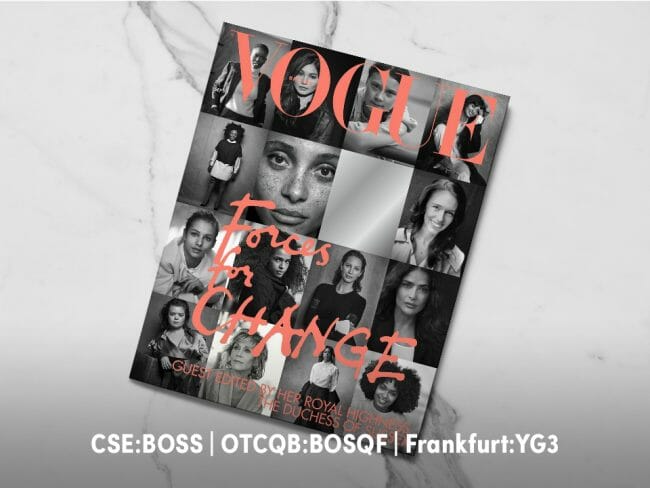 What do Meghan Markle, Kate Moss and Urban Juve by Yield Growth (BOSS.C) have in common? In just a few days, all three will have graced the pages of British Vogue.

We always knew the people at Yield Growth were on to something, but I didn’t take them for fashionistas. On August 2, their Urban Juve anti-aging serum will get its own feature in the September issue of the iconic magazine.

Before you ask: Yes, British Vogue is the UK version of the Vogue magazine that has been around since 1892. My intensive research on the matter revealed 23 international editions of the fashion, beauty and culture magazine. Suffice it to say, Yield Growth has done a fantastic job.

Yield made the announcement official on Tuesday. According to the press release, Urban Juve’s anti-aging serum will be included in the magazine’s print showcase titled “Vogue’s Beauty Highlights.” The hemp-oil-based product will also be featured in Vogue’s digital showcase, opening the door to millions of readers.

The September issue, which goes on sale August 2, is British Vogue’s largest of the year in terms of readership and physical size.

Urban Juve and the Fashion Bible

To say that Vogue will provide much-needed exposure to hemp-based beauty products is an understatement. The British version of the magazine has 1.1 million print readers and a whopping 3 million website users. A feature in “Vogue’s Beauty Highlights” can open many doors to new products that haven’t gotten the mainstream attention they deserve.

“Vogue’s Beauty Highlights” is intended to do just that by featuring hand-selected premium beauty brands.

Penny Green, Yield Growth’s CEO, said Urban Juve’s inclusion in Beauty Highlights is evidence that the product “is developing a reputation as a quality skin-care brand among the elite international beauty community.”

“Our significant investment into market awareness for our extraordinary skin-care products is paying off: we have signed a distribution deal for Greece and now we are in negotiations for distribution in South America, Asia and other parts of Europe. We intend to make Urban Juve the most widely recognized cannabis beauty brand in the world.”

Vogue is widely considered to be a “fashion bible” for its influence on culture and beauty trends. For models, designers and other fashion-industry professionals, an appearance in Vogue is a major achievement.

Tapping into a $25 billion market

Of course, skin-care products account for only a tiny fraction of the global wellness market that CBD is also disrupting. Cannabidiol compounds are already featured in wellness products that include tea, coffee, supplements and even dog treats.

Taken as a whole, the global wellness economy was valued at $4.2 trillion in 2017, according to the Global Wellness Institute.

Yield’s stock price opened slightly lower on Tuesday before paring losses later in the morning. BOSS.C continues to trade right around the CAD$0.30 mark, and a whole lot of nothing has happened the past month.

For Yield’s investors, that’s probably a good thing. After a massive price pump in January and February, BOSS.C has been on a steep downhill path since April. Volatility is to be expected for a marijuana stock that has only been part of the Canadian Stock Exchange since December.

At current values, Yield Growth has a total market capitalization of $26.1 million.

Those betting on the future of the company should take comfort in knowing that Urban Juve plans to market 50 products this year. A feature in Vogue should certainly help those efforts.