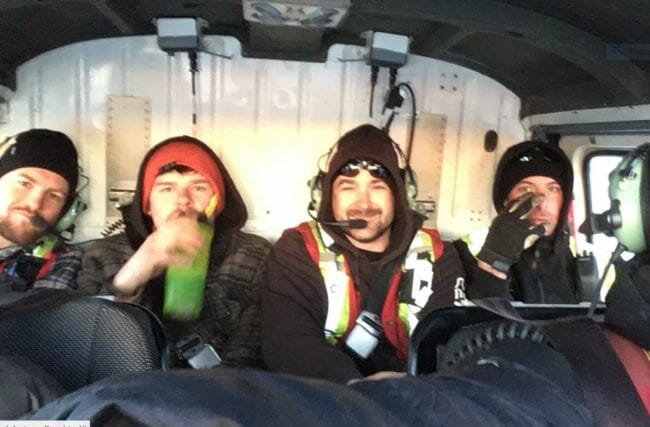 For first-time tourists, the junior mining arena’s current state might evoke shades of a small-town movie theatre: a place once bustling with energy and excitement, now empty; evidence of what was but only as artifacts of another time. Still, for today’s value investor, this is where you will often find the greatest value, the biggest potential bang for your buck. All it takes is a good feather duster, a medium to long-term investment horizon, and a bit of courage.

Buying severely depressed stocks, like Azincourt Energy (AAZ.V), is a counterintuitive process. Entering such buy orders into your trading platform should trigger a host of negative emotions. It REALLY should.

I once heard Rick Rule say that some of his greatest trades came out of the discomfort and uncertainty experienced while building positions in beaten down sectors. He said these negative emotions were an indication that he was on the right track. To paraphrase Rule, you are either a contrarian or you are going to be a victim.

Psychologically, buying stocks in sectors with well-established uptrends is an easy task. It’s like heading out into the night with excitement in mind and stumbling upon a block party where everyone is blotto. It’s an easy ask.

Here’s the thing: if everyone and their dog have already entered the fray, you may find yourself in a crowded trade. You might find yourself holding the bag. 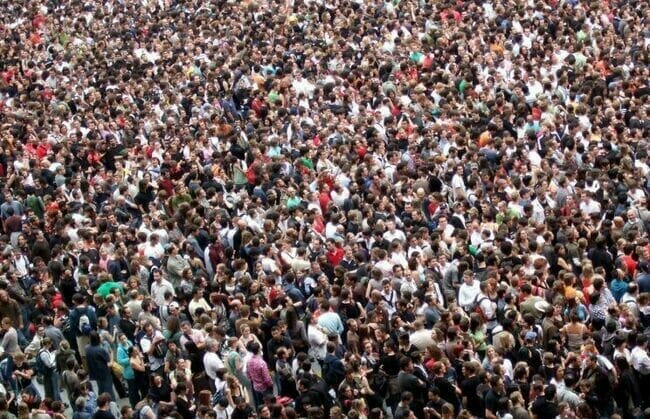 Yes, buying severely depressed stocks may not feel ‘right’ at the time of purchase, but when the downtrend reverses, as it nearly always does, the price action and subsequent payoff can be most spectacular. 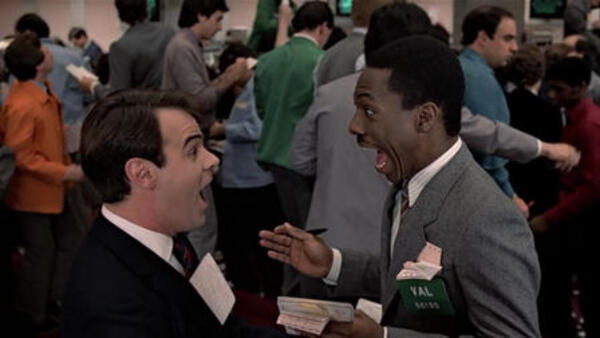 There’s no denying it, the uranium sector is a cold, desolate place. The following 10-year chart of Cameco Corp (CCO.T), THE go-to U308 stock, is indicative of the downcast mood dominating the uranium space right now. 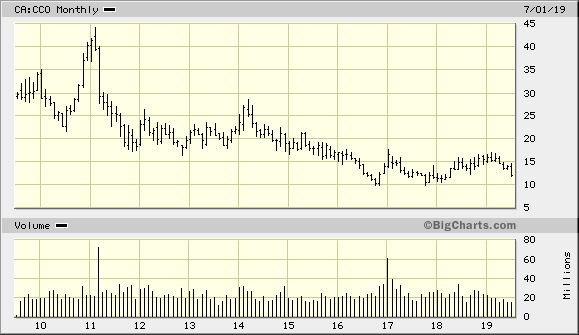 But it’s at times likes these, after a multi-year bear market has shaken everyone out, when shortlisting a few quality names makes the most sense.

The tide will turn. It’s inevitable.

Check out Azincourt’s management team. CEO Alex Klenman, who I know well from having delved deep into Nexus Gold (NXS.V), is keeping Azincourt lean for the time being. There are only two additional directors, each sporting impressive geological resumes, and a CFO on board.

Lean makes sense when the sector is down.

But better times may lie dead ahead.

The market is facing a significant supply deficit. Current uranium production is simply not sufficient to meet the rising demand.

The production costs of many of the world’s uranium mines far exceed current uranium prices.

According to the World Nuclear Association, there are roughly 450 nuclear power reactors operating in 30 countries around the world.

Over 100 power reactors are on order or planned, and over 300 more are proposed, most of which are slated for fast-growing Asian economies with an appetite for all things electric.

In the 2018 edition of its World Energy Outlook report, the IEA’s ‘New Policies Scenario’ sees installed nuclear capacity growth of 25% from 2016 (about 414 GWe) to 2040 (about 518 GWe). The scenario envisages a total generating capacity of 12,466 GWe by 2040, with the increase concentrated heavily in Asia, and in particular China (34% of the total). In this scenario, nuclear’s contribution to global power generation is about 10% in 2040.

This brutal bear market has driven away institutional investors, sell-side analysts, and traders of all shapes and sizes. Current U308 company valuations are absurd.

This disconnect between current prices and the market’s positive fundamental backdrop is not sustainable. And this is where the opportunity lies.

This could well turn into one of those classic opportunities where buying quality companies at current prices is akin to buying dollars for dimes.

I witnessed and traded the uranium bull that raged earlier this century. The trend reversal was dramatic. The price action was epic. It was an event that sent junior U308 ExplorerCo’s on a tear that rivaled anything I had witnessed prior. 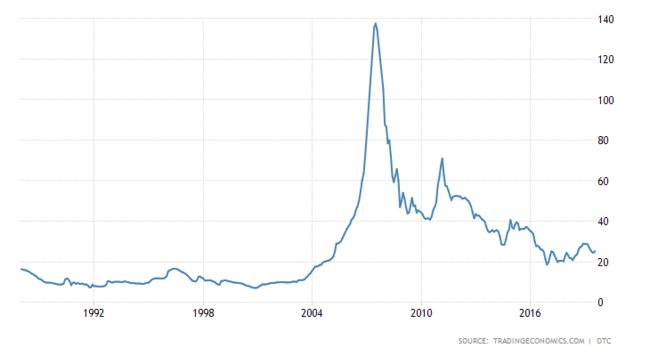 Azincourt is nicely positioned in the mother of all uranium jurisdictions: the Athabasca Basin of northern Saskatchewan. 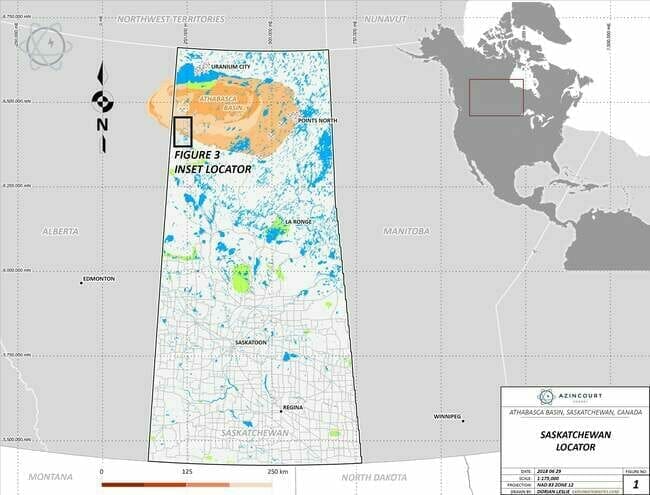 The Athabasca Basin is to uranium what the Carlin Trend is to gold. The region boasts the largest, highest-grade uranium deposits on the planet, sporting grades that are up to 100 times the world average.

The region is geopolitically stable. Decades of production history validate that key consideration. It’s the ultimate address for a uranium ExplorerCo like Azincourt. 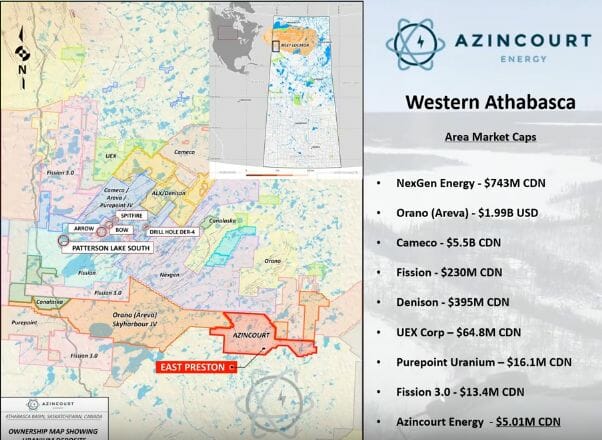 Taking a look at the key players involved in the vicinity of East Preston, and their respective market caps (illustrated on the right of the map above), gives you an indication of just how upscale Azincourt’s neighbourhood is.

Azincourt is all about using good science to home in on its quarry at East Preston.

Over $2.5 million has been spent on the project over the past three years. In the winter of 2017- 2018, the company conducted extensive geophysics on the project.

These are not just simple basement conductors but clearly upgraded/enhanced prospective targets due to the structural complexity.

The bottom line here, in the most basic terms: all of this geophysical work on the project has generated a number of targets – potential structural traps that could hold significant uranium mineralization – many of which require a proper probe with the drill bit.

Earlier this year, the company had plans to drill a good number of their highest priority drill targets. Unfortunately, a late start in permitting this phase one campaign, and deteriorating ground conditions, cut those efforts short. The company succeeded in drilling only 552 meters of a planned 1,500 meter program.

In a corporate update that aired on Youtube on July 25, the company reported that these negative factors prevented them from testing their very best drill targets. Those will have to wait until the ground freezes up later this year.

Regarding the 552 meters drilled at East Preston, the results might best be classified as a technical success:

The initial drill campaign has confirmed the prospectivity of the East Preston project, as basement lithologies and graphitic structures intersected at East Preston are very similar and appear to be analogous to the Patterson Lake South-Arrow-Hook Lake/Spitfire uranium deposit host rocks and setting.

The presence of these pathfinder elements adds additional information and will enhance vectoring towards the most prospective areas of the conductor systems.

“We are certainly very pleased with the results of the first few holes, it’s an excellent start to initial drill testing at East Preston. We have confirmed the project contains the appropriate environment – both geologically and geochemically – that is consistent with uranium mineralization in the area. That’s a significant confirmation, and to be able to determine this at the outset is very positive development. These are the right graphitic-rich host rocks and given we have just started drilling, we’re obviously optimistic about what’s ahead. We have dozens of high priority targets yet to drill, and thanks to recent substantial institutional support we are well funded to execute a much larger phase two program. Permitting is already underway, we have the cash, and we have the targets. Our timing looks good with sector developments as well. We’re excited to get more drills in the ground and will announce details of the upcoming phase two drill campaign in the coming weeks.” 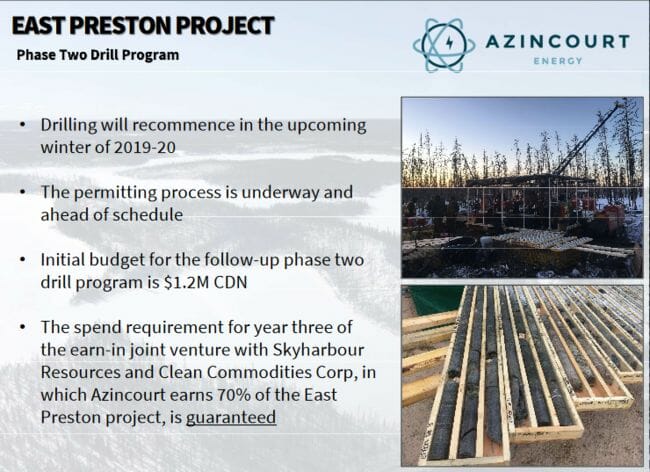 If there is a silver lining in the untimely termination of this phase one drilling campaign, it’s that the market is still apathetic to all things U308. It’s possible that later this year the positive fundamentals highlighted above will kick in and restore some sanity to the U308 market. With a more receptive market, news of a significant new uranium discovery would likely generate a celebration, rather than a yawn-fest.

It’s difficult divining opportunity when the landscape is shrouded in gloom. Uranium companies are currently plumbing their lows. With the extremely positive suppy-demand fundamentals backstopping the sector, these lows are simply not sustainable. Something’s gotta give. Significantly higher prices will be required to help fill the gaps.

With the benefit of multiple layers of geophysical data, ground work, and now a close look at that all important third dimension – depth – Azincourt management appear to be zeroing in on what may prove to be the next major Athabasca Basin discovery.

[…] East Preston Uranium Project, located on the west side of the Basin, is a JV with Azincourt Uranium […]