Patriot One (PAT.T) has a covert plan to save the lives of school-children

Mathews Ward (15) from Louisville Kentucky was angry at the school principal for flogging his disobedient brother.  Young Mister Ward brought a hand gun to school and shot the teacher in the chest, killing him.

It was the first recorded shooting inside a U.S. school.

So far, in 2019 the U.S. has experienced 15 school shootings resulting in injury or death.

Patriot One’s (PAT.T) “Cognitive Microwave Radar” detects concealed weapons from a compact piece of hardware that can be embedded in wall cavities. 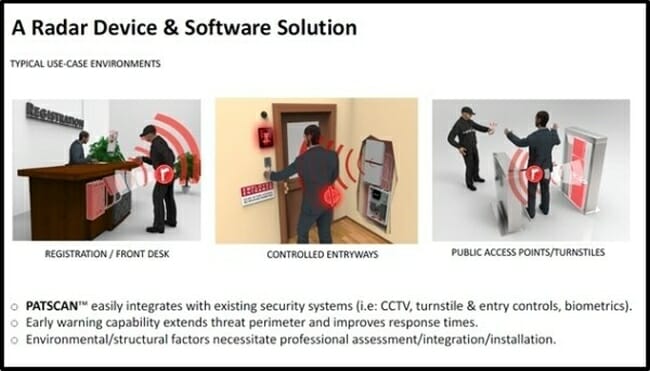 To put it bluntly, PAT’s tech is capable of saving children’s lives at schools.

The ability to “covertly detect” weapons is critical to the technology’s utility.

“Most incidents occur at locations in which the killers find little impediment in pressing their attack,” states Patriot One, “Soft targets carry limited security measures to protect members of the public.”

National Rifle Association (NRA) leader, Wayne LaPierre blamed the massacre of 17 high-school students in Florida on, “the failure of family, the failure of America’s mental health system, and the unbelievable failure of the FBI.”

President Donald Trump chimed in with the suggestion that every school should have “a large number of very weapons-talented teachers.”

“It’s time to make soft targets hard without impacting citizens’ rights and freedoms,” stated PAT CEO Martin Cronin, “We believe that we have a practical solution to prevent deaths in schools without traumatising the student population.”

This last point is key.

A school in Indiana school faced a barrage of criticism for “shooting teachers ‘execution style’ with pellets as part of an “active-shooter drill”.

Active-shooter drills were first introduced into US schools after the Columbine High School massacre in 1999, and have been a common part of school life for a generation of Americans.

“The risk of trauma posed by these highly realistic drills is not matched by any conceivable benefit,” stated one child psychologist.

The Department of Homeland Security YouTube channel advocates a “run, hide, fight strategy” and to look for “sharp or heavy objects” that can be used to “disable the attacker”.

“My daughter has been included in lockdown drills since she was four months old,” stated Heidi Pottinger at the Arizona Department of Health, “She huddles behind the diaper-changing station with her caregivers and other babies, ranging in age from six weeks to 15 months.”

More that 50% of American teens say they are “very or somewhat worried about the possibility of a shooting happening at their school”.

“Non-white teens express a higher level of concern than their white peers. Roughly two-thirds (64%) of non-white teens, including 73% of Hispanics, say they are at least somewhat worried about this, compared with 51% of white teens.” 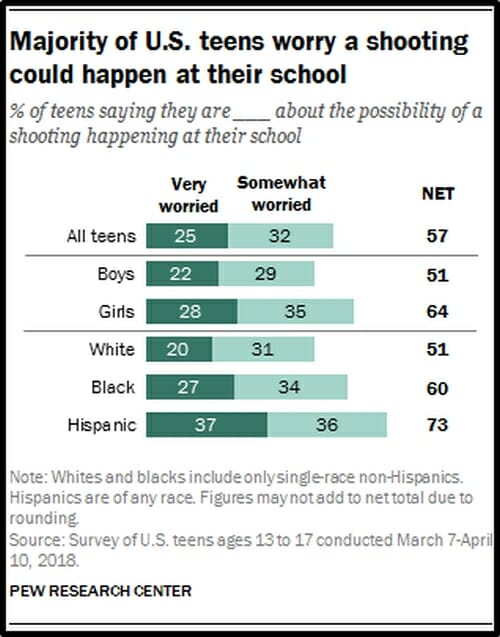 If the world was inhabited exclusively by decent, well-adjusted people, Patriot One would be out of business.

But that is not the world we live in.

As well as and numerous schools, recent U.S. soft targets include: a grocery store in Kentucky, a synagogue in Pittsburgh, a Las Vegas hotel, a yoga studio in Florida, a college bar in California.

Cronin recently met with members of Congress, the Department of Homeland Security, Secret Service and Pentagon officials to discuss PATSCAN deployment in a civil liberties and privacy context.

“We must immediately harden our schools,” Trump announced. “Every day, young children are being dropped off at schools that are virtually wide open, soft targets for anyone bent on mass murder.”

We can agree on that point, Mr. Trump.

Fake executions, metal-detectors, armed guards and “weapons-talented-teachers” are one way to go.

Patriot One has a different solution.

We think it has a better chance of succeeding.