Equity.Guru podcast: It is as it ever was – The Vancouver Island gold rush that helped build B.C. 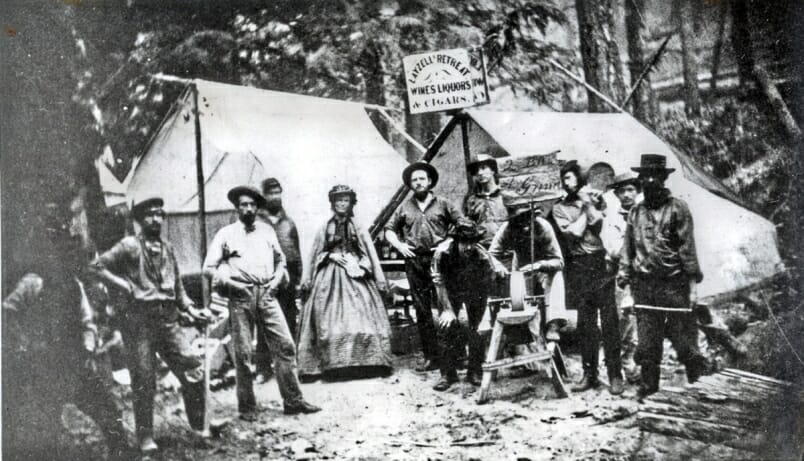 Miners and mining have got a bad rap recently. The Imperial Mines tailing pond fiasco showed just how stupid things can get, but mineral exploration plays an important role in our day-to-day lives that cannot be replaced and the Vancouver Island gold rush literally helped put this province on the map.

Equity.Guru’s own Gaalen Engen serves a slice of 19th century life to illustrate the timeless importance of mining.

Listen in or read the transcript below (it has cool pictures!)

Alexander D. Bell inspects his typeset and sets the press in motion. The Vancouver Times, published particularly for the residents of Victoria, British Columbia, would soon make its debut. Bell is proud of his efforts and careful to point out the Vancouver Island newspaper is geared to support:

“The extension of our commerce; the development of our mines; the institution of liberal and statutory code of mining laws; the completion of the exploration of the Island…”

Mining is hot and if you’re not actively digging, you’re selling to and servicing the ones that are. 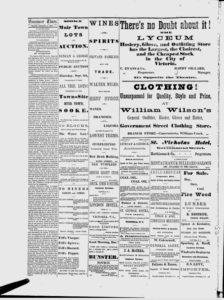 And if you’re not selling or servicing miners, you’re probably funding them.

In Nanaimo, D.M. Lang, managing director of the newly formed Bank of British Columbia raises $1.25M in capital to fund the purchase of gold dust and bars, while his competitor, J.G. Shepherd, raises $5.0M over at the Bank of British North America for the same reason.

Gold is being found by the nuggets in the Sooke, Leech, Jordan and Cowichan rivers. In fact, the company working the Scandanavian claim on the Sooke brought in over 18 ounces of gold last week and says it has enough dirt to keep busy for another four months.

It is this bevy of exploration activity that has miners immigrating by the thousands, mostly from California. These hopeful individuals are helping form the legislation that governs mining and land use with democratic miners meetings as well as regional mining boards appointed by B.C.’s gold commissioner.

Peter O’Reilly, B.C.’s current gold commissioner, has been given the authority of a justice of the peace with the power to settle all disputes of miners. 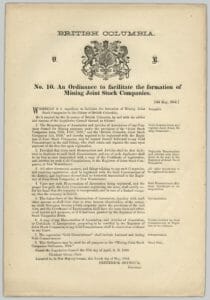 Earlier this year, O’Reilly drafted an ordinance to form Joint Stock Companies where miners will be able to buy and sell shares in the stock of their company creating highly-financed exploration ventures such as the Antler Bed Rock Flume Company who advertised in the Times Colonist back in March that it had $60,000 in capital or 2400 shares of $25 each while Artesian Gold Mining Company said in the same paper that it had $132,000 in working capital or 2640 shares of $50 each.

This has kept everyone busy as the Bank of British Columbia announced it shipped $160,000 in gold bars this week while Bank of British North America shipped $39,000 worth and Wells Fargo carried $179,000 of gold.

Almost 160 years have passed since these stories first tantalized readers, but mining’s impact on our economy and culture remains one of the strongest foundational forces in the creation and unification of our province, not to mention the confederation of Canada.

The numbers may have changed but the degree of enthusiasm and potential for profit-taking are as strong as any mining project on the books today.

Peter Leech, Leechtown and the contribution of the Sooke and Leech river gold rushes almost disappeared in the halls of history under the well-publicized discoveries in the Caribou region of British Columbia, but these seemingly small moments make up an integral part of who we are and more often than not mirror the challenges and benefits of modern mining.

In short, mining is as it ever was and as the next precious metals supercycle kicks into gear, gold bugs once again have the opportunity of building a robust portfolio that historically not only created wealth but solidified a nascent colony so it could become the Canada we know today.

There are no more horse and saddles in our post-millennial electronic society, but mining is just as important to programmers as it was for blacksmiths, so if you have reservations about the current volatility of cannabis, you may want to take a closer look at the resource sector. It has history and a bright future.