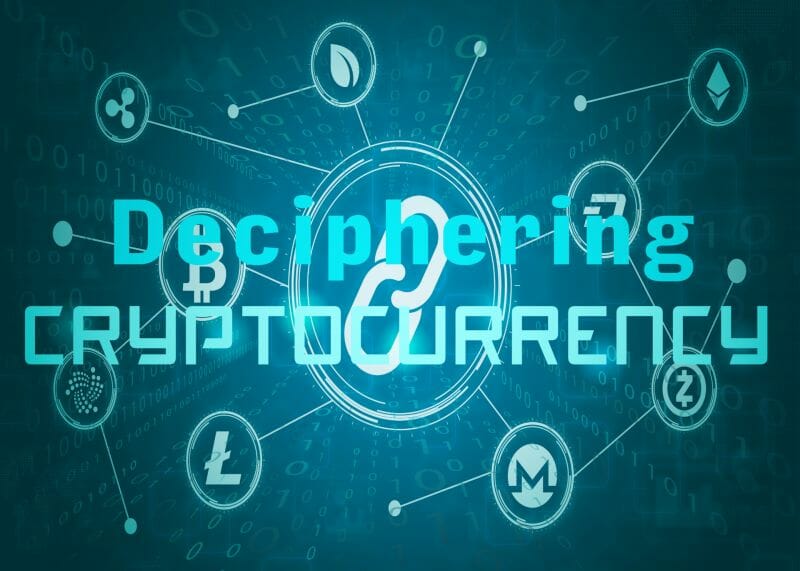 There is lots of speculation about why Bitcoin is up this week ranging from an insecure reaction to Trump’s trade war with China, to new big names now accepting cryptocurrency.

It’s too early to tell if this is the end of the crypto-winter or whether we’ll look back on this week as a type of crypto-groundhog day, but what we know for sure is that Bitcoin has doubled since December. 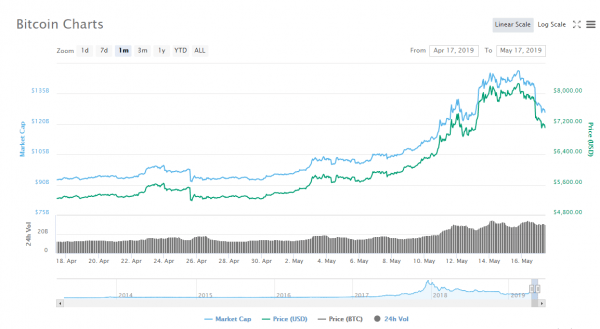 Industry adoption seems to be fueling bitcoin’s valuation run.  Both E*Trade and Fidelity have reported that they will be offering Bitcoin services, while Bakkt announced the start of user acceptance testing for Bitcoin futures contracts in collaboration with ICE Futures U.S. and ICE Clear U.S.

And then there’s U.S. President Donald Trump’s egotistical posturing, pitting the world’s two largest economies in a cheeto-e-mano trade war, jacking tariffs from 10% to 25% on $200 billion worth of Chinese exports. On the same day, bitcoin jumped over $6,000 and you can be certain that’s not a coincidence.

Quantitative easing (also known as printing money) is as much an American past-time as baseball and installing foreign dictators.

It was already on the table prior to the U.S. and China trade war, and it’s also what the U.S. is going to do if China decides to exercise its nuclear option in this trade war, and sell off its $1.13 trillion worth in U.S. treasury bonds. The only other option the U.S. would have in that eventuality is to raise interest rates, and that would be risky for a culture that lives and dies on credit. 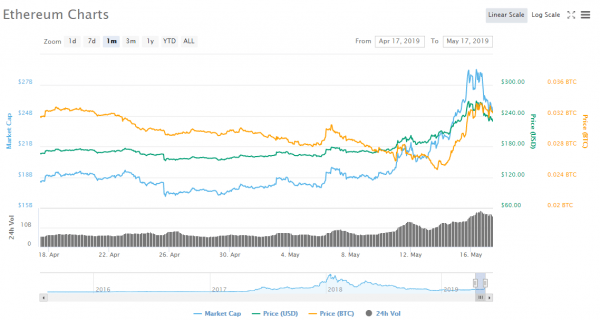 Ethereum and the other altcoins will tag along for the ride as smaller-scale investors look at the price of Bitcoin, and then start looking around to find a better alternative.

That’s why the number two coin is probably your best bet for a short term investment.

Ethereum is currently seeing some resistance just above $200 but could break through when Bitcoin corrects. 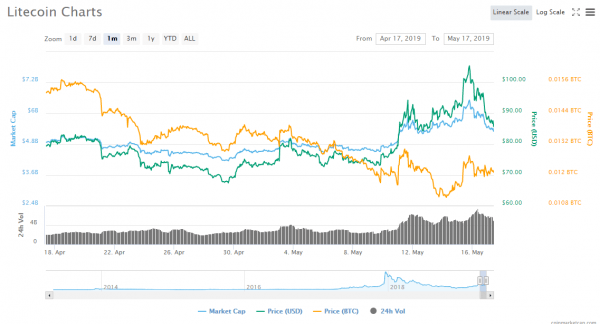 Litecoin’s fate is tied to Bitcoin. It was initially meant to be the silver to Bitcoin’s gold.

Litecoin is often seen as the quiet achiever, going about its business building wealth by itself as long as Bitcoin is also doing well. When Bitcoin goes up, so does Litecoin, except with less flash and fanfare.

This is good for the Litecoin community, which can’t seem to figure out what to do with the coin.

For example, earlier this year when the Litecoin Foundation tried to put together LitePay, a potential Litecoin merchant solution similar to BitPay.

Except that the foundation forgot to keep their subscribers in the loop and had to roll the project back when LitePay CEO Kenneth Asare was unable to answer questions about the company’s documentation during an “Ask Me Anything [AMA]” Reddit post.”

According to user BrockfukcingSamson, the Litecoin Foundation copied and pasted the privacy policy from Coinbase and changed the name rather than make their own. Litepay is no longer a thing and Litecoin took a dive because of it.

Eventually, even Litecoin creator, Charlie Lee, came out to apologize:

Like everyone else, we got too excited about something that was too good to be true and we optimistically overlooked many of the warning signs. I am sorry for having hyped up this company and vow to do better due diligence in the future. https://t.co/khIjeHnyZ1 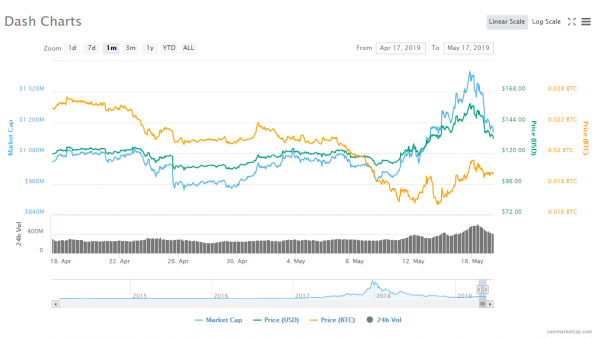 One of the biggest draws for Dash enthusiasts is its ability to obscure the activities of its users, and sometimes that means hiding some nefarious shit.

But there’s an upside, and that’s the ability to hide your transactions and your online movements from an increasingly untrustworthy government.

When the Ecuadorian government finally got tired of hosting Julian Assange in their embassy last month and gave him up to the UK police, the Dash community came out to support his defense by buying merchandise from the Wikileaks shop.

Decentralized payment systems are the only outlet for truly independent media, especially given the recent episodes of financial censorship.

When the banks tried to strangle WikiLeaks out of existence in 2017, moving to crypto seemed like the only option, and when Coinbase famously shut down the WikiLeaks shop from doing business, they went to CoinPayments.

Regardless of how you may feel about Assange, it’s hard to deny that there is a passionate group of core Dashcoin enthusiasts backing this coin.

If the bulls start running it might bear to remember that a bet on Dash is a bet for independent media.  Food for thought.

Zcash is the third of the three main privacy-oriented coins, behind Dash and Monero respectively. At present, it’s the 22nd largest cryptocurrency, but it’s up 40% in the past month following Bitcoin’s rise.

The price is expected to get jacked even higher after the arrival of Overwinter, the tentative name used for the Zcash hard fork.

This is going to be a network upgrade, and the entire network will have three months to update the software after the fork. The upgrade is expected to boost Zcash’s value with analysts predicting that the coin will be worth $200 by the end of the year.

There’s no information on when the software is going to fork, but estimates suggest it will be in the Q4, 2019.

Even if it doesn’t go for a run, Zcash is trading at around $75 right now, and buying in before the hard fork means you can double up when it splits into two coins. Not a bad bet.

Only the strong survive

The blockchain space looks like the aftermath of an episode of Game of Thrones.

Where once there was abundance, now there’s only desolation and a cold, shrill wind blowing through passageways and offices where hope once lived.

A marketing client of ours during better times, DMG (DMG.V) stock now lies halted, frozen at $0.18 since mid-January while they scramble to get their financial statements in order.

Meanwhile, Neptune Dash Technologies (DASH.V) digs around in their couch cushions for spare change to buy ramen noodles while they hope for a windfall from Dash taking off.

Hive Blockchain (HIVE.V) is still bleeding after a failed palace-coup, as Genesis Mining, their largest shareholder with 26.3% of the company’s shares, attempted to remove and replace Hive’s board of directors. Given what they got up to in 2018, it might have been best if they just let Genesis take over.

These three companies are fairly representative of what’s happening in the blockchain sector, but there are a handful of holdouts that have managed to adjust to the harsh climate and eke out some variety of serviceable existence.

There’s Grayscale Bitcoin Trust (GBTC.Q), a digital currency asset manager based out of New York City that has doubled since February, with their share price tipping the scales at $9.94 and a market cap of $1.7 billion. 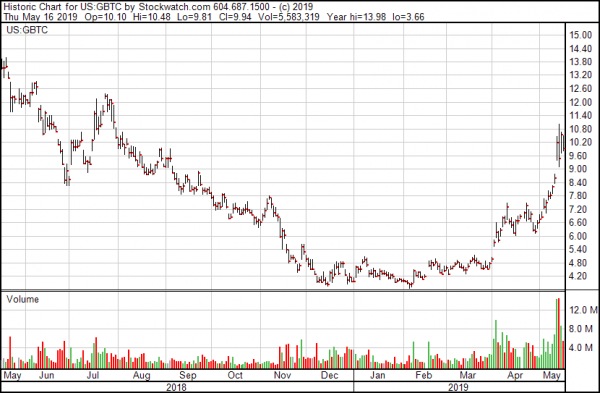 Their latest and strangest idea is that investors should drop gold in favour of bitcoin as a hedge against market disturbances. The timing on this one seems off, as Bitcoin is notoriously volatile and has only recently started to recover.

Another big gainer from the bitcoin rise is Bitcoin Services (BTCS.Q).

We wrote about them in January:

BTCS’s story is what happens when a company holds onto dear life when the market has moved on. They bought in as a bitcoin mining and digital asset company at 2015, focusing on products that are peripheral to the blockchain ecosystem including an e-commerce site and a cryptocoin wallet, both of which never got out of beta.

An attempted merger in October 2017 fell through and then someone broke in and stole all of their mining rigs. Their share price suffered some considerable shocks, hitting the skids at two cents after opening at $0.30 cents in 2015. Now tumbleweeds bounce through their offices and neighbourhood children tell ghost stories and dare each other to spend 10 minutes in their lunch-room.

Now here’s what happened this week on no news. 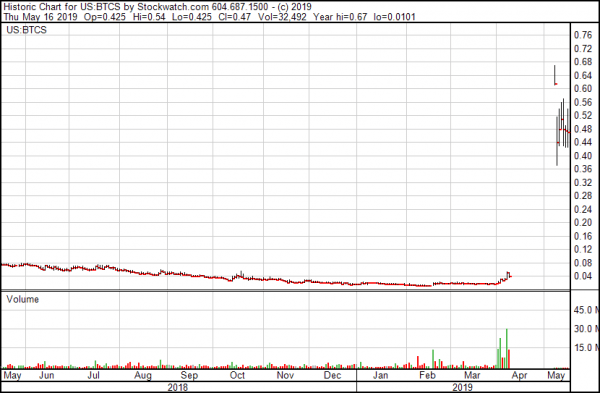 It’s like investors saw the first three letters and thought they were investing in bitcoin.

Stocks were trading at $0.03 before the mystery bump to the $0.40 range, so there had to be at least one guy who went long in BTCS shortly before it tanked and had been underwater so long that he never thought he’d ever recover.  Now this sudden bump has given him the chance to cash in and get out.

Cocktails are on that guy.