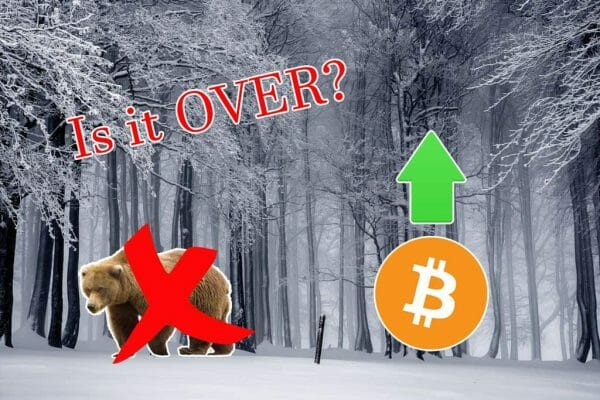 Bitcoin has climbed up to five digits for the first time since July 2018.

This is excellent news for investors and crypto-holders, who have been enduring a long-term freeze that saw hopes crash from a high of $25,000 in December of 2017 to a late December low of $4,225.

Normally, when a publicly traded company enjoys a bump like this it gets the attention of the Investment Industry Regulatory Organization of Canada (IIROC), which will make a polite inquiry to find out why.

The company will either produce big news or admit that it has no idea why its stock is up.

Bitcoin has no regulatory body monitoring its movements, leaving investors to their own research.

Here’s a potential reason why your Bitcoin bet is up.

Starbucks (SBUX.Q) confirmed suspicions this week that they were looking into crypto, and has teamed up with Microsoft (MSFT.Q) to track its beans using blockchain technology. Also, you may be able to buy your morning coffee using Bitcoin in its U.S. branches due to a new app later on this year, according to Forbes.

Starbucks joins a list of nearly 100 more stores that are expected to start accepting Bitcoin and other cryptocurrencies by the end of the year, courtesy of tech start-up Flexa, and their new Spedn app.

Flexa has been working on streamlining the payment system to make buying and selling using cryptocurrency more efficient, accessible and affordable since they were formed in 2018.

Merchants will be able to accept Ether, Bitcoin, Bitcoin Cash, and the Gemini dollar from consumers. It will be available in app stores starting next week.

What’s so special about the Spedn app is that Flexa has stated that it’s supposedly solved cryptocurrency’s scalability problem by putting an intermediary service in between merchants and the blockchain. So you can tap your card like you would with fiat currency for your nonfat latte in the morning and walk away rather than wait for an hour or more for the exchange to go through.

Meanwhile, Flexa’s intermediary app holds the cash from the expenditure while it waits for the block to close and the exchange to go through. If it doesn’t for whatever reason, then Flexa covers the failure with their own Flexacoin.

“This is the first real instance of decentralized global retail payments, with the power to make commerce more efficient and accessible for billions of citizens globally. The legacy payment systems are complicated and costly. This solution provides a way for cryptocurrencies to solve these problems and allow merchants to conduct inexpensive and fraud-resistant transactions,” said Tyler Spalding, co-founder and CEO of Flexa.

This could be the beginning of a new age of mainstream acceptance for cryptocurrency, and it could be more of the same line of bullshit we’ve heard before. The history of cryptocurrency is a history of failure, and the internet is a graveyard of failed coins and misplaced hopes.

Every new app has bumps, bugs and quirks to iron out, and there’s always the distinct possibility that the service gets hacked.

It’s not hard to figure out where the point of weakness is with this app, either.

The logic for cold wallet storage is that there are two types of exchanges:

The same is true of any online service that holds money, which means that Flexa will probably eventually be doling out lots of Flexacoin to cover for payments that have mysteriously gone missing.

If Flexa doesn’t have a solution for this problem before it happens, then the market’s going to react. That means the price will drop, and company’s will retreat just like they did in 2018, and it’ll be back to the deep freeze.

For right now, though, the sun is shining and the ice is melting.

Let’s hope that it stays that way.