Permex Petroleum (OIL.CN) is in an interesting position with oil prices now on the move.

In the Permian Basin, THE highest producing oilfield in the world, land prices have been all over the map hitting a high of $95K per acre in recent months. Permex’s offset acres in the Permian – acres bought and sold next door – have been changing hands between US$10K and US$17.5K in recent days.

Permex moved into the Permian and Delaware basins of West Texas and southeast New Mexico during the last downturn, shrewdly taking advantage of a soft market and land-banking an enviable portfolio of strategic assets.

Note the acres, producing wells, and production opportunity in the following slide:

And they are on the same formations – San Andres, BoneSpring, Wolfcamp – that the large-cap oil companies are going after today. 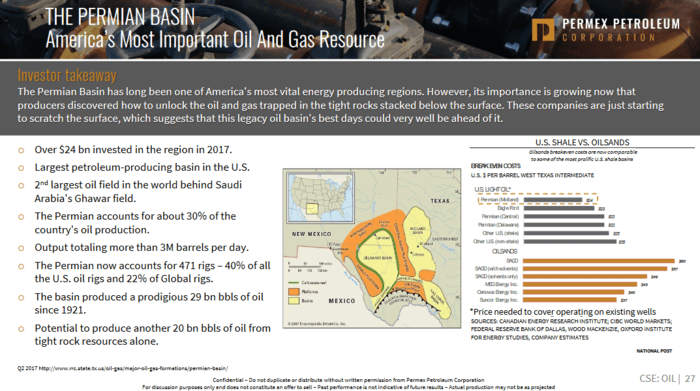 The company has more than 6,500 acres – all held by production (a hugely important consideration) – in eight key project areas.

This has to be one of the most undervalued stocks in the resource universe. Here’s one measure to explain why:

This is a head scratcher. This is a product of an unloved sector. This is also one of the reasons we like this company so much here at Equity Guru. Contrarians, we. 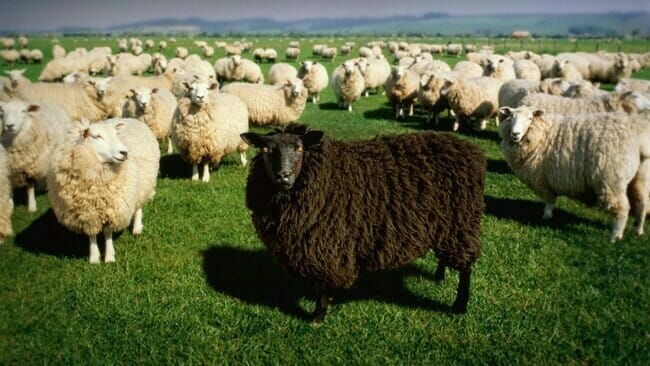 A quick lesson in contrarian psychology: Buying a stock at deeply depressed levels doesn’t always feel right. Going against the flow is counterintuitive. I’ve heard several serially successful contrarian investors state that when they feel that “uncertainty” entering buy orders in such markets, they know they’re on the right track. Interesting.

Permex’s current strategy is to tap its shallower oil via low-cost infill drilling and secondary recovery. While this is ongoing, the company is sizing up the considerable potential in its San Andres acres. Horizontal leg conversion and lateral drilling programs are in the planning stage.

Horizontals are what the market wants to see. It’s what’s going to move the needle. 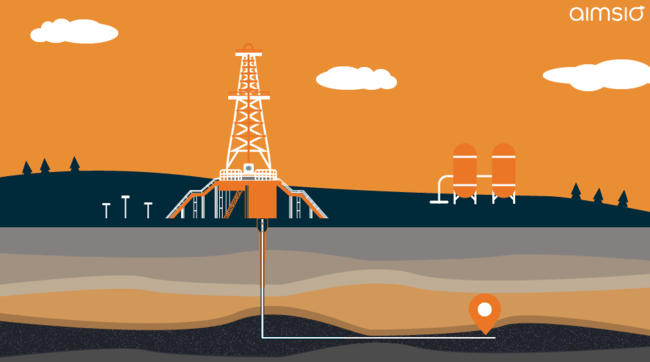 One of the more appealing aspects of this company is its super-tight share structure (< 36 million shares outstanding). In order to fund the company’s aggressive horizontal drilling plans without blowing out this tight structure, Permex CEO and president, Mehran Ehsan, is not ruling out the idea of divesting one or two non-core assets.

But don’t count on these properties being blown out at just any price – the company will be looking to book decent premiums on these highly desirable acres.

There is a wealth of information to be had in a recent Equity Guru podcast with our own Chris Parry and Ehsan. They explore everything from the underlying geology of Permex’s asset base to the intricacies of the oil market.

In this podcast intro, Parry states:

“Companies like Permex Petroleum are geared up for the next energy supercycle, having utilized the downturn to pick up some tasty distressed properties on the cheap. Combine that with the company’s on-going oil production and you have a small cap junior with lots of room to move up the boards.”

This is a good interview. You’ll come away wiser having listened in:

The company’s current share price doesn’t make a whole lot of sense, but herein lies the opportunity to position yourself in an extremely undervalued/asset-rich company in a sector that is currently unloved, hated even.

This extremely oppressive sentiment will shift, as it ALWAYS does, and when that happens, companies with the right mix of assets and production, like Permex, will have their day in the sun.

When will this sentiment shift occur? Good question. Ehsan believes a lot of money is sitting on the sidelines, waiting for a signal that this recent oil price surge is for real.

Based on the chart below, that shift in sentiment, that mobilization of funds from the sidelines, could occur at any time.

Permex Petroleum Submits Application for Listing on the OTCQB Exchange

The company’s assets are all based in West Texas and southeast New Mexico. It makes sense that they seek a listing that’ll make it easier for US investors to position themselves in the stock. Smart move.

“This is another evolutionary step for the company as we seek to enhance our reach within the US markets. We have steadily increased revenues, strengthened our acquisitions, included diverse business growth and development strategies, and we felt like this move was important given all the assets of the company are situated in the United States. We believe that listing on the OTCQB will help to broaden our shareholder base, increase appeal to institutional investors, provide shareholders with better liquidity and, ultimately increase shareholder value, allowing Permex to rapidly accelerate our business strategy.”

Regarding the opportunity for further acquisitions:

Additional acquisitions are in sight for the company to scale its operational footprint in Texas and New Mexico while increasing its horizontal drilling location potential in anticipation of a drilling program.

“It was about 11 months ago that we launched into the public markets outlining our plan to create a unique oil and gas company with assets in the Permian & Delaware Basin. When you look at how much we have accomplished and how well positioned we are in a variety of market segments, you can really see the possibilities and potential. It was our goal all along to be able to list in the United States and we are now in a position to accomplish that goal as well.”

In a recent Permex Guru offering, we stated:

“Anyone positioning themselves in Permex common at current prices will be getting in before the growth curve starts.

With a little under 36 million shares outstanding, the company’s share structure is super tight. With its stock currently trading in the $0.14 range, this has to be considered one of the most out-of-whack valuations in the entire resource arena (author’s humble opinion).”

That remains my opinion, humbly.

Full disclosure: Permex Petroleum is an Equity Guru client. We own the stock.