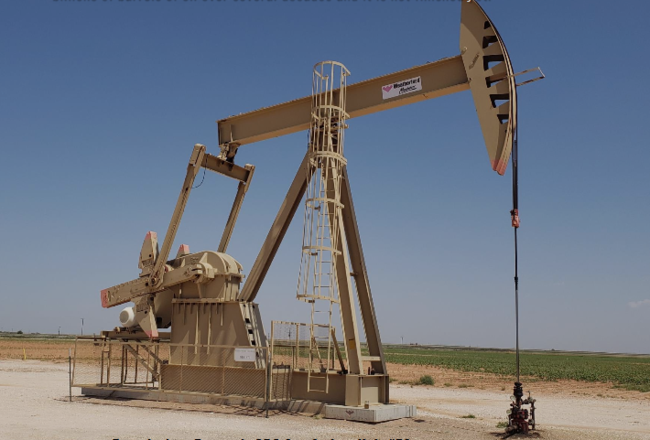 In a recent Equity.Guru offering, we asked: “Shouldn’t our reliance on fossil fuels be tapering off by now?”

For some, the logical answer is “yes”, but it’s not that simple.

We answered this query the following way:

Fossil fuels are finite. Hydrocarbons take hundreds of millions of years to form, and once drained from their subsurface reservoirs, they’re impossible to replace.

Global oil consumption is increasing. It’s not dropping off as expected. Even with a universal shift towards electric vehicles, and our fossil fuel powered cars of today – infinitely more efficient than they were decades ago – we’re consuming 100M barrels of oil per day globally. That’s a dizzying number. And as a consequence, we’re going to extreme lengths to find new sources of the stuff.

Btw, this 100 million barrels per day landmark number is more than twice what it was 50 years ago.

We went on to add:

It would seem that with this current rate of global consumption, and the fact that oil is becoming increasingly difficult to find and extract, all of the green initiatives that are currently in development will need to kick into high gear – FAST – in order to prevent the oil price from going parabolic in the not too distant future.

Okay, enough with the soliloquy.

My point: Fossil fuels appear to be as indispensable today – perhaps more so – than they have ever been. Go figure…

An unparalleled opportunity in the O&G arena

Permex Petroleum (OIL.CN) is a junior O&G company trading at a mere fraction of where it should be trading.

One peek at slide # 4 on the company’s investor deck is your first clue that this isn’t your typical pie-in-the-sky junior O&G company. 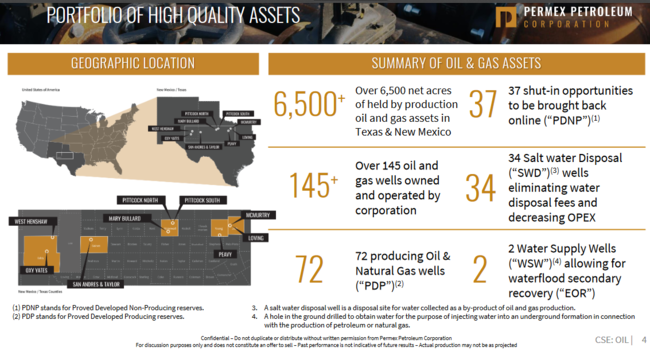 This company has bulk, substance.

The team behind Permex is impressive. It’s a crew that shrewdly took advantage of a soft market, acquiring an extensive portfolio of assets from distressed, debt-laden operators.

How shrewd? The average cost of the company’s Permian ground in New Mexico rang in at less than $2,000 per acre. A lease auction held last September on similar ground saw prices jump to a staggering $95K per acre.

Simple arithmetic, applying even a fraction of the New Mexican real estate prices noted above to their project acreage, dwarfs the company’s current $5M market-cap by a wide margin.

And the above acreage value completely ignores the company’s larger 3,850-acre Permian Basin position in West Texas. Something is waaaaay out of whack here. And of course, herein lies the opportunity.

The company’s phase-one approach to achieving sustainable growth on its extensive portfolio of projects include:

Performance Review – extracted from the Annual CEO Letter to Shareholders:

In 2018, Permex’s opportunistic acquisition strategy allowed the Company to acquire a core holding in the most sought-after basin in the U.S., giving the Company stake in the largest cash-flowing asset in our portfolio today with gross field revenue at $160,000 USD per month in the current low-price environment. Further, we have outlined some of our key year-over-year metrics below – all dollar amounts are the Present Value of future cash flows discounted at 10% before tax derived from YE2018 Independent Reserve Report using forecast pricing, $USD:

Based on this production alone, without taking into account any of the aforementioned acreage or reserve value, Permex is worth a solid $0.30 per share, twice its current price.

This is where things will get interesting. Horizontal drilling along its San Andres Formation project is currently in the planning stage.

Initially, the company is considering a five-well horizontal leg conversion program with a one mile lateral 12 – 20 stage frac on this property. Such a move has the potential to push Permex into a whole new league.

Scaling this kind of production growth won’t come cheap. Serious money – millions of dollars – will be required to drill these horizontal wells.

Importantly, Permex’s 6.500 acres are held by production. The company can continue growing production with its phase-one ‘sustainable growth’ operations while waiting for the right opportunity to aggressively scale things higher.

The company recently announced the cancellation of a non-brokered private placement.

Recent selling pressure in the stock was to blame.

We learned that this selling pressure was perpetrated by the company’s ex-investor relations (IR) firm whose contract had recently expired and was NOT renewed by Permex for good reasons. This prompted the ex-IR group to dump its entire position of nearly 1.5 million Permex shares into an illiquid market over the course of three days (beginning Mar. 8th, chart below).

Sour grapes? A group lacking a proper code-of-conduct based on moral principles, ethics, and common sense?

What’s the deal fellas? Why’d you have to go over to the dark side?

Pranks like this inflict damage on multiple levels. Yes, it punished Permex, but it also hurt the individual shareholder – the small guy. In the big picture, it undermines the market itself. It erodes confidence and turns people away.

This reckless, not-for-profit stunt forced Permex management to cancel the PP, but it was the right move. A less disciplined management team would have considered “amending the terms” of the PP, lowering the price and dishing out an assortment of dilutive bells and whistles. Not this crew.

The company needs to let the dust settle before it considers a future raise.

Of course, Permex has other options:

With a little under 36 million shares outstanding, the company’s share structure is super tight. With its stock currently trading in the $0.14 range, this has to be considered one of the most out-of-whack valuations in the entire resource arena (author’s humble opinion).

You hear about those profs who teach the efficient market hypothesis, the theory that current asset prices are correct and fully reflect all available data? Morons!

Anyone positioning themselves in Permex common at current prices will be getting in before the growth curve starts.

Full disclosure: Permex is an Equity.Guru client. We own the stock.