Pumping out an average of 330 barrels of oil equivalent per day (50 percent oil), Jericho’s Swordspear 15-23N-10W No. 1H  has been running for 160 days. Swordspear is the company’s first Osage formation well in its joint venture in the STACK.

Jericho is using an electrical submersible pump in the well. That type of pump can handle high fluid volumes. According to Jericho Oil, both the strength of the well and the projected longevity of Swordspear’s potential production give JCO.V a lot of confidence in its northern STACK operations.

Jericho’s focus this year has been on unconventional resource extraction like those offered in the Anadarko basin STACK of Oklahoma.

Brian Williamson, Jericho Oil’s CEO, said in a press release he’s happy with the results of this first Osage formation well. “We will look to improve even further upon our future development as we continuously integrate real-time drilling, completion, and production data into our geology and engineering models.” 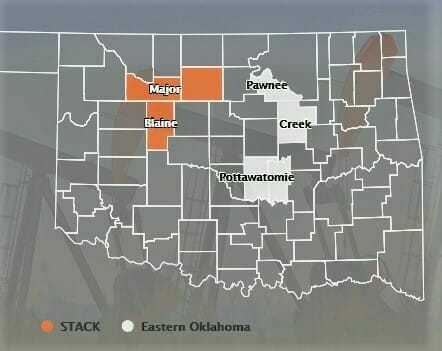 The STACK acronym also hints at how the resource extraction formations pile up beneath the Oklahoma topsoil. The underground formations include: Chestermanning, Meramec, Osage, and Woodford. (See picture below.) 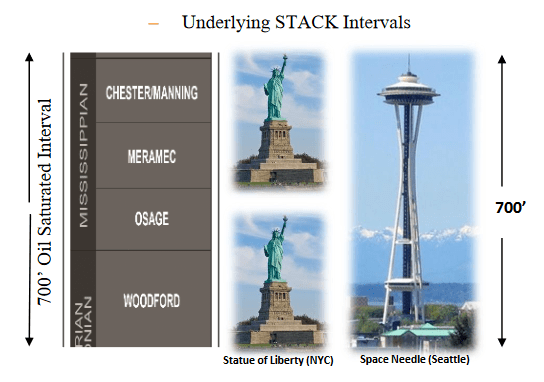 The oil saturated intervals that “stack up” below the surface of Oklahoma’s STACK oil extraction zone.

In the northern portion of their STACK acreage, Jericho is achieving renewed success. The company is moving outside of the traditionally proven areas where wells have been successful.

According to Jericho, this takes “significant investment in actively drilling new wells in the same oil field, studying the geology where these wells exist and honing in on a repeatable completion technique.”

At Swordspear, Jericho is collecting heaps of data, which will be combined with data from other wells in the area, to provide a data stream that will improve Jericho’s understanding and knowledge of the oil fields. This information will be paramount in helping Jericho decide on potential developments in the STACK and to report on the value of its resources in the STACK.

Williamson notes when Jericho’s successes from 2018 are rolled together with exploration and development targets for 2019, the combination offers exciting potential upside for shareholders and investors.

“Our current well results and our 2019 planned development—coupled with surrounding marque peer wells planned for Q4 2018 and Q1 2019—will provide a springboard of net asset value for our STACK joint venture.”

Jericho’s primary business objective is driving long-term shareholder value through the growth of oil and gas production, cash flow, and reserves. Jericho has assembled an interest in 55,000 net acres across Oklahoma, including an interest in about 16,000 net acres in the STACK play. Jericho owns a 26.5-per-cent interest in STACK JV.