To state that Oil has been through some tough sledding in recent sessions would be a colossal understatement. After recently hitting the skids for an unprecedented twelve consecutive sessions, this decline represents a rout never before witnessed.

Looking at this chart, you’d think global demand had fallen off a cliff.

Aside from Trump telegraphing warnings to OPEC not to cut production, there seems to be a perception out there that oil is fast becoming obsolete, that it’s going away, that the global shift toward a greater reliance on EV’s (electric vehicles) will render it a useless commodity overnight.

Not true. Not by a highway mile. The Big Three automakers continue to crank out traditional gas-powered vehicles, producing more in a single day than Tesla will in an entire year. Global oil consumption could top 100 million barrels per day going into 2019.

This next oil chart depicts the last five years of trading. The $50 level looks as if it could represent a fairly decent support zone. It’s also a big round number.

The market often succumbs to these big round numbers as if by some powerful gravitational pull.

My take of this support zone (horizontal line drawn in blue): a decent bounce from here, if not a bottom, could be in the cards short term.

For sure, the rumblings coming out of the Whitehouse and OPEC will continue in the weeks and months to come. For sure, the volatility we’ve witnessed recently will have made its masterpiece by year-end (Bill Shakespeare voice). But this current situation could represent a rare opportunity to back up the truck on asset rich companies at deeply discounted prices.

As the Chinese have been preaching for centuries…

The evolution of an aggressive small-cap oil company…

Jericho Oil Corp (JCO.V), a micro-cap in the oil space, is one of those rare company’s that had the foresight to stoke up its treasury while the going was good, before the market imploded several years back. With roughly $13M in the company coffers, it went looking for the right opportunity.

That opportunity came along in the mid-continent of the US – Oklahoma. Today, the company boasts an enviable land position of some 55,000 acres, including 16,000 acres in the Anadarko basin STACK play of Oklahoma. 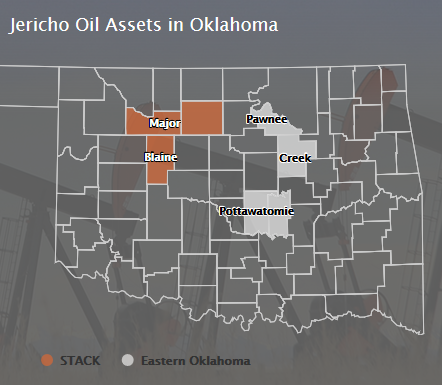 According to the Fraser Institute’s list of the Most attractive jurisdictions for petroleum development, Oklahoma ranks number 2.

If you are small – relative to the size of the true giants in the industry – you need to be focused. You need to appreciate the opportunity-set in front of you. And you need to know the marketplace you plan to execute in.

By focusing on Oklahoma, they’ve completely mitigated the risk of any sudden systemic governmental shift that could take away their business. Local and state governments are more apt to move Heaven and Earth to see that wells get drilled, and assets get developed.

Nearby communities are tied to oil production. They’re immersed in the culture and fully appreciate the many dividends oil production can generate.

Jericho acquired their position in the STACK for an average of $2,300 per acre. Today, those acres are fetching better than $15k per.

All of the these acquisitions have been drilled in the past. Jericho know there’s a significant resource there. They know the field is productive. They know the oil is extractable.

While the company was in the process of picking off properties on the cheap, they gained the support of three significant shareholders, each taking down a > 10% interest in the company. The names include the likes of…

Make no doubt about it, this 10% plus club represents solid votes of confidence in Jericho’s underlying fundamentals. They represent long-term shareholders, smart money, and strong hands.

Another benefit of engaging these strategic shareholders: No investment banks. No finders fees. With this management team, every penny is a prisoner. 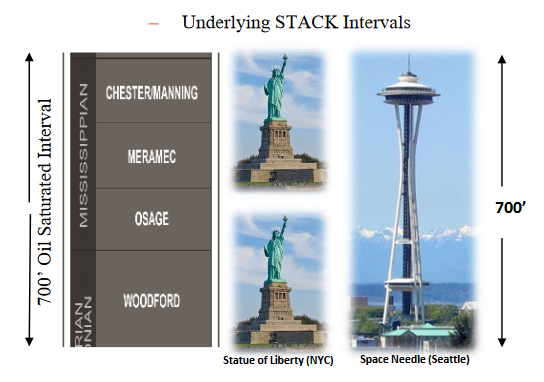 It’s important to understand that the area is dominated by a handful of large producers – Continental Resources, Devon Energy, Marathon Oil, Alta Mesa Resources, Newfield Exploration, and Chesapeake Energy. These companies have poured billions of dollars into developing their STACK assets. Jericho has positioned itself in the land of giants.

Encana to buy Newfield Exploration for $5.5B US

The recent takeover involving Newfield’s assets pound home the intrinsic value here – the price producers are willing to pay for these STACK assets. 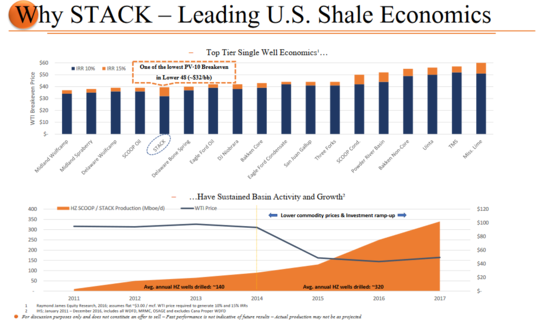 Another factor driving investment in the region: your typical 1-mile horizontal well produces approximately 500,000 to 1,000,000 barrels of oil equivalent with rates of return greater than 75%. These are serious numbers.

The pennies-on-the-dollar bargains Jericho scooped up in 2015 thru 2017 are not there today. As the market for acres shifted from dirt cheap to overpriced, so has the company’s focus. There have been no acquisitions since September of last year. The company’s focus is now on development. And they have heaps of development runway.

Developing a well is not an overnight process. From a scientific POV, a lot of thought and methodical planning need to go into it. Be that as it may, the company has two wells in the bag and two more coming on.

The company also has a small working interest in two additional Osage formation wells, Ula and Hilltop, operated by ExxonMobil and Alta Mesa Resources respectively. Jericho’s participation in these wells is primarily to gain a greater understanding of the underlying subsurface geology.

Here, the company reported progress on the drilling, completion, and flowback of their most recent Osage and Meramec wells:

The highlights from this news release are as follows…

Brian Williamson, CEO of Jericho Oil, had this to say regarding these recent developments:

“The Company continues to deliver on its two-pronged strategy of delineating and de-risking our STACK acreage for the Meramec and Osage formations,” adding, “our second Meramec and Osage formation wells have given our team the added knowledge and confidence in our world-class acreage position. We continue to learn from each well and have put forth best practices on our Trebuchet well to decrease drilling costs in the lateral section. We are excited to provide further updates on the production of these wells by year-end.”

Though Jericho’s current focus is in de-risking and proving-up its 16,000 acres in the STACK, significant upside also exists within the company’s asset portfolio – some 40,000 acres – outside of the STACK. Their drill ready Osage Extension play in northeast Oklahoma is the only one example of a project with significant upside potential.

Equity Guru’s Chris Parry, during a recent conference call with the company, offered this take on the company, its assets, and development strategy. To paraphrase Chris…

‘Jericho has taken a MONEYBALL approach. They got in when everyone else was getting out. They got some nice assets on the cheap. They saved themselves the trouble and expense by purchasing assets that had already been explored and tapped into. They have competitors coming into the area and purchasing assets next door at significantly higher valuations to the prices they paid. They’re treating their money like it’s valuable. All of the above lowers the risk and sets up a nice growth play, even if the price of oil doesn’t cooperate.’

With 128.7 million shares outstanding and a sub-fifty cent share price, Jericho has an extremely modest market-cap of $61M. This price weakness is unlikely to last.

The company could be on the verge of dramatic production growth. Newsflow should be strong going forward.

Ultimately, Jericho’s goal, via a systematic and methodical approach to development, is to build a world-class blue-chip energy company.