Suffice to say, reports of Rob Anderson’s plan to slip away to Panama on a cigarette boat with a keel full of hundy’s and a trailing mist of martini mist and cocaine dust are greatly overstated.

The Green Organic Dutchman (TGOD.T) put out a note yesterday that CEO Rob Anderson had stepped down unexpectedly due to health issues and, honestly, I’ve never had more texts about a public company executive in my life over the two hours following.

Getting confirmed news from the company hasn’t been easy, because Anderson’s health is his own private business quite frankly, but the guy has had a decades long career in the public markets in Canada, so a lot of people want to know how he is.

Here’s what I know, cottoned together from double-sourced reports of those who know him best:

As he was boarding a plane to Canada a few days ago, chest pain, then lights out, then woke in a hospital bed. No warning.

He’s currently home with his better half, recovering and, reportedly, still firing off directives to his soldiers because, as anyone who knows Anderson understands, he’s never not working. Even in hospital.

I commented on this company work-rage in my most recent TGOD piece, where I called comms guy Danny Brody an asshole for not letting me get any peace and quiet through the summer with his damn news releases.

Brody: Have you seen the news we just put out?

Me: No, you just put the news out.

Brody: It’s great. Everything is coming together.

Me: Okay, but I was hoping to get a little time off through the summ..

Brody: We have another one coming out tomorrow. Be a great story.

Brody: I gotta go. Another call coming in.

This has been the TGOD way since its inception. They don’t sleep. They have a war room. They’re like Santa’s North Pole toy factory but for weed deals.

Contrary to twitter conjecture that he’s about to fall into a mountain of free trading stock and concocted a health scare to justify a massive sell-off with no public filings due to him no longer being CEO, no.

Anderson bought his stock as everyone else did, and has the same holds you and I do, and, as it says in the company news release talking about his stepping down, they’re ready to welcome him back at any time, doctor’s orders pending.

Mr. Anderson will continue to be available to assist the company as required. The board of directors, management team and all staff wish to thank Mr. Anderson for his tireless efforts and valuable contributions to the rapid and successful growth of the company and wish him a successful recovery. Once Mr. Anderson has fully recovered, the company would welcome his return in any suitable capacity.

Of course, that hasn’t stopped the short sellers and cynics from piling on.

Twitter has been a fairly vile place through this ordeal, it must be said.

Getting so much hate mail today. $Tgod CEO can sell his escrowed shares for health reasons. You’re just disgruntled a bag holder. Rob Anderson cashed out $100,000,000 and went to panama so he can avoid paying taxes. https://t.co/H1CjUA1FH3

Alternately, he may have just had a medical episode.

His abrupt resignation is suspicious. Rob Anderson could have taken a leave of absence for a determined period set by his doctor if true. Instead he used a weak excuse to quit without providing a four week notice as required by his employment contract $tgod

Translated: Hey, hope your heart gets better and you don’t die, but shouldn’t you be filing documentation to verify my unsubstantiated claim that you’re dodging taxes and faking a near death experience leaving everyone you know and the company you built behind?

Here’s the only thing you need to know if you’re trying to decide if Anderson is fleeing to the islands with everyone’s cash: He’ll get way richer actually running the business and growing it, than he’d get selling into the bid today.

Ask Cam Battley at Aurora (ACB.T), who is also on the board at TGOD and bought a fat stake in the company through ACB, whether he would have done better running off to Rio with his early Aurora stock after four months in the job there, or sticking it out while he 10x’ed.

And if that’s not enough reason to laugh at the Twitter rumours, trading volume on TGOD is normal  – even low – and the price appears pretty stable.

The TGOD folks are developing a hard outer layer right now, because this online bullshit isn’t the first situation they’ve had to deal with that came from the great blue online sewer where folks spot that big price spike and think there’s money to be made in damaging it.

I’ve been told by several sources that an individual composed what he called a ‘gamechanging’ report that would turn the market upside down on TGOD, and demanded six figures from the company to bury it.

The company looked at his ‘report’, shrugged, and said ‘do your worst.’

Then the extortionist tried to sell them a package of marketing videos. Lawyers have been involved.

That same individual pulled the same routine on other companies I’ve talked to, all of whom told him to pound sand, with others also stating they had to involve lawyers.

But none of those were dealing with a short seller wave, a CEO in a hospital bed, and extortion threats all at once. 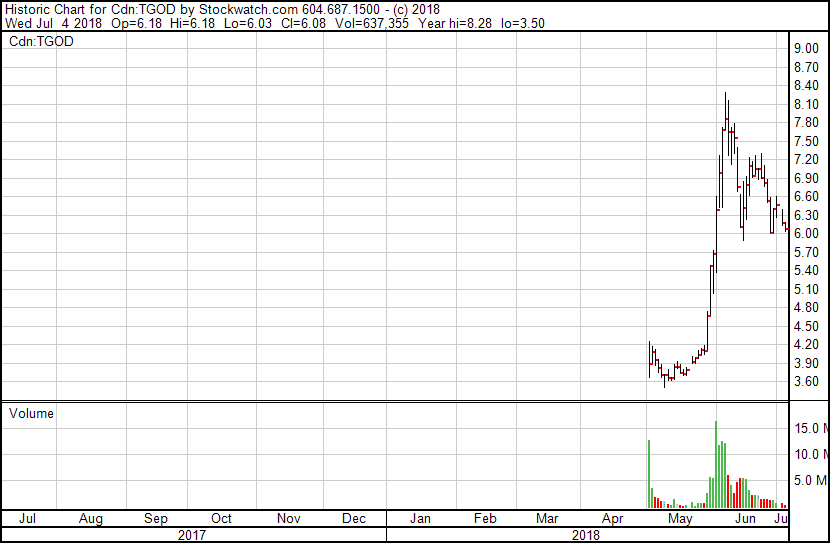 Considering the potential for disaster, with a stock that had run super hot almost right off the bat, the elves at TGOD have held up well.

Though the stock is off its high, that actually makes a lot of sense to me, which is why I said on Twitter a few weeks ago (and at around this price) that folks should take profits – even though they’re a client company.

If you did, well done, but don’t expect the company to get slammed back to where it was when it started. If you want value, something around this level may be it.

The big knock on TGOD from the outset has been, at some point, a lot of you early investors (and we’re proud that we brought a lot of the 4,000 private financiers into that deal, and at such a good price) are going to sell off your free trading stock.

NOTE: This will undoubtedly happen. It should happen.

I mean, how else you going to afford to execute all your in the money warrants?

When it landed, the company’s challenge was to defend it’s $3.65 starting point as realistic. It did that with early trading taking it beyond $4.30. Critics said that was overvalued.

Then, the company’s challenge was to propel itself forward in such a way that more people would buy in, and those early investors would see reason to stick around. They did that, as the stock ran beyond $7. Critics continued to bleat about overvalue.

Now, the company’s challenge is to find new ways to justify the present $6 range as being worth holding on to in November when the first paper comes free trading. They’re working that now, but a lot less people are harping on about value being hard to justify. This is evidence of execution.

Will the stock come back to $5.50? Maybe. It might also go the other way as the weed space continues to build new buzz and the company keeps adding value.

And not to Panama.

FULL DISCLOSURE: I’ve made bank off TGOD. It’s an Equity.Guru marketing client. I have stock. I have warrants. And you guys, if you’ve followed along, must be loving your $1.15 and $1.65 buy in point right now. Well played. Hope it changes your life.