Brody: Have you seen the news we just put out?

Me: No, you just put the news out.

Brody: It’s great. Everything is coming together.

Me: Okay, but I was hoping to get a little time off through the summ..

Brody: We have another one coming out tomorrow. Be a great story.

Brody: I gotta go. Another call coming in.

The TGOD juggernaut, and it is a juggernaut, is all momentum, all the time. They have a grand plan that they revealed to me a year ago, that involves quickly moving from growing to processing to products, and they know that it’s quicker to pick up the pieces of that plan on the open market than develop in house.

That means they move quickly and decisively. For all I know, they may not have a target ready to go for the $25 million in bought financing they just closed, but instead want to be able to pull the trigger when a tasty target shows up. They’ve raised hundreds of millions of dollars, and pretty much everyone that has ever been involved in those raises is in the green.

Aurora Cannabis (ACB.T) has a similar plan, to grow through acquisition, though at times they’ve overpaid for their puzzle pieces and how those pieces fit hasn’t always been apparent. They even bought a chunk of TGOD when it was coming to market, paying triple what our readers paid a year earlier, but having happily doubled their money in the months since.

Throw a rock in the direction of Markets Twitter and you’ll hit at least one person who is down on TGOD, with the rebound likely going to land on two guys who are up. 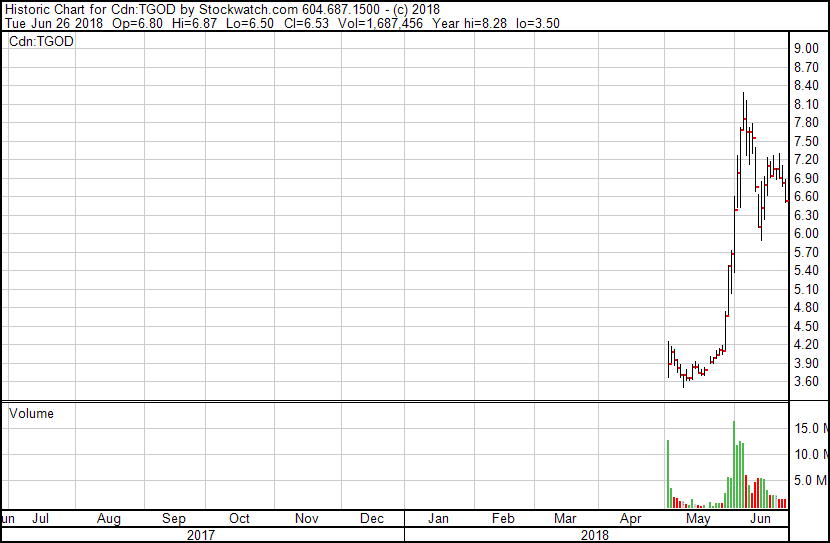 Again, congrats to our readers who got in at $1.15 18 months back, and to those who went at $1.65 several months before it went public. We’re doing okay.

And the guys who got in at the IPO at $3.65, including Aurora, are living the dream. Folks who’ve taken up their accelerated warrants likewise.

We see TGOD as going exactly in accordance with the long ago announced plan, but also advised about a month back – publicly – that taking some of your profits off the table would always be worth thinking about. If you got in at $3.60, near the low, as the stock touched $6 and $7, and then $8, you couldn’t possibly sit back and reasonably suggest that sort of lift would continue for much longer. You HAD to pull the handbrake a little. We certainly did, and told you about it.

Now, at $6.60, we’ve moved from the stage of ‘euphoria’ to the next stage, which is ‘evidence.’ Investors want to know, now, that TGOD isn’t just going to raise money and cheer itself along, that it will use this dip as a new base and bring deals flow that will lift it once more.

Well here’s the timeline on that from just this month:

As part of a $55-million R&D budget, Green Organic Dutchman is developing a 40,000-square-foot state-of-the-art research and development centre, including space for product development and pilot manufacturing. This facility is phase one of multiple phases within the 72-acre Valleyfield property designed to create novel and proprietary cannabinoid infused beverages. This facility will foster a first of its kind collaborative environment for joint ventures and partnerships that will create a distribution platform for domestic and international markets.

Green Organic Dutchman chief executive officer Robert Anderson said, “This launch allows us to engage larger beverage companies in a very unique manner as TGOD has the facilities, ingredients and the intellectual capabilities that make us a compelling choice.”

Green Organic Dutchman senior management has over 125 years of combined experience in the beverage industry, with international soft drink and beverage alcohol companies in Canada and the United States.

Effective June 8, The Green Organic Dutchman Holdings Ltd.’s wholly owned subsidiary, Medican Organic Inc., has received its cultivation licence from Health Canada for the company’s breeding facility in Salaberry-de-Valleyfield, Que. The commissioning of this facility will allow the company to create proprietary, organically grown strains of cannabis and cannabis seeds.

Located on a 72-acre property, the breeding building will house the cultivation of cannabis and the production of seeds and new strains. This building marks Green Organic’s first facility in Valleyfield, which will be followed by the addition of Green Organic’s flagship 820,000-square-foot state-of-the-art hybrid grow facility, which, when complete, will bring Green Organic’s domestic production to 116,000 kilograms of high-quality, premium organic cannabis annually.

So they have plans for drinks, which will use their own grown weed, from their own organics started in Quebec.

Jamaica LOVES its weed, and this company TGOD is partnering with is licensed for everything – including, importantly, retail distribution.

Jamaican dispensaries, known as herb houses, are crucial to the distribution of cannabis in Jamaica. Epican, with its first mover advantage, is opening its flagship dispensary in July, 2018, located in Kingston, Jamaica. This will represent the first of many Herb Houses, with several more to be completed by the end of 2018 including locations along Jamaica’s northern coast. These locations will serve the medical needs of Jamaica’s three million residents and approximate 3.5 million visitors each year.

What else, Danny? what other fucking wizardry do you have planned that will prevent me spending a few days in peace at the cabin, you voracious workaholic asshole?

The Green Organic Dutchman Holdings Ltd. has decided to add a 287,245-square-foot purpose-built facility on its Valleyfield property capable of producing 40,000 kilograms of premium organic cannabis. This facility will be dedicated to TGOD’s beverage division and increases the company’s fully financed capacity to 170,000 kg.

Due to operating efficiencies within the 72.4-acre Valleyfield property, permits and cultivation licences granted, the company anticipates a significantly reduced construction timeline and budget. The company will build this facility using excess cash raised in its initial public offering and subsequent bought deal financings. With the synergies to be realized on the existing 72.4-acre Valleyfield property, the construction timeline and unit costs for this additional building enhance the overall economics of the entire facility.

Sure. Okay. So where are you going to get the money?

The Green Organic Dutchman Holdings Ltd. has closed its bought deal financing of 3.91 million special warrants of the company at $6.40 per special warrant for aggregate gross proceeds of approximately $25-million, previously announced on June 5, 2018. The offering was conducted by a syndicate of underwriters led by Canaccord Genuity Corp., acting as co-lead underwriter and sole bookrunner, on behalf of a syndicate of underwriters including PI Financial Corp. as co-lead underwriter, and Mackie Research Capital Corp.

So, like, everyone is just lining up to hand you guys money and you’re knocking deals out of the park and the share price is basing out and okay – I’ll say it.

Time to think about buying on the dips.

What you, as a canny investor, needs to now start thinking about is, if I buy at this price, and this valuation, how do I feel about the company’s likelihood that they will continue growing and expanding, and yes diluting, and what do I feel are the chances that in the money early investors will hold their stock, or add to their stock, rather than flush it when things come free trading?

You’re a different story. You need to weigh many options involving your own estimations and beliefs.

There are a lot of shares out there that currently can’t trade, and cynics look at TGOD and think that’s going to be a bad day, when they’re able to be sold and profits are able to be locked in.

They’re not wrong. There will be down days.

I’ll say this: Right now, if you’re wondering why there’s been pressure on the stock despite the good news trail they’ve been on, there’s a reason:

24.4 million shares that have been traded from Jun 1 to Jun 14 were short sells.

That has put a lot of pressure on the share price, as a short is selling stock he hasn’t yet had to buy. The catch is, at some point, those shorters need to buy the stock to cover their trade. If TGOD can keep good news rolling out, and even push the stock upwards by encouraging new investors to come in, or existing investors to double down,, those shorters might find themselves in serious financial trouble.

TGOD boss Rob Anderson knows how to work the market and will definitely be aware of the shorts coming at him. Hell, he’s been that shorter before with other stocks in his storied past.

But now that his financing has closed, he can really begin the work of applying pressure to the shorters, and I’d expect his war room is going to be sharpening axes and lighting torches for the battle to come.

These are voracious market vikings, and they have a LOAD of their personal money tied up in the stock. Expect the streets to run red with the blood of the vanquished. Pick a side, paint your face TGOD green, and let slip the dogs of war.

FULL DISCLOSURE: TGOD is an Equity.Guru marketing client, and the author owns stock in the company.