If E3 Metals (ETMC.V) was an insect, it would be a Callidosoma Cassiculophylla – an ingenious Brazilian mite that uses the infrastructure of a recluse spider to gain access to valuable nutrients.

The mite hangs out, watches the spider build its web, waits for the spider to catch something, then charges forward.

E3 is a Petro-Lithium company aiming to produce commercial grade lithium from the Leduc reservoir formation, in Alberta.

Like the clever mite, E3 watched the oil and gas companies do the hard work (drilling) before moving in to claim its reward.

The oil and gas sector is said to produce more lithium than any other sector on the planet. Not by choice. It does so via the sheer volume of lithium-enriched brine it pumps to the surface along with its oil and gas.

Typically after the oil has been separated, the wastewater (and lithium) is re-injected back into the sub-surface chamber from which it emerged. A push is being made to recover the condemned lithium before it’s flushed back underground.

Getting the brine to the surface requires the same equipment, expertise and knowledge as the oil and gas industry.

The spider web has already been built.  The challenge is to figure out how to digest the prey.

This low-energy concentration step will require no evaporation and provide a concentrate that can be purified by most off the shelf technologies available on the market. 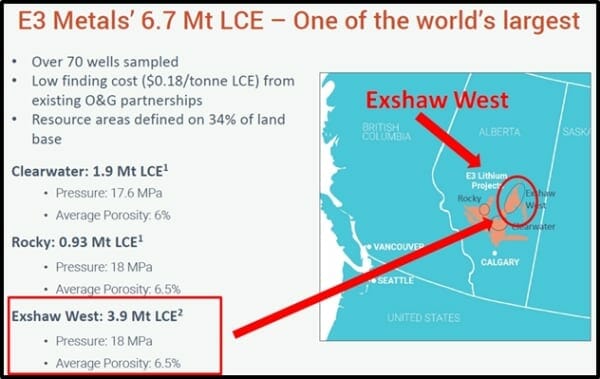 The report details “the addition of 3.9 million tonnes of Lithium Carbonate equivalent (LCE) resource (inferred) and includes the results of recent metallurgical testing of the Company’s proprietary lithium concentration technology.

“The data sources used for the mineral resource include well data from historical oil and gas operations and brine samples collected from currently operating Leduc wells by E3 Metals,” stated the report, “It is reasonably expected that the majority of the Inferred Mineral Resource Estimate could be upgraded to Indicated Mineral Reserves with continued exploration, enhanced reservoir resolution and sampling.”

The data in the above table can be converted from Lithium metal (tonnes) to Lithium Carbonate Equivalent.

“As a producer of raw materials, E3 Metals will not be able to sell Lithium directly to an off-taker,” stated the report, “It is useful for the company to convert lithium to lithium carbonate equivalent using the following equation:

The LCE contract price in North America is currently about CAD $20,000 per tonne.

Let’s be clear.  This back-of-the-napkin math is based on an “inferred” resource, which has lower standards of verification then the “indicated” category.

We are not suggesting E3 is worth $78 billion.

But E3 has locked-down the rights to whack-load of lithium, and its pathway to cash-flow is much shorter (quicker) than a traditional mineral explorer. 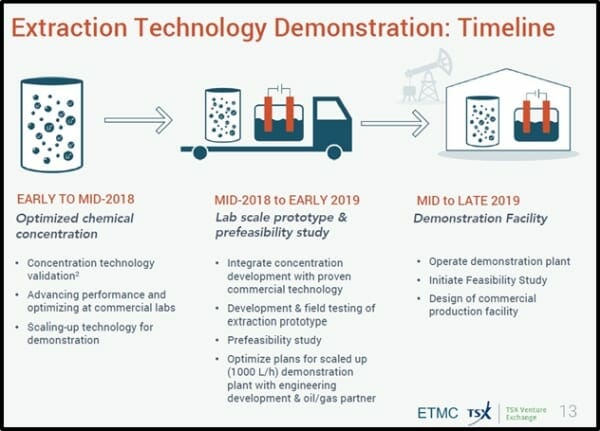 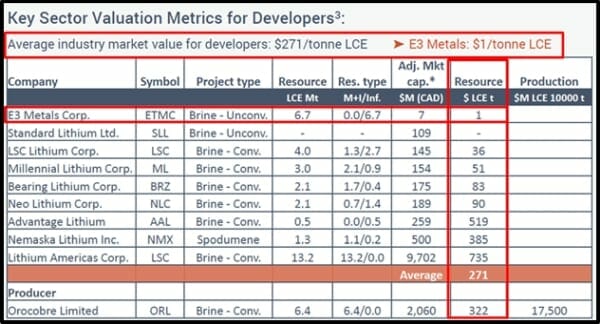 With high porosity and permeability, the Leduc Formation has demonstrated the ability to deliver high volumes of hot brine.

According to the The New Scientist, the Brazilian mites are “too small to be useful prey for the spiders, and are not large enough to be a potential predator.”

E3 is a micro-cap stock, with a current market cap of $6.8 million.

If E3 can extract and process economic quantities of lithium from these Alberta wells, the company will transform from a mite into something bigger.

We’ve been writing about E3 Metals for fun because we believe in what they’re doing.

As always, if we think they’ve gone off track, we’ll tell you.

Full Disclosure:  E3 Metals is a new Equity Guru client, and we own stock.