E3 Metals (ETMC.V): one mother of a lithium resource in the Leduc Reef Trend 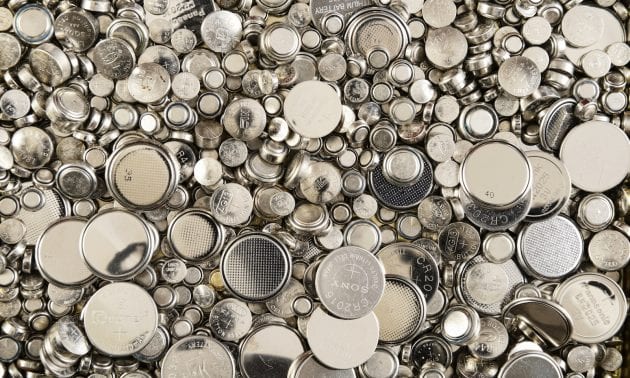 Here’s a thought: the oil and gas sector is said to produce more lithium than any other sector on the planet. Not by choice. It does so via the sheer volume of lithium-enriched brine, aka ‘wastewater’, it pumps to the surface along with its oil and gas. Nary a second thought is given to the lithium content within.

To an oil and gas producer this lithium-enriched brine is a royal pain in the ass, and it’s dealt with accordingly.

This ‘Petro-Lithium’ is to petroleum production what waste rock is to gold production.

If you’re unaware of just how consequential this ‘battery metal’ is to our species at this juncture in our technological and environment-salvaging evolution, how our appetite for these metals is expected to grow in the years to come, how industry giants around the globe are clamouring to lock down a proper stash, I’d be tempted to ask how many years you’ve been MIA, lost at sea, or holed up on a desert isle with Wilson.

Lithium (Li) is a highly sought after metal. It’s the lightest of all metals on the periodic table, one which demonstrates some pretty crazy electrochemical dynamics.

Lithium has a number of applications and uses, but it being a key component in the manufacture of high capacity rechargeable batteries – batteries used to power EV (Electric Vehicles) – is what all of the current rage is about.

And demand for this light, electrochemically frenetic metal is expected to grow as the EV revolution continues to gain momentum…

Obviously, not everyone regards petroleum brine as waste. A push is being made by innovative, think-outside-the-box types, to recover the condemned lithium before it’s flushed back underground.

It all begins with a producing oil well.

When oil comes out of the ground it’s accompanied by a large volume of water. These two conflicting elements then undergo a divorce via separation processing.

After the oil has been separated, the wastewater (and lithium) is re-injected back into the sub-surface chamber from which it emerged.

The innovative thinkers mentioned above likely ruminated on the situation, objecting to the contemptible waste…

The question they all likely arrived at was, ‘could a water processing technology, one which extracts lithium, be installed as a link in the processing chain prior to it being re-injected back into the resevoir‘?

The men and women behind E3 Metals Corp (ETMC.V) obviously did their fair share of ruminating. Innovative in their thinking, they spotted the opportunity and set their sights on the prolific Leduc Resevoir in Alberta.

Not all oil and gas reservoirs contain lithium. The Leduc resevoir has lithium… and lots of it.

E3 Metals holds one of the worlds largest lithium resources. After releasing news of a third resource contained within their Leduc Reservoir holdings earlier this month, the company now boasts some 6.7 million tonnes of LCE (lithium carbonate equivalent) in the inferred category. The resource has an average grade of 75 milligrams per litre Li.

It’s worth noting that only 34% of the overall Project Area has been systematically explored and sampled thus far. The above number is likely to grow, perhaps substantially so.

One of the major advantages E3 had in pulling together a resource of this size, this fast, was the low cost associated with the groundwork and data collection. The company didn’t need to drill a single hole.

When one thinks about exploration and delineation in the resource arena, one often thinks about the huge sums of capital plowed into probing the sub-surface in order to discover if there’s anything there… anything worthy of further spending.

Aside from having access to a huge volume of industry and government documentation detailing historic and current production in the area – info that includes lithium-content associated with the petro-brines in the Leduc Reservoir – all of the infrastructure is already in place.

Producing and suspended wells are spread out all across E3’s project area. The holes have already been drilled.

Garnering excellent support from oil and gas operators via fourteen collaborative relationships, E3 was allowed a thorough, systematic, and accurate sampling of the petro-lithium brine sloshing around in the reservoir below. In some cases, this sampling was performed to simply confirm the data that had already been compiled in the historical record.

The next step, upgrading the current resource into a higher confidence category (measured and indicated), can be accomplished in a similar manner, with minimal work and cost.

With an average grade of 75 milligrams per litre Li, large volume will be essential, as will the scalability of their operational design plan.

While the Leduc Resevoir grade isn’t exactly sexy – hovering around the lower end of the current lithium industry production grade curve of approximately 80 milligrams per litre – the resevoirs capacity to accommodate literally tens of billions of litres of lithium-bearing brines most certainly is. Flow rates are known to be exceptionally high.

Here’s the rub. The company envisions installing a technology – a lithium extraction/concentration system – along the processing line where lithium is extracted prior the wastewater being re-injected back into the ground. This is no simple task. Lithium recoveries will need to be high. Impurities will need to be kept to a minimum. 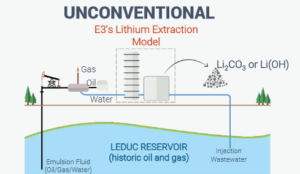 Note that the final stage in the process, the purification technology to produce battery grade material, already exists. No worries there.

The company is working on this critical extraction/concentration technology on two different fronts:

The University of Alberta: the company has partnered with the U of A. The people behind this research are top-shelf scientists in terms of geochemistry, environmental microbiology, water treatment, clean technologies, innovative natural products, and colloidal chemistry. Their resumes speak for themselves.

The goals of this collaboration involve research and development in both pre-treatment and direct lithium extraction methods. As such, the U of A aim’s to develop a technology capable of direct lithium extraction without the requirement of pre-treatment of the brine, or a method that requires only minimal pre-treatment. In parallel, they will research and develop methods of pre-treating water for the filtration and precipitation of Calcium and Magnesium. Through these efforts, they aim to develop a clean lithium extraction technology that improves extraction efficiency, minimizes costs and improves lithium recovery from brines. The Alessi lab has already begun the initial research potion of the work and plans to initiate the testing with some of the first brine samples collected from our permit areas.

The U of A’s laboratory is equipped with state-of-the-art instrumentation, everything a beautiful mind requires to characterize brine metals chemistry.

Third Parties: E3’s Leduc reservoir is too large to ignore. If for whatever reason the University of Alberta partnership doesn’t produce a viable, cost-effective technology to extract and concentrate the lithium from these saline brines, the company will pursue a third party solution.

One such third party that comes to mind is MGX Minerals (XMG.V). They’ve developed a proprietary process using advanced nanomaterials which apparently creates a decent separation of oil, ore, water, and other pollutants.

Cool beans! A technology exists. Of course, E3 would prefer to develop their own proprietary seperation brand, hence their partnership with the U of A.

E3’s project area is rich in infrastructure. There are thousands of kilometers of existing pipeline, highways, lease roads, etc. Grid power is readily available, but it may also be possible to harness existing geothermal power to drive production and processing, reducing the company’s Opex (operating expenditures) once in production.

The company envisions an operation which will incorporate multiple production feed streams from a number of existing wells – a hub-and-spoke approach if you will. The lithium-enriched brine will all flow to a central processing facilty where the Li will be extracted, concentrated, and purified to produce high-grade lithium products.

If all goes according to plan, the production design on the diagram below will be the model that falls into place… 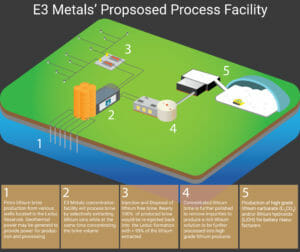 The final design needs to be scalable. The goal is to produce 10,000 tonnes of lithium carbonate equivalent per year, ultimately scaling up to 50,000 tonnes of LCE per year.

Some might view the company’s push to demonstrate their ability to extract lithium (economically) at a grade 75 milligrams per litre as somewhat aggressive. News over the coming weeks and months should add depth and clarity to E3’s progress on that front. 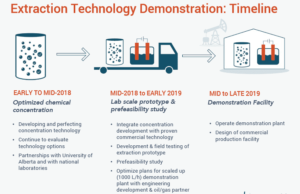 E3’s management team, lead by CEO Chris Doornbos, have solid technical backgrounds in the oil and gas sector. I think I even spot an ex Calgary Flames defenceman in the lineup – one serially successful Paul Reinhart.

This is a rapidly evolving story with a number of moving parts. I’m expecting E3 newsflow to be fairly steady over the coming weeks and months.

I look forward to developments on the technology front, along with news concerning the project’s grade. The magnitude of the resource itself will likely be subject to multiple upward revisions.

This is one to watch.

Full Disclosure: The author does not own shares in E3 Metals.