In the old days of my business analysis writing career, I sometimes had to find a way to write something nice about my employers’ client companies that didn’t necessarily warrant positive press. That’s the problem with working for other people – they make the rules, and you either go with it, or you leave.

I left. This is why Equity.Guru now exists.

When I say something nice about a given company now, it’s based around a firm belief in my own words and a public vow that client companies don’t get off easy, as opposed to blind optimism and hope. Every company we write about, be it as part of a commercial arrangement or because we think the story is just plain interesting, has to pass the smell test and always put the shareholder first, or risk being crapped on from a great height by us.

We don’t ‘sell’. Frankly, there’s no ‘sell’ required if you’re working with companies that are doing the work. They may or may not succeed over the long haul, but at least we’re starting from a place of reality and a fair warning that we’ll either be their biggest supporters or their biggest abusers, depending on how they do business going forward.

So when I wrote nice things about Mexico oil explorer/producer Renaissance Oil (ROE.V) a few weeks back and it went on a run, that was a beautiful thing, because nobody had been talking about oil and gas as a place to put your money for a while and clearly others were seeing what we were seeing.

And when Greg Nolan was tasked with covering new Equity.Guru client International Frontier Resources (IFR.V) last week, and being brutally honest about whether he thought that neighbouring Mexican oil play was fluff or gung ho, I love that he too liked what he saw.

And when I covered East West Petroleum (EW.V) a few weeks back, a stock that had been ignored by everyone for a long time but which seemed to be showing signs of renewed life, I’ve been enjoying the number of folks in the financial markets who’ve said to me, online and off, “Hey, that East West Petroleum is interesting, eh?”

Oil and gas stocks are making a move. Which is weird, because the conventional wisdom form guide on oil over the last few years has been, “It’s toast. Buy lithium.”

Maybe it is, in some areas. It’s tough to make a solid profit on Alberta’s oil sands bitumen, as it’s expensive to process and moving it to the coast continues to be a political football. 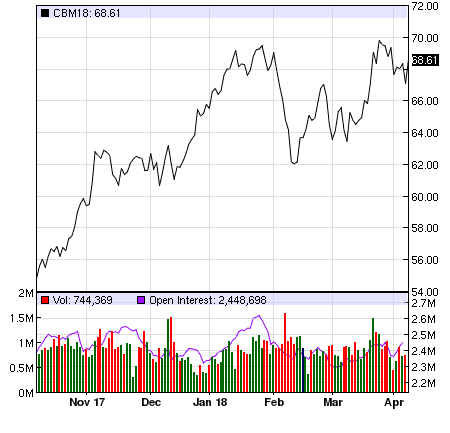 The price of Brent Crude is up over $65 per barrel consistently now, the price at the pump has never been higher, and certain countries in the world are finally becoming aware that opening their resources to private companies can bring a quick return that lumbering state-owned monopolies tend to not be able to.

Renaissance exists in the world because Mexico got sick of the state owned Pemex corporation shrugging its shoulders at shale opportunities because it had what it needed offshore. When they opened up the oilfields to outsiders, Renaissance jumped in with both feet.

And International Frontier is right in there alongside Renaissance, throwing elbows at some of the world’s biggest players and grabbing for themselves some really interesting patches.

Mexico’s historic energy reform announced in 2014 has established a new legal framework for Mexico’s energy industry and is expected to attract the billions of dollars in foreign investment needed to revitalize Mexico’s oil and gas industry. The Secretaria de Energia (SENER) has issued a five-year, four round tender plan (2015-2019) for the denationalization of 914 oil and gas blocks. IFR believes that there are a significant number of under exploited oil & gas fields in Mexico that will be issued in these bidding rounds.

You don’t hear the phrase ‘denationalization’ often these days, because it doesn’t tend to exist without a framework of war around it.

You could say the Americans ‘denationalized‘ Iraq’s oil and gas fields when it liberated the country from Saddam Hussein. The Libyan oil fields have been in disarray since they were denationalized by warring factions, NATO regime change, and local tough guys knowing how to turn off pipelines for ransom.

But an orderly denationalization? That’s a rare thing.

To be able to take an underexploited national resource and turn the spigots on for private and public financial benefit, without overthrowing a warlord, is a big win/win, especially when the first movers are little Canadian pubcos with low market caps.

In Canada, the continuing debate over pipelines, and the high cost of processing oil sands product, has left the local oil and gas sectors imperiled. In the US, fracking has opened a lot of production opportunities, but they require a continual churn as they deplete quicker than traditional oilfields.

OPEC countries have agreed to limit production in order to drive oil prices up to a place where they can be profitable again, and Venezuela can barely feed its people, let alone find new resources to explore. Europe requires a scary amount of product that can only come from Russia, leading it to be open to paying more from others, if others become a viable option.

But Mexico is different. It produces enough offshore oil to pay for social programs, just not enough to pay for an upgrading and updating of its national oil framework. So it’s looking to outsiders.

In essence, come take our oil, just leave some cash on the nightstand when you’re done.

From Greg Nolan’s look at the Mexican system from last week:

These Mexican assets are highly desirable. The auctions Int Frontier are attending involve mature onshore fields with proven oil reserves and a history of drilling.

In auctioning off these mature onshore blocks, the Mexican government is welcoming bids from oil and gas companies of all sizes, including juniors. Aside from establishing a platform for healthy competition, it creates equitable opportunity across-the-board. This is how it’s done. This is dynamic, innovative, and enlightened thinking. I suspect the country has learned its lesson – the immutable fact that state-run monopolies suck.

Also, that smaller companies that live and die on each well they own are likely to get things moving quicker than a multi-national that ranks exploring well down the list of its things-to-do, while it’s running operations in Europe, Asia, Africa, and any of several oceans.

What does IFR have right now?

Pemex used to own this block and piped out the easy stuff between 1956 and 1972, producing 1.9 million barrels of oil between the four wells therein. That’s a company maker for a public smallcap explorer, but for a monster like Pemex it was work. And getting deeper into those wells, especially at a time that was still a few decades before horizontal wells and 3D seismic data would become a thing, wasn’t on the cards. When you’re big, you take what’s easy. When you’re small, you work harder.

Now, IFR has the seismic data. 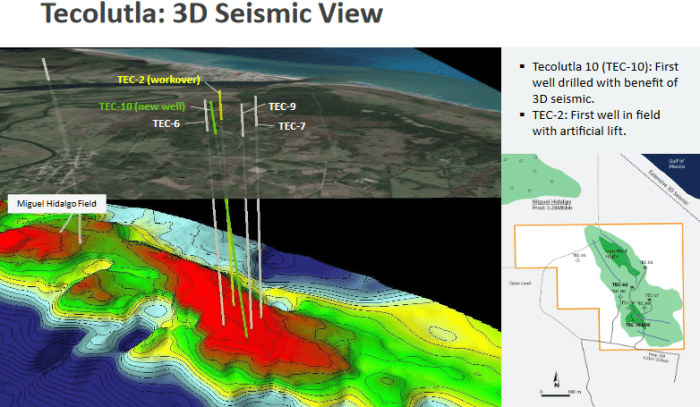 That big red patch? That’s the stuff Pemex couldn’t see back in the 70’s.

IFR will go there, and will do so quickly so that it can show what an asset it will be to Mexico to allow it to have more blocks of land going forward.

In that push, they have a partner in Grupo IDESA, one of the largest producers in Mexico. IFR brings the Canadian drill tech, IDESA brings the local knowledge and big boy presence that can make it easier to win further government land auctions going forward, and between them they’ve formed Tonalia Energia.

Here’s what Tecolutla looks like. The TEC-2 to TEC-9 wells were Pemex’s work, and they went deep enough to get a return.

TEC-10 is Tonalia Energia’s well, and it’s going deeper, and right in the middle of that big red 3D seismic bubble from above. TEC-11 will swing in horizontally to pick up anything the earlier wells missed. 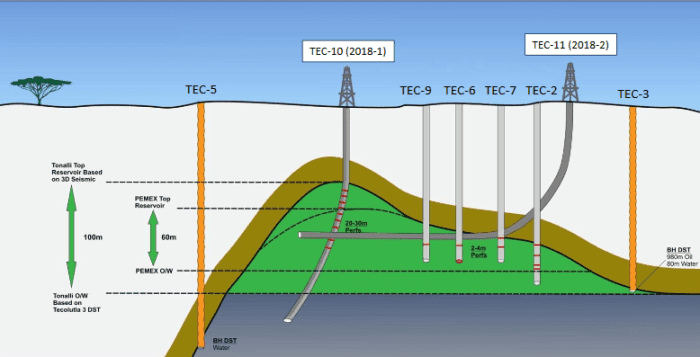 If the above looks fine to you but not earth shattering, perhaps a little scale will help. 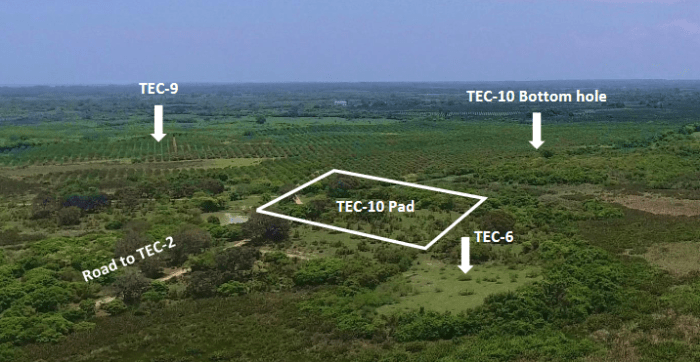 That mirrors Renaissance’s march (up 6% today), and the increase in activity at Romania/New Zealand-based EW.V ($0.08 to $0.11 in the last few weeks), and the rise in Brent crude prices.

Look, I want a Tesla as much as anyone does, but oil and gas is a long way from not being needed, even in the first world. Until we’re out of the plastics game entirely, and good luck with that, we’re going to need more and more, and a lot of traditional suppliers are running low, or having to go on short term project development sprees to keep the lights on.

We really like the Mexican oil possibilities, we really like how this company and Renaissance are handling their business, we trust in them that they’re going to handle their work fast and move to production ASAP should results indicate that’s a good course of action, and we love how cheap they are today.