East West Petroleum (EW.V): March Moneyball pick has been sleepy for a long time, but signs are promising

The only better thing than a company you buy into moving its stock price up is buying into said company when nobody sees it coming and it’s still cheap.

Last year we wrote about Azincourt Energy (AAZ.V) sounding like it was making quiet moves shortly before it announced some, we did the same with QMC Quantum Minerals (QMC.V) which ran hard to a 14-bagger, and Cobalt Power Group (CPO.V), and a few weeks back we did it again with Renaissance Oil (ROE.V) which has suddenly become the flavour of the month.

This one might not be the same hard mover. It may not move at all. The well is tight on this baby and nobody is talking, which could mean they don’t want word to spill out that there’s activity happening behind the scenes, or it could mean no activity is happening.

I go with the former.

EAST WEST PETROLEUM (EW.V): ASLEEP AT THE WHEEL OR HIDING IN PLAIN SIGHT?

I’ve ruined a lot of deals for the guys in the early stages of making them. Usually I’ve done this by talking about them before they’ve finished buying all the stock up for pennies from forlorn bagholders who assume the c-suite is empty.

I go out and say, “Hey guys, look at this thing that I found under this rock,” and suddenly the asking price goes up from half a cent to four cents and I get nasty phone calls from big investors telling me to STFU.

But to get there, I have to have my ear to the ground. This could mean getting a broker a bit drunk or watching SEDAR filings or having a data guy in the next room who jolts in his seat when he sees volume up x10 on something that hasn’t budged in six months. 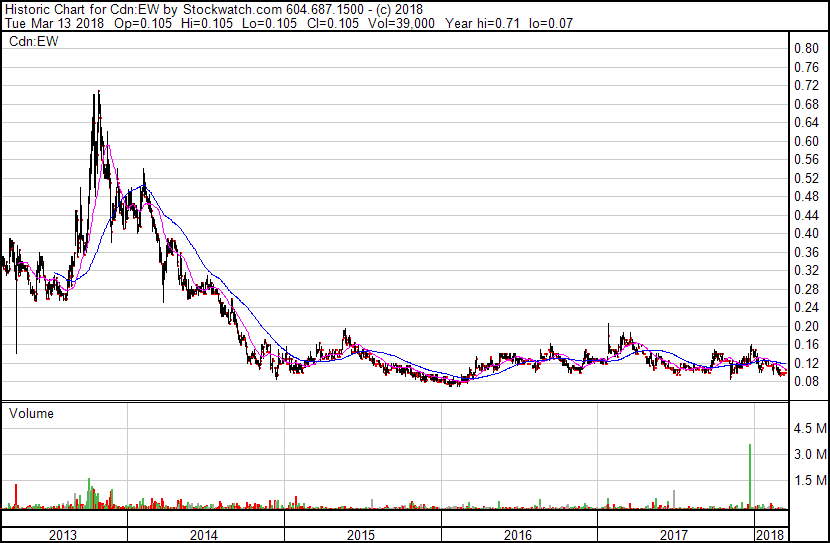 This chart goes back to 2013, when oil was king. That’s how far you have to go to find the last time East West Petroleum lived above $0.20. In that time, EW stock has drifted mostly between $0.08 and $0.16, with no volume worth speaking of. In fact, the level II on the stock usually consists of two guys looking to get some taco money.

For example, today the stock traded $4,000 worth of volume.

The tendency, when the daily stock trading of an oil company is less than the price of a 2003 Buick LeSabre (‘The Thinking Man’s Cadillac!’), is to ignore said stock as a ‘zombie company’ that just stays alive because nobody has thought to turn off the lights yet.

But sometimes the ghost noises and cobwebs aren’t accidental. Sometimes they want you scared out of the thing, so they can get in all cheap, like a Scooby Doo episode played out on the markets.

In late December, right before Christmas and when most traders were filling themselves on grandma’s terrible roast, someone went in and bought a load of EW for the first time since 2013. 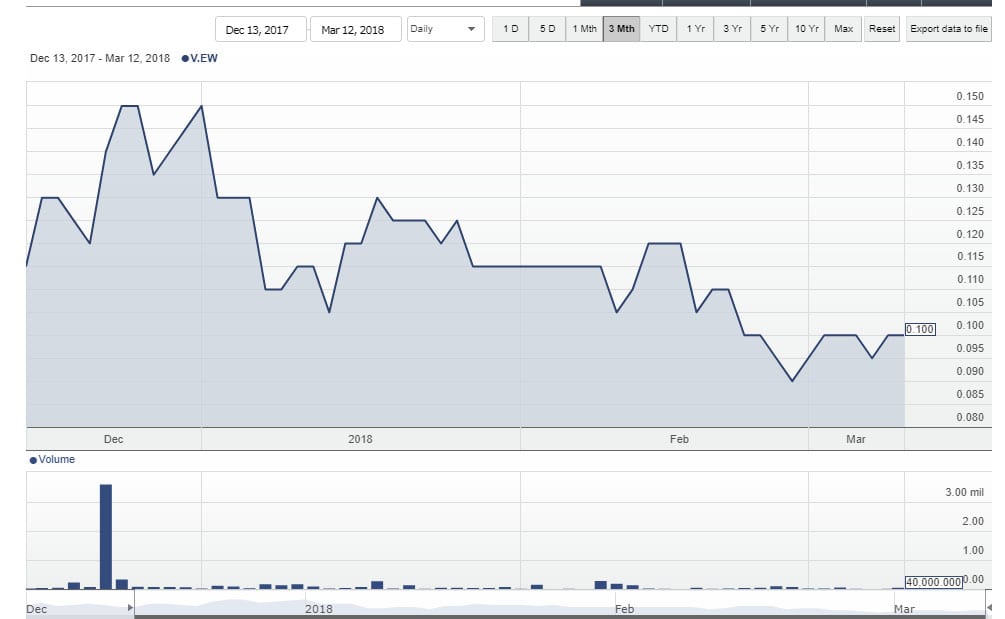 Right there on the left; that’s half a million bucks worth of EW trading on the open market, in a single day, or 100x the usual volume.

Again, that could mean nothing. But it probably doesn’t. People tend to pay attention to the whereabouts of $500,000, and unless someone was erroneously trying to buy a chunk of Entertainment Weekly, that much jam being dropped on EW is notable.

The buy coincided with news dropping, which normally isn’t a big deal. But with EW, spotting news is like spotting Haley’s Comet. For the most part, they put out financials, or updates on the drilling programs of their partners. But it’s yawny stuff. And I think they want it to be yawny.

Here’s what East West hasn’t told you yet: It’s in play with some monsters.

But it has operations in two countries:

Your eyes have already glazed over.

Well unglaze them and pay attention.

East West has three partner companies that are handling operations for them; One is TAG Oil (TAO.T), which is a $30m market cap TSX jam that pumps oil out of EW’s wells in New Zealand, and brings EW profitable revenue.

The second is NIS, which you won’t have heard of because you’re not lining up for gas in Serbia, but that company, which is worth some $81 billion and the most valuable single company on the Belgrade Stock Exchange, is 29.9% owned by the Serbian republic and majority owned (56%) by Gazprom NEFT (GZPFY.OTC), otherwise known as Russia’s mega oil company and the largest revenue making corporation in that country.

NIS is drilling EW’s properties in Romania, spending a fortune in doing so, and moving forward continually, while Gazprom watches from the wings, ready to pounce if something turns up nice results.

Also, Gazprom’s CEO plays golf with Putin, but no biggie.

Let’s get into details.

East West Joint Venture with NIS:
EW holds a 15% interest in four exploration concessions covering 1million acres in the Pannonian Basin of western Romania with Naftna Industrija Srbije (NIS). Because most of the text on the Pannonian Basin isn’t in English, we’ve done some digging for you to figure out what that means.

Thankfully, the American government has a vested interest in knowing where all the undiscovered oil in the world is hiding, and here’s what the USGS says (and you all owe us beer for having us me read through that bloody report to find this paragraph):

Undiscovered resources as estimated for the individual assessment units are shown in table 2. Collectively, these units indicate that between 153 and 631 million barrels of oil (MMBO) and 1.7 and 7.4 trillion cubic feet of gas (TCFG), at the F95 and F5 probability levels, remain undiscovered within the Pannonian Basin Province.

At the high end, in today’s per barrel oil prices, that’s $38 billion in oil lying about in that basin. NIS wants it. Gazprom wants the natural gas, which at roughly 7 quad of BTU (again, high end estimate) has a net worth of I have no idea but it’s about 2% of the entire planet’s natural gas supply per year so yikes can you guys lend me some money to buy EW stock just a little I swear I’ll pay it back..

NIS will fully carry the four properties through to production and have spent over 16 million Euros to date in getting to this point. To move to Phase II will require a total of 60 million Euros. That Phase 2 operation will be 100 % funded by NIS.

The NIS drill program is well underway, having started in January 2017, and the results obtained in the Teremia 1000 well recently indicate hydrocarbon deposits are present.

In fact, testing produced a fluid stream at a rate of up to 363 barrels per day, of which 49% is water and light oil products up to 177 barrels per day.

Light oil was tested from two intervals within metamorphic basement with gross rates up to 363 barrels per day (bbl/day) of fluid with water cuts up to 49 per cent (maximum gross oil rate 177 bbl/day). In addition, a total of five intervals were individually tested in Miocene sandstones, four of which flowed gas at gross rates in the range 0.74 to 4.27 million standard cubic feet of gas per day (MMscfg/d). The fifth interval flowed minor quantities of gas and condensate. The Teremia 1000 well has been completed as a potential future oil producer. A decision regarding the commerciality of the oil accumulation is expected to be taken when the results of future appraisal wells are known. In addition, as flaring of gas in Romania is forbidden, any oil production will require a technical solution for the use of associated gas together with acquiring the necessary permits and approvals for the infrastructure and facilities.

In layman’s terms: There’s oil in the first well, but extracting it economically will require oil in more such wells, which will cover the cost of building out a production plant.

Also, there’s gas in there which they’ll need to dispose of. Anyone know someone who wants it?

Let’s shift across to New Zealand for info on EW’s oil production there:

The Tag Joint Venture announced was in 2012 and has moved along steadily since then, to the point where, now, both companies are making revenue from it. More recently, Tag produced 1,151 barrels as of its last quarter and has tens of millions in infrastructure with no debt. They do the work, and East West takes a nice cheque. As they progress the site, the cheque gets larger.

The Waterflood Program announced in early 2017 continues to progress, and increased production volumes are expected in H2 of 2018, according to Tag news releases.

The beauty part for Ee-Dub is they receive Brent crude pricing for its oil in NZ, and Brent Crude is the type you hear about this is currently over USD$65 dollars a barrel. That’s up over 100% from the lows of early 2016 that drove Alberta to become a weed province.

Tag has successfully drilled six wells to date and has intentions to crank out more.

Ee-Dub is there. They’re earning money from New Zealand production that keeps the lights on. The most recent MD&A shows management isn’t taking an absurd swathe of salaries while the story is still developing, there’s money in the bank that covers the company for the forseeable future, and there’s news coming from giant partners who, at any point, could just drop the price of their annual catering bill on EW and take the whole thing out.

If they don’t, if all that happens is the big guys keep working slowly towards their goal, and the folks down under keep pumping out what they’re pumping out, at an $8m market cap, East West Petroleum is cheap. It just is. The upside is high, the downside is… they’re making money and spending barely any.

Not a bad down side.

We think all the pieces are here for something interesting to emerge in the next few weeks/months. The big partners, the near term revs, the potential for expanded drill results, the fat buying that happened on the last news and broke a five year dry spell… The reluctance of the company to tell its own story to this point.

None of this is accidental. Watchlist.

FULL DISCLOSURE: There is no commercial arrangement between East West Petroleum and Equity.Guru, nor any third party actively promoting the stock, nor do we own stock in the company, but we may purchase at any time.