So back in June we wrote a story about a company called QMC Quantum Minerals (QMC.V). At the time, it was a $0.095 stock and precisely nobody knew about it.

And there was no reason to know about it because it was, essentially, a sign post with an old picture on it.

As part of the story, we showed said picture, barely noticing that it featured a historical estimate. That is, until the BCSC called the company and reminded them that historic estimates can be a tricky business, compliance-wise.

So we took that story down, and others, and let the Qualified Person of QMC have at them with a red pen.

He made enough changes, with some time having passed, that we thought it prudent to bring the story back to the front, even though it was originally posted on June 9 and the company has since moved from $0.095 to $0.42. Frankly, there hasn’t been much news added to the story so it’s pretty much still relevant.

We called it a Moneyball Pick back then, reasoning that the market had just straight up missed it, and we were right. We’re pretty happy that anyone who discovered the play way back then, with our help, has had a multi-bagger in the time since.

So without further ado, here’s what we know about QMC Quantum Minerals, triple checked and QP’ed.

When a resource company hires a guy like me to make sure they’re in the conversation, but has no news they can publicly talk about and then their stock jumps 22.7% in a day while they are not answering the phone, a guy like me has only one thing to actually talk about:

What the hell is going on at QMC Quantum Minerals (QMC.V)?

QMC has three projects ongoing, but only one, the Irgon Mine Project is in the energy metals space that anyone is talking about. Why they’re talking about it is because Cat Lake was supposed to be Canada’s great lithium town back in the 1950’s, and the Lithium Corporation of Canada (such as mining companies were imaginatively named back then) spent all sorts of money plunging a shaft, moving equipment onsite, drilling, and planning for the town that would accompany the mine where all the workers would live and drink and screw their wages away. Many millions would be made.

Then the price of lithium crashed and the big city folk took their machinery away and left this: 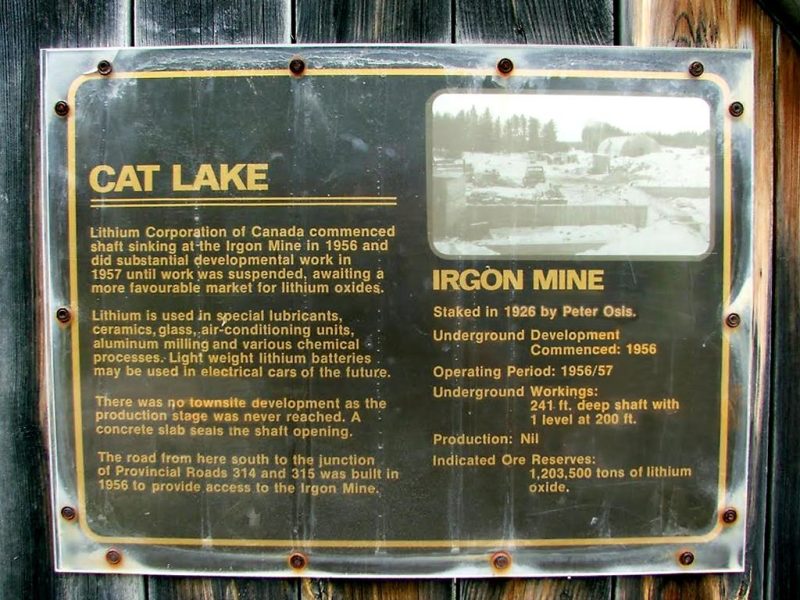 That fuzzy grey picture that the sun has beaten away to a shadow, is what things used to look like. If only those ‘electrical cars of the future’ would show up, eh?

The Cat Lake play has indicated historic reserves, as you can see on the sign, of 1.2 million tons of lithium oxide. Assuming that hasn’t rolled down the hill and been swept away by the currents of the last seventy years, it’s likely that lithium is still around.

And if you ask the QMC folk, they’ll tell you the lithium is around in great lumps of spodumene. In fact, those lumps are so great, they’ve tripped over them more than once.

Spodumene isn’t found in microbial bits, it’s found in huge ass pgematite dikes and though it costs more to process lithium derived from spodumene than it does to process lithium from the brines down in South America, it takes far less time to extract the lithium, it requires far less land to manage, and it comes in higher grades, making it worth the time taken to explore for more.

I can give you some scoop on that. This property was owned privately by some local yokels, with one guy financing its exploration over the past few years. That guy passed away, leaving the folks in charge of it not really sure what to do next. There was some arguing, some researching, but ultimately moving a mine forward just wasn’t what these guys do.

So, they looked to get rid of it.

QMC wandered around at exactly the right time and got it for the price of a Tesla.

That’s not something you’ll find in the corporate records, because back stories are flavour, not filings fodder. How do I know it? Because if I’ve learned nothing else in my decade-plus as a journalist, it’s that picking up the phone and calling the neighbours is a great way to get background.

This wasn’t so easy in this case because not many folks could call people out at Cat Lake, Manitoba. Mostly because there are no people in Cat Lake, Manitoba. You’ve got to go up the parks department road a ways, to a little landing called Bissett, or down the road to Poplar Bay, on your way to Winnipeg about 150kms away.

Cat Lake is located within Nopiming Provincial Park (no worries, in Manitoba, mining is permitted within parks), which is to say it’s part of a big old swamp. There are certainly more lakes than people out there, so it’s unsurprising that this highway marker to a town that never was, sat roasting in the sun (or freezing in the cold) for so long without some Vancouver rounder spotting it.

So, when a friend of a friend of these prairie farm folks called an old mining guy to see if he might know someone interested in an old lithium prospect, said mining guy got in the truck and took a long drive to Manitoba. At least, that’s the story I heard, from the non-company end.

I also heard, the area is a total swamp. That’s something you don’t want to hear, as a mining investor, but the upside is, the place where the dike is exposed and the old mine was planned is on a rise – a good-sized rise – that has been less affected by rising tides as one might expect over all this time, and likely to still contain what it used to contain.

That makes sense; you can’t plunge a mine shaft into a lake. At least, not one that will stick in the summer.

So, the story starts coming together a little more now. It explains why QMC got in so cheaply, and it explains why nobody came by before this point.

And then the stock jumped 22.7% in a day, which is not what you’d expect at all.

What are the QMC boffins finding around that old bog? Have they got a team of geos beating around in waders, poking the ground with sticks? Are they flying over it in drones and helicopters and looking for blips on a screen? When they crack the concrete cover on that old mine shaft and start pumping out old boggy water, will it ripple with the sweet, sweet lithium that we all crave for our Google Pixel phones next year, or will they find a race of underground mole people set to destroy us all?

QMC’s market cap is around $4 million right now. It was under $3 million a month long ago. The only people writing about it are me and a few robots scraping data for bullshit financial sites that Google should ban. It’s so early stage, it still has the shrink wrap around it and those finicky security ties that make your kid cry for ten minutes while you struggle to get their Christmas presents unwrapped.

22% up on a day is nice, but on a microcap company like this, that may mean three guys bought $5k of the stock. The reason so many mining guys love to get in on these deals is, hey, if it goes down, you may lose half your dough. But if it goes up, you may make a ten-bagger on just a little good news.

We know there’s lithium there. That’s not enough reason to buy the stock; there’s lithium everywhere. I think I have some in my pantry. Pretty sure if you searched behind my couch cushions, you may get enough lithium to power half a Tesla. The world is lousy with lithium, but it’s not so lousy with high grade lithium that’s easy to get to quickly.

If QMC spends the next year drilling, they’ll have receded back into the crowd with everyone else and will have missed a shot at stepping up to the big boy level. But if you see them doing things like building mills or hiring a workforce or doing financing deals that resemble mine construction capex rather then drilling expenses, understand that they’ve shifted gears.

And what this lithium market really needs right now – what it’s been screaming for – is for someone to figure out what they have, how they can process it, and who’s going to buy it.

Take me to the promised land, QMC. Yank some ‘spod’ out of the ground and say the words, “We can do this.”

If you bought QMC when we first talked about it, you’re up nicely. Congrats, but if this were a 100m sprint, the starter has only just said ‘set.’

FULL DISCLOSURE: QMC Quantum Minerals is an Equity.Guru marketing client, and the author has purchased shares in the company as part of its recent financing. I’m conflicted, but I’m also right there next to you guys.