The state-owned Mexican oil company, PEMEX, is on life support – its sickly bloodstream hooked up to an IV drip of foreign investment.

The once loud-and-proud energy giant is now paralysed and bedridden.

Steve St. Angelo’s well-written report, “Pemex is on the verge of Bankruptcy”, contains a couple of charts that tell the story clearly. 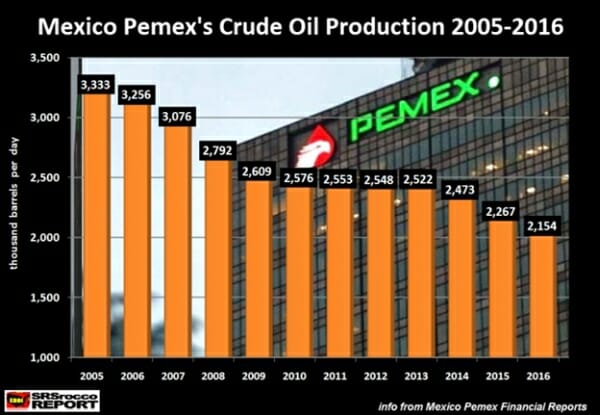 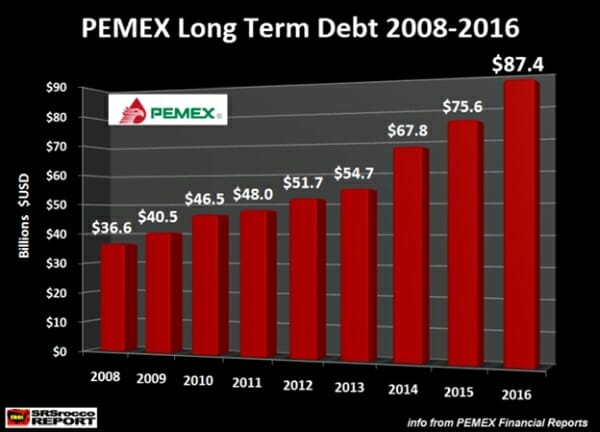 It was a shocking announcement.

Now that the pupils have had time to adjust, it’s clear that this seismic shift in Mexico’s oil industry is creating an opportunity to generate wealth.

But what about wind and solar power?

Isn’t that a thing?

So gas is over?

You may have noticed recently the price of gas has been going up hard at the pump. That’s no fluke. Sure, Elon Musk just sent a Tesla to Mars, but it still costs $57k to build one of those cars Elon sells for $37k, and getting down the highway takes advance planning.

So gas is going to be around for a while.

Not bad for a little company with a market cap of $57 million.

But that modest oil flow is not the stock price catalyst.

Renaissance is developing a high quality, diversified shale and mature fields portfolio for development in Mexico.

Shale gas is natural gas found in fine-grained sedimentary rock. PEMEX lacked the technology to unlock the value of shale.  It requires modern techniques to stimulate the gas bearing zones.

This hydraulic stimulation (also called “fracking”) is the process of pumping a fluid down a well, causes the surrounding rock to crack, or fracture.

A sandy-fluid then flows into the cracks. When the pumping pressure is relieved, the water disperses leaving a thin layer of the sand to wedge open the cracks. This layer creates pathways for the natural gas to escape from tight formations and flow to the well, so that it can be recovered.

The technology is carefully used and managed to minimize any environmental impact, particularly on groundwater.

In January 2017, monster oil producer LUKOIL, chose Renaissance as their partner to explore and develop the Amatitlán block in Mexico.

Current Amatitlán oil production is enough to lubricate a child’s bicycle chain once a month.

So why get excited? 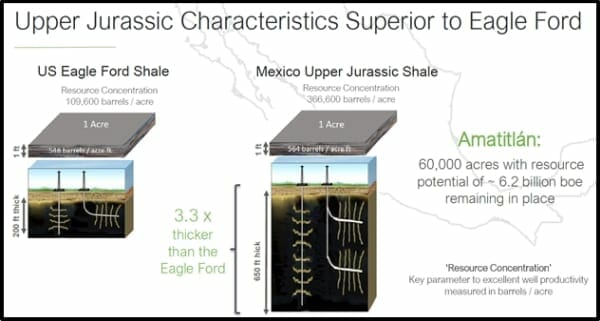 Of course, salt is a popular condiment – there’s a lot of it in the ocean – but you can’t extract it economically.

So is Renaissance Oil just a slick PowerPoint Presentation with some hopeful tubes poking down into the center of the earth?

We don’t think so.

Here’s one reason why:

“The management team is a who’s who of resource guys with big wins behind them,” stated Parry, “the lead director is Ian Telfer, Mining Hall-of-Famer and Founder, Chairman of the Board, and past President of Goldcorp (you may have heard of them, Goldcorp went from pennies to $11 billion in value under his guidance gold mining in Mexico).”

ROE also controls three blocks in the State of Chiapas

This field’s average production for Q2 2017 was approximately 190 bbls/day of light oil and 3.87 MMcf/d of natural gas with an average reservoir depth of 3,580 meters.

This field’s average production for Q2 2017 was approximately 205 bbls/day of light oil and 0.8 MMcf/d, with an average reservoir depth of 3,300 meters.

This previously-PEMEX field’s average production for Q2 2017 was approximately 237 bbls/day of light oil and 0.9 MMcf/d, with an average reservoir depth of 2,680 meters. The Malva field is delineated with 3D seismic data.

For these blocks, Renaissance sees significant opportunity for additional value creation in new well locations as well as application of innovative re-completion technologies.

When a monopoly like PEMEX physically disintegrates, there is a frantic Darwinian scramble to occupy its niche.

Just ask Roman Abramovich, who pounced when Russia’s oil industry privatized.  He now owns the Chelsea Football Club and has a personal fortune of about $8 billion.

Renaissance Oil is one way for a retail investor to benefit from the end of a monopoly.