Still breathing – and not in a coma?

Here’s the story in a nut shell:

Cobalt is the holy grail of resource stories

One effective bullshit-detector for a supply-demand story is to monitor the spot market (sometimes referred to as the “physical market” or the “cash market”). 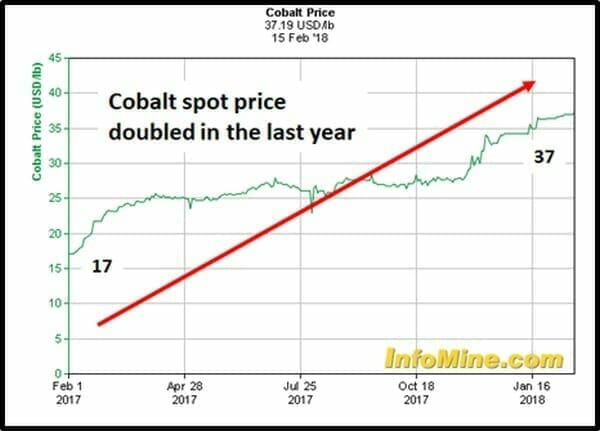 The above chart tells us that industrial end-users are buying cobalt in volume (possibly intending to hoard it) – against limited inventories – that’s running the price up.

So how do we make money on cobalt?

First Cobalt (FCC.V) controls over 10,000 hectares of prospective land and fifty historic mines located in the Ontario Cobalt Camp. Investors who bought in when we did, made a lot of money.

It’s trading at $1.08 with a market cap of $210 million and the FCC stock price has doubled since we first wrote about them.

In our opinion – there’s a lot more room to run.

So let’s have a look at 5 cobalt companies priced below .50 per share.

Is the cobalt supply/demand imbalance story a load of bollocks?

The same story was told about oil in 2008 – now it’s cheaper than craft beer.

This fall, Volkswagen (VLKAY:OTCPK) tried to secure a $59 billion cobalt contract for 150 gigawatt-hours of lithium-ion battery storage – about 30,000 tonnes per year (30% of total 2017 global supply).

Barring a technological revolution on the supply side (like fracking) we expect the cobalt spot price to keep rising – creating a tail-wind for well-run cobalt juniors outside of the DRC.