Does Apple (AAPL.NASDAQ) have a conscience?

There is a popular argument that corporations display psychopathic characteristics: endemic deceitfulness, failure to obey laws, incapacity to experience guilt and an absence of a social conscience.

Apple (AAPL.NASDAQ) – the $800 billion gadget maker – has been frequently accused of behaving without a conscience.

After 14 depressed teenagers hurled themselves off rooftops at Foxconn, the iPhone factory in China, Apple CEO Steve Jobs jauntily declared, “Foxconn is not a sweatshop. They’ve got restaurants and swimming pools.  It’s a pretty nice factory.”

Despite his reputation as a micro-manager, Steve Jobs never visited Foxconn.

The new CEO of Apple, Tim Cook, is a different kettle of fish.  He’s talking less like a hippy than Jobs – but acts more like one.

Cook has inherited a big ethical problem. There is an ocean of money to be made if you can anticipate his solution.

Apple has sold over 1 billion devices worldwide. Each Apple device has a battery packed with cobalt.  Currently 65% of global cobalt supply comes from the Democratic Republic of Congo (DRC).

Stating that the DRC has lax labor standards is like saying Thailand is sunny.  It’s famously sunny.  It’s been sunny as long as anyone can remember. Sky News in the UK has reported on labor conditions in the DRC. 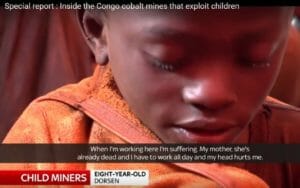 The Washington Post recently did an expose of ethical problems in Apple’s cobalt supply chain, revealing evidence of widespread child labor in artisanal and formal mines.

Whatever way you look at it, the situation in the DRC isn’t pretty, although easy solutions may be elusive. What’s worse: an over-worked child or a hungry child? That is a profoundly uncomfortable question – but it’s a real one.

One thing is for sure: Tim Cook would like to have other options.  The 12-month price movement of cobalt (up 90%) foreshadows a shift away from the DRC. 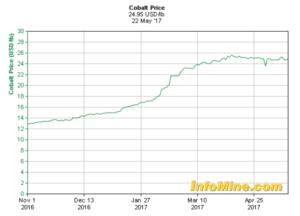 Tesla’s Gigafactory in Nevada will eat 7,000 tonnes of cobalt a year at full production in 2018. An additional 15 battery mega-factories are expected to come online to meet future demand for Electric Vehicles and mobile device batteries.

Here are five ways to play the impending squeeze on the cobalt supply chain:

Fortune Minerals is focused on advancing the vertically integrated NICO cobalt-gold-bismuth-copper project in the Northwest Territories.  Its objective is to produce a bulk concentrate for shipment to a Saskatchewan refinery

All of Fortune Mineral’s assets are located in North America.

NICO has already been assessed in a positive Feasibility Study in 2014 but requires an update to reflect current costs, commodity prices and currency exchanges rates.

CobalTech controls 343 hectares in the Cobalt region of Northeastern Ontario, Canada. Its land package includes 11 former producers or advanced exploration projects with a historically recorded output of 253,000 pounds of cobalt mined from shallow depths not exceeding 186m from surface.

Field crews are collecting geological information, orientation surveys and outcrop stripping and sampling, prior.  A diamond drilling program should follow once all the information has been integrated into a 3D model and targets have been identified.

LiCo Energy controls the Teledyne property, located in the district of Temiskaming, Ontario.  The project covers 115.5 hectares of mining and surface rights, with an additional 439.1 hectares of staked crown claims.

Over $25 million (inflation adjusted) past work has been already been completed on the Teledyne Property.  An historical estimate of 14 million kilograms of cobalt has been produced.

In the late 1970s and 1980 multiple holes were drilled on the property with average results from the 22 holes equalling 0.57% Cobalt/ 1.6 meters core width.

Cobalt Power Group is consolidating a significant land package near the prolific mining region by Cobalt, Ontario – famous for its silver-cobalt veins.

Historically, the cobalt was neglected because of low demand.  Silver was the primary target.  The priorities are now being flipped.  CPO’s objective is to resuscitate the historical mines and begin cobalt production.  The mined silver will become a by-product credit.

The next phase of exploration includes drill target identification and surface drilling.

First Cobalt has an option to acquire 100% interest in Keeley-Frontier Mine in Ontario.

Historically the mine has produced 3.3 million pounds of cobalt and 19 million ounces of silver from 300,000 tonnes of ore.

First Cobalt also has a DRC cobalt project.  I wouldn’t write that off.  Once an economic deposit has been established, the challenge is to create a clean production chain that eliminates child labor. That’s doable but given the media spotlight on the Congo – the North American asset may have a stronger tailwind.

Section 1502 of the Dodd-Frank Protection Act requires U.S. companies to track and report the source of their minerals. Apple has recently pledged to treat Congolese cobalt as a conflict mineral.

We do not pray in the church of Steve Jobs.  He’s not a God, he made gadgets. We have seen no evidence that he had a conscience.

But Tim Cook is the first openly gay CEO on the Fortune 500 list.  He “came out” to help young gay people gain confidence. He later stated that he will give his entire fortune to charity.  Mr. Cook’s conscience may trigger a disruption in Apple’s cobalt supply chain.  Understanding this is a powerful wealth generation opportunity.

Keep your eyes on cobalt. 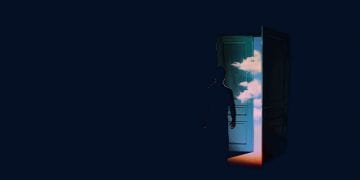