In every area play, there are big players, small players, and ‘me too’s. You can see this in action over in the Patterson Lake uranium plays, where the map is a checkerboard of gerrymander-like shapes and chunks, with some big big swathes and others tiny strips that likely contain no more eight trees and a raccoon wondering what the hell is going on.

The holy grail for the ‘me toos’ is that someone next door with an actual drill program finds something in the ground and decides to pick up every around them to lock down the area.

But sometimes the little guy does some digging of his own. Sometimes he gets his hands on permits that everyone else needs. Sometimes he inherits a pile of dirt that contains something that’s running hot.

American Potash (AMP.C) found lithium, and has the only permits in the area to drill it. This makes American Potash a pretty girl who everyone wants to dance with.

My eyes met AMP’s across a crowded dancefloor at Sprott. She wasn’t like all the others. She had something they all wanted.

But she was surrounded by Germans.

That’s usually a bad sign. Germans can spot a pretty girl, but by the time they’re done with her, she’s doing the walk of shame four months later and wondering if her reputation will ever recover.

Thankfully, AMP wasn’t being courted by these Germans. They were saying things like, “Unfortunately, the stock has already risen steeply over the last few days,” instead of the usual, “do you like schisse films,” followed by an Uber back to the hotel.

Let me quietly back out of this metaphor – what I’m saying here is, the Germans started talking about American Potash this week, and quickly facepalmed it, because the stock has gone up from $0.065, roared through a $0.10 financing, and now sits at $0.23. In their mind, that’s a bad sign.

Let me clear on this; the Germans know how to promote a stock, but they want that early juice. American Potash, in the last couple of weeks, has run away from them. Which makes it perfect for us.

Potash. The joint is lousy with potash. AMP’s Paradox Basin project in Colorado is a place where the seas broke, then subsided, then rose, then subsided, for eons. That’s why the nearby Utah Great Salt Lake has enough salt to be considered Great and not merely So-So.

But there’s salts and there’s salts. Some salts go on your burger. Some are used to grow the feed that went into the burger back when it mooed. And some will one day power lithium ion batteries.

This, as you may have figured, is important.

If all you cared about at the American Lithium – sorry, Potash – project was the potential for fertilizer, you’re sitting pretty. Currently valued at ridicu-low $3.1 million market cap, if you gave me a shovel and a flatbed truck, I could likely sling enough potash out of the ground in a year to earn that much back. I’m not going to suggest we test that claim, but let’s assume I wouldn’t die in the second hour of shoveling and just go with it.

I know there’s potash because there’s an NI 43-101 Exploration Target on the area, that says you’re looking at around 600m-1000m tonnes of potash out there underlying the project location.

Still, if you like the geo-talk, “The Agapito Report classifies Cycle 5 as a NI 43-101 Exploration Target projected to contain between 600 million and 1 billion tonnes of sylvinite with an average grade ranging between 19 and 29% eKCl, assuming a bed thickness cut-off of 2.0 m and a composite grade cut-off of 15.8% eKCl.  Cycle 5 ranges between 1, 200 and 1, 900 m depth on the Property.”

In addition, the joint is flush with old oil wells, many of which are drilled right on through high-grade, thick, and continuous potash. Just down the road, at the Moab-based Intrepid Potash (IPI:NYSE) plant, they’ve been scooping out potash for 40 years now, and say there’s another 120+ left in the life of the mine. That matters, because seismic surveys indicate the region is non-faulted and continuous.

You can see the Intrepid play at bottom right of this map: 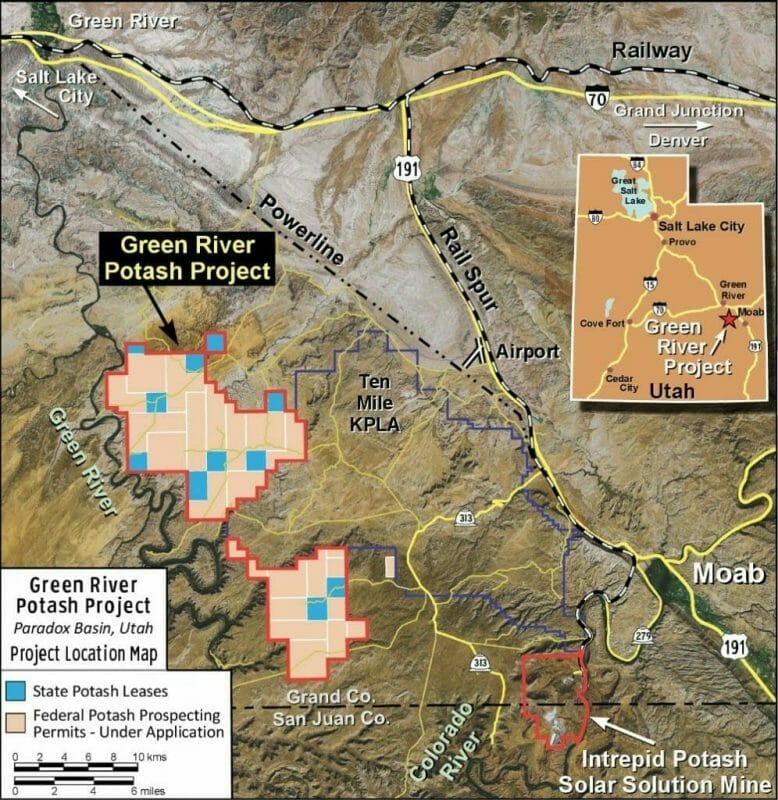 So the potash play is fair.

So fair, that it’s pretty much all the company investor deck talks about.

But hey, potash isn’t the flavour of the month yet, even if everything we eat needs it, even if you can make a lot of money out of a billion tonnes of it. So American Potash lingered as a below-$0.10 stock for a while.

That is, until the lithium gang started poking about.

We know there’s lithium in the Paradox Basin, because bigger players are crawling all over the area, with big fat market caps and drill cash just spilling out of their trapper keepers.

Nearby explorer Power Metals (PWM.V) has a market cap seven times higher than AMP’s, so when it joint ventured with the company to explore American’s 13k acres for lithium, the share price jumped notably.

And when an even bigger neighbour came calling, in the $60 million MGX Minerals (XMG.V), which agreed to buy all of Power Metals’ brine assets, and most of its hard rock assets, that didn’t hurt the stock either.

So why do all these bigger players want to have a fiddle under American Potash’s skirt?

Because she’s got permits, baby.

Hold on tight for some inside baseball nerd talk:

In 2016 AMP began acquisition of 308 Federal lithium claims (6160 acres) within the bounds of their Potash exploration permit application area of interest (AOI) and, in conjunction with the approximately 7,040 acres of Utah State lithium leases, now possess approximately 13,200 acres of lithium claims and leases in Utah. In late 2016 and into 2017 AMP began acquiring lithium mining claims in the Colorado portion of the Paradox Basin, focused on two areas with historic and current oil and gas exploration and production. American Potash’s Colorado lithium claim position now totals approximately 12,160 acres.

Here goes: AMP got permits to drill for salts when they were looking at potash, but those permits allow for them to recover lithium data too, right down the same hole.

Their competitors don’t have drill permits. Only the $3.1 million American Lithium does. This makes it important to acquire, merge, JV, sidle up to, make love to, and vow eternal fealty to AMP, if you’re a bigger player with lithium ambitions in the area and don’t want to wait for bureaucrats to do paperwork sometime next year.

Well, I can’t see any public company this small staying this small with this much goodness going on. The Germans may feel shunned that they didn’t get some of that cheap paper back when everyone thought AMP was just agri-salt, but that valuation right now is nothing if not exceptionally under-bought.

The lithium deal will spin out eventually, or be bough out, because until potithium or litash becomes a thing, the potash markets and lithium markets are just too divergent.

But that’s a deal for you, because (assuming there’s a spin out), you get shares in two companies for the price of one.

Or you get a fat cheque for royalties. Or the whole darn company gets bought out at a premium which, right now, would be a rounding error for MGX.

I know how you non-mining guys think. You read stuff like this and think, “Bah, they’ll never produce any potash, and who cares if they do?”

They may not. But that’s of no matter.

What is VERY important on the mattering front is, the more these bigger players lock in on AMP, the more cash comes to AMP whether they ever lift another finger to pull potash out of the ground.

MGX is no fluffy market play. That outfit has come from zero to hero in quick time, and has staked fortunes in 23 projects, covering everything from magnesium to silicon to lithium and even into wastewater. They’re a company that doesn’t fart around on the edges, they move projects forward and they’re not afraid to pile in on a sector that needs explanation.

But one thing makes MGX’s engine whir like nothing else, and it’s lithium. They don’t want to buy it. They want to produce it. And they have the technology to do so.

Bottom line: This is a perfect play for a smart gambler, in my opinion. It’s a moneyball deal. The market doesn’t rate it because, potash, but the lithium is dragging it kicking and screaming into focus. This is market inefficiency at play, and it won’t stay that way.

American Potash should go on your watchlist. Don’t be like the Germans.

FULL DISCLOSURE: Nope. Not a client. Just so freaking cheap, and I don’t believe it’ll stay that way.