On June 29, 2017 Manganese X (MN.V) revealed that its 1,600 meter spring drill program has been completed at its Houlton Woodstock project in New Brunswick.

In 2016, Electric Vehicle and solar panel sales both grew by about 60% worldwide.  Currently, one of the biggest improvements in battery technology is the use of manganese in cathode materials.

For a junior metal explorer – drill results are critical.

As one promoter explained it to us: “Mineral exploration is a treasure hunt – drill results reveal if you are getting “warmer” or “colder” in your search for the treasure”.

Usually the market reacts to drill results like a tipsy 13-year-old girl – raising its palms to the heavens in a frenzy of delight – or shattering its cocktail glass on the ground and stomping off in a cloud of doom.

But in fact, a disappointing drill result for a metal company isn’t as devastating as it can be for – say – an oil & gas company. If you spend $50 million punching a hole into the center of the earth and you get a “duster” (dry well) – reading the negative Appraisal Well Report is gonna make you look like this guy:

Even for energy CEO’s with a solid “Poker-Face” it’s hard to ask a merchant banker: “Can we please borrow another $50 million and give it a shot somewhere else?”

Metal explorers can just move the drill rigs or change the angle of attack.

There is always hope.

As MN shareholders wait for the spring drill results they have reason to be optimistic.

Drilling was completed over a 1.8 km strike length of the prospective manganese occurrence trend.

Further Conclusions from the Drill Program:

In the latest 9-hole drill program, new anomalies were targeted on the Sharpe and Moody Hill areas of the deposit.

According to MN’s June 29 press release: “The kinetics of the leaching process appear very  favourable to high levels of manganese extraction of up to 96% with a short contact time, while the solubility of iron and other alkali metals remains low which could simplify downstream processing requirements.”

MN is now preparing an RFP (request for proposal) for a marketing and economic cost assessment to establish the most profitable commercial end use for the mined product.

It’s good that MN has a few balls in the air but we shouldn’t get distracted by the “diagnostic leaching”.   It’s like designing a cake recipe while you’re waiting for a delivery of flour.

When the flour arrives, it’ll be good to start baking immediately.

But the flour still has to arrive.

General Motors (GM.NYSE) is already installing manganese batteries in the Chevy Volt. “The market” says the demand drivers are accelerating. 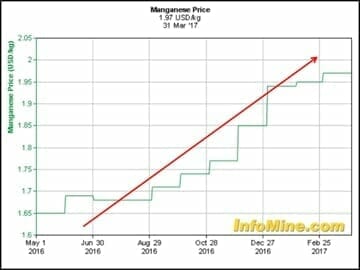 By the end of July, we should have the MN spring drill results which will tell us if we are getting warmer or colder in the search for one of the world’s hottest commodities.

FULL DISCLOSURE:  Manganese X is an Equity Guru Marketing client.  We like the property, the project, the people – and we believe that manganese will be a lead actor in the lithium-ion battery revolution.