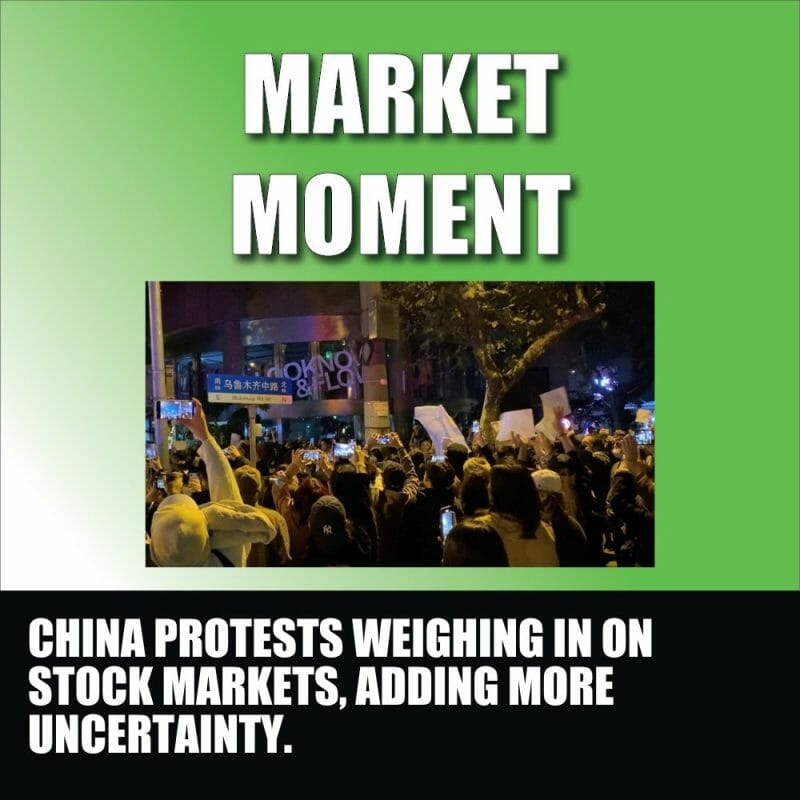 The uncertainty in the world continues, and this time, we look to Asia. Readers of my work know that things have been crazy in that part of the world. We have seen Asian currencies get hammered against the US Dollar. The Japanese Yen is what comes to mind, but the Korean Won, the Indian Rupee and even the Chinese Yuan have seen big moves.

North Korea has once again been making nuclear moves, and there is fear that China may do something about Taiwan as Xi Jinping has been given an unprecedented third term as the man in charge of China.

However, China has economic problems. Earlier this year, we heard about mortgage and real estate issues. Now, the country seems on the verge of imploding.

It all started last week with news that a huge protest occurred at the giant iPhone factory in Zhengzhou. This was due to pay complaints and Covid-19 containment measures. A disruption which will likely see Apple lose 6 million iPhone Pros and result in a production shortfall.

We then heard news that China Covid cases hit a record high resulting in lockdowns in major cities including Beijing. China’s zero Covid policy has definitely impacted the Chinese economy and the world when you consider all the “made in China” goods we buy. 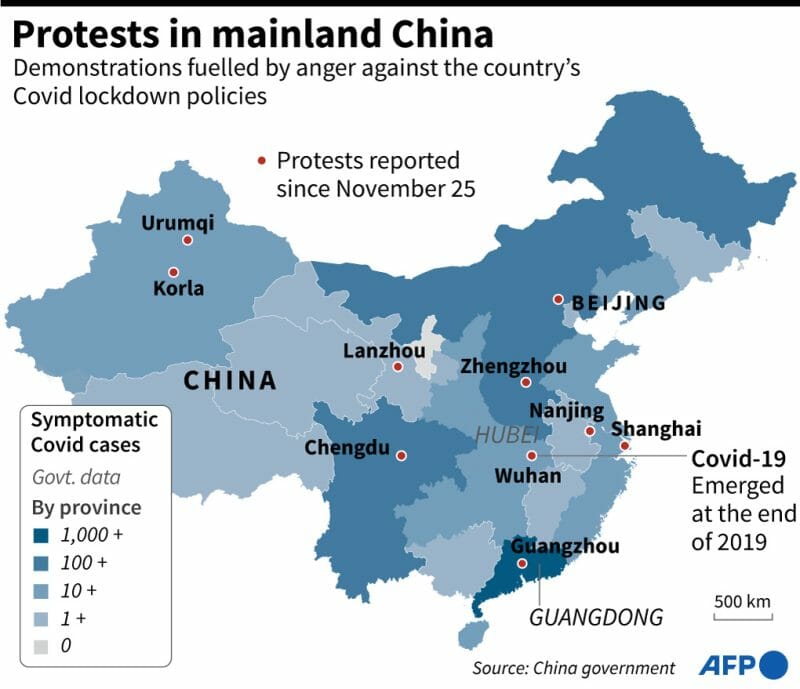 Before we talk about that, I should address that these protests have seen unprecedented unrest and people are on the streets calling for Xi to resign. The Chinese Communist Party will either acquiesce, or more likely, clamp down on protests and become even more authoritarian.

When it comes to supply chains, these new lockdowns will continue to have a major impact. For those following the inflation peaking game, there is a very real chance that inflation will continue higher due to more supply chain problems. Instead of central banks blaming Russia, you will hear and read about China being the cause of rising inflation in the not so distant future.

China has always been about growth, and this growth impacts many commodity markets including copper and oil. 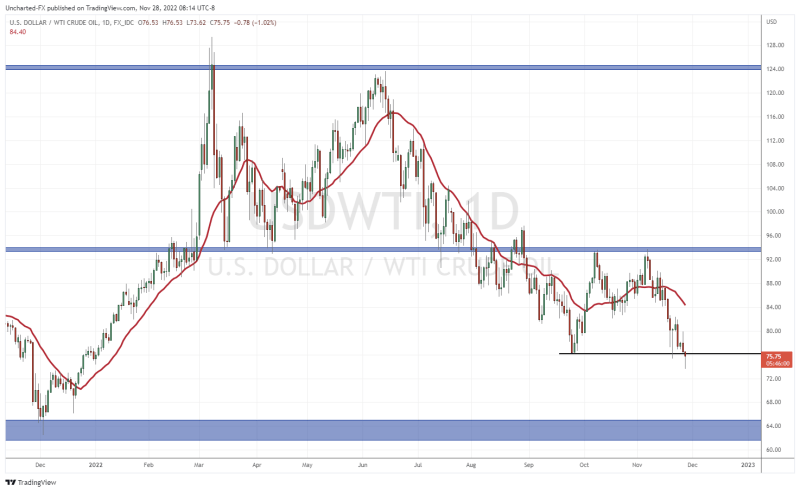 Both of these markets are feeling the pain, and oil could be on the verge of breaking down below a major support zone and September lows. This will be great for energy inflation but once again, this inflation could be offset with new inflation from the current situation in China.

US markets are also seeing some pressure as investors evaluate the protests in China. This, added with the fact the Fed is up in two weeks time, means that the stock markets will see some volatility during the ‘Santa Claus rally” time. 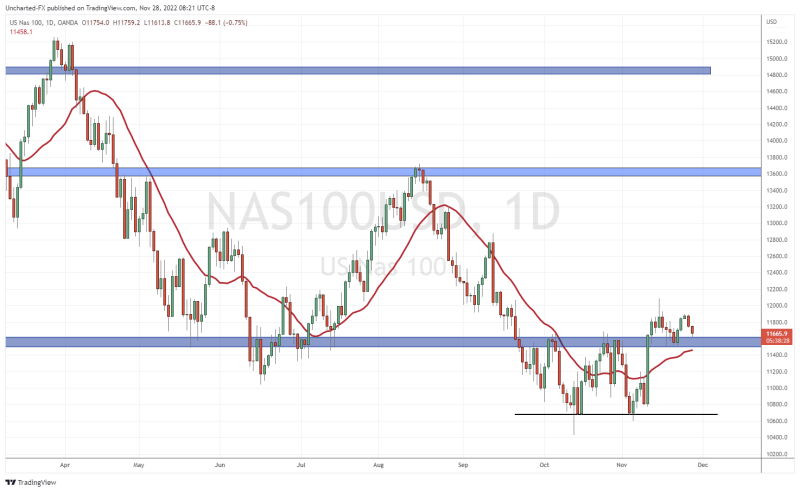 All US markets are down, but the one chart which stands out continues to be the Nasdaq. The tech index confirmed a double bottom reversal pattern when it broke out back on November 11th 2022. However, there was no momentum and continues to be none after 11 trading days post breakout. Even though the breakout zone still holds as support and remains intact, seeing no momentum follow through is worrying for bulls. There is real potential for this breakout to be a false breakout if we get a close back below the breakout zone I have highlighted in blue above.

Looking elsewhere, we see that the VIX has popped higher, but I am more interested in the price action of bonds and the US dollar. If markets are afraid then we should be seeing a move into risk off assets. 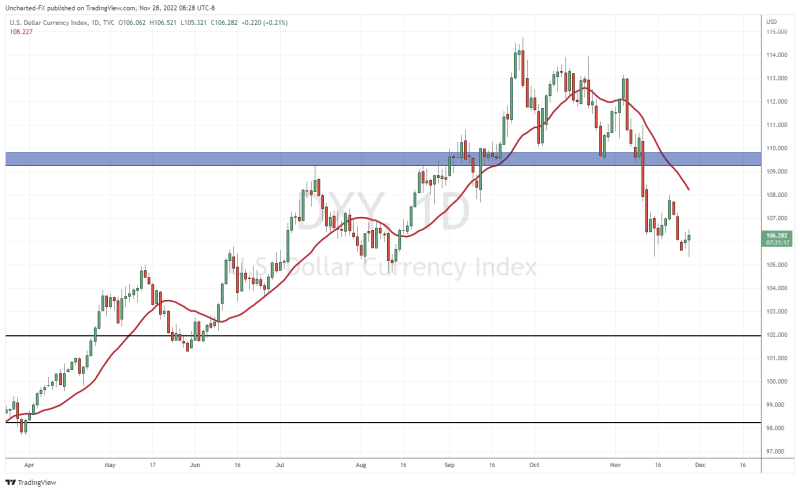 The US dollar is green and could be seen as a move to the safe haven currency as a risk off move. The dollar would need to close above 110 to nullify this current downtrend, but fear could certainly do it… and let’s not forget about the Fed meeting in a few weeks time. 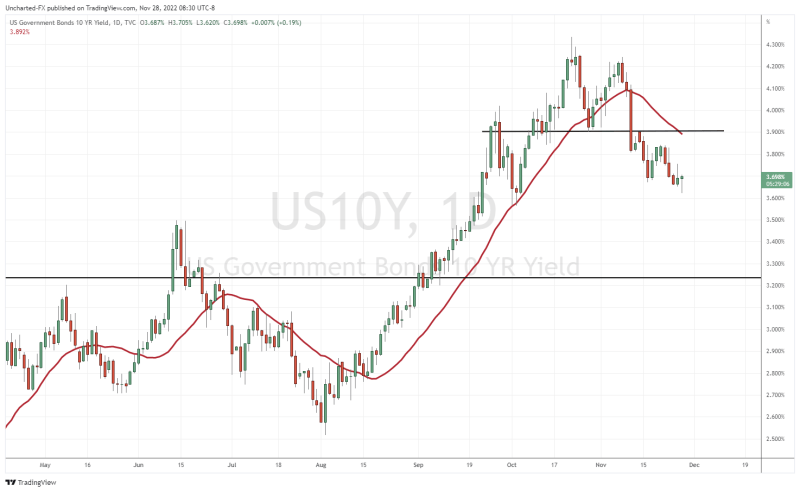 The 10 year yield is green which means that bonds are being sold off. Not really what you would expect from a risk off move, but rather from investors pricing in a hawkish Fed. The 10 year yield is a key chart to predict market movements and it continues to provide. When yields move higher, stock markets fall under pressure. When yields drop or remain stable, then stock markets move upwards.

In summary, the situation in China adds more uncertainty and could lead to higher inflation numbers. I want to add that many analysts believe China will have to go through their 2007-2008 or their credit crunch. Maybe this is a sign of that occurring and could lead to a larger financial event.

US stock markets are coming under pressure and could see breakouts nullified, translating to no Santa Claus rally in December.