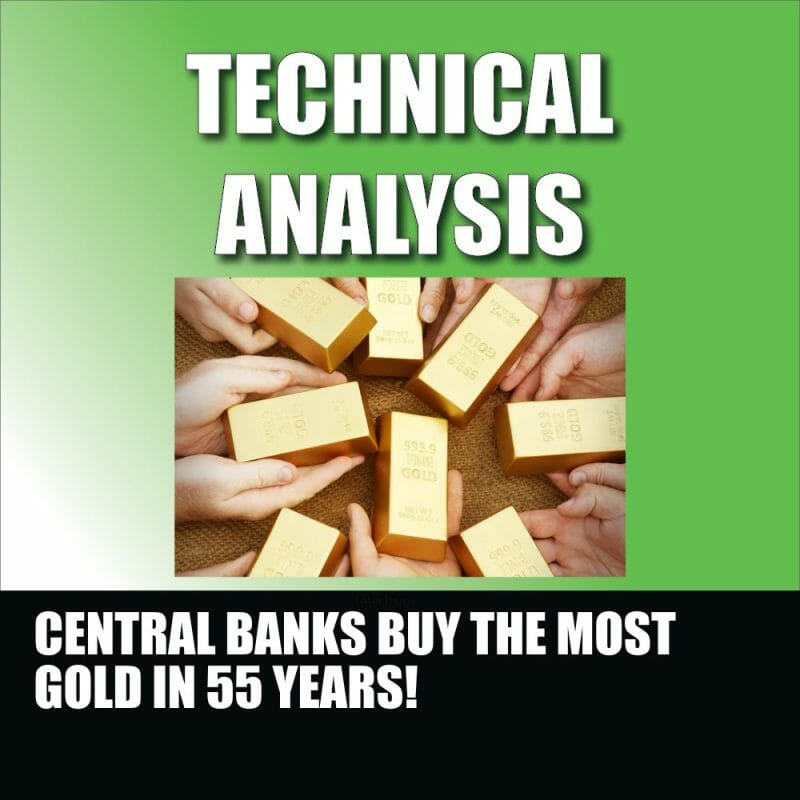 Central banks buy the most gold in 55 years!

Gold matters. Tons of people say that it is not an inflation hedge or it is useless. A pet rock. We dig it up for a lot of money and then store it away. The truth is gold is the best money because it has the best stock to flow ratio. Because gold is rare and costly to mine, world production, or flow, of gold remains around 2% even if gold prices are up big for the year. This means gold’s stock increases slightly per year.

A basic historic economics and money lesson, but this is why gold is the best money.

Whether you like it or not, gold has an important role even in today’s world. You will understand this if you stop considering gold as a commodity. Start looking at gold as money. As a currency. The world currency if you will.

This is why billionaires like Ray Dalio and Stanley Druckenmiller are increasing their allocation in gold. They see problems with fiat currency coming. Perhaps you can see this coming too. You know the fact that inflation is still high and whenever inflation has been above 5%, there has never been a time in economic history when inflation was brought down with interest rates being below the rate of inflation. Confidence crisis anyone? Central banks are stuck in my opinion, and interest rates need to go much higher but likely break something.

We have all heard of Russia, China and Turkey stacking up on gold. In fact the Russians show a good example of using the world currency to counter sanctions. Economic sanctions are meant to hit currencies. Russia has done well with Western sanctions going back to 2014 because as the Ruble declined against the Dollar, Gold against the Ruble rose which means Russia did not see a loss. Pretty based if you ask me. These guys are the ultimate chess players. Now one can make a case for the Ruble being linked backed by commodities as the Russians will now not accept US dollars for their oil, gas, wheat, uranium and pretty much every other resource in the world which Russia is a producer of.

Central banks are buying gold. Not Bitcoin. And it is worth paying attention. They know something is coming and are preparing.

Eastern central banks may be doing so to have an advantage like Russia. Many are likely doing so because they see continued US Dollar strength, which means domestic currencies will weaken. Remember: the true definition of inflation is a weak currency resulting in more of the weak currency having to be used to buy something with the result being higher prices or inflation. Gold is an inflation hedge to this.

For my friends holding Euros, British Pounds or Japanese Yen, compare the long term charts of EURUSD, GBPUSD and USDJPY with XAUEUR, XAUGBP and XAUJPY. If you held gold, your purchasing power would be protected. Even increased. This is gold’s role. I do not approach gold as an investment to make me money, but a way to preserve wealth in these upcoming uncertain times.

According to the World Gold Council (WGC) central banks bought a record 399 tonnes of gold worth around $20 billion in Q3 2022! This stat means that central banks have been accumulating gold reserves at the fastest pace seen in 55 years when the US dollar was still backed by gold. 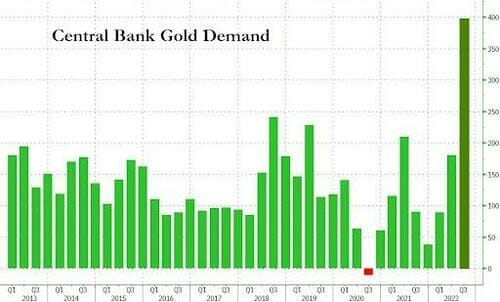 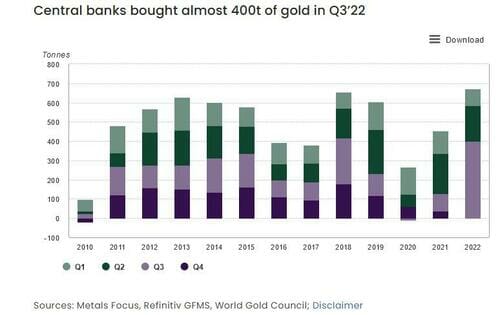 The demand for gold from the retail level is also back to pre-pandemic levels.

WGC says that the world’s gold demand amounted to 1,181 tonnes in the September quarter, good for 28% Y/Y growth.  WGC says among the largest buyers were the central banks of Turkey, Uzbekistan, Qatar and India, though other central banks also bought a substantial amount of gold but did not publicly report their purchases.

The Central Bank of Turkey remains the largest reported gold buyer this year, adding 31 tonnes in Q3 to bring its total gold reserves to 489 tonnes. Retail buyers of gold bars and coins also surged in Turkey to 46.8 tonnes in the quarter, up more than 300% year-on-year. That’s what happens when inflation comes in at 85.5% and the central bank is cutting interest rates.

The Central Bank of Uzbekistan bought another 26 tonnes;  the Qatar Central Bank bought 15 tonnes; the Reserve Bank of India added 17 tonnes during the quarter, pushing its gold reserves to 785 tonnes.

But there is a bit of a mystery as Zerohedge has reported.

With these Q3 numbers, just under a quarter went to publicly identified institutions, stoking speculation about who the mystery buyers were that waved in the other 300 tonnes of gold in Q3?

The potential suspects? China, who has not reported any change in its gold hoard since 2019, fueling speculation it may have been buying under the radar. Maybe Russia? And even Middle East nations such as Saudi Arabia, the UAE and Kuwait. These nations are making bank with higher oil prices and may feel it prudent to put this cash into gold.

A mystery and my speculation would be for a different article.

For those who trade gold, it has been a bit painful unless you have been shorting!

Gold prices have remained under pressure due to a strong US dollar and a rising 10 year yield. Gold does not perform well when yields are rising. A hawkish Fed has been bearish gold. But things could be changing after last week’s Fed meeting.

Powell did remain hawkish, but said that the pace of interest rate hikes could change. We could be soon getting smaller rate hikes rather than 75 basis point hikes. Powell did say the Fed may discuss this either in the upcoming December meeting or the January 2023 meeting. 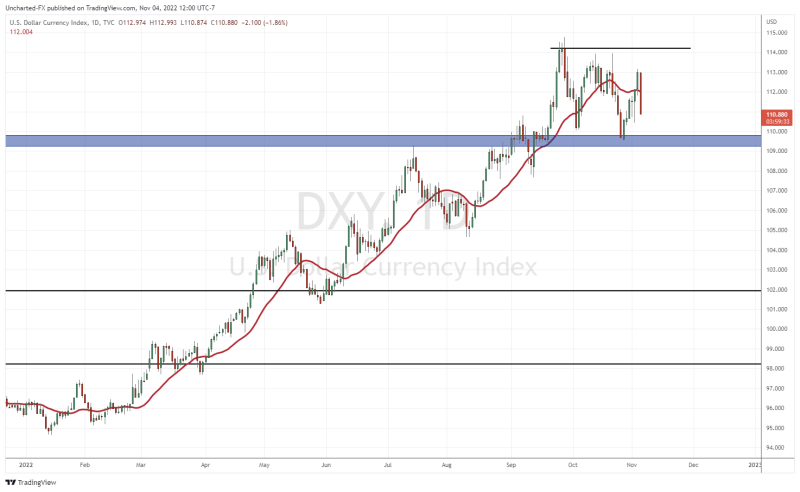 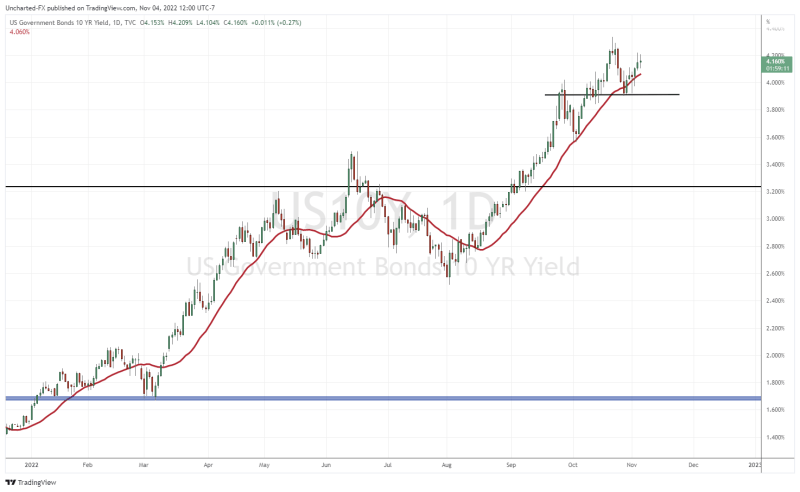 Gold bulls really need to be watching these two charts.

The first is the US Dollar (DXY). Yes the dollar is dropping at time of writing which is seeing gold perform well. But the dollar is still within its range. We really need a downside breakdown to call a dollar reversal and thus a gold reversal.

The second chart is the 10 year yield. Yields remain above 4% and could climb higher if the Fed continues with a hawkish tone in December’s meeting. In my opinion, we really need to see a strong close below 3.90% for a reversal in yields and thus a stronger probability of a reversal in gold. 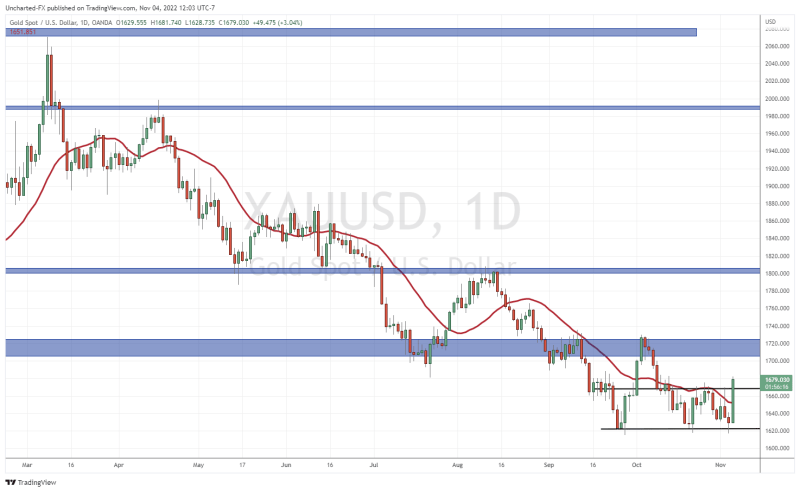 With current price action in the dollar and the 10 year yield, gold prices are rocketing. We have formed a beautiful triple bottom pattern with gold prices seeing buyers step in at $1620 support. The daily chart looks really strong especially if we can confirm a daily close above $1667, which looks likely at time of writing.

Sounds good right? Well, I have just one more problem. 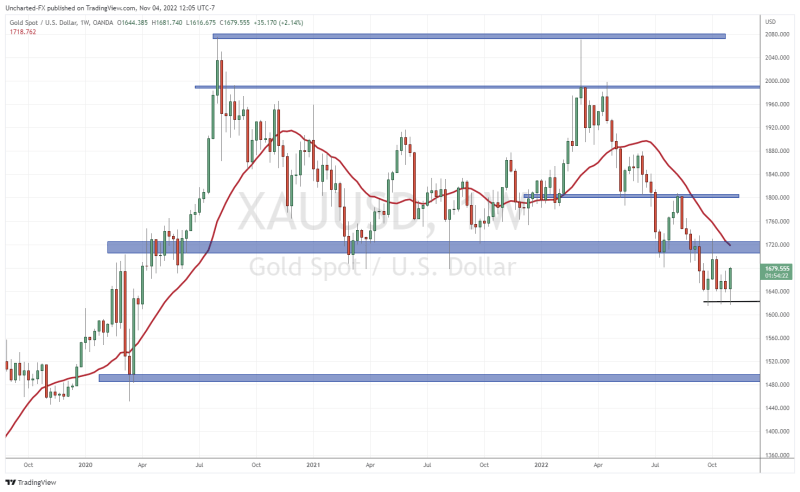 This means that this week’s weekly candle close will be very important. If gold can confirm a close above $1720 on the weekly then it would be safe to assume a new uptrend is beginning. That dollar drop and 10 year yield drop could be the telling signs for confirmation.

A positive is that ever since the early September weekly breakdown, gold has held on well. I expect to see momentum carry through when we get a breakout or breakdown on an asset. If I don’t see continuation soon after the break, it is a telling sign that a false move and a reversal is likely coming.

Be prepared gold bulls! We have a very important week and weeks ahead!