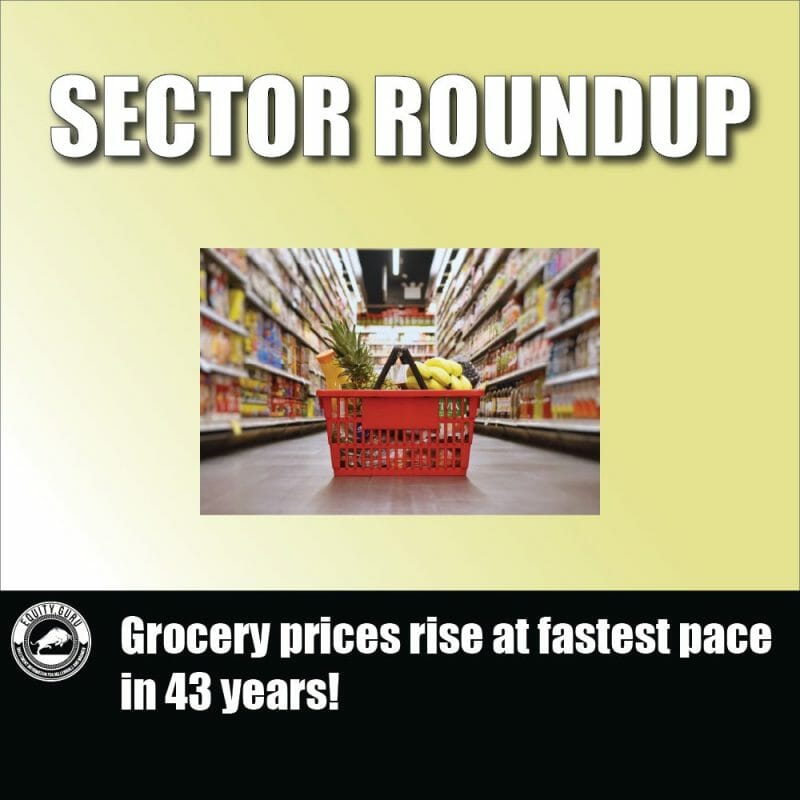 Investor’s are cheering the recent July CPI data. Inflation came in at 8.5%, lower than the 8.7% expected. However, that is not the full story.

Yes, gasoline prices are falling which contributed the most to lower than expected inflation, but other things are still up strong. Things such as shelter, electricity, and for our interests, food prices.

July saw a huge jump in the food index, putting the 12 month increase to 10.9%, the fastest pace since 1979! Food at home also continues to rise. In other words, consumers are getting a break at the pumps but their wallets are still crying at the grocery checkouts. 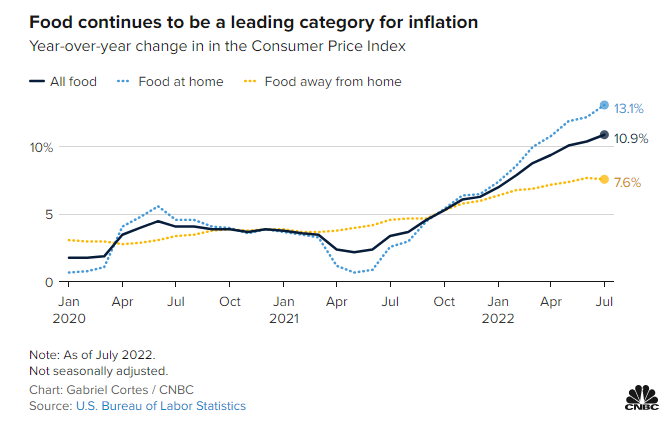 Cereals and baked goods cost 15% more than they did last year. Milk and dairy products are 14.9% higher, and fruits and vegetables are up 9.3% over the year. Peanut butter is up 3.5% for the month. Flour rose 3.2% and chicken got 1.4% more expensive.

The reason for higher food prices is due to multiple factors with supply chain disruptions just being one of them. Avian flu in the US has meant fewer eggs. A severe drought in Brazil has hit coffee crops. And of course the war in Ukraine has affected wheat. Simply put: supply has been disrupted but demand has grown.

Fuel, labor and packaging costs for producers has also been high. Oil prices are falling but it will take some time before those lower costs pass to the consumer.

Since consumers can’t just stop buying food when prices rise, we are seeing that many are opting for less expensive options. Tyson Foods has said that demand for steak is falling while interest in chicken is rising. Wendy’s and other fast food restaurants have been hit as many customers are deciding to pack their own lunches or eat breakfast at home.

Handling food inflation is tricky. Food was not addressed in the US inflation reduction bill. The US government does not have a stockpile of food as it does with oil. The government cannot release extra wheat, milk, cheese etc. The Federal Reserve raising interest rates cannot lower food prices as the Fed believes food and energy are influenced by global commodity prices and events. The US nor the Fed cannot control factors such as the war in Ukraine, droughts in Brazil and higher shipping costs. It cannot fully control domestic food prices, and we should expect higher food prices globally. 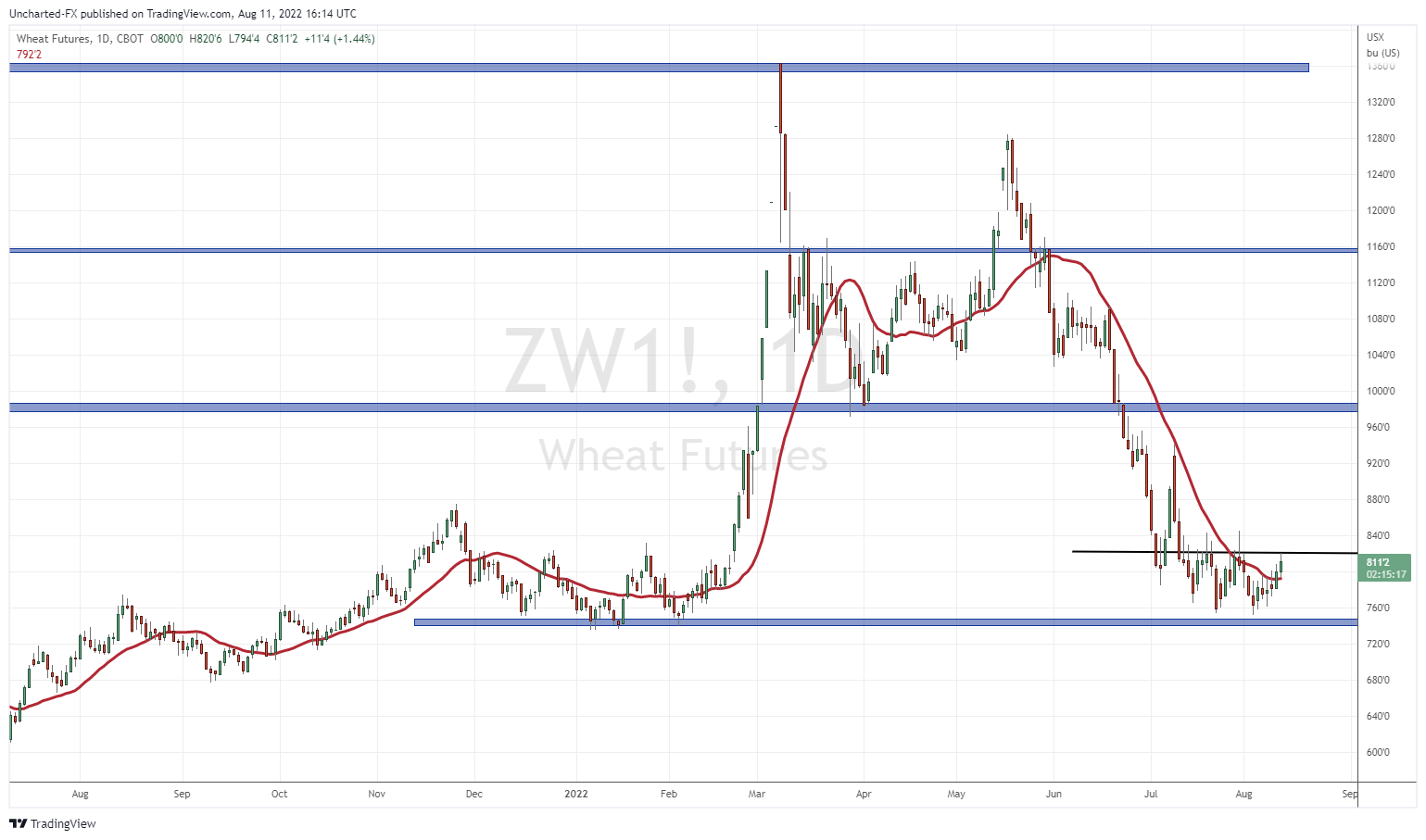 When it comes to the commodities, wheat remains unchanged from last week. This is still the set up I favor, and am just waiting for the trigger breakout. So much to like here on the technicals. 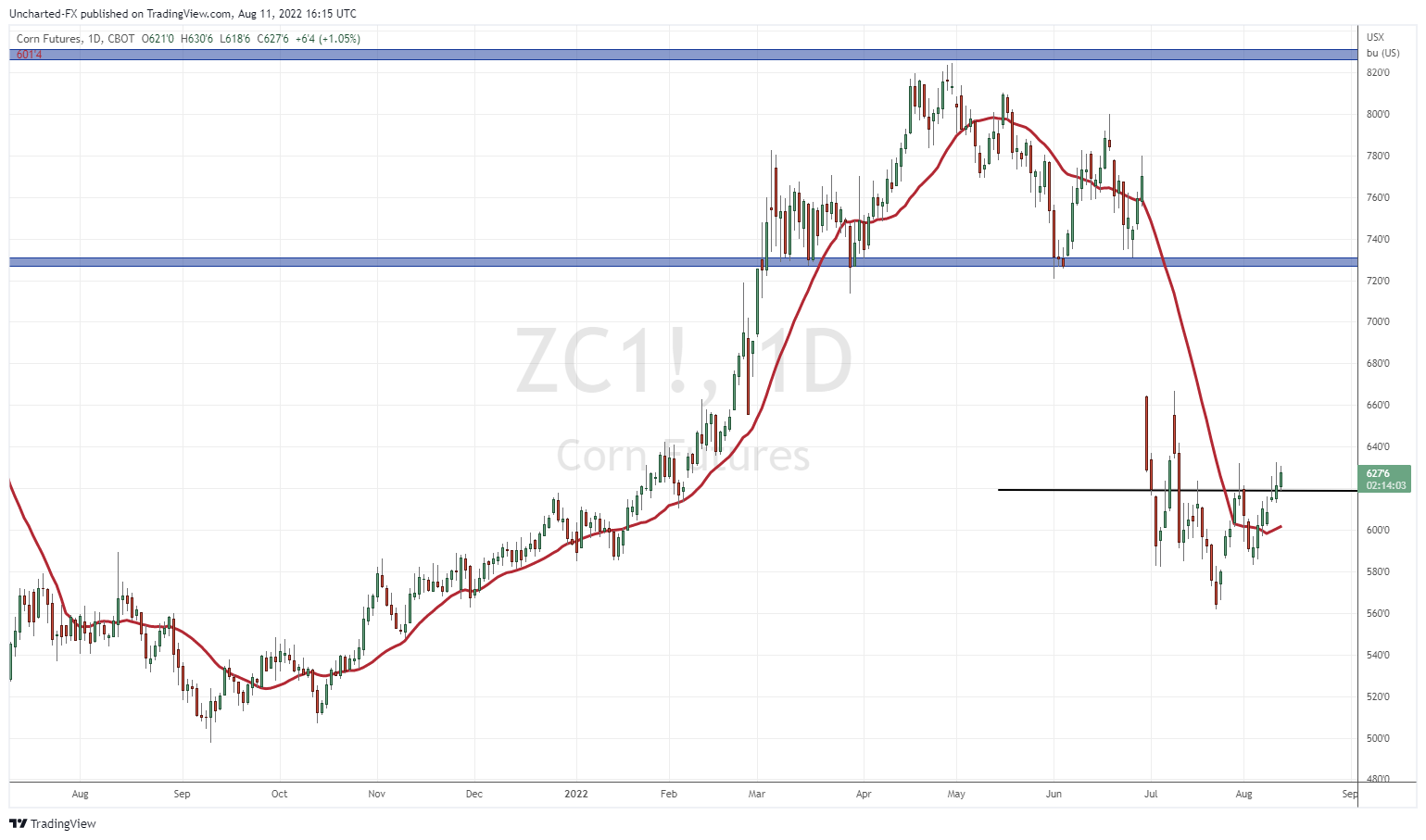 Structurally, we can say the same for corn, however I prefer the wheat set up much more. Corn still has a large gap to deal with, but we are printing a reversal pattern known as the inverse head and shoulders. 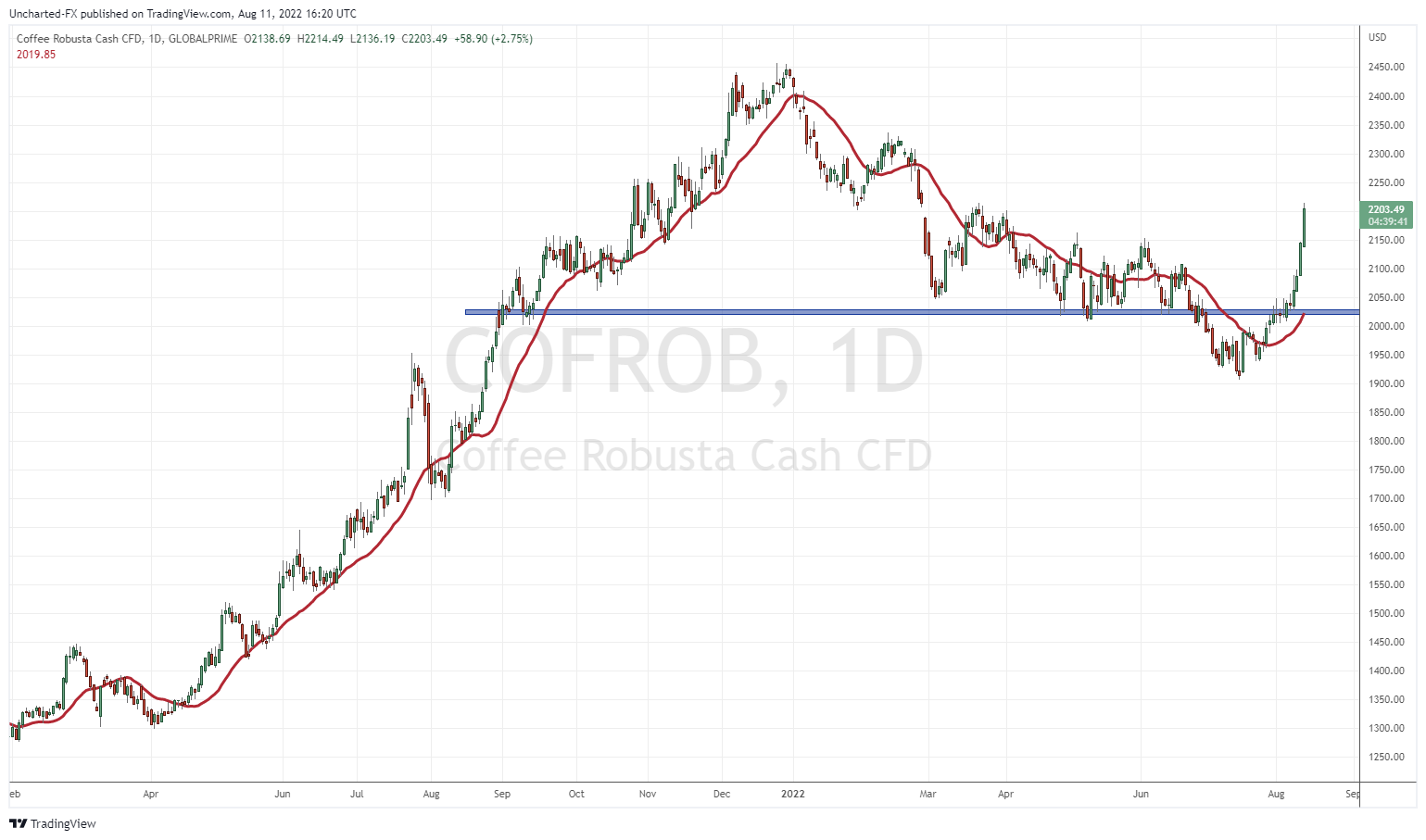 Coffee Robusta is taking off and coffee arabica is looking to do the same. This might be one of the top performing agricultural commodities in upcoming weeks.

In last week’s agricultural sector roundup, I highlighted many ag setups which were showing strong reversal signs. Those are still in play and I see great follow through on set ups such as Itafos, AG Growth, International Zeolite and a few more. Here are the top performing agriculture stocks of this week:

We had a breakout last week, and now follow through with earnings. AG Growth continued its strong performance in Q2 with record sales and adjusted EBITDA which increased 29% and 43% year over year. Strong results from sales in Canada, US, Asia Pacific, and South America. For more info, the earnings report can be seen here.

“Our strong results and momentum continued in the second quarter with another record result,” noted Tim Close, President & CEO of AGI. “Broad-based strength across our segments and geographies continues to achieve significant growth along with expanding margins. Solid demand across regions and platforms combined with our global strategy to have full systems capabilities in each region continue to deliver strong visibility for continued growth. Our record results year to date combined with this increased visibility going into the second half of the year provides confidence in raising our full-year guidance for Adjusted EBITDA to at least $215 million.” 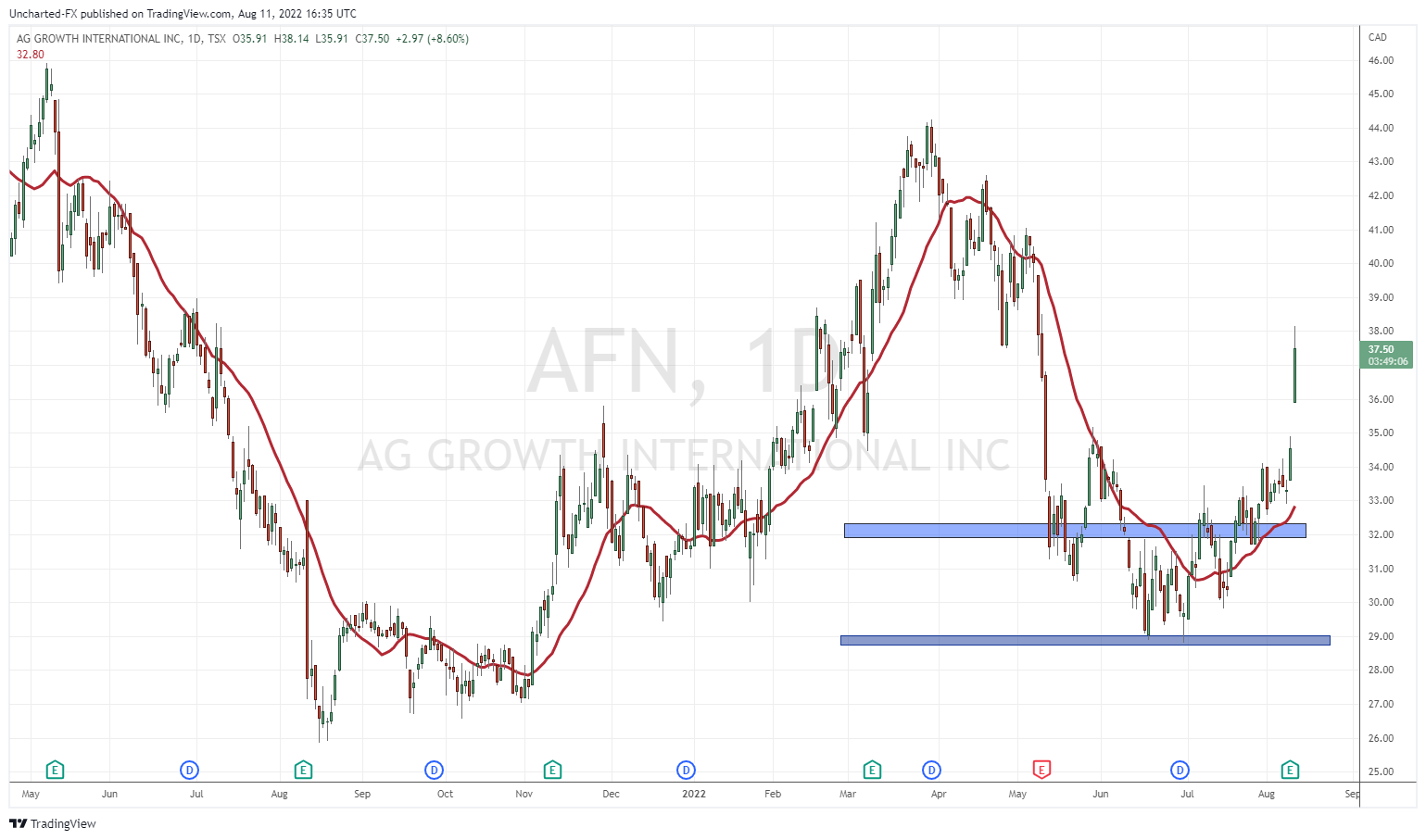 We called it. The breakout and retest at $32 confirmed a reversal pattern. As long as prices remain above $32, AG Growth can continue its uptrend. We seem to be seeing some resistance here at $38, but I would target $39-$40 as the first resistance zone. We could see price pullback from here before resumption of the uptrend.

Avivagen is a life sciences company that is focused on developing and commercializing products for livestock, companion animal and human applications that safely enhances feed intake and supports immune function.

The company announced this week a new order from one of its most important customers in Asia for four tonnes of OxC-Beta Livestock.  OxC-beta Livestock is a proprietary product shown to be an effective and economic alternative to the antibiotics commonly added to livestock feeds.

“It’s encouraging to see one of our largest customers in Asia continue to place sizeable orders – which we view as a sign that they remain on target for economic recovery at a time where uncertainty is playing out elsewhere and also confirms the value of our product in economically challenging times,” says Kym Anthony, Chief Executive Officer of Avivagen Inc. “We are excited for the year ahead as we continue to build on existing and new relationships both in Asia and markets worldwide.” 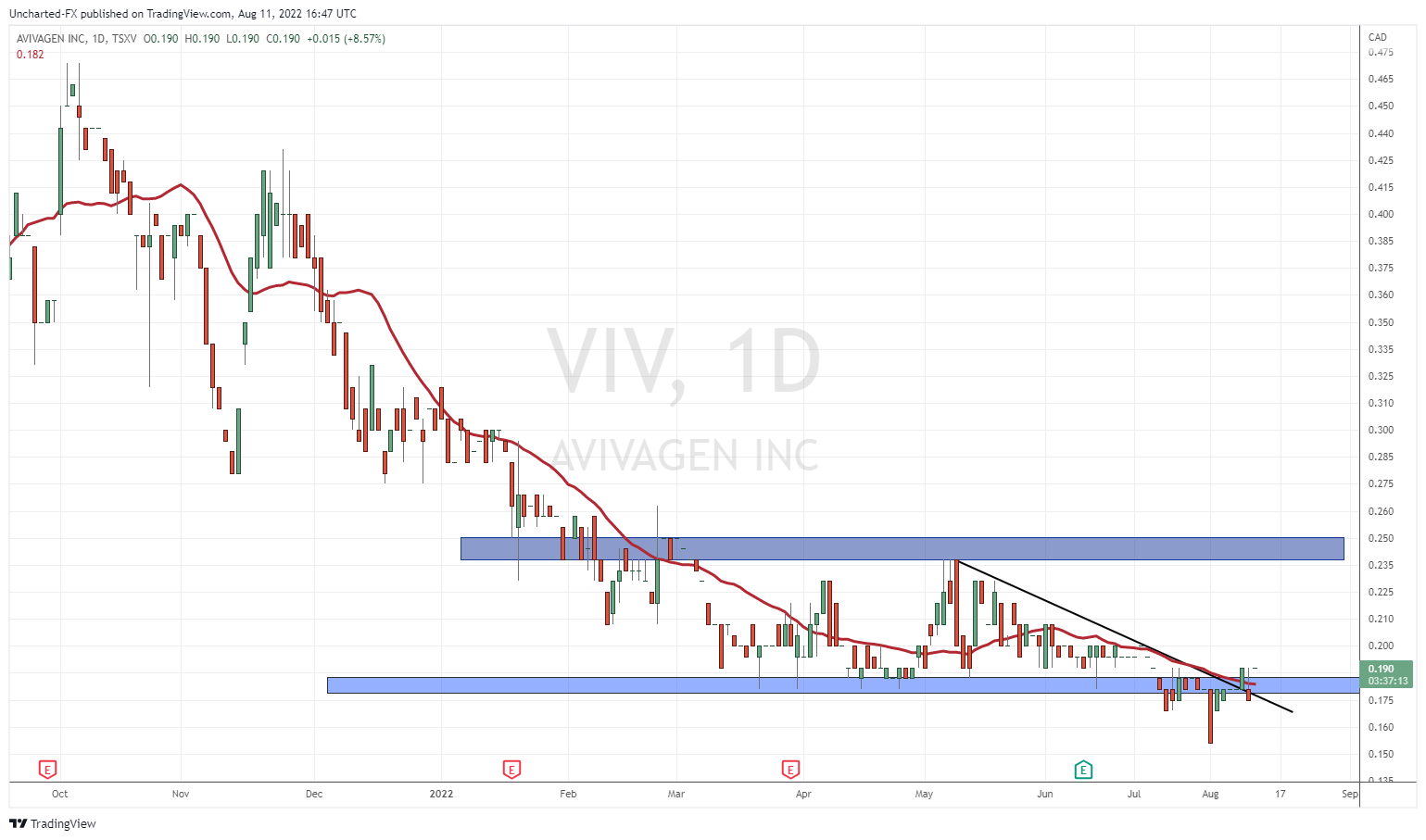 There isn’t much volume from the recent press release at time of writing. However, we are looking to reclaim a past support zone with a close above $0.185. Not only that, but a trendline is also breaking. Lots of positive confluences here, but the only thing lacking is the volume. We want to see large volumes in order to sustain momentum. Watch for this in upcoming days. If we do see this, then the stock can make a run up to resistance at $0.25. 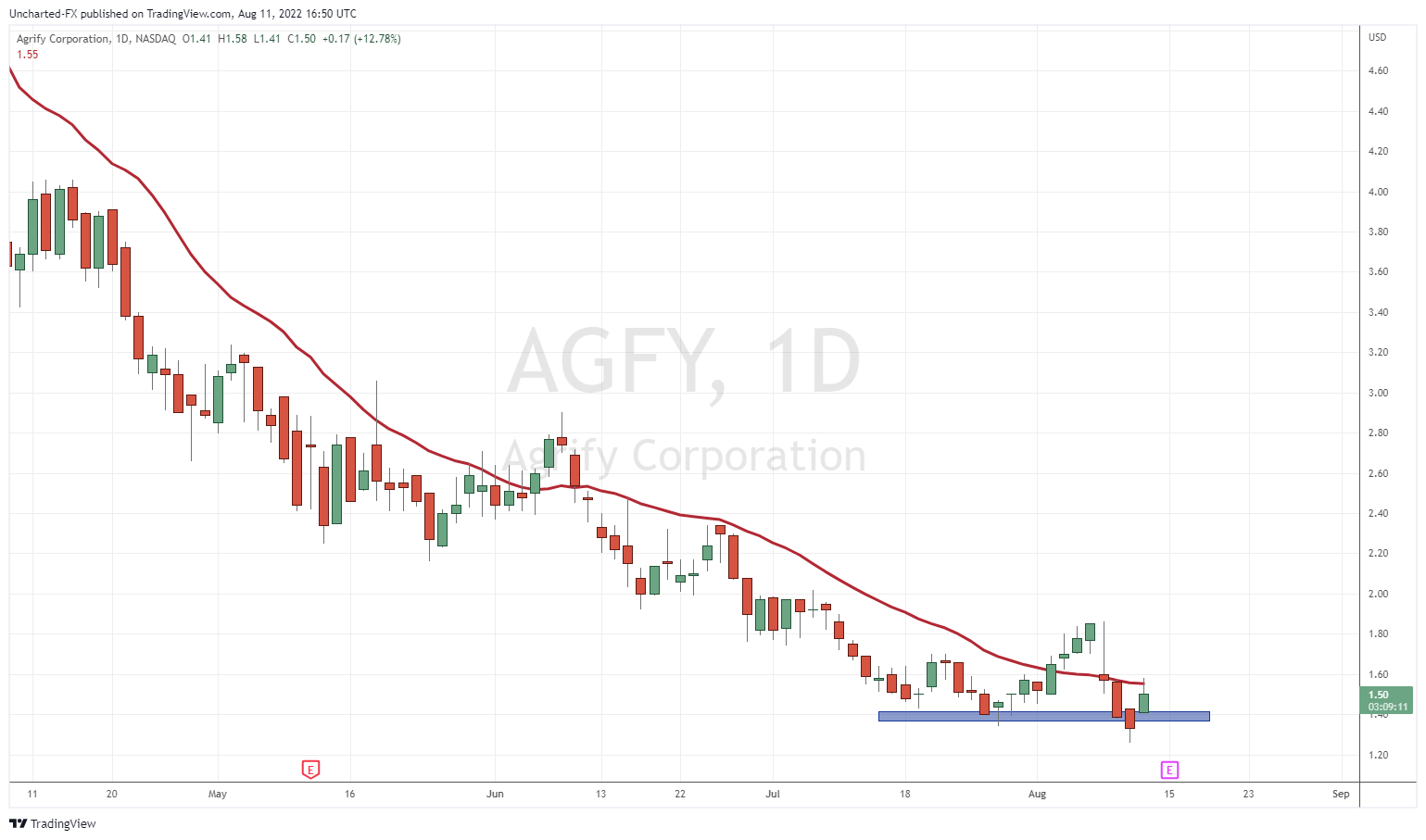 Agrify is getting a nice bounce back over $1.40 and thereby reclaiming a support zone. This is important because AGFY just printed new all time record lows. Now can we see buyers jump in here? The catalyst will be earnings. They are upcoming with a conference call on August 15th 2022.

The final audited financial results will be out before Monday August 15th. Very likely they are out right now as you are reading this article on the day it was published.

Technical wise we could be in for a reversal. I would like to see support here hold, but the major trigger comes with a breakout above $1.85.

If there is an agriculture play to jump in based on technicals, it would be Encanto Potash. 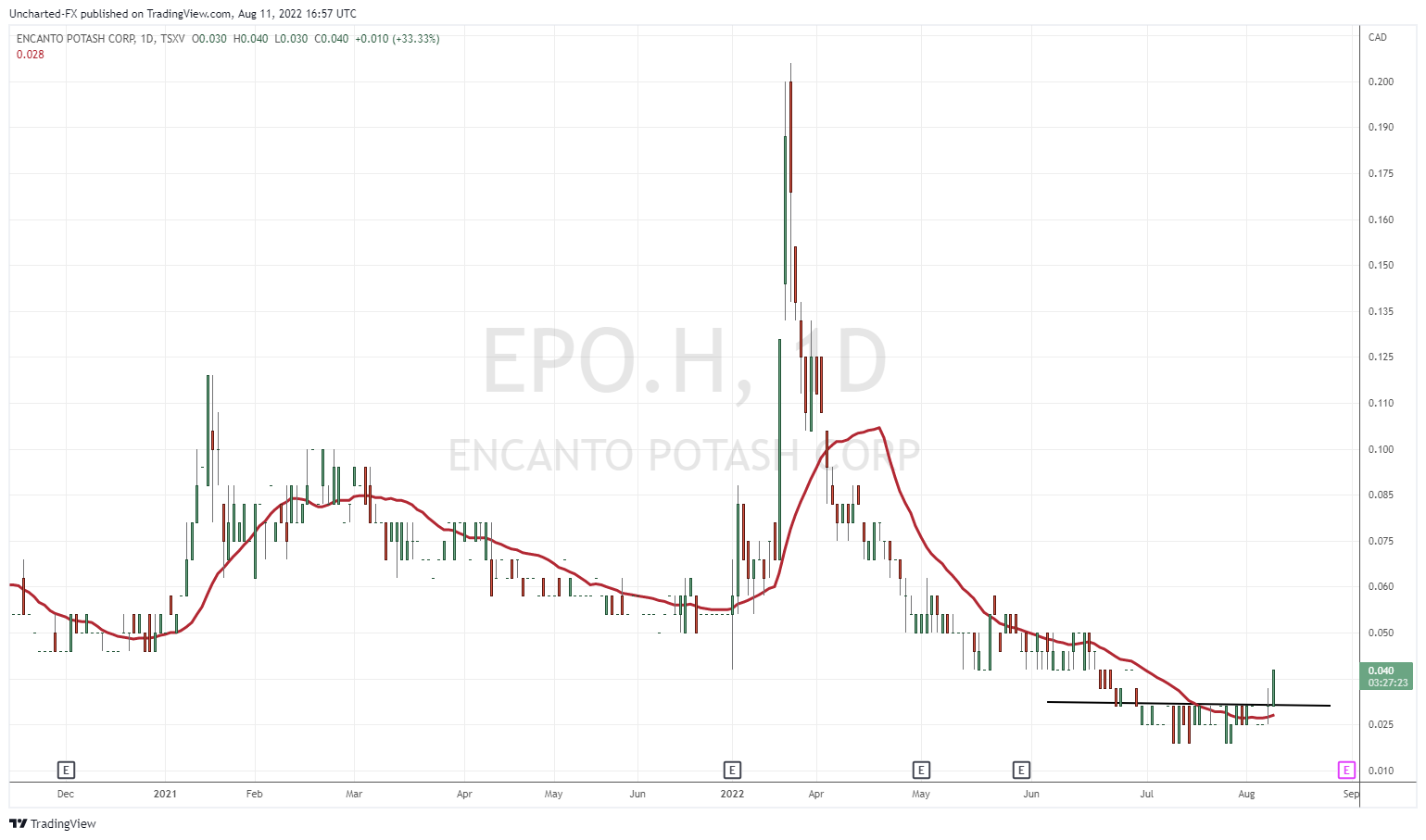 From a technical perspective, I like the long range the stock has been in during the Summer months. This range is breaking out now. Again, a strong green candle with large volume. The volume part is key because it means we likely get sustained momentum. As long as the stock remains above $0.03 on a close basis, we can expect more upside.