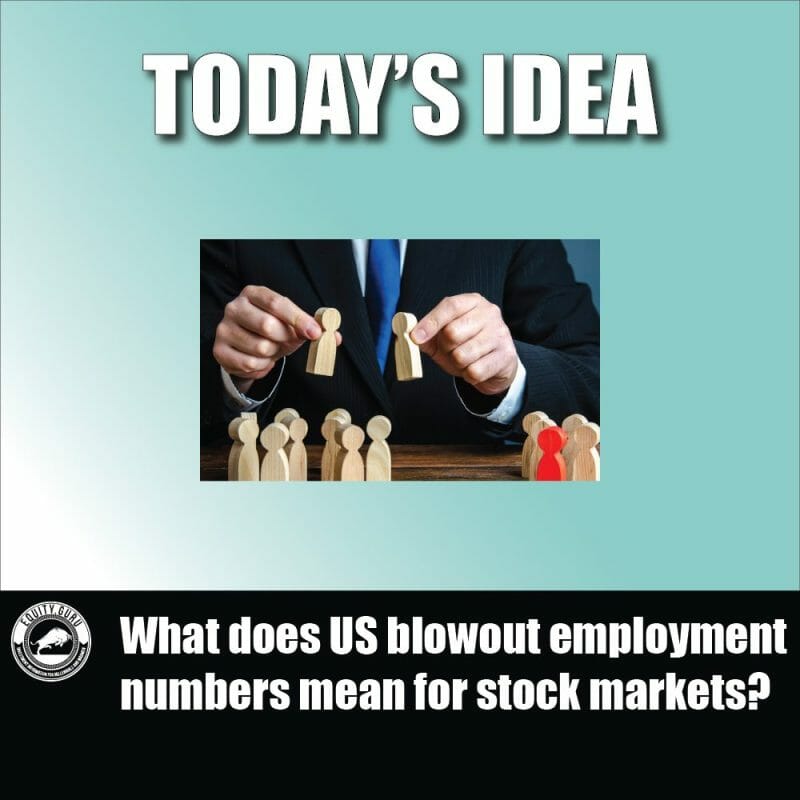 What does US blowout employment numbers mean for stock markets?

The highly anticipated US non-farm payrolls (employment) numbers for the month of July were released on Friday August 5th 2022. And boy did they beat estimates by a mile!

Nonfarm payrolls rose 528,000 for the month and the unemployment rate was 3.5%, easily topping the Dow Jones estimates of 258,000 and 3.6%. Double the estimate. This data was FAR better than expected.

Wage growth also surged higher, as average hourly earnings jumped 0.5% for the month and 5.2% from the same time a year ago. The Dow Jones estimate was for a 0.3% monthly gain and 4.9% annual increase.

The unemployment rate is now back to its pre-pandemic level and tied for the lowest since 1969.

What does this all mean for stock markets? Hold on to your seats.

First off, recall what Jerome Powell said in his last press conference.

“Think about what a recession is. It’s a broad-based decline across many industries that’s sustained more than a couple of months. This doesn’t seem like that now,” he said. “The real reason is the labor market has been such a strong signal of economic strength that it makes you question the GDP data.”

Added emphasis on the labor market comment. Turns out Jerome Powell was right. Many investors and traders have been acting as if Quantitative Easing is already beginning. They were thinking the Fed pivots soon due to recession. That isn’t looking like it will be the case in September.

“There’s no way to take the other side of this. There’s not a lot of, ‘Yeah, but,’ other than it’s not positive from a market or Fed perspective,” said Liz Ann Sonders, chief investment strategist at Charles Schwab. “For the economy, this is good news.”

Instead of a pivot, the markets are now pricing in a higher likelihood of a 75 basis points (0.75%) rate hike for the next Federal Reserve meeting in September. No pivot just yet. Rates are heading higher.

How do we know this? This is the most important chart to be watching right now: 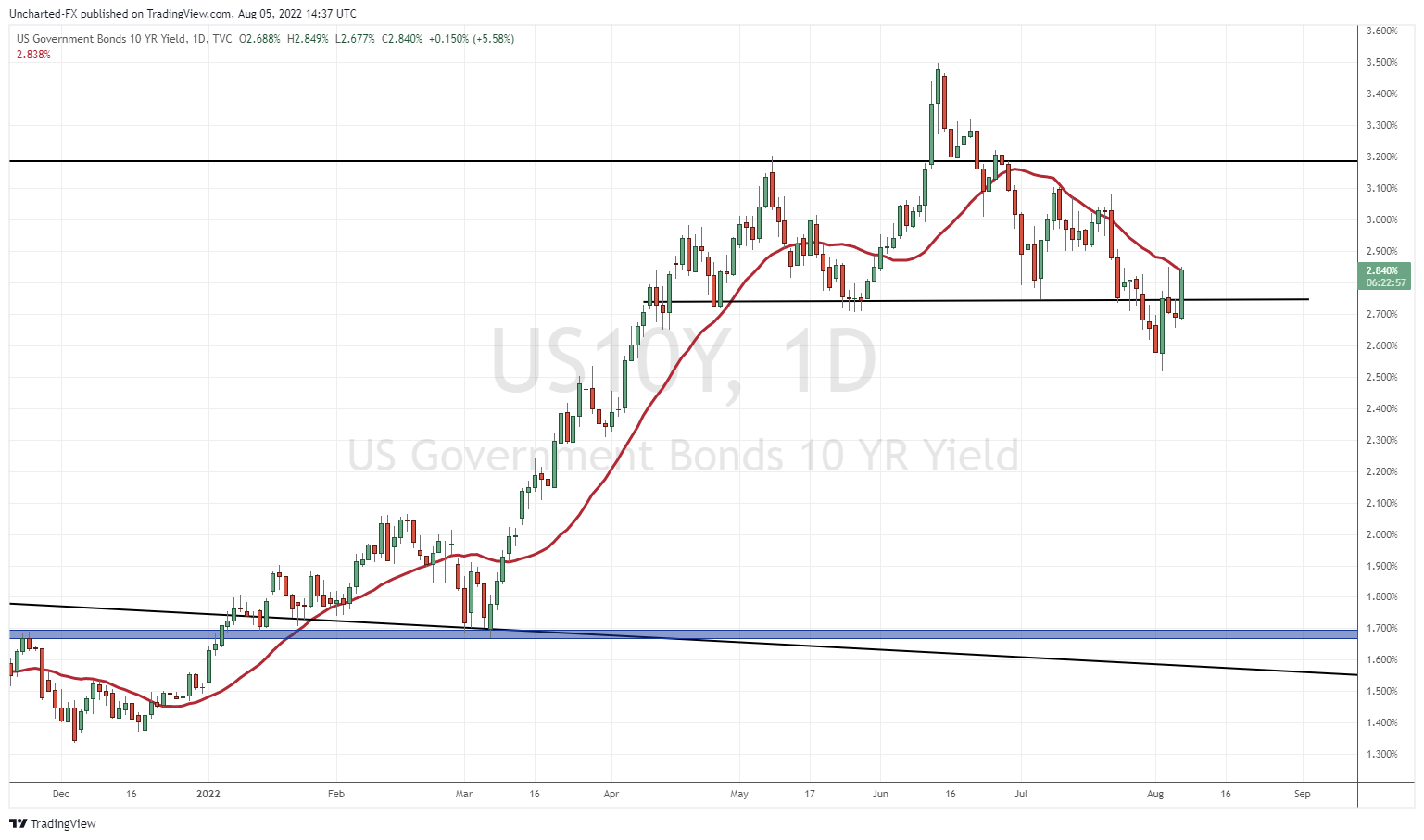 The US 10 year yield spiked post employment data. And it spiked hard.

Markets are now pricing in higher rates and a rate hike. More importantly, this chart could be pricing in MORE rate hikes down the road. The 10 year yield confirmed a technical reversal pattern known as the head and shoulders pattern. Rates were supposed to be heading lower. Investors and traders were pricing in the pivot.

This break back above 2.70% changes things. That reversal pattern will be nullified with a daily confirmed close above 2.70%, and could be heading much higher. 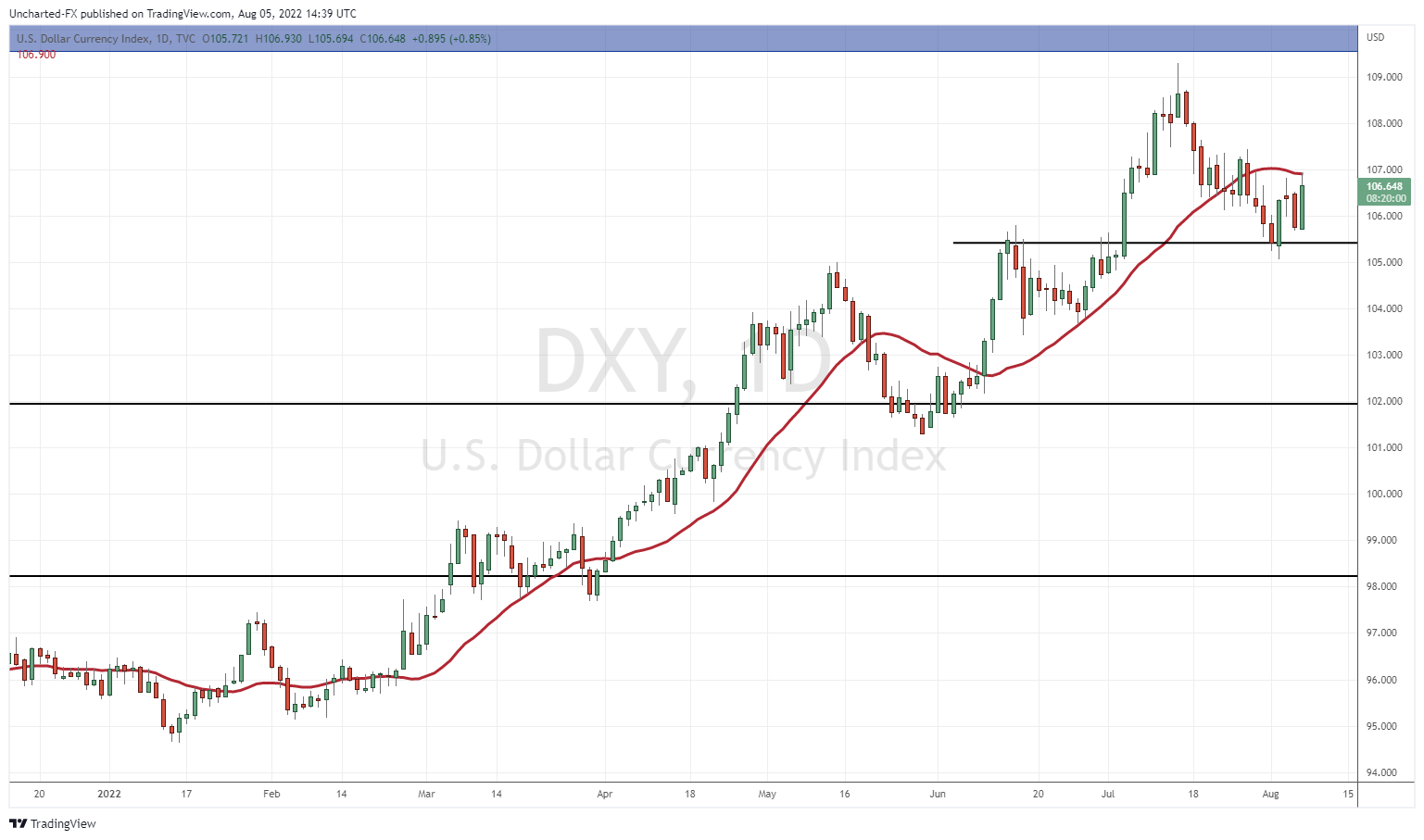 Even the US Dollar popped post employment data. This also confirms the markets are pricing in another Fed hike. The Dollar is to get stronger on interest rate differentials. Or, this is money running into the Dollar due to fear. When we have fear, we tend to see money running into bonds as well. We aren’t seeing that, so I can say this is not a fear move. However, what interests me is money flows. With the financial situation in Europe, and geopolitics stirring up in Asia, I just wonder if European and Asian wealth is running into the US Dollar? Just something to think about. 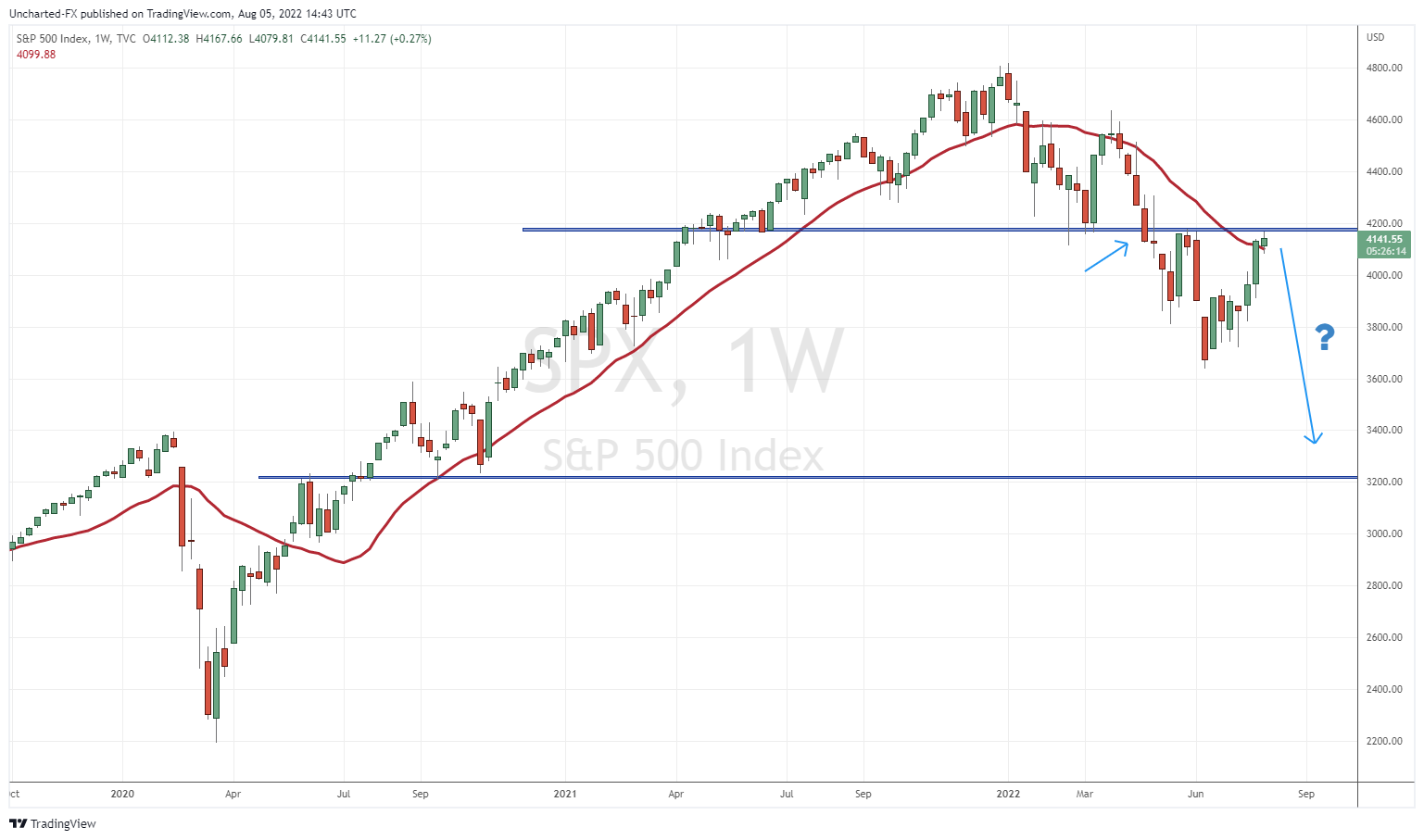 Putting all this together, what does this mean for stock markets? If markets were pricing in a Fed pivot, they would need to adjust. Rates are going to be heading higher, which is generally negative for stock markets.

I have been hammering this weekly chart of the S&P 500 to my readers for weeks if not months. The bear breakdown trigger occurred when we closed below 4200 back in April 2022. That triggered a reversal pattern, and according to technical analysis, we remain in a downtrend as long as price remains below 4200.

If the S&P 500 can confirm a weekly close back above 4200, then we have a reversal. I would turn into a perma bull.

So far no luck. The market is battling at this very important price ceiling zone. A rejection could mean that we continue the downtrend, and should expect to see lower stock markets as we head into Fall.

I want to point out that the Nasdaq and the Dow Jones also share the same structure. All US stock markets are retesting their major breakout zones and require a weekly close above to confirm a reversal.

These resistance levels are important, but your eyes should be on that 10 year yield chart. If it continues to climb higher, expect stock markets to crater.