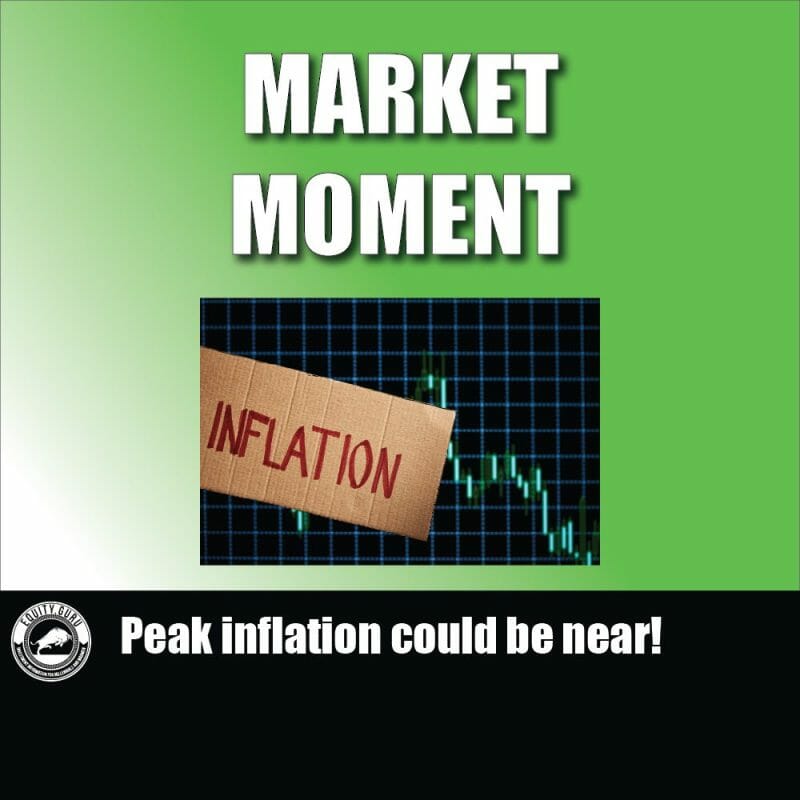 Peak inflation could be near!

Now all we hear about is peak inflation. This is key for multiple reasons. Yes, it would help the consumer if prices began to fall which would spur on an economic recovery instead of a recession. But more importantly, peak inflation would give the markets certainty of Federal Reserve and other central bank monetary policies. Particularly rate hikes and how many interest rates are coming.

Central banks have said they will keep raising interest rates until they tame inflation. This has led to a situation where the middle class is being pinched on two sides: rising interest rates making borrowing more expensive, and rising costs (inflation).

Everyone predicting peak inflation has been wrong. Many analysts got quite the surprise when the May CPI number came out to be 8.6%, the highest since 1981. Inflation is not showing any signs of peaking at all! 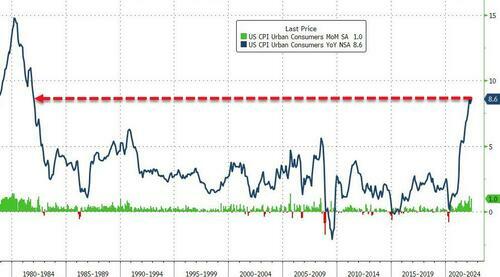 My readers know that I have been ignoring calls of peak inflation from mainstream financial media and central bankers. There are two types of inflation we are dealing with here: monetary and non-monetary inflation.

Monetary is about getting rid of that excess money in the system. The Fed began quantitative tightening this month (June 2022) with the whole purpose to combat this monetary inflation. We essentially have a situation where there is too much money chasing the same number of goods and services. Productivity hasn’t increased. In fact, it has decreased which is worsening inflation.

Oil is the lifeblood of the economy. When oil prices rise, it makes transportation costs rise. Companies then pass on this extra cost to the consumer in order to make a profit. This is the reason why things on store shelves, including food, are getting expensive.

Many analysts and traders I have spoken to have all said one thing: “The Fed has raised rates but oil prices remain high, hence inflation will continue coming in high”.

Oil prices are a key to this. 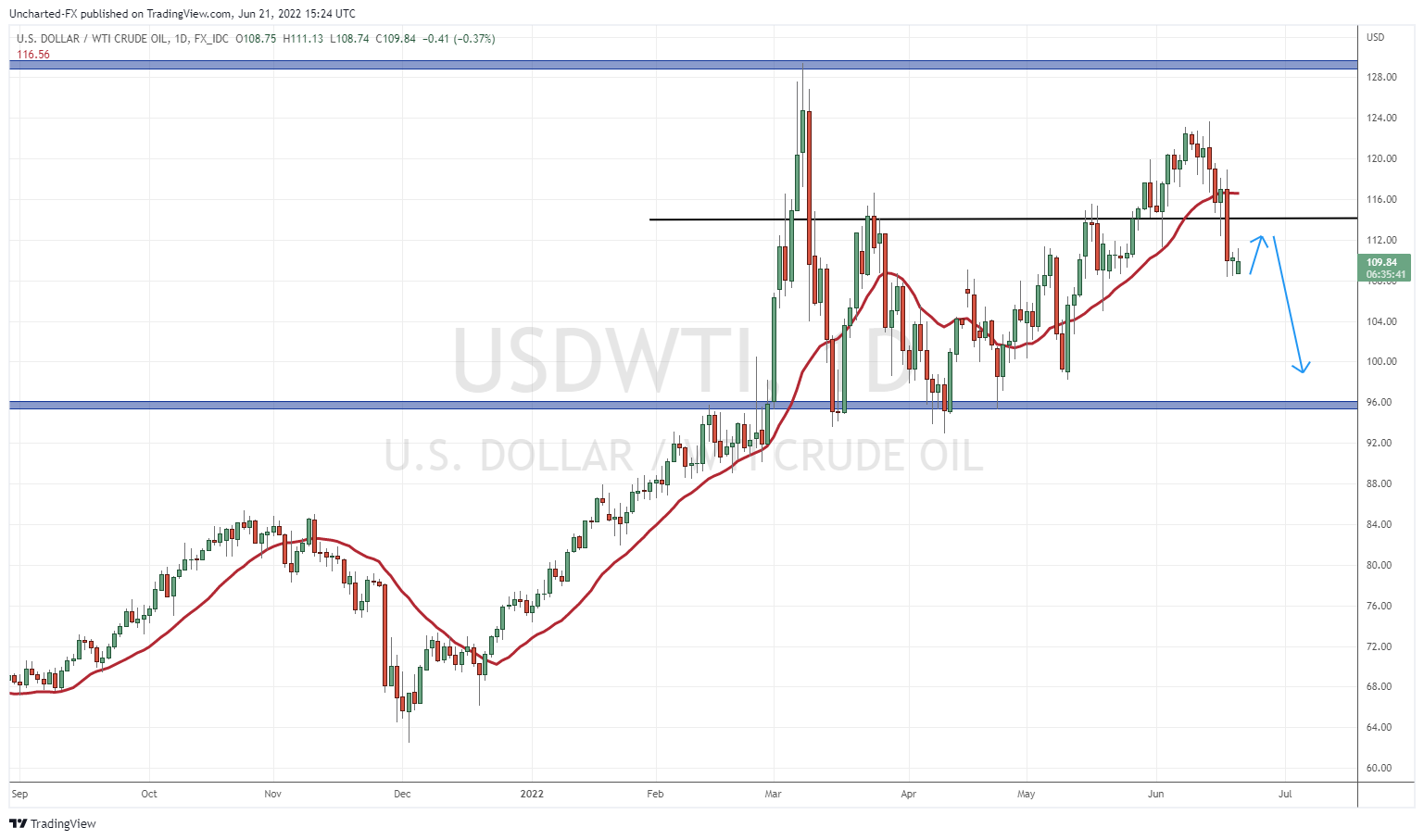 Now here is some good news which may hint at a lower CPI print for June. Oil prices are beginning to drop. A major technical support zone broke down on June 17th 2022. We closed below support at $114.25 with a major -6% day! This breakdown could be the beginning of a new downtrend on the daily chart. I have drawn out with arrows the potential trajectory of oil prices with this breakdown.

$100 is the key psychological number. $96 is my major support zone. If we actually confirm a daily close below these levels, then the case for peak inflation gets even stronger. This breakdown would mean much lower prices for oil.

The positive news builds up as OPEC+ has promised to increase production in July and August to lower prices. More supply than demand, bringing down prices.  OPEC+ will increase supply by more than 200,000 barrels per day in July and August. Nobody knows which member nations are doing so, but many believe the two nations that have the ability to increase production in such a short time are the UAE and Saudi Arabia.

Let’s not forget that President Joe Biden will be visiting Saudi Arabia in July. I am sure oil prices will be at the top of the list even if the White House says otherwise.

A pretty picture so far? I believe so. However, I do want to highlight there is a difference between oil prices falling, and oil not reaching its final destination! Europe and leaning off of Russian energy is a good example. Shortages would still cause prices to remain elevated.

Now, onto two factors which could nullify this oil price breakdown. The bad news I suppose.

First: China. China continues to lock down certain cities due to Covid. Many analysts are now of the belief that China is either doing this to deal with non monetary inflation by killing demand, or they are doing so in order to maintain pricing power due to a recession in the US. The former case sees demand die as people cannot go out and strain shortages in energy and food. The latter is a CCP reaction to lower demand of Chinese goods in the US, and in economic terms, means the Chinese have shifted their supply curve to the left to ensure prices for their exports remain the same even with lower quantity demanded.

How does oil fit into all of this? Well when China fully reopens 100%, demand for oil would rise. We know how the Chinese economy impacts energy prices. I mean remember 2020? China coming back would increase the demand relative to supply and could force oil prices higher.

Second: Russia. We don’t hear much about the war in Ukraine, but we are hearing about gas shortages in Europe. Heck, the Germans are reopening their coal plants for energy. So much for going green. What would drive oil prices higher is if the conflict in Europe gets larger. If it encroaches into other European borders.

Recent developments have me worried. 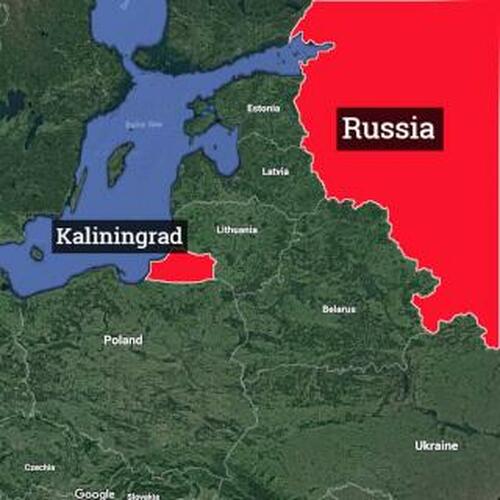 Lithuania has banned the transit of sanctioned Russian goods to Kaliningrad. These goods travel by railway, which goes through Lithuania. Kaliningrad is an enclave of Russia where the Russian Baltic fleet is located. The enclave is part of Russia but does not share a land border with the Motherland.

Anton Alikhanov, the governor of the Russian exclave, has estimated that the ban would affect some 50% of all goods flowing toward Kaliningrad by rail.

This blockade of sanctioned goods is unprecedented as the Russians and the Lithuanians have this agreement respected for decades. The Lithuanians in their defense are saying they have not blocked or denied transit. Trains can still go through. They are saying that sanctioned Russian goods are being blocked as it is in line with EU sanctions.

Russia has demanded that Lithuania immediately lifts the ban, with the Foreign Ministry in Moscow saying that if transport links are not restored in full “Russia reserves the right to take action in defense of its national interests.”

Some are saying this situation has the potential to escalate. Lithuania became the first European country to stop using Russian gas back in March. The Russians can’t respond by shutting down the taps. What will be their response?

Let’s hope we don’t see an expansion of the war in Ukraine. But I do think this development is important to keep in mind given that many analysts are saying this has the potential to escalate. If it does, you can guess what would happen to the price of oil.

In summary, the technical breakdown in oil has the potential to increase the probability of peak inflation. Further CPI numbers would drop if oil falls towards $100. The markets would really like to see this. However, keep in mind these two risk factors from Russia and China. They would cause a shock to oil and see the price reverse rather than drop. Keep a close eye on oil!