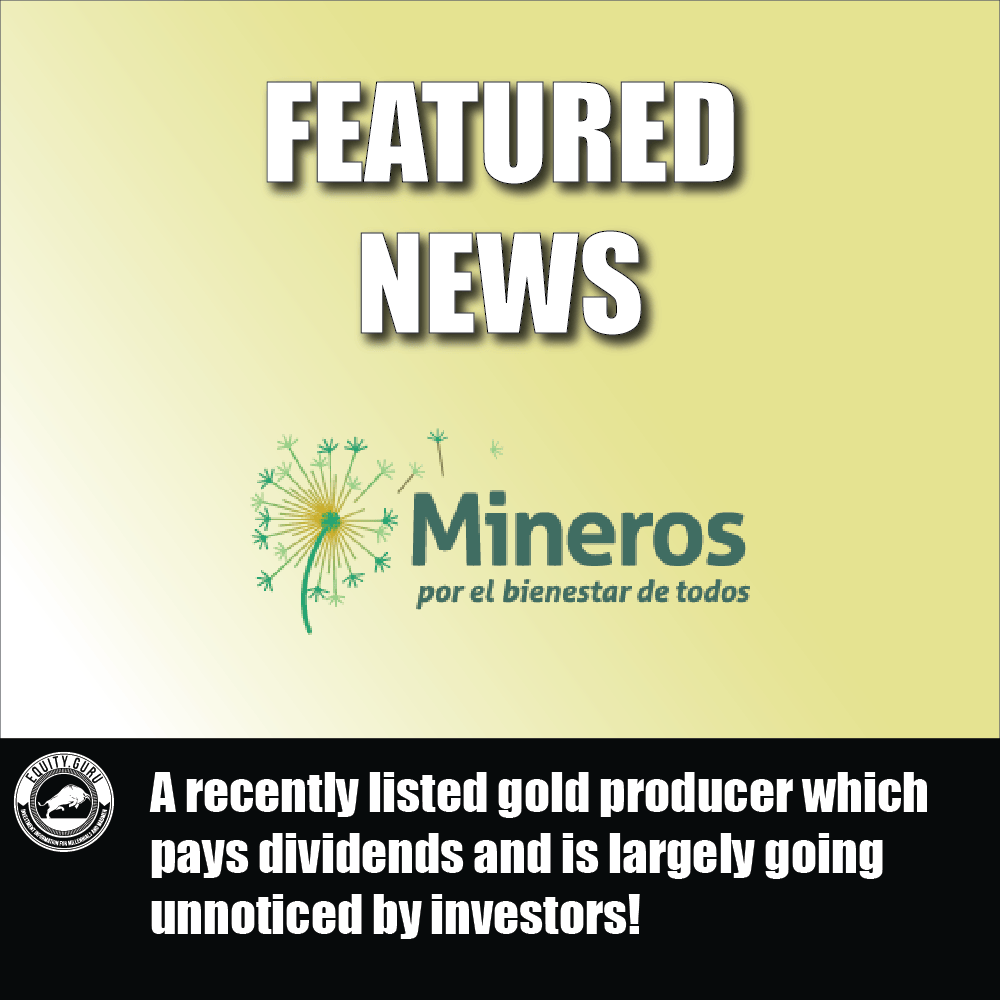 A recently listed gold producer which pays dividends and is largely going unnoticed by investors!

What if I told you that there is an emerging mid tier gold producer that has been in the business for 50 year, began generating positive annual earnings in 2004, pays a dividend and recently began trading on the TSX. What if I told you that this company is expected to produce between 262,000-285,000 ounces of gold in 2022, and is largely going unnoticed by most investors. Well readers, I am not making up a fantasy. The company I am referring to is Mineros. A gold producer with a diversified asset base throughout Latin America. 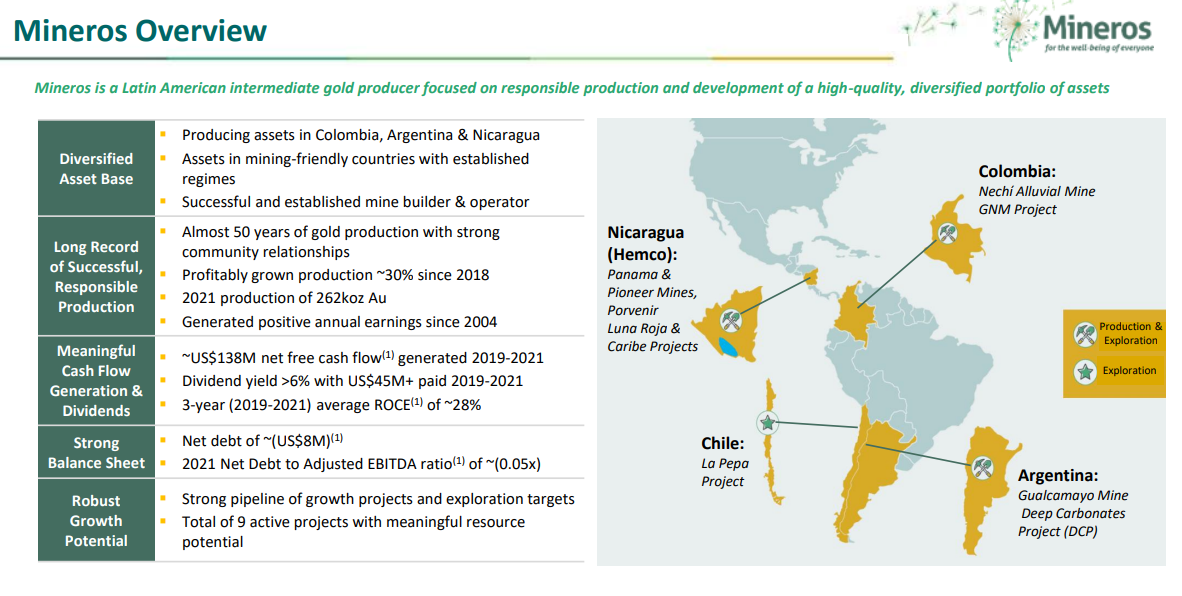 Mineros owns producing assets in Colombia, Argentina and Nicaragua. Jurisdictions that are mining friendly. Not only this, but the company has a strong pipeline of prospective exploration projects which provide potential for growth. A feasibility study is in progress at the Porvenir Project in Nicaragua. A PEA study is in progress at DCP and the La Pepa Project in Argentina and Chile. 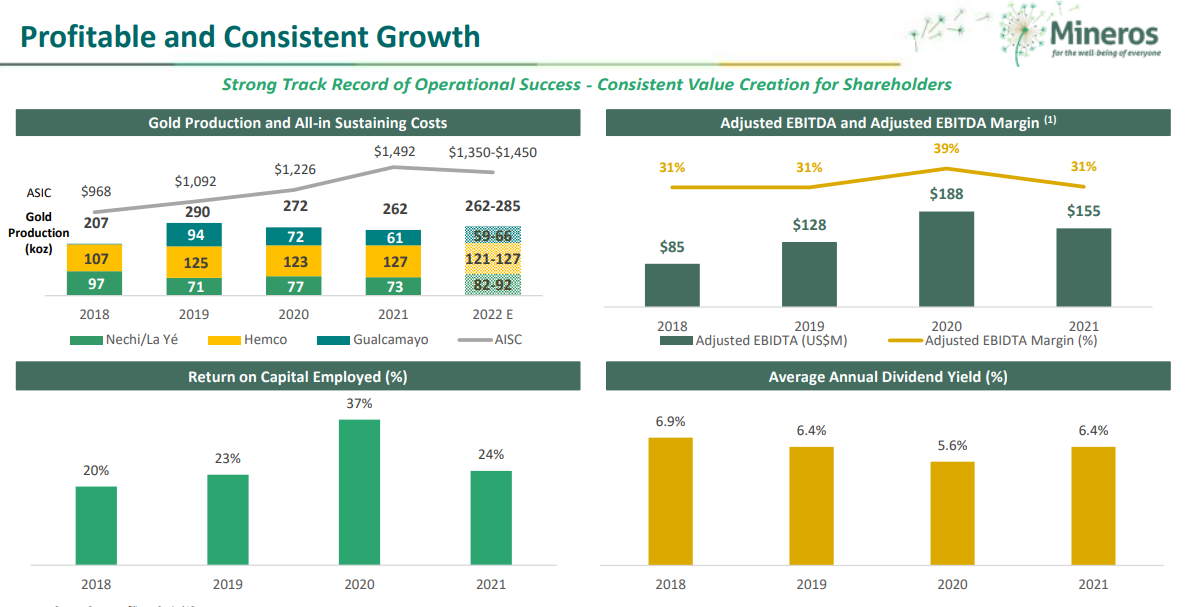 Here are some comparables for you to see how Mineros stacks up against its peers. Pretty solid stuff.

“Mineros had a solid first quarter of 2022. With over 66,000 ounces of gold produced at an all-in sustaining cost per ounce of gold sold1 of $1,377, the Company is on track to achieve its 2022 guidance.” commented Andrés Restrepo, President and CEO of Mineros. “Mineros continues to pay a solid dividend with an attractive yield. At the ordinary meeting of the General Shareholders Assembly held on March 31, 2022, shareholders approved a 7.5% increase in the total annual dividend per common share relative to 2021,” he continued. 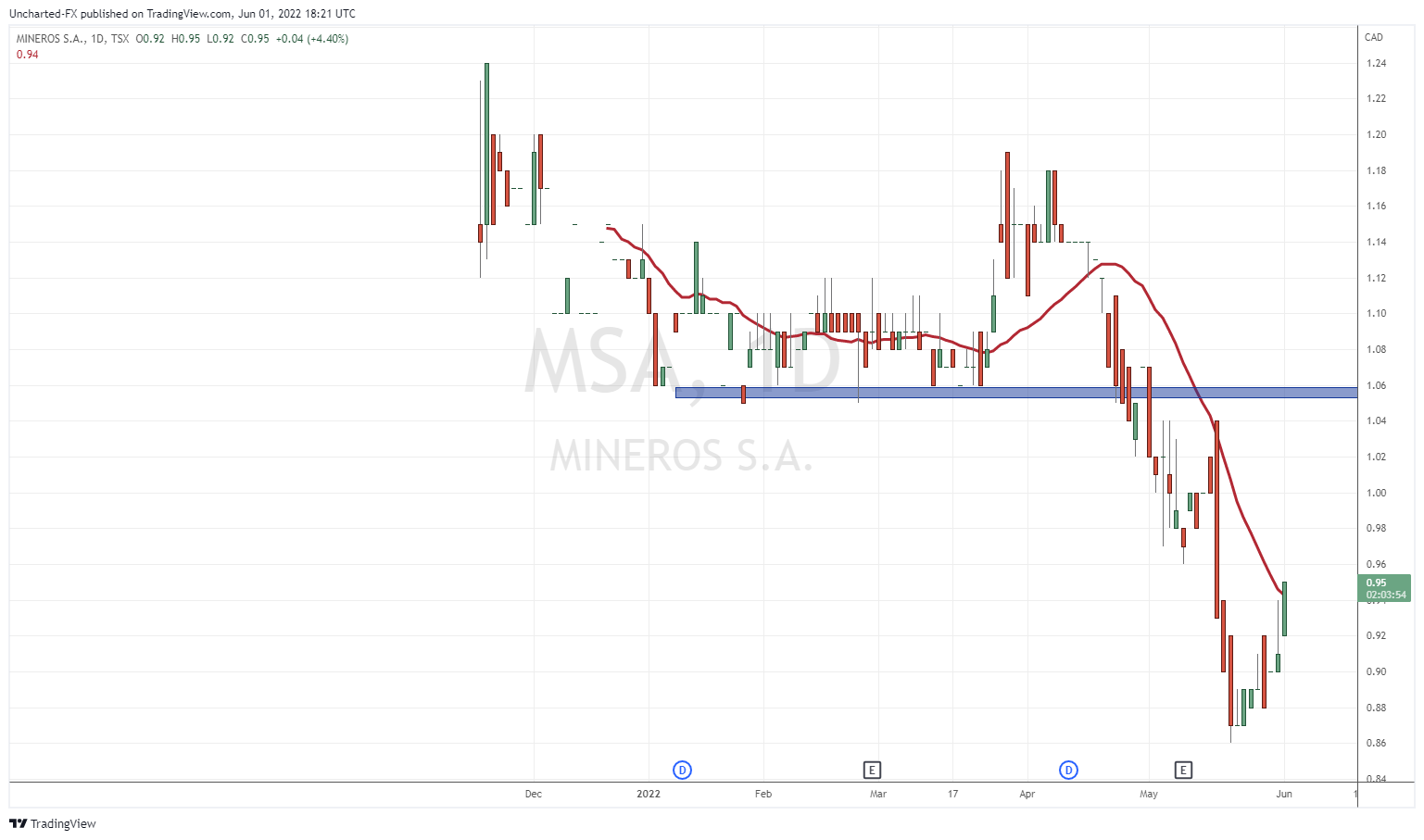 Mineros was listed on the Colombia Stock Exchange (BVC) in 1982. We will take a look at that chart below. In 2021, Mineros IPO’d on the TSX. The company raised US $34.3 Million in concurrent Canadian and Colombian offerings.

On the Canadian exchange, Mineros (ticker is MSA.TO) found some base at $0.86. It looks like we are heading back to the all important $1.00 zone. The major resistance I will be watching is the $1.04-$1.06 zone. What was once support now becomes resistance. If we can climb back above this level, this would be big for the Canadian listing. 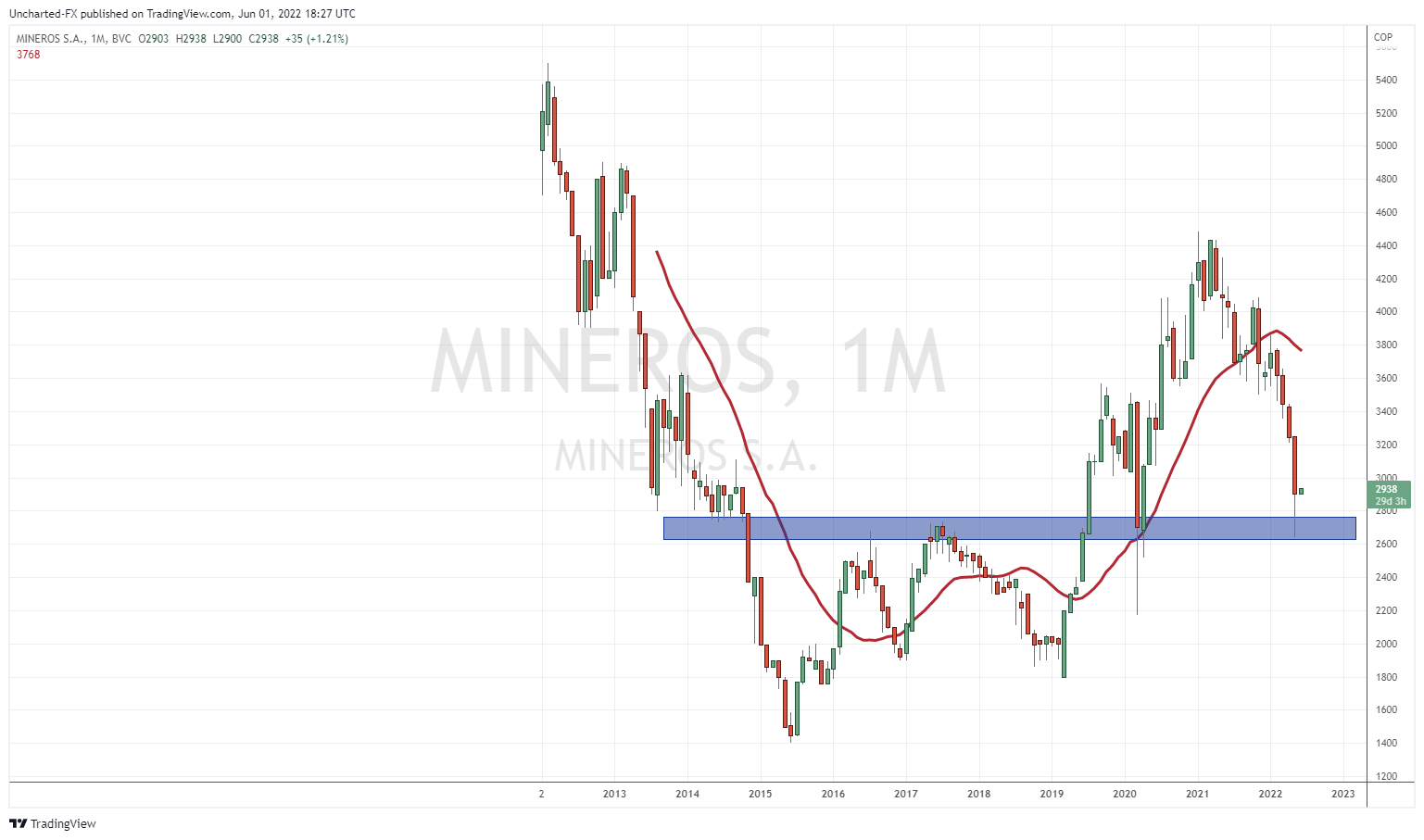 We have more price action to work with if we take a look at the Colombian listing. The daily chart set up actually looks the same as the Canadian listing. I have the monthly chart above because I spot something quite major. Mineros tested a major support level on the monthly chart at 2600. Note the monthly candle with the large wick showing buyers stepping in to buy at support. Now, I am watching for some sort of pattern to be confirmed on the daily chart at these levels. We do have a nice hammer candle for those more technically inclined already printed. Buyers are definitely stepping in here at 2600.

A move higher from here means it is likely Mineros does head to our resistance zone on the Canadian listing.

In summary, this is a gold producer that has been in business for a long time and is bringing in 200,000 plus gold ounces per year. The company also pays a consistent dividend and has many projects in the pipeline for growth and increasing production. The company has a track record of profitability, a diversified asset base, experienced management, a solid pipeline of projects, and a strong social license ( this is definitely a company that takes ESG investing very seriously!).

There are a lot of positives with Mineros and I would say the company is still under the radar. Hopefully this article will help to bring this story to the market and aid investors in considering a solid long term gold mining play.