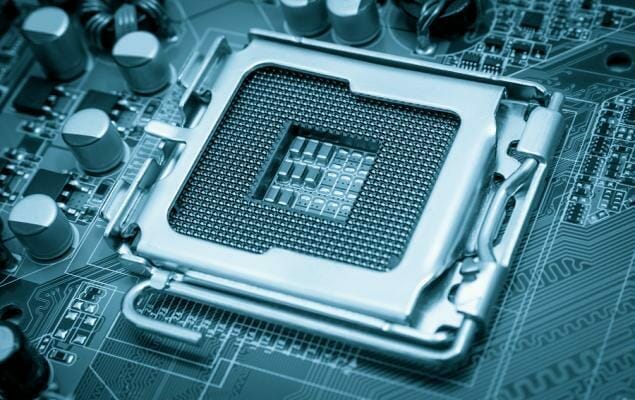 Semiconductors. They are pretty much in everything. A few months ago I was buying a new car. I remember hearing about supply chain issues hitting new cars. There were not many on the lot, and I asked the salesman if it was due to these supply chains. He said kind of, but the major reason is a shortage of semiconductors which are used in new vehicles. No joke, I sort of felt like an idiot. Probably something I should have known, but yea, semiconductors are pretty much in every major appliance, vehicles and electronics.

Some geopolitics for you all. Taiwan is the king of semiconductors. Most of them come from that country, and a company by the name of Taiwan SemiConductors (ticker: TSM) are the big boys who source out their semiconductors to many large corporations. Recently, things are shifting because of the situation between China and Taiwan. Imagine a country like Japan, which is big on technology and semiconductors, not receiving them due to a Chinese blockade of Taiwan. Corporations are beginning to invest more into semiconductor production. 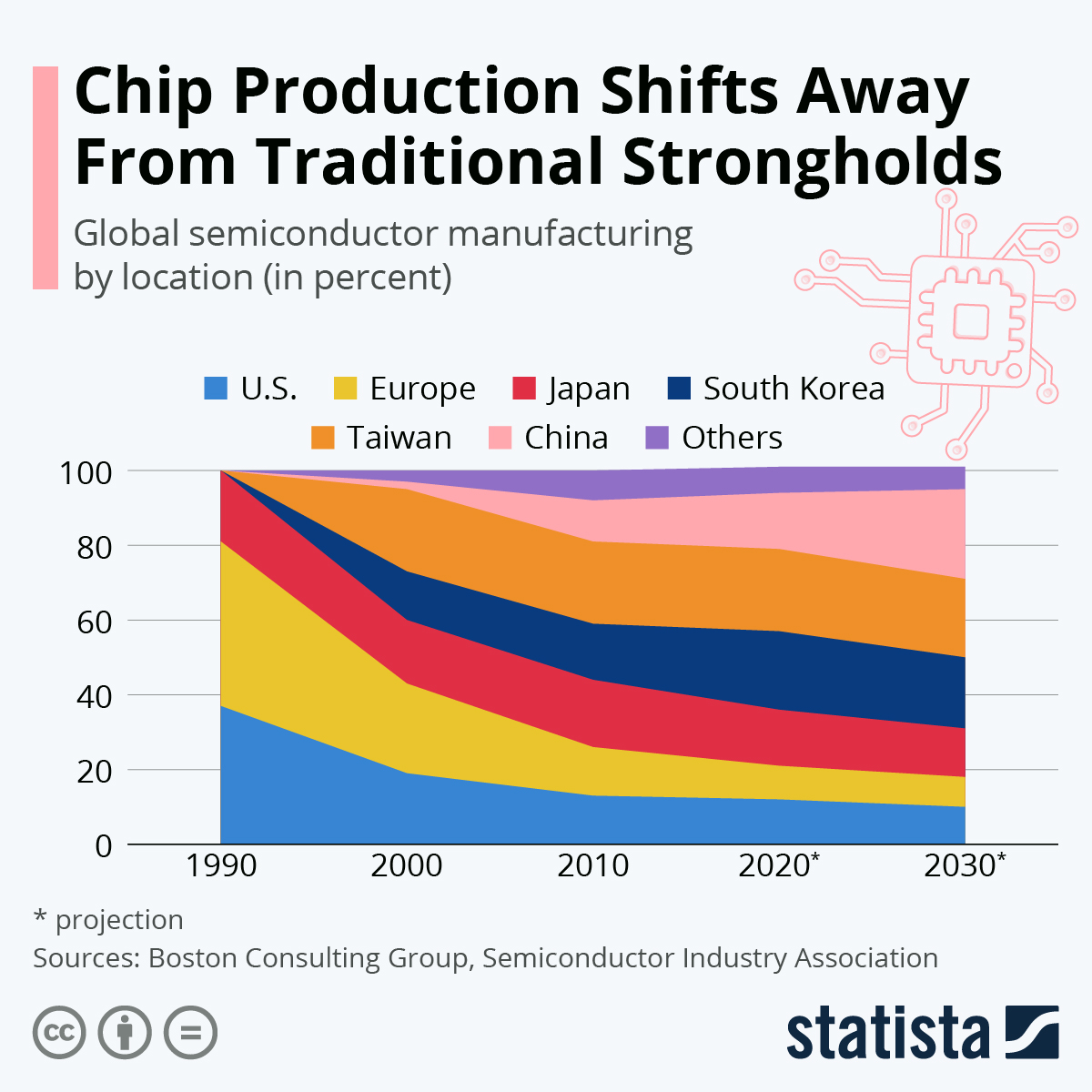 Take Samsung for example. Just recently, they have announced a $17 Billion dollar investment Semiconductor plant in Texas. Not in Asia or South Korea, but we are seeing a diversification of semiconductor supply chains. I think this trend continues. 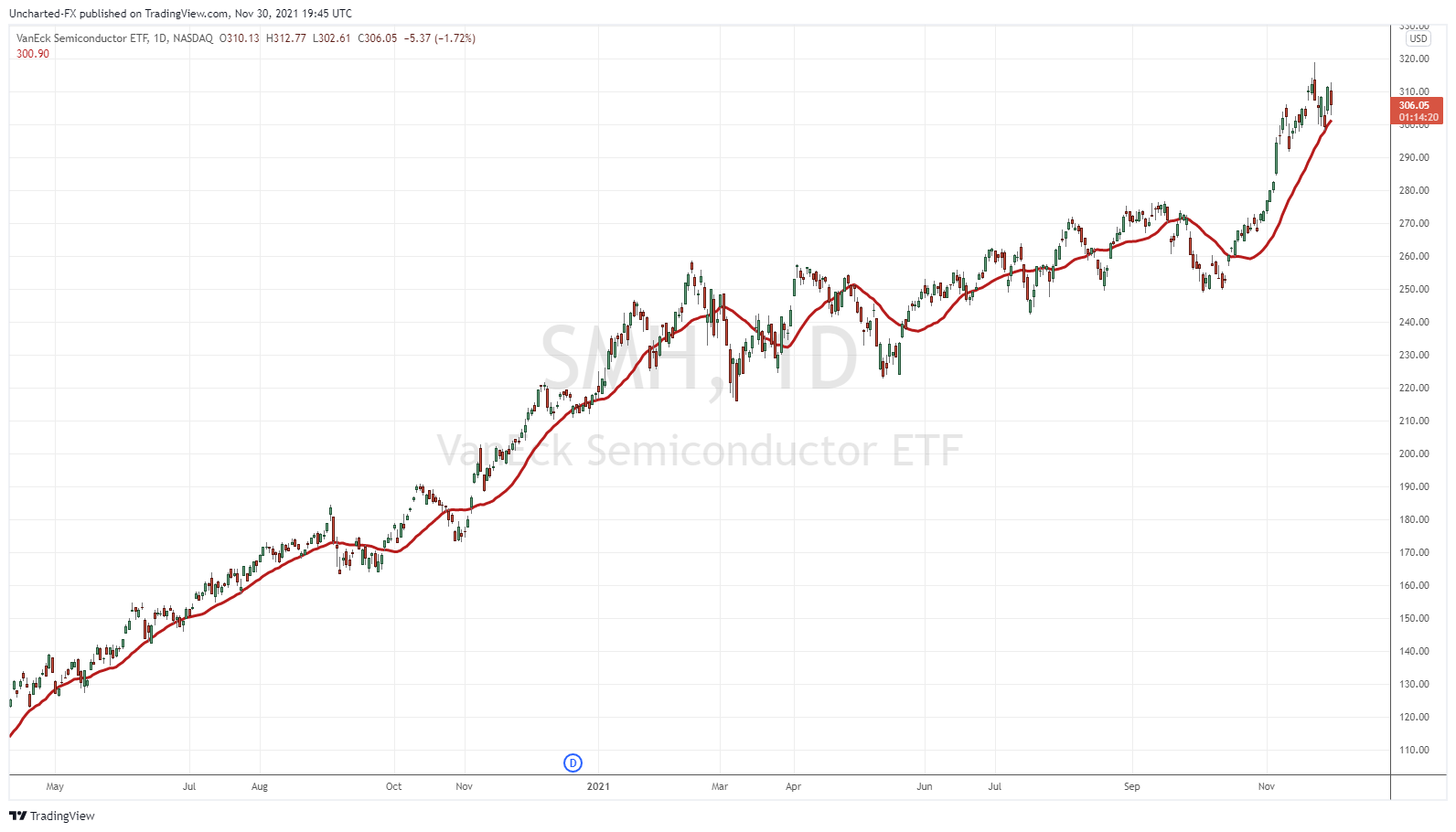 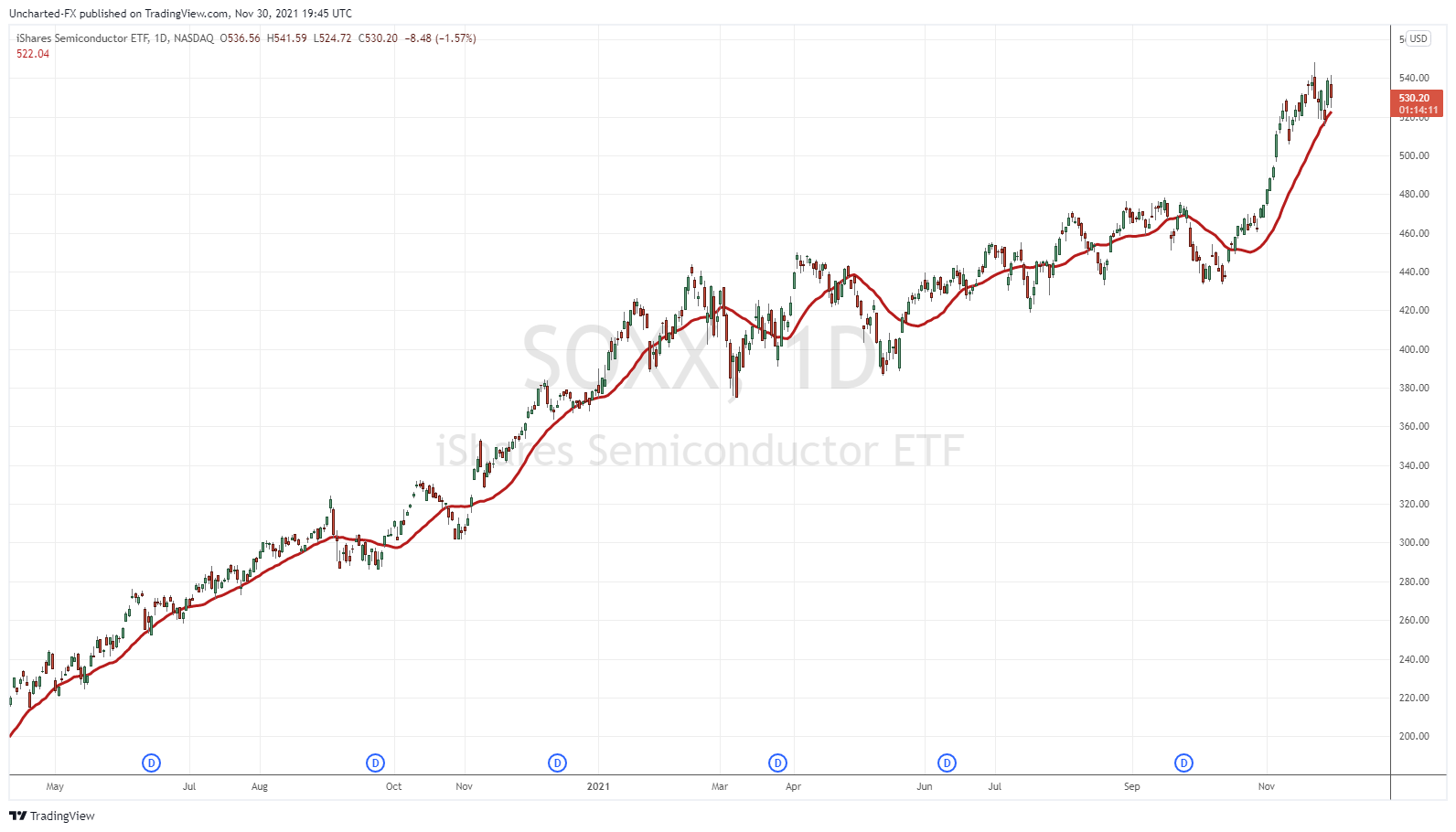 When it comes to investing in semiconductors, it is a very popular investment. The semiconductor ETFs SOXX and SMH have been making record high after record high. They are holding up well given the market sell off. Wouldn’t be surprised if we get a bit of a pullback. Support for SOXX stands at $480, while support comes in at $280 for SMH. That is if we break below this interim structure.

When you look at the US side, you hear about companies and tickers like Advanced Micro Systems (AMD), Intel (INTC), Micron Technology (MU), and Nvidia (NVDA) just to name a few. Take a look at the price action on AMD, MU, and NVDA. Sort of a spoiler since you have seen the semiconductor ETFs, but yea, big moves. Record high after record high. 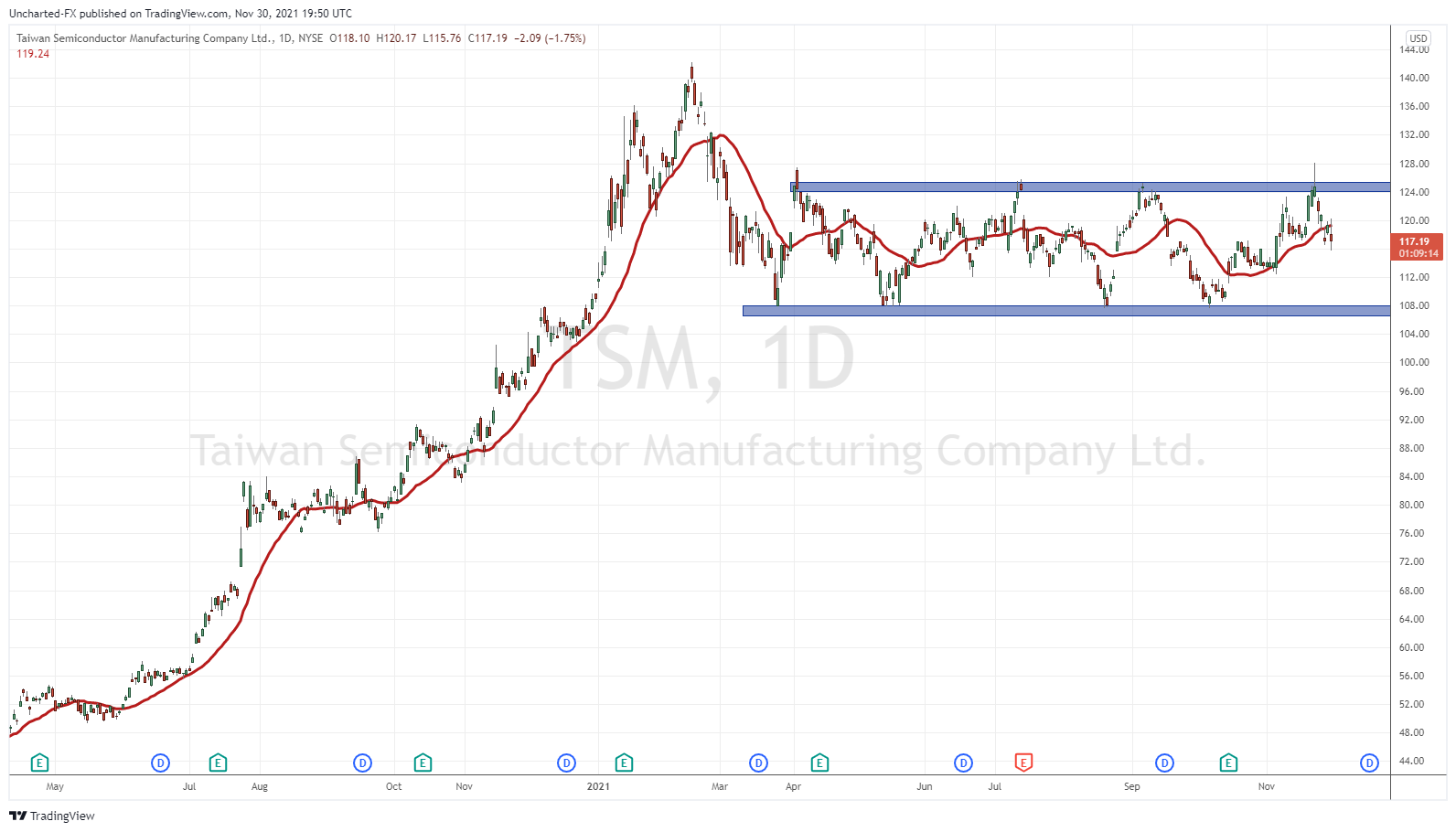 I like the technical set up on TSM. We are in a clear and well defined range between $108 and $124. Just need the break and close above or below these levels to determine the next move. Hopefully it is to the upside. We tried on November 22nd 2021, but to no avail. I sound like a broken record I know, but this is why we await for candle closes! Super important!

If TSM does end up closing above $124 in the future, we are heading towards new record highs. Something which would also see Taiwan Semiconductors join the $1 Trillion market cap group.

Something that doesn’t get too much attention is the Canadian semiconductor space. It is quite small in comparison to the US, but it is a space to watch. I invested in a company back in the day called Photon Control. They recently were acquired. Japanese camera company Canon also acquired Canadian semiconductor company Redlen for $341 million CAD. As I said, geopolitics is forcing nations to diversify semiconductor supply chains and sources.

Check out TK’s deep dive on this space. His article on semiconductors was posted today on Equity Guru. The Canadian semiconductor market is tiny ($3 Billion) compared to the behemoth that is the US.

POET Technologies is a design and development company offering integration solutions based on the POET Optical Interposer™ a novel platform that allows the seamless integration of electronic and photonic devices into a single multi-chip module using advanced wafer-level semiconductor manufacturing techniques and packaging methods. POET’s Optical Interposer eliminates costly components and labor-intensive assembly, alignment, burn-in and testing methods employed in conventional photonics. The cost-efficient integration scheme and scalability of the POET Optical Interposer brings value to any device or system that integrates electronics and photonics, including some of the highest growth areas of computing, such as Artificial Intelligence (AI), the Internet of Things (IoT), autonomous vehicles and high-speed networking for cloud service providers and data centers. 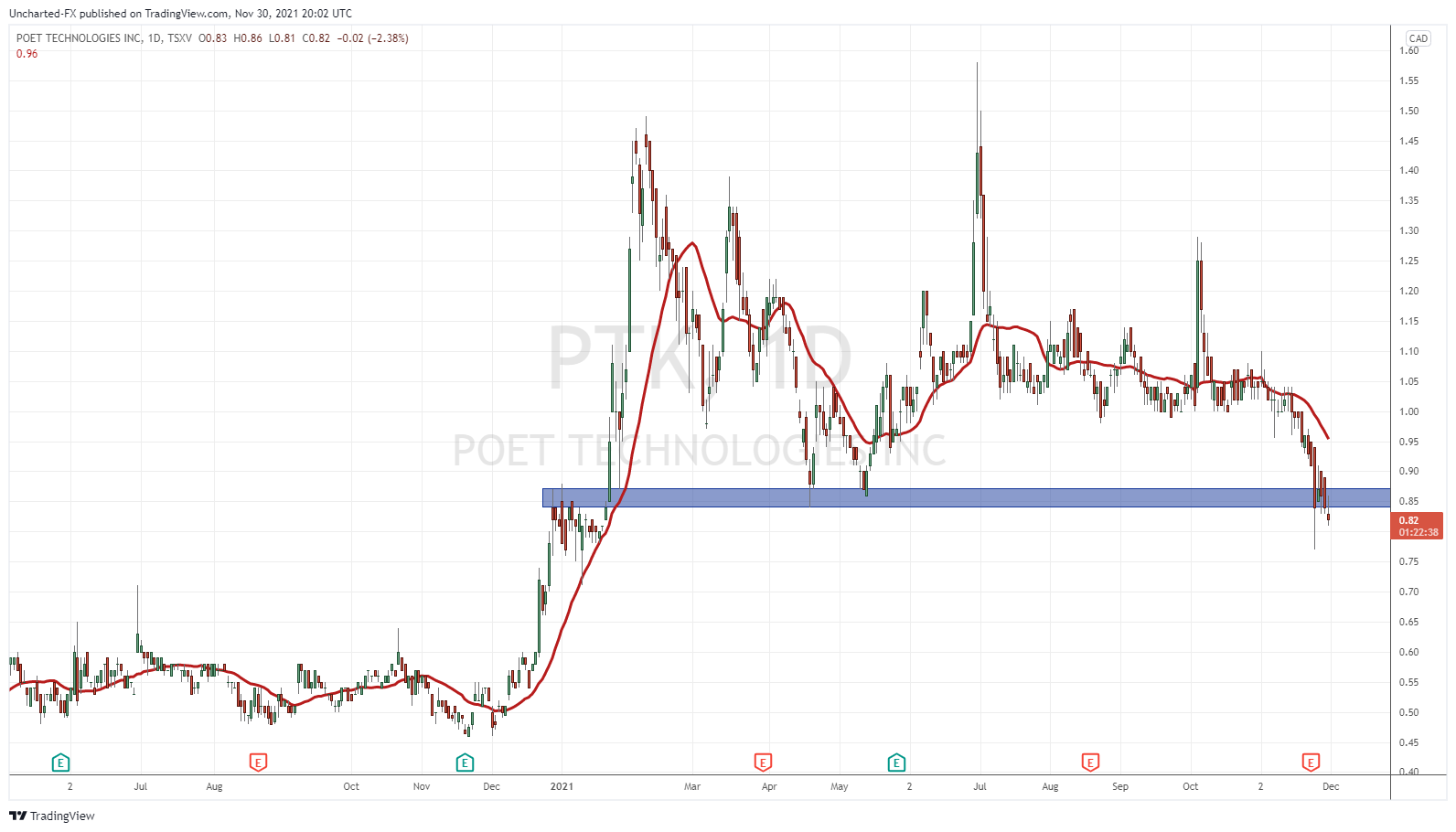 Very cool stuff, and one of my favorite companies to watch in this space. A big day on the charts. PTK is testing a major support zone. In the past, this zone has held up three or more times. Bulls enter positions here. The way this candle closes will determine the next move. Keep in mind that broader stock market pressure is weighing in on all these charts. If this zone does not hold, we could see a deeper move lower down to $0.60 zone. Watch to see if price can remain above $0.85.

Not going to lie, I am very intrigued by this company. Not only are they making revenues, but there is something bigger that you may have heard of. Spectra7 focuses on virtual reality and gear. There’s a thing called metaverse making waves across the investing and crypto world. I see this as a Metaverse play. 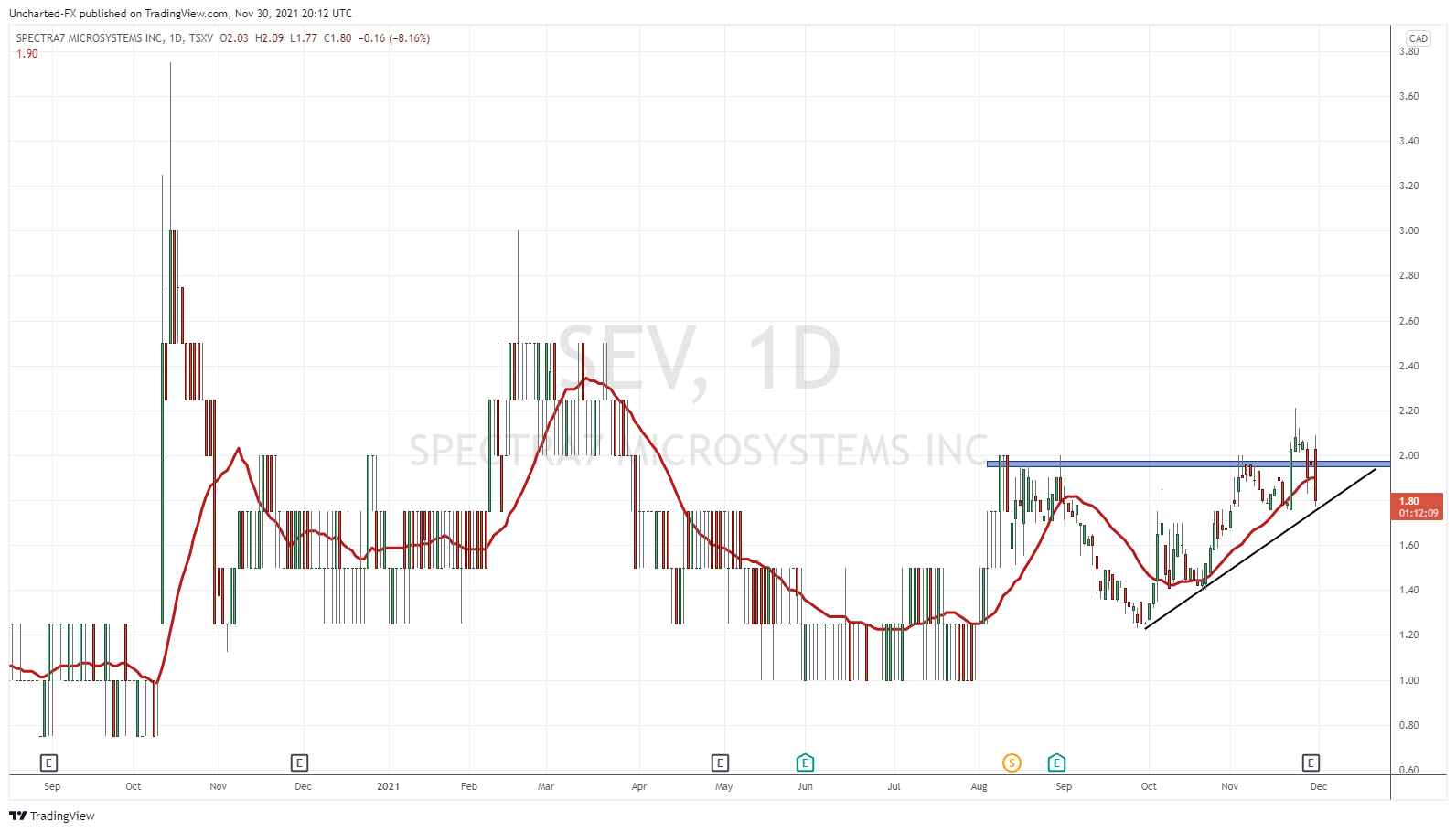 You can see a difference in the trading volume ever since Spectra7 reported revenues. The candlesticks are much cleaner rather than erratic. We have good volume now coming in regularly. I really liked the breakout above $2.00. Unfortunately we did not hold. However, we are still in an uptrend as evident by my trendline. Seeing some buyers as we test it. If we close below this trendline, we will see some pressure and I would look at $1.60 and $1.40 for support.

Quantum eMotion Inc. engages in the development of cryptographic solutions based on quantum random number generator in Canada. It develops and markets encrypted communication solutions for various sectors, including Internet of Things, mobile communication, and military communication. 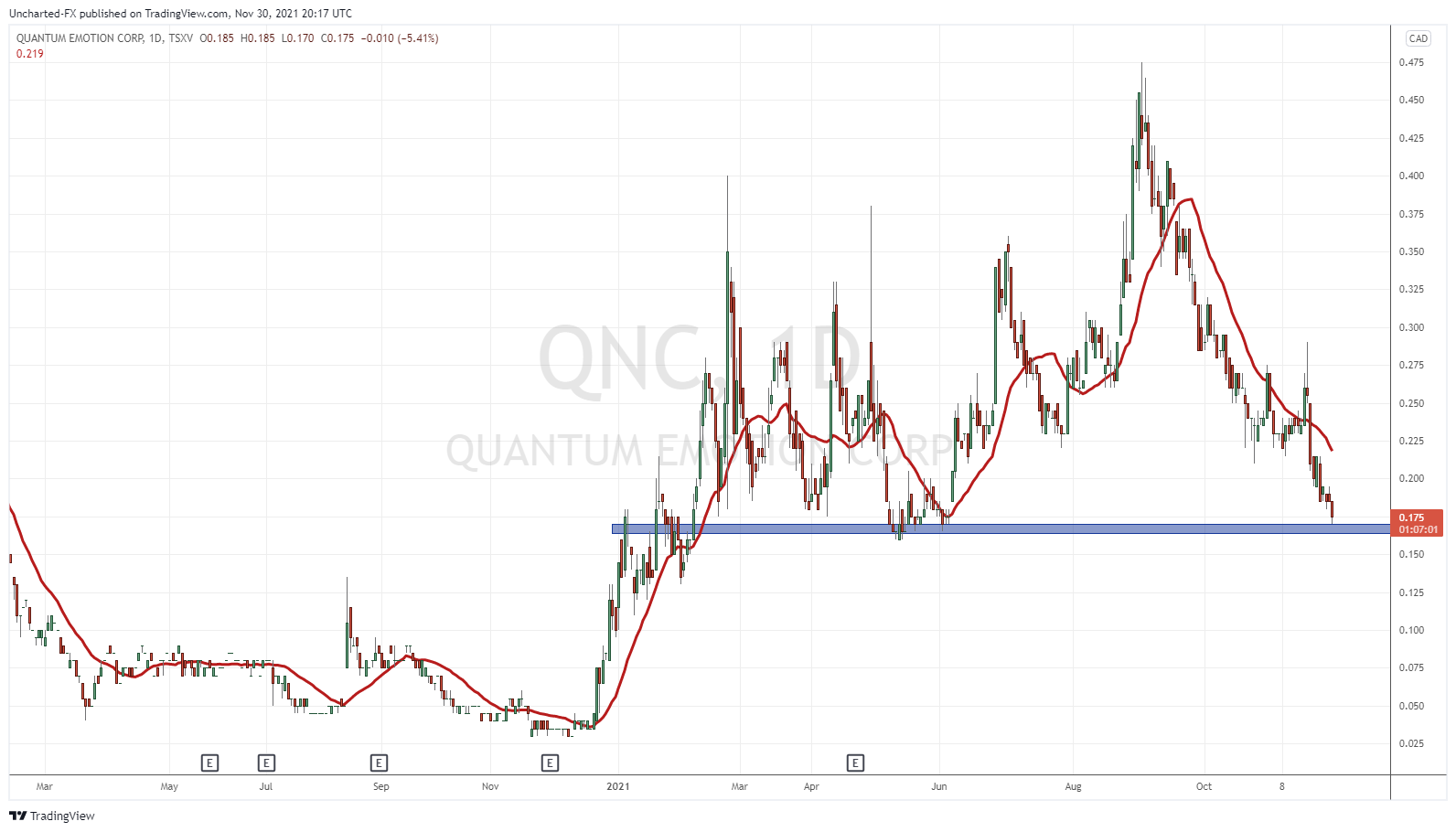 A stock that has been in a very long downtrend. But perhaps a bottom could be in the works. A MAJOR support zone here at $0.175. Buyers are stepping in. Ideally, I want to see a nice green candle with good volume. It would also help if we see a base being built here, so a few days worth of range. I would then be looking for some sort of reversal pattern. 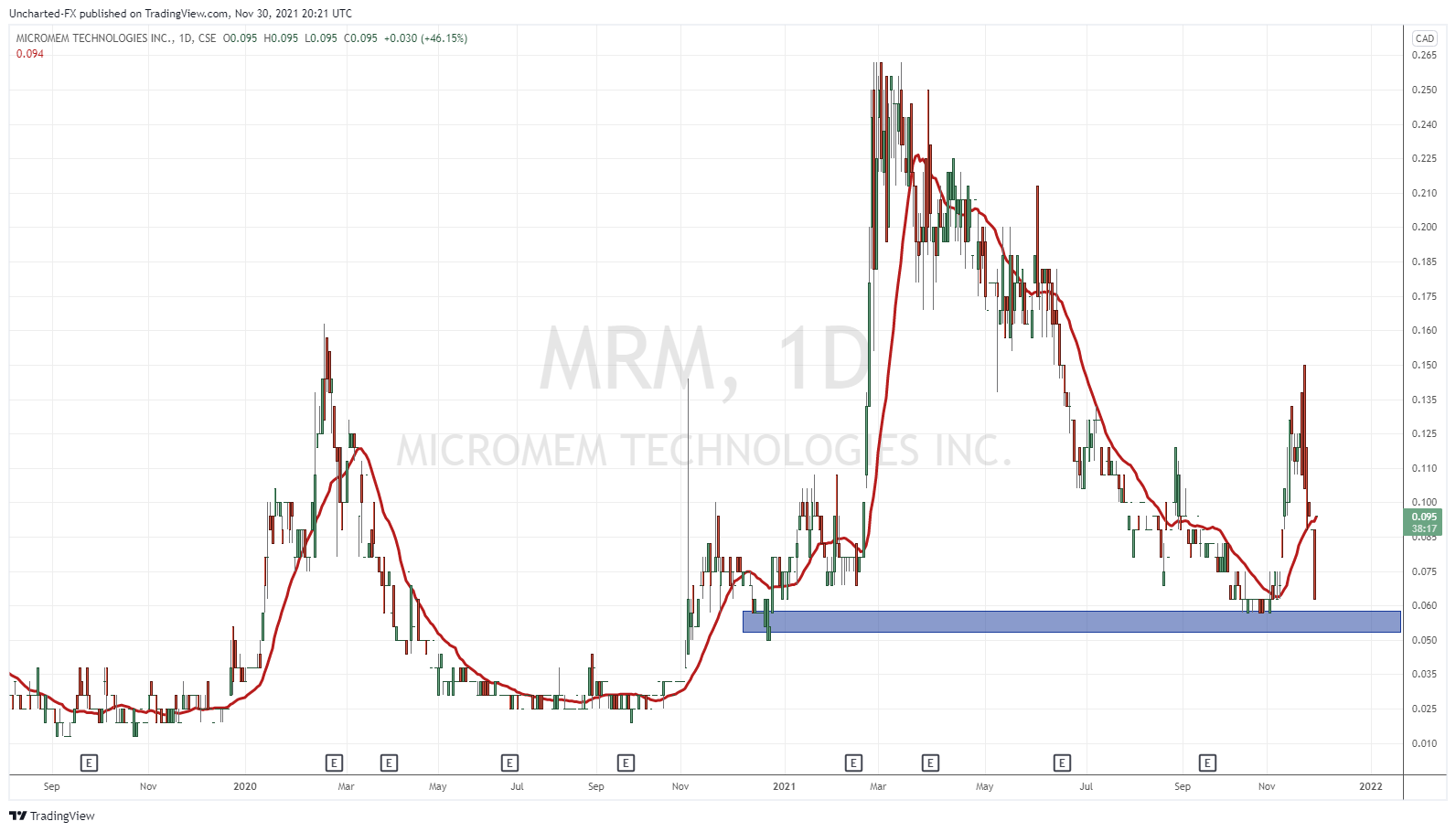 Micromem has recently done some financing, but the stock bas been falling hard the last few days. We are returning to a major support zone at $0.06. We were here earlier this month, and found a bit of a bottom which saw buyers step in and take the stock up to $0.15. Can we repeat? The company has some cash to trigger a catalyst. I just want to see some signs of buying here. Look for good volume with a green candle here to indicate that some buyers are stepping in.