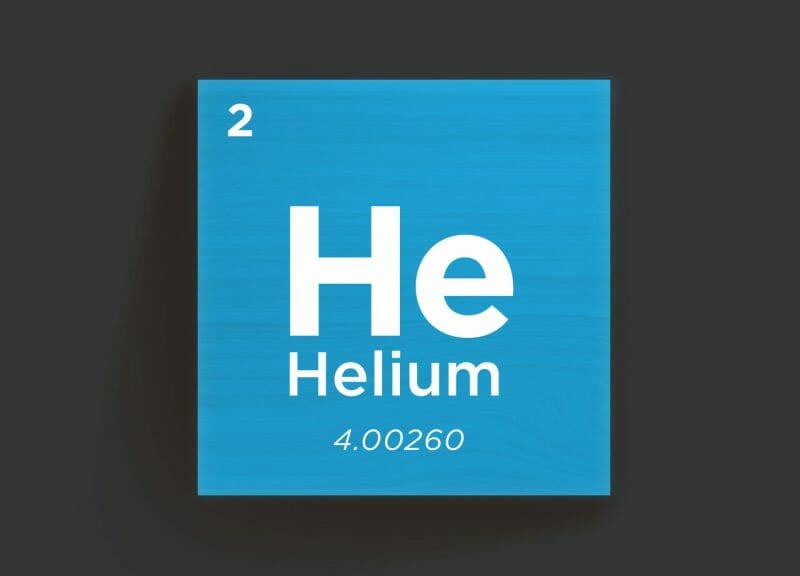 I have to admit, when someone told me to take a look at Helium stocks, the first thing I said was, “where does the demand for Helium come from? Is it from clowns and other entertainment purposes?” Little did I know that Helium has much more important and life saving uses.

First off, did you know that Helium is mined? After Hydrogen, Helium is the second most abundant element in the universe. It is also the second lightest making it easy to slip out of the Earth’s atmosphere. A lot of it is found deep under the Earth’s crust, which naturally provides a challenge to harvest it.

So how is Helium extracted?

Helium is mined along with natural gas, using a drill rig to drill wells deep into the earth’s crust. A drill rig must penetrate a layer called the Cap Rock to reach a natural gas reserve. Once located, the natural gas and Helium rise and fill the rig, which are then led through a series of piping systems that transport the natural gas and crude Helium to a refining plant.

Most crude Helium tapped from natural gas reserves is only around 50% pure, so other gases must be separated through a scrubbing process. There is a significant amount of Nitrogen in crude Helium, as well as methane gases that must be removed. Cryogenic separation units compress the crude Helium, cooling the gases at subzero temperatures until they are liquified. Once liquified, the Nitrogen and methane gases are drained.

It’s funny cause I have been following Natural Gas for sometime, and a lot in recent times due to the big pop in it. But just never came across the Helium connection.

Either way, Helium is an interesting element to follow because there are some who think a supply and demand issue is arising. Let me share this with you from Rocky Mountain Air:

The BLM Helium reserve is located in the Texas panhandle, stretching through Oklahoma and Kansas. While the reserves have taken millions of years of radioactive decay to cultivate, the BLM has taken nearly 100 years to deplete the supply. It was established in 1925 and is expected to run out by 2025. However, the BLM has until September 2021 to sell all of its federally owned assets, which includes plant facilities, crude Helium pipelines, gas wells, maintenance stations and storage systems. According to gasworld, these assets will be sold in auctions or sealed bids to public or private parties. During the transition, the plant will at least be shut down temporarily, greatly affecting the Helium market across the world.

With the discovery of the deposit in Tanzania, there is hope that the Helium market will be sustainable for some time after the BLM goes offline, or eventually runs out. Even so, deposits of this non-renewable resource will continue to be depleted rapidly if conservation and recycling efforts are not made. Large companies like General Electric have been innovating Helium recycling systems for MRI machines. The medical, automotive, aerospace, balloon and other industries that rely on Helium will be negatively affected if the Helium market continues to fall at such a rapid pace.

The United States produces about 75% of the world’s helium, with more than 40% of the helium used annually by the US found in the Federal Helium Reserve in Amarillo, Texas. The rest of the world’s supply comes from Qatar.

1. Heliox mixtures in respiratory treatments for asthma, bronchitis and other lung deficiencies

9. Detecting leaks, such as in the hull of a ship

In this Market Moment I will take a look at the technical set ups of four Helium companies.

Imperial Helium Corp. is focused on the exploration and development of helium assets in North America, initially through the anticipated commercialization of its Steveville, Alberta helium discovery. Imperial Helium has developed a proprietary database of existing helium bearing well bores that are being evaluated for acquisition. Our targeting is focused on wells with contingent concentrations of helium and existing infrastructure. The analytical geoscience and engineering approach undertaken to source these helium opportunities eliminates the fiscal risk of finding uneconomic concentrations of helium in the exploration process. 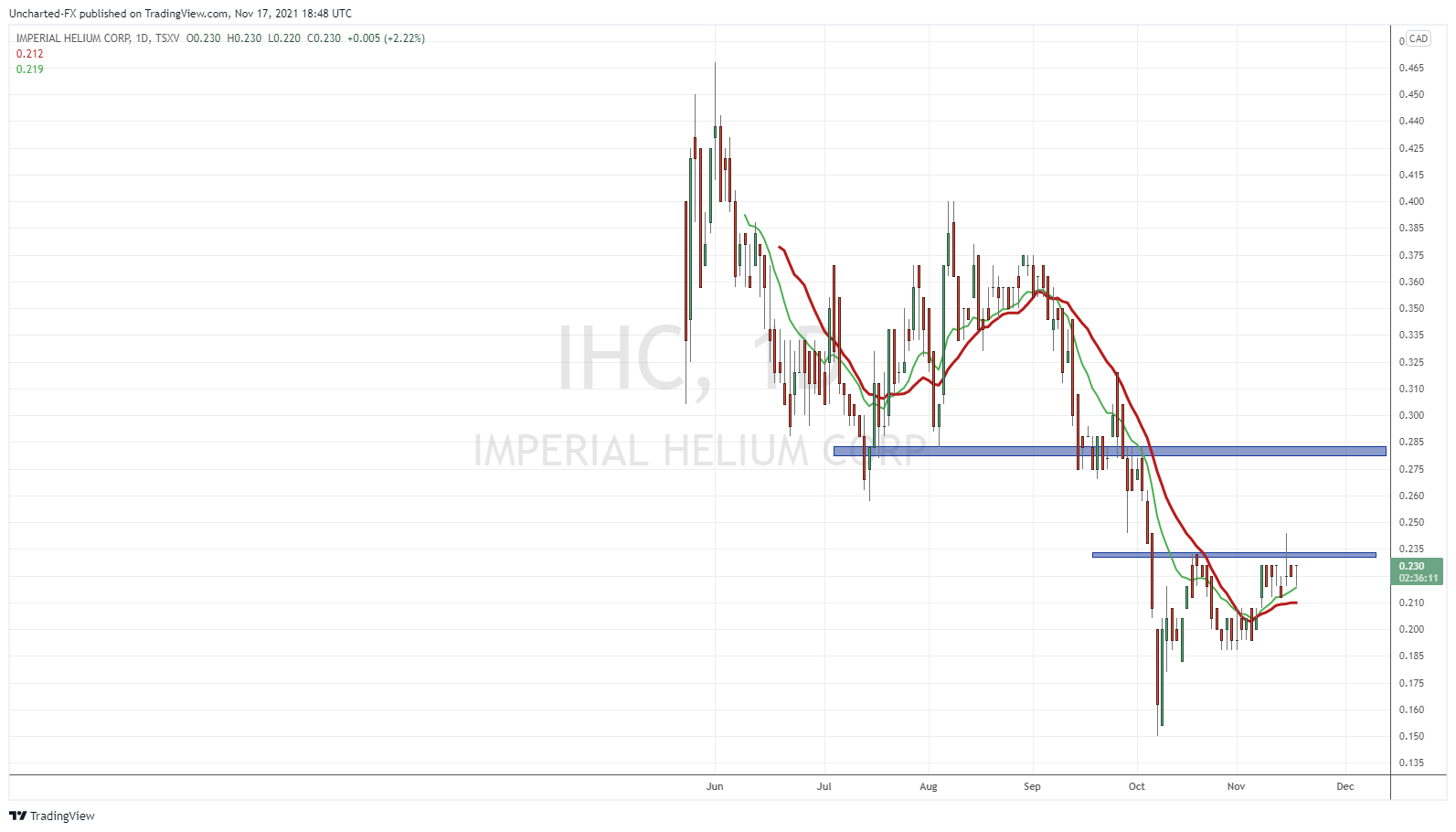 Chart wise, simple and sweet. We have seen this pattern in Mineworx and Palladium recently. It looks like a cup and handle pattern. The cup isn’t too broad, but the structure is what matters here. Crossing over my moving averages was a good sign, but what we need is a break and close above the $0.235 zone. We tried to do this on November 15th, but to no avail. Price is remaining strong here, so a push higher could be in the cards. By the way, the volume on the 15th was 536,927 shares traded.

Royal Helium Ltd. engages in the exploration and evaluation of helium properties. Royal controls approximately 1,000,000 acres of prospective helium land in south-west and south-east Saskatchewan. All of Royals’ lands are in close vicinity to highways, roads, cities and importantly, close to existing oil and gas infrastructure, with a significant portion of its land near existing helium producing locations.

Recent news details Royal Helium commences completion program for the Nazare Zone at Climax-4 in Southwestern Saskatchewan. The program is designed to test reservoir production with enhanced gas flow and recovery rates from the large Nazare pay zone. The program is anticipated to run for 3-4 weeks followed by the completion of a resource estimation. Production and processing plans as well as offtake arrangements are ongoing and will incorporate the data from this completion program and will be announced as each is finalized. 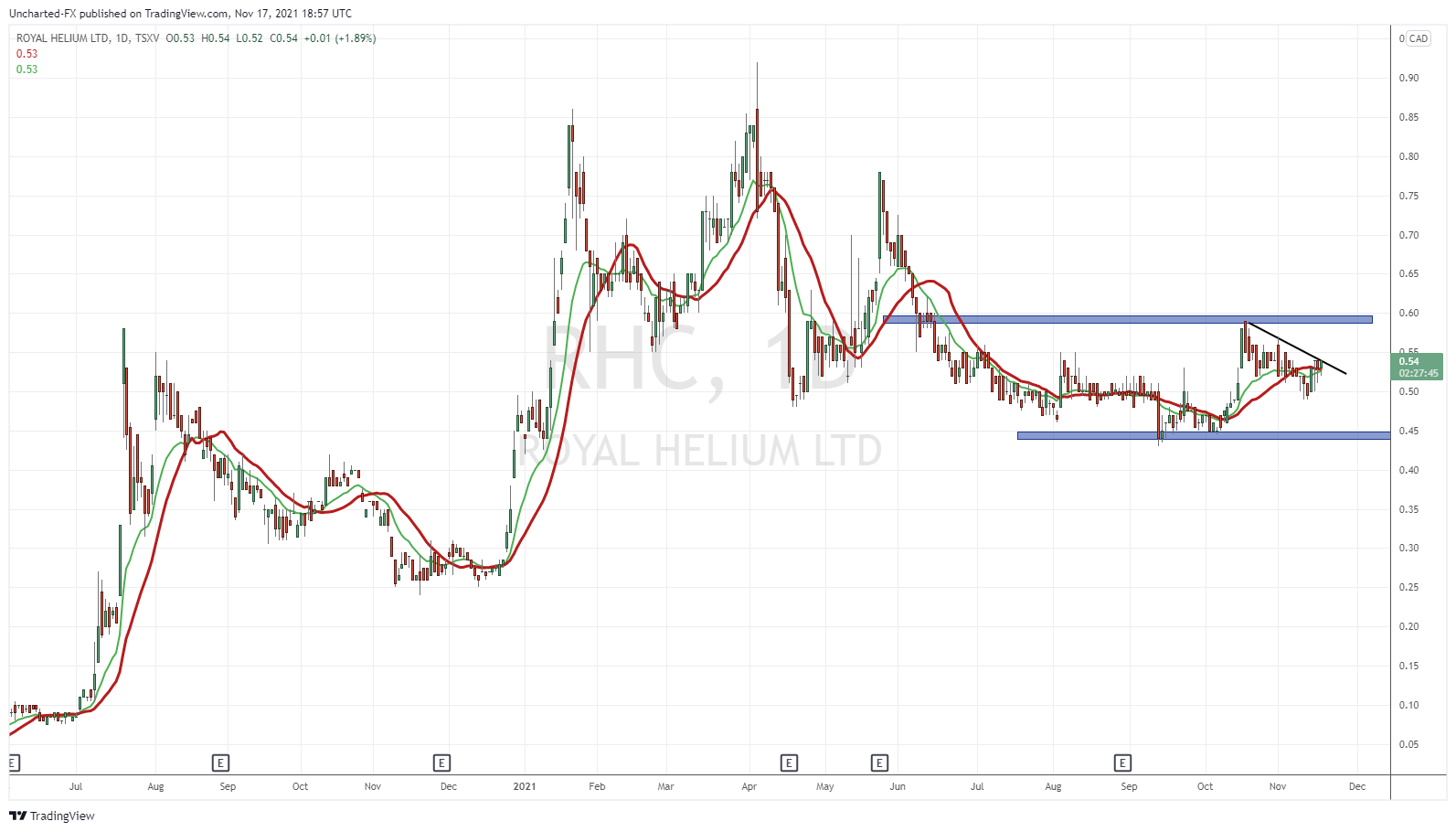 Now here’s a pretty nice chart set up. I loved the fact we began basing and found support at $0.45. More importantly, we broke above $0.50 and have pulled back to retest this breakout zone. The $0.50 zone is very important for under $1.00 stocks. We saw buyers step in on November 12th 2021 on the retest of $0.50 with decent volume. Bit of a mini flag pattern here too. I like what I see. A break above $0.60 takes us into another momentum rally with price targets above $0.75.

First Helium is a helium exploration and development company operating in the Worsley area of Alberta, Canada. It was founded to capitalize on the untapped potential of significant helium resources in Western Canada, in response to the shifting supply dynamics of the global marketplace. The Company is positioned to become a leading North American producer, leveraging a de-risked strategy to achieve near-term cash flow. The Company has recently raised approx. $12 mm, which it will deploy primarily to the development of its Worsley Helium Project, anchored by its successful helium discovery well. 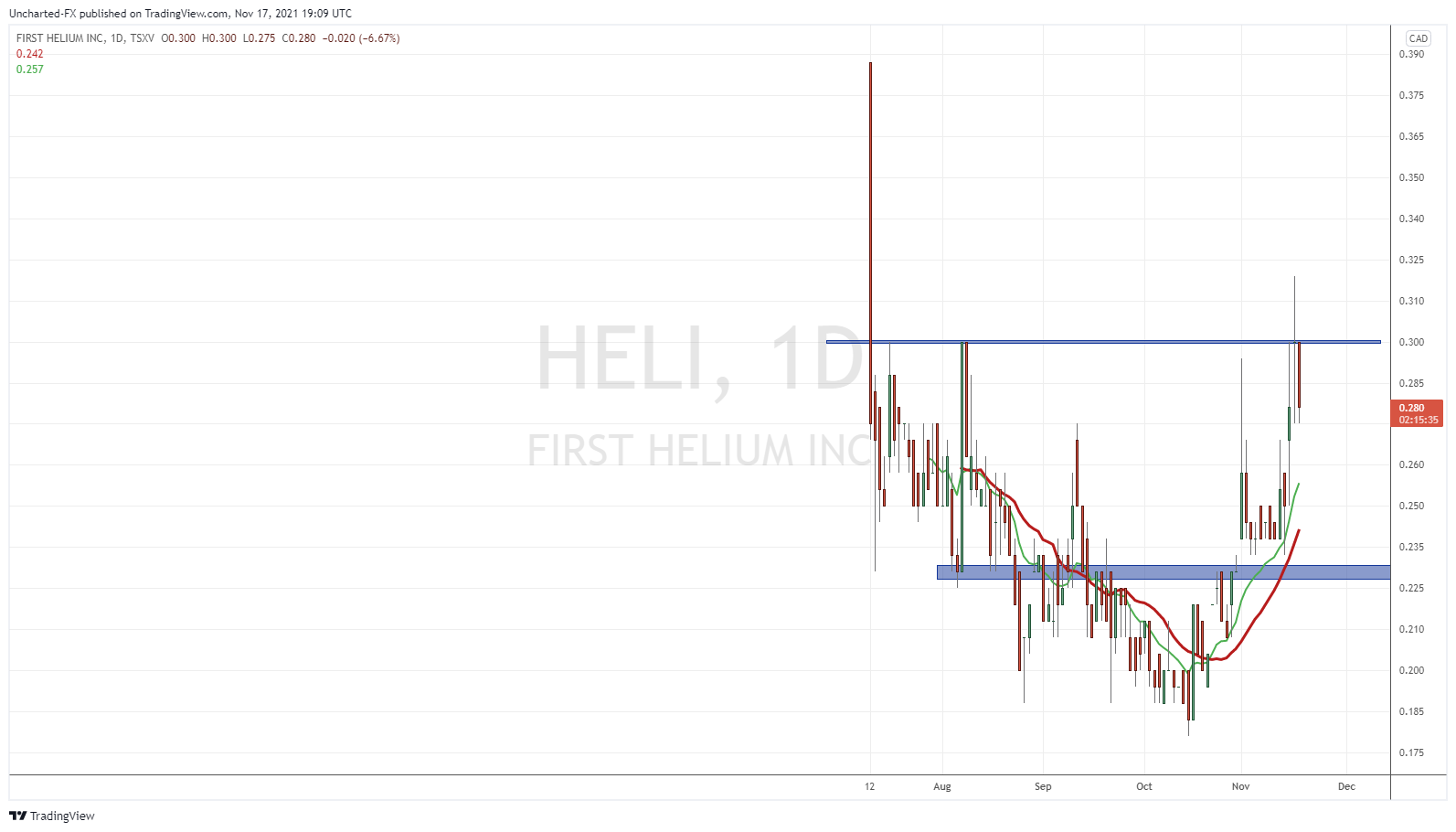 Now this is a chart that looks different than the previous two. Readers of my work would have seen a trigger on the breakout above $0.225. Technically, this new uptrend remains intact above this price level. A close above $0.30 gets this stock looking very interesting. It would set us up for a return back to previous record highs and higher!

Global Helium Corp. engages in the exploration, acquisition, development, and production of helium in North America and internationally. Its flagship project comprises three helium exploration permits covering an area of 85,000 hectares located in the helium fairway in southern Saskatchewan. The company was formerly known as First Helium Corp. and changed its name to Global Helium Corp. in December 2020. Global Helium is developing helium resource assets to meet the growing demands of the medical industry, government and research communities. Helium is a resource with demonstrated supply shortages and significant demand growth. A “helium supply crunch” is underway to explore for new North American sources because of significant underinvestment over decades. 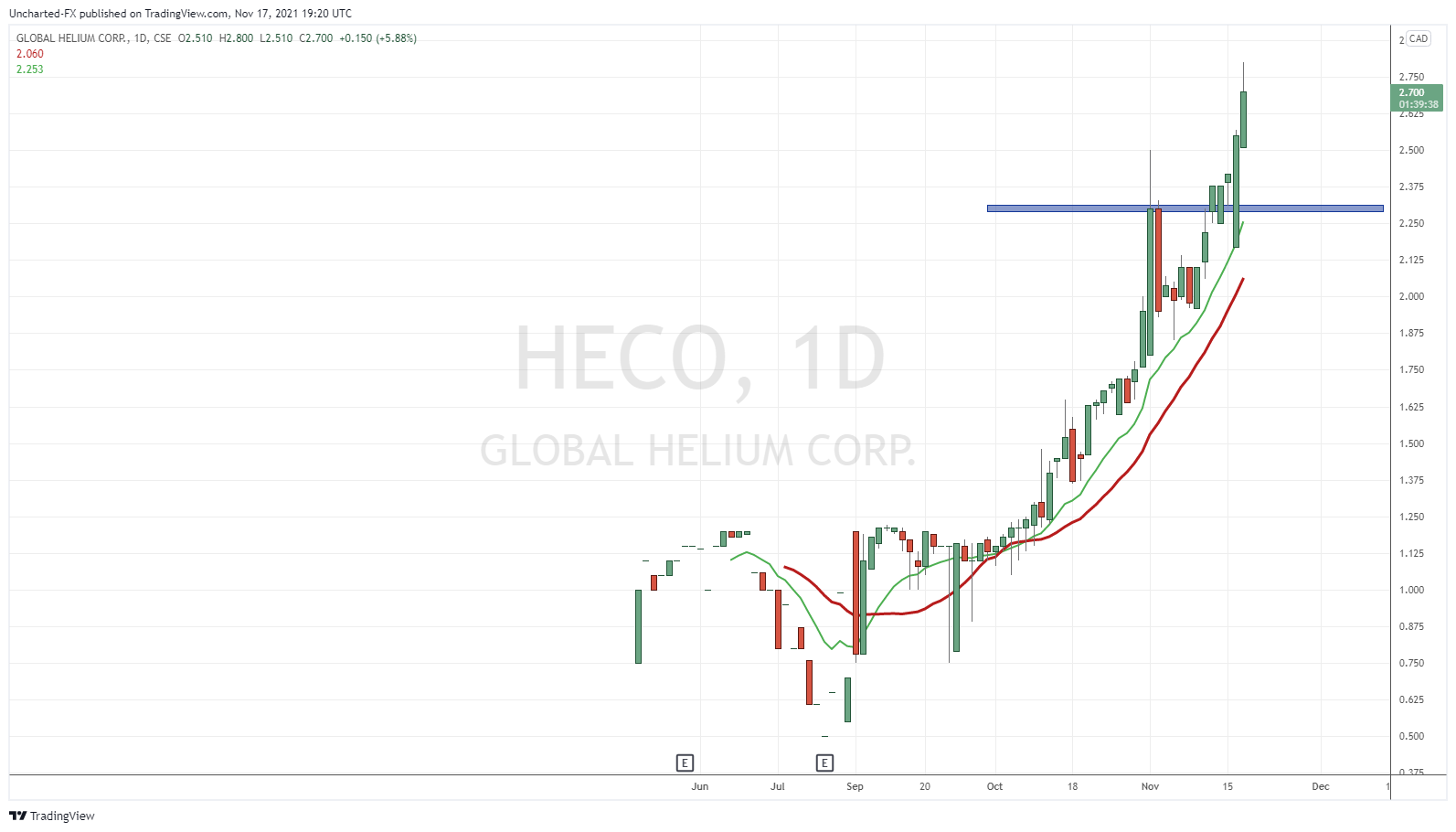 The final chart is very different. The stock is ripping higher. This is just me, but I do not like chasing moves, but you cannot deny the uptrend. Pullbacks are opportunities to buy. I like the support at $2.30, what was once resistance now becomes new support. Alternatively, we can play it on the pullbacks to my moving averages. If we remain above the moving averages, the stock is bullish.