US Dollar Hints at a Risk Off Environment

Today’s Market Moment will focus on the chart of the DXY, or the US Dollar. US Stock Markets and Bond Markets are closed today in lieu of Memorial Day, so it gives us a chance to digest everything that happened last week, and formulate a plan of attack for this week.

The big theme going forward still remains the meme/retail crowd. AMC stock got short squeezed, but we will keep our eyes on GME, BB, SPCE, RKT, PETS, TR and NAKD for more squeeze action. As my readers know, the action of the Russell 2000 will help determine whether this retail money is leaving crypto’s and coming back to Stocks and small caps.

On the macro side, the story is still inflation. The core personal consumption expenditure (PCE) index rose by 3.1% year over year in April 2021. A few things to note from the CNBC coverage:

Remember the Fed’s 2% inflation target. Apparently everyone sees inflation except the Fed. The Fed calls this transitory inflation and believes things will return to normal after consumers transition from spending on goods to services. Therefore, there will be no rate hike or change in monetary policy until the Fed sees regular 2% inflation targets met.

Reader’s of Market Moment know the dilemma: we are in a situation where people have more money, and are now competing for the same number of goods and services. Government money did not go to increase productivity. I was listening to a George Gammon and Jim Rogers interview and they mentioned the same thing. The situation is exacerbated because a lot of people have been making money trading stocks and crypto’s. They have made more money and many of them do not want to go back to work.

Inflation is coming, and is already here. Two of my regular monthly purchases are vitamins and fresh juices. I have always paid $24.95 for my bottle of vitamins. Just last month prices rose to $34.95. Freshly squeezed juice from Jugo Juice also went up to $9.95 from $7.95.

With all the craziness, many are calling for a stock market top and crash. The only thing is that money will keep flowing to stock markets because they know it is one of the best way to return yield to beat inflation. On top of this, many investors/traders know the Fed really cannot raise interest rates due to all the debt that is out there. Some even say the Fed’s real fear is a ‘taper tantrum’. Essentially stock markets selling off big time if the Fed raises interest rates. This is all buoyed by cheap money and low interest rates.

My strength lies in the Technicals and market structure. For over a year, I have shown the power of this market structure here on Market Moment, and also on Equity Guru’s Discord Trading Room. It works and has a high probability of success. Some even say it is like using a crystal ball. All I am doing is following price action and market structure. 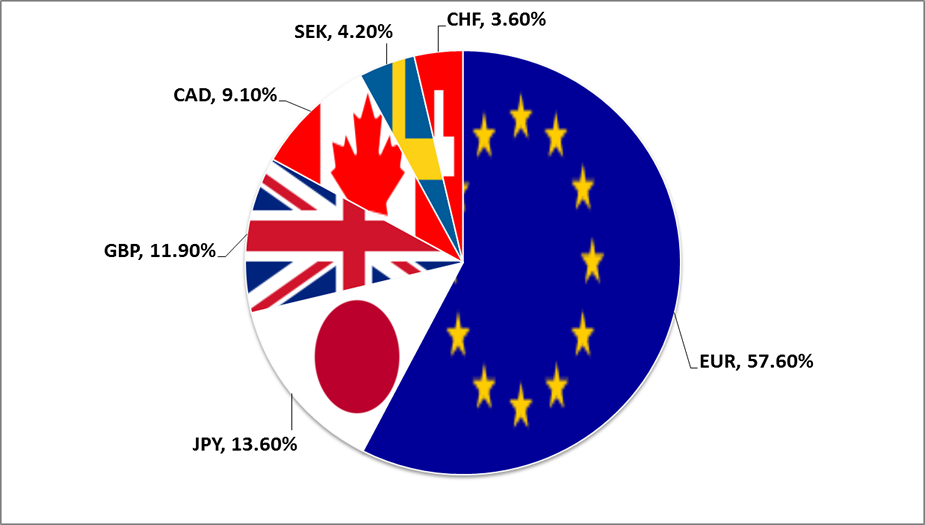 We all know nothing moves down forever nor moves up forever (except Vancouver Real Estate??). The US Dollar has gotten beat up so much, that many traders are eyeing a potential relief rally. The tricky thing is the state of central bank policy. Every central bank is attempting to weaken their currency. Either to boost exports, or to keep assets propped. In most cases both of these are achieved. The US Dollar being the reserve currency means the Federal Reserve has a better chance of accomplishing this.

The currency war will heat up once say the European Central Bank decides to intervene and cut rates even lower into the negative as a way to weaken the Euro. Other central banks may do the same thing.

Back to the US Dollar. Some lament that the Dollar is still seen as a safe haven currency. People tend to run into the Dollar when there is some fear in the Markets and the world. The Japanese Yen also still remains a safe haven. Some on Wall Street prefer it better than the Dollar. I have heard stories of wealthy traders never leaving their homes without Japanese Yen. The Swiss Franc was seen as a safe haven, but after the intervention of the Swiss National Bank back in 2015 where they removed the 1.20 support on the EURCHF, it has fallen from that status.

Just looking at the chart, there is a possibility the US Dollar gets a bid. 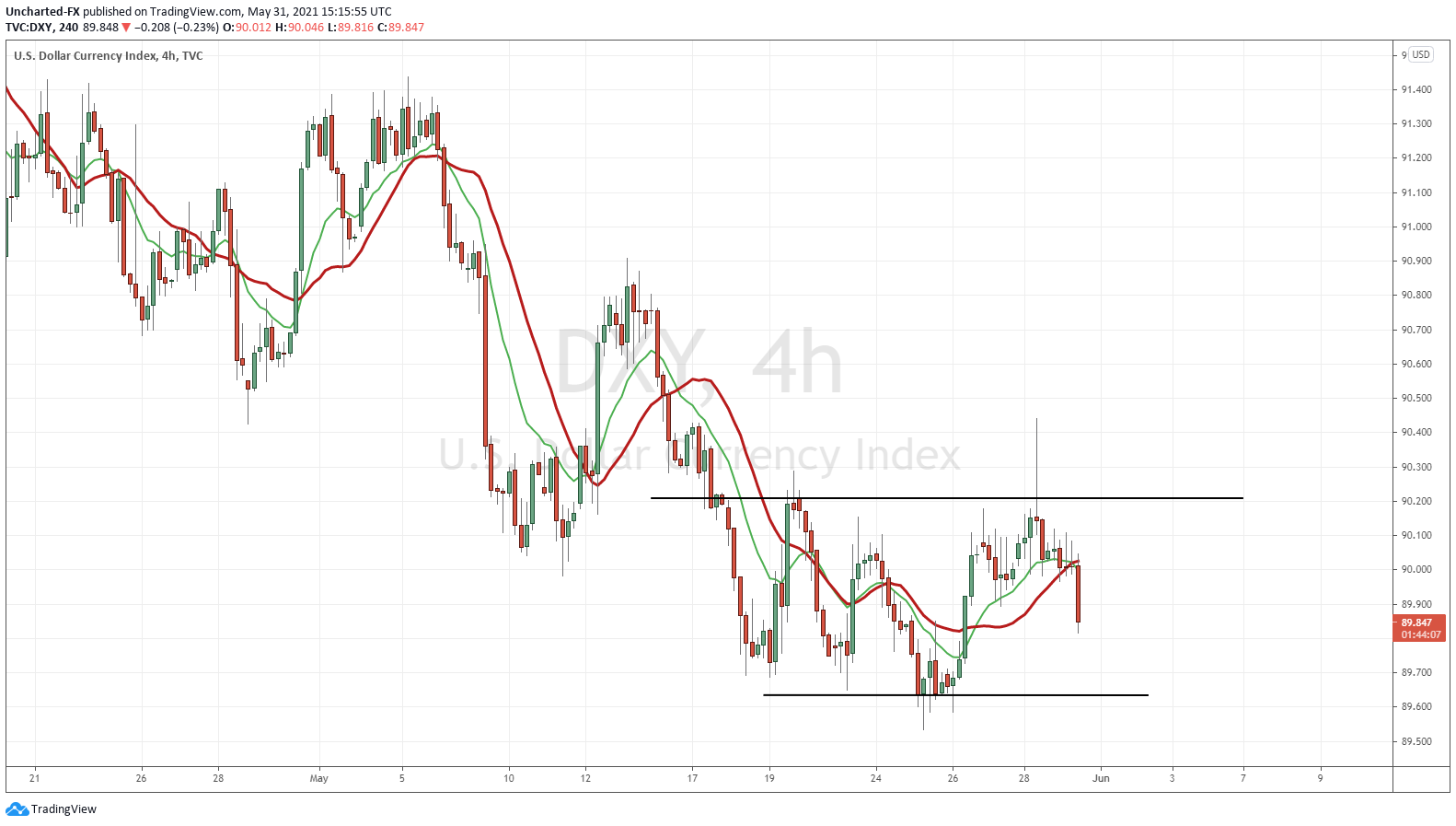 DXY Chart on the 4 Hour Chart

The 4 hour chart of the DXY is displaying a potential reversal pattern which we call the inverse head and shoulders pattern. But there is a major missing component before we can confirm this. We need price to break and close above the 90.20 zone. 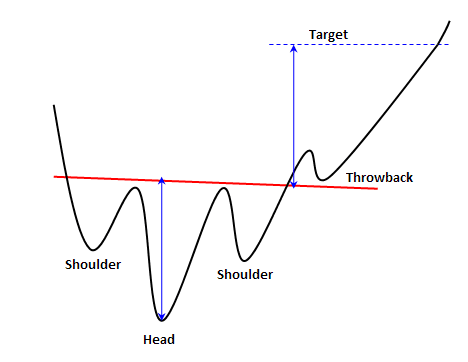 Two things to note: firstly the current candle is really weak. Keep in mind there is not much liquidity due to the US holiday. If the US Dollar does decline, that is fine, we can go long stock markets and Gold.

Secondly, notice how it appeared price was going to break above 90.20 only for sellers to drive prices below our zone. The long wick indicates a trap. This is why members of our discord group always see me type out: await for the candle CLOSE. This is the trigger which confirms the breakout or the pattern. We have yet to see this on the Dollar.

I mention the DXY today because of the action we are also seeing in the bond markets. A risk off environment could be in the cards.

What do I mean by a risk off and risk on environment I hear you say?

A risk on environment is when money flows into risky assets. Essentially flowing into stock markets.

A risk off environment is the opposite. Money flows out of risky assets like stocks, and flows into safety. Mainly Bonds and the US Dollar. 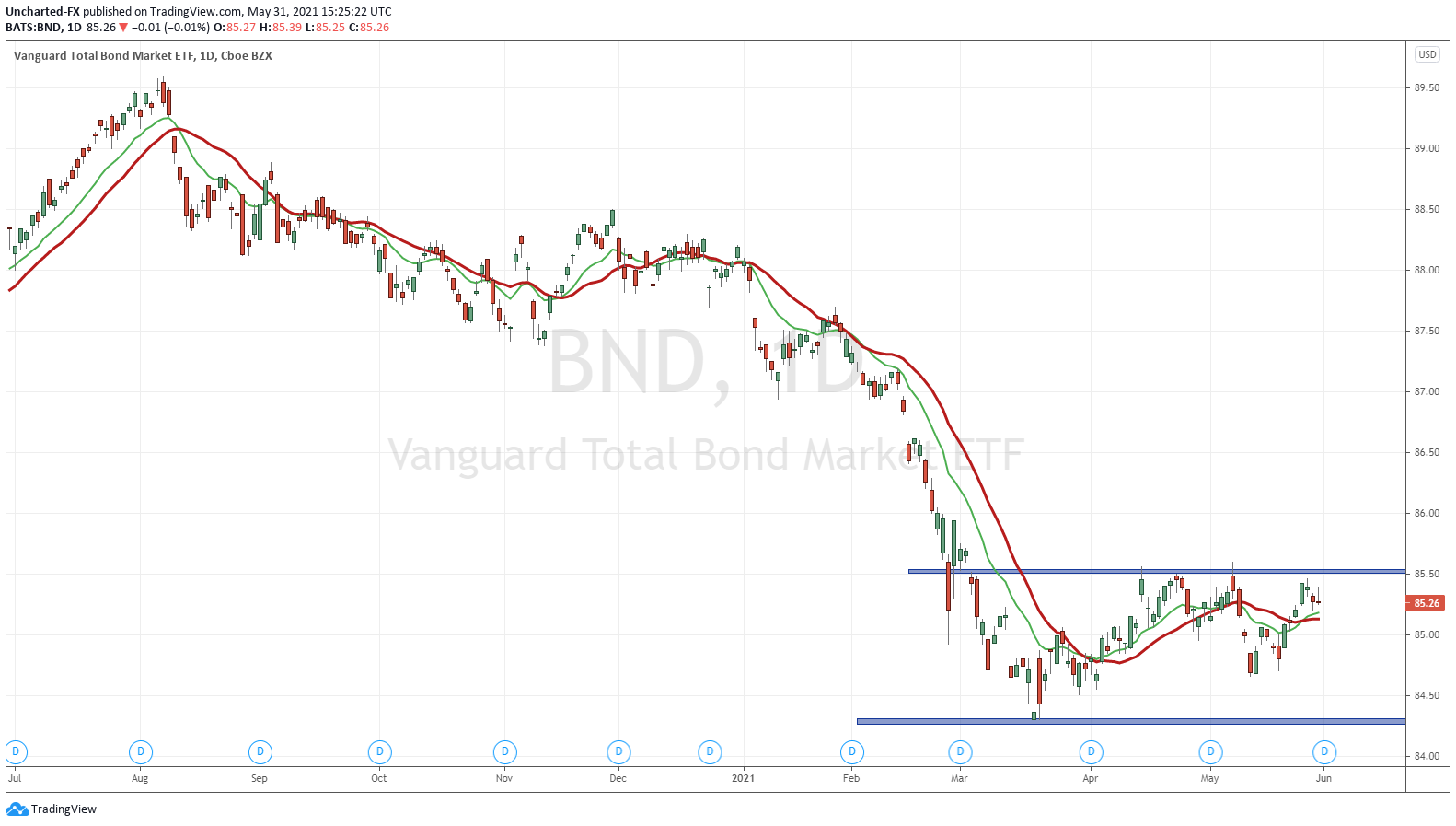 Are Bonds Basing and Ready for a Move Higher?

BND is showing some basing, and a break above $85.50 would signal money flowing into bonds. A risk off move. 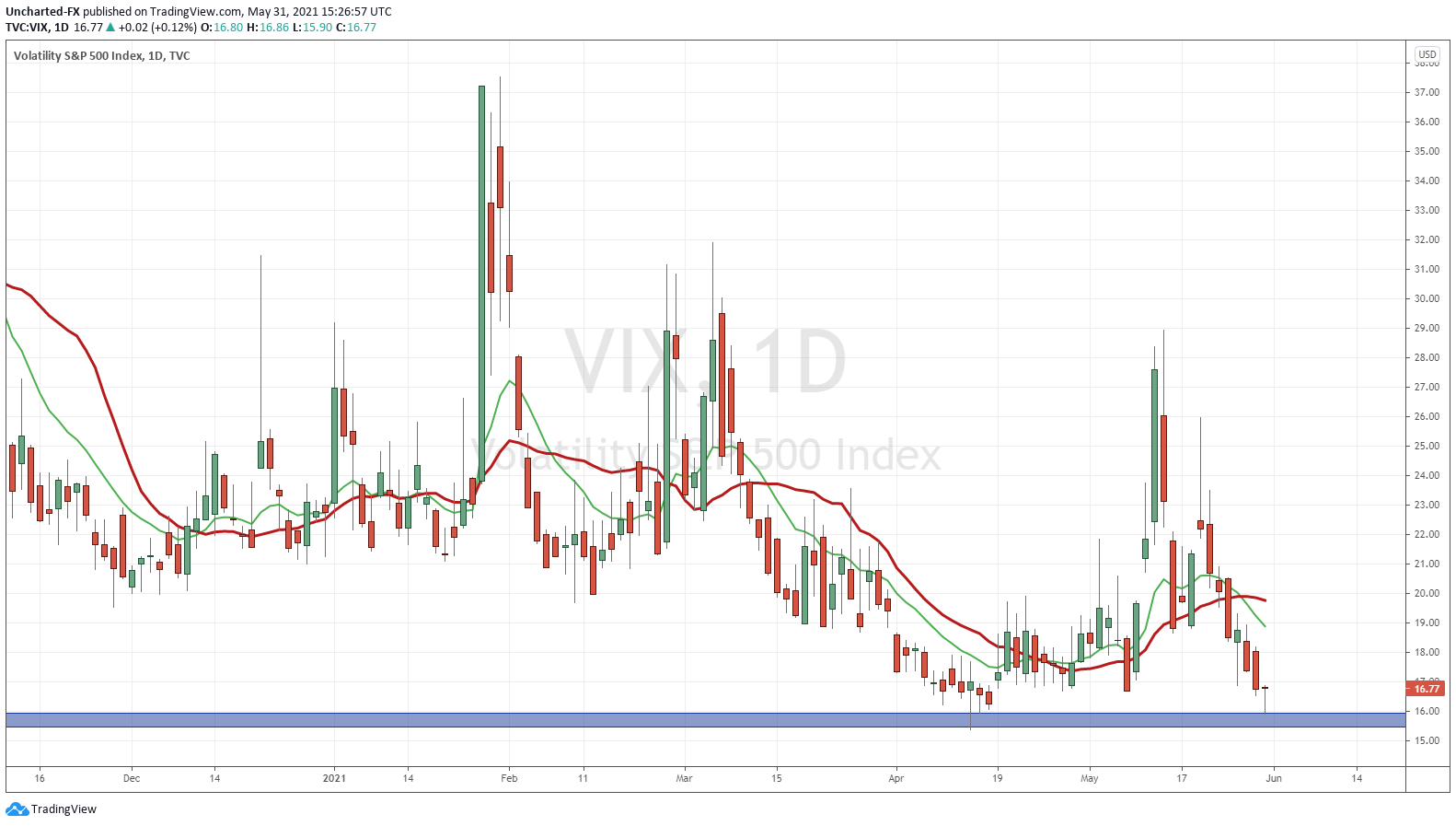 The VIX could also be Signaling a Risk Off Environment

The VIX, or the Volatility Index, is used to gauge fear in the markets. If markets are fearful, money will flow into risk off assets. The VIX could be finding some support here at 16 and can bounce higher (indicating some fear) from this level.

So there you have it. The DXY, Bonds, and the VIX are providing some signals that a risk off move might be in the near future. If the breakouts we are looking for do not occur, then stock markets will continue higher.

This is now where some speculation comes in. When I see prices of risk off assets basing like this, we tend to see some sort of catalyst. Obviously it would have to be some bad news or a major surprise. Something that causes money to sell stocks and run into safety. Maybe this comes from a major geopolitical event. Perhaps some bad news to do with the pandemic. Could even be inflation headlines or Fed President’s spooking the markets as the market prices in rate hikes sooner than later.

On the economic calendar front we have some macro events pertaining to the US Dollar. We have US ISM Manufacturing PMI (Purchasing Manager’s Index) on Wednesday, US ISM Services PMI on Thursday so we have some inflation data for the week. We then end the week with US Non-Farm Payrolls (NFP) or US employment on Friday. NFP used to be a US Dollar moving event, but after the pandemic it sort of lost its importance. However, with the economy re-opening up, NFP might start being relevant again in terms of gauging recovery and economic strength.