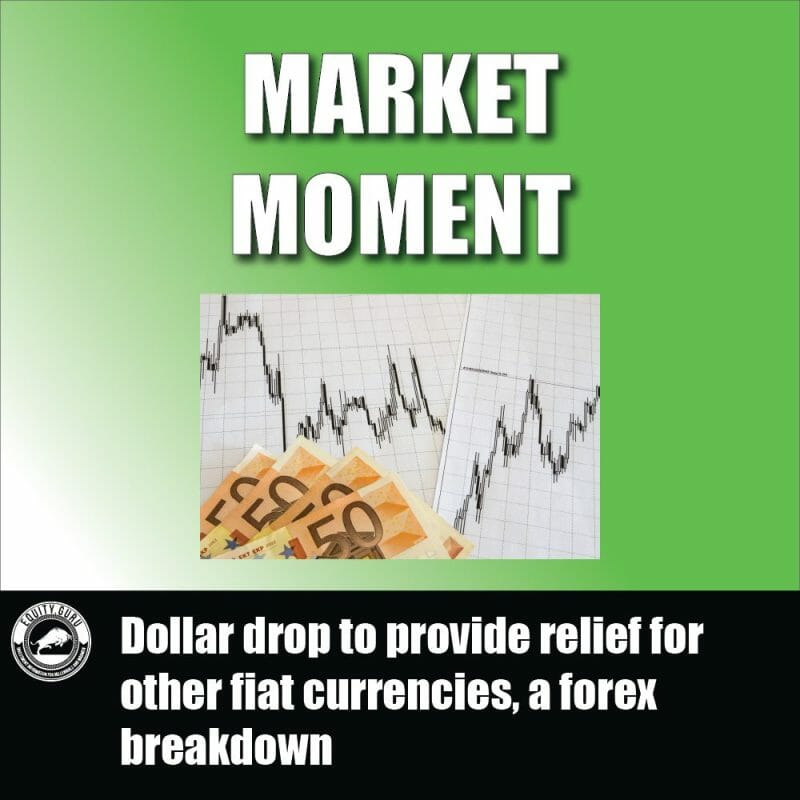 One of the most important charts to be watching for the next few months is going to be the US Dollar Index, also known as the DXY. This index measures the Dollar against a basket of other fiat currencies. Here’s the breakdown of the composition:

Some of you may know that my main focus in trading is the forex market. Forex stands for foreign exchange, or simply, the currency markets.

If you are someone who believes in monetary inflation, meaning that inflation is rising because the purchasing power of the currency is falling, then you MUST watch the currency markets. You have already heard about the big moves in the Turkish Lira, and most recently the Russian Ruble. The Lira is still weak, while the Russian Ruble had a spectacular reversal now becoming the best performing currency of the year. Currency markets can give you an edge when it comes to geopolitics, monetary policy, and just gives you a better understanding of economics and what could be coming next.

In recent months, the US Dollar has been making a large move higher. This has raised some concerns especially among emerging market countries with a large dollar denominated debt. Why? Because these nations will need to pay back the debt in stronger dollars. Emerging markets borrowing dollars (like Turkey) was quite popular because emerging market interest rates tend to be very high. US interest rates are much lower, and US dollars are easily available to borrow. Most of these emerging market customers borrowed thinking the Dollar would either weaken or just remain steady. The higher the Dollar moves, the more likely it will cause havoc and break something in an emerging market currency.

With Russia and China looking to undermine the US Dollar as the reserve currency, a stronger Dollar might have some geopolitical ramifications in the future. This is pure speculation, but imagine if the Dollar gets so strong that Western nations come together to beg the US and the Fed to weaken it. We get another Plaza Accord. When the first Plaza Accord took place, the geopolitical chessboard was very different. The USSR was in decline, and Japan, the rising economic power, could not do anything militarily because of Article 9. Maybe this time the Russians and Chinese, along with the BRICS nations, could entice Western nations to join their “fair and multi polar” economic world. Let’s not forget that the Chinese economy is set to surpass America’s sometime in 2030, and it appears like the next major and real growth will occur in Asia.

When it comes to currencies, many people have heard of interest rate differentials. A currency tends to attract more buyers if its interest rate is higher. For example, take a look at the Yen currencies. It has always been the carry trade because Japan has negative interest rates. However in this environment, things get tricky. Everyone is expecting most western central banks to raise interest rates. In a way, most of these rate hikes are already priced in the currency, hence why there is no major move in them when central banks raise rates. The market already expects it.

When it comes to the Dollar, I do not think it is necessarily about a hawkish Fed. I believe all those rate hikes have been priced in. The Dollar, being the reserve currency, has a safe haven status. Money runs into the US Dollar when there is fear and uncertainty. Looking around the current world, you will understand why the Dollar has had a nice rally. If things worsen in Europe and in Asia, then I expect we will see a large amount of foreign money coming into the Dollar.

With stock markets dropping, that money has run into the US Dollar, or cash. We can use the Dollar as a fear and uncertainty gauge, and this is what I am suggesting going forward. Yes, the Fed will obviously move it if they change their monetary policy, but I think the better market to watch for that is the bond market. If we begin to see the US Dollar sell off, it would be positive for stock markets as it shows that the fear is subsiding. 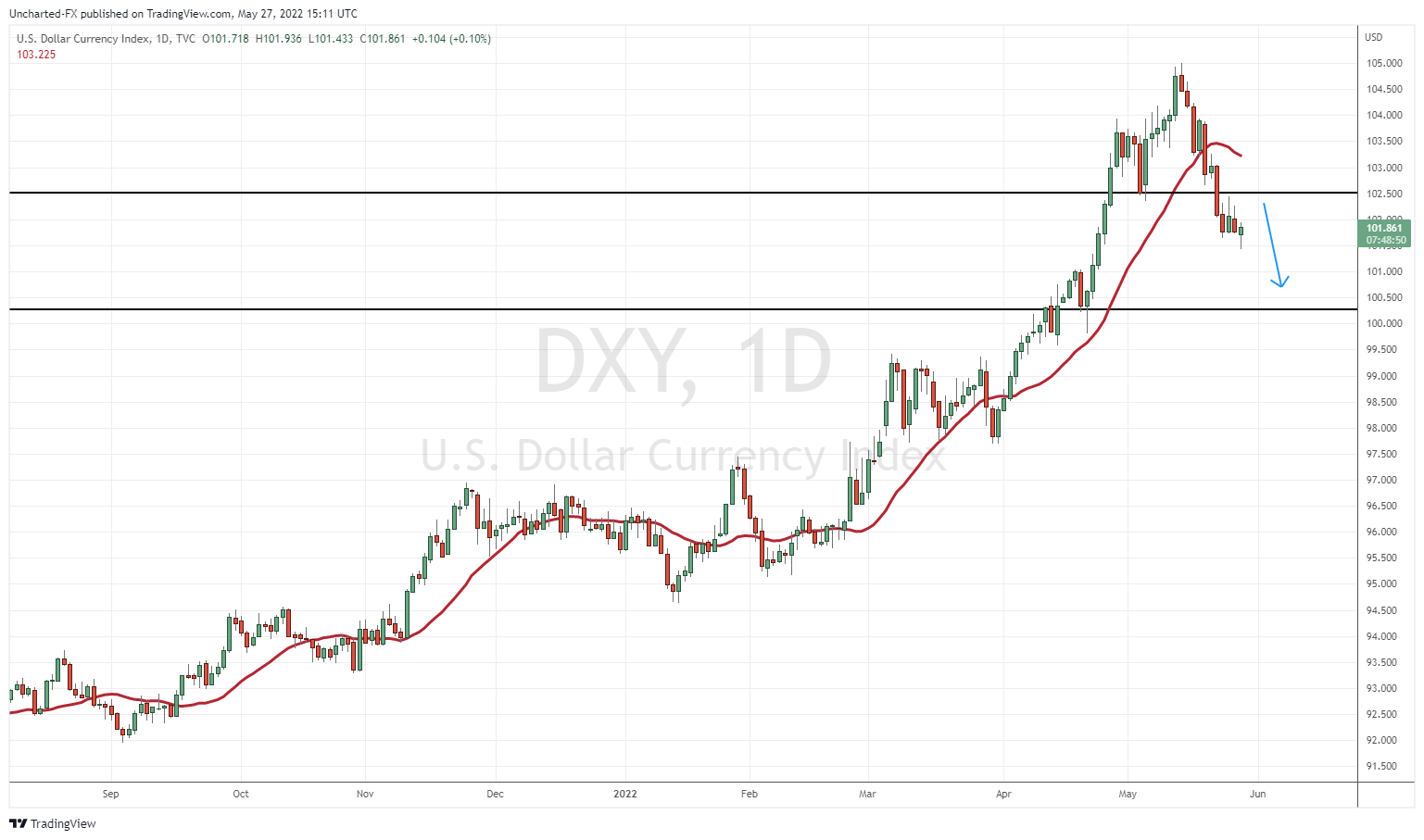 Which brings us to the US Dollar chart. The Dollar broke below a major support level at 102.50. With this breakdown, traders expect another move lower to 100 which is a major psychological number. With this Dollar drop, we have seen the US stock markets beginning to bottom and bounce. 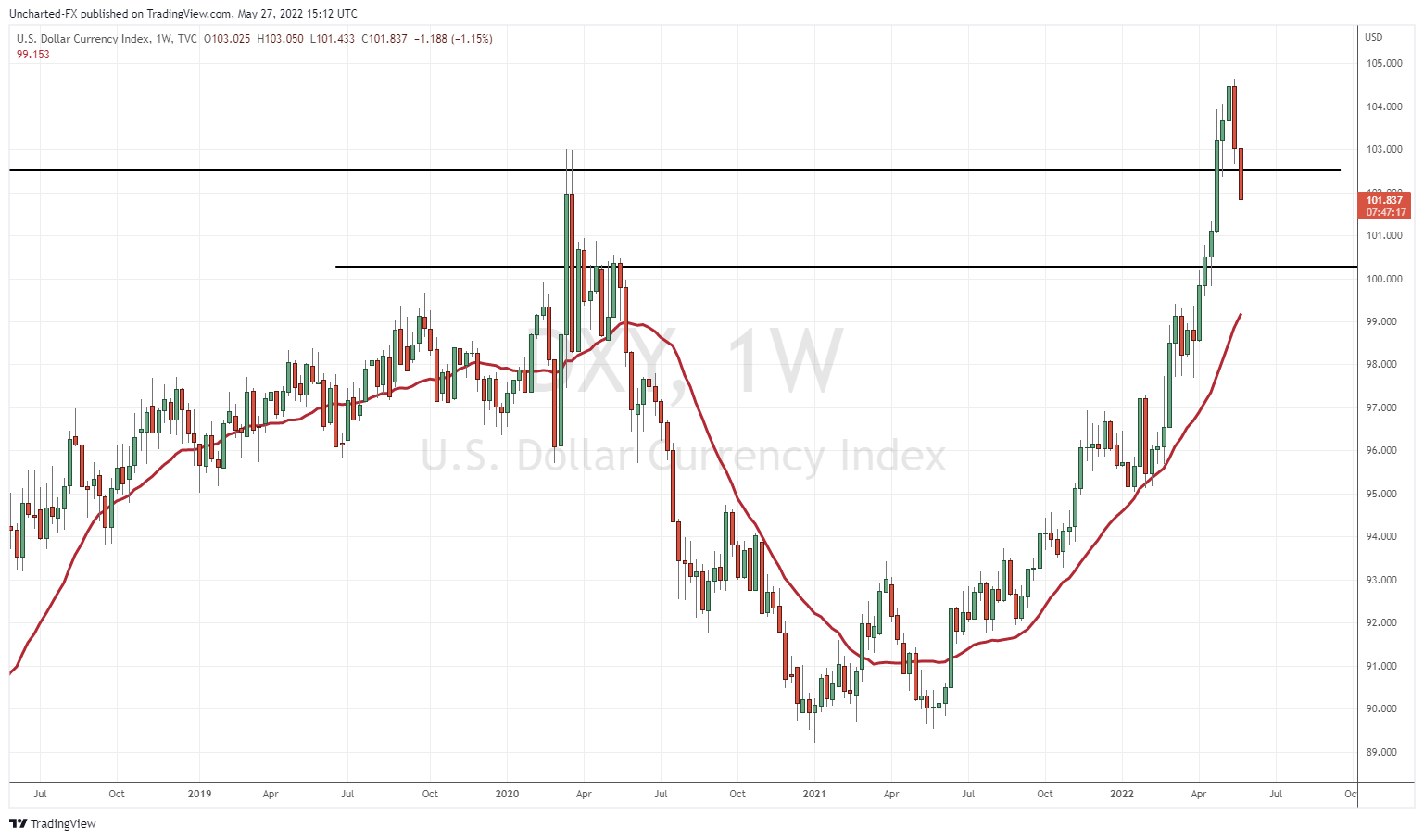 I don’t want to be the guy who spoils this party, but I want you all to keep the US Dollar weekly chart in mind. The trend is still up. Which means that I expect a brief pullback in the US Dollar to provide relief to all the beat up fiat currencies and the stock markets. We could very well bounce at 99 or 100, which would mean the Dollar strength continues and markets continue to drop lower. This could happen because the Fed now has to raise interest rates more to tame inflation, or maybe something geopolitical or something that causes fear.

But as a trader, we can act on this relief rally. For forex traders, there are some very enticing setups, many of which I am already in and in profit. 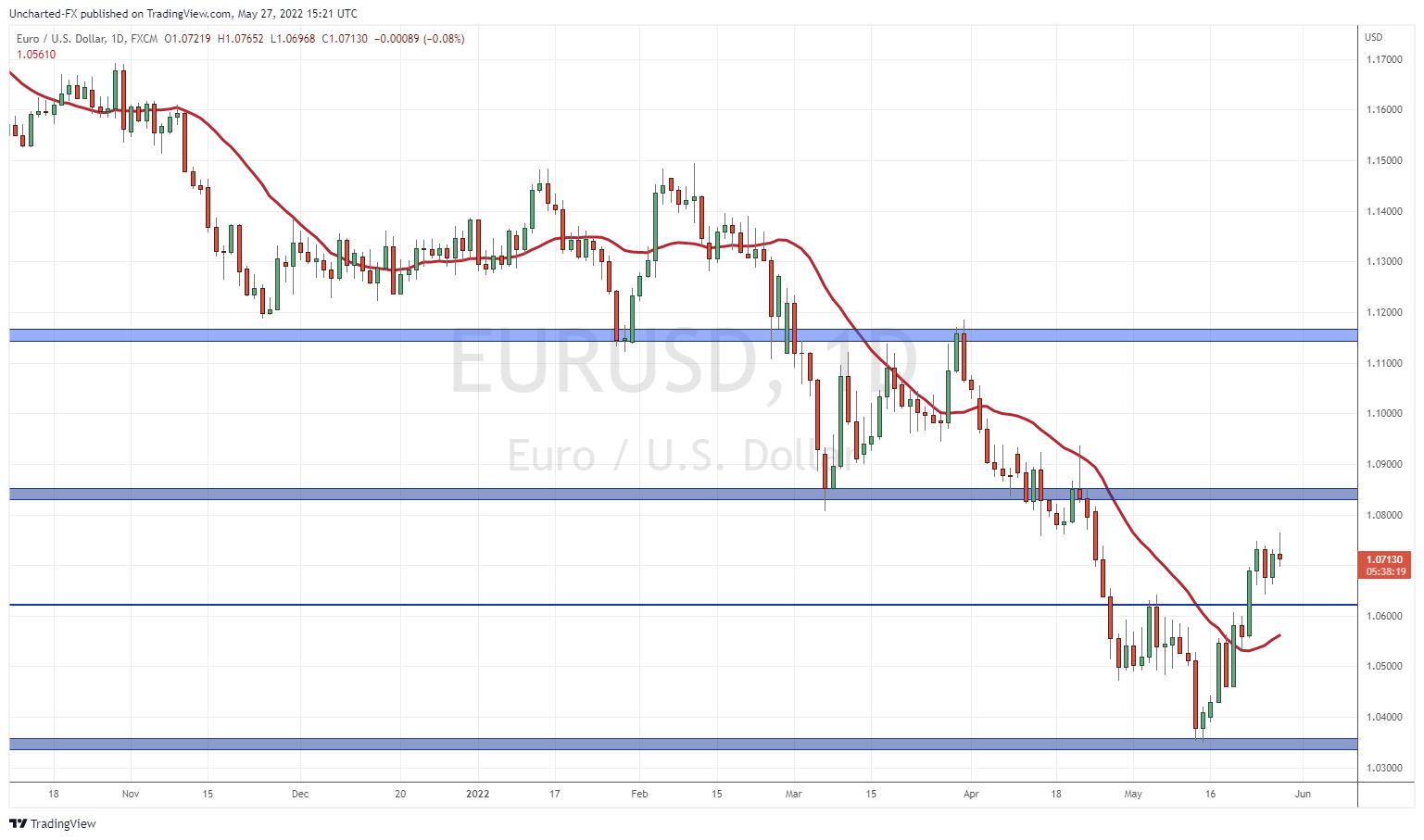 With DXY dropping, we would expect the inverse, the EURUSD, to rise. The Euro has been getting beat down. We have broken below many key support levels, and there was fear that we were going to parity with a break below 1.0350. For weeks, we had a nice bottoming pattern form but we just needed that breakout. We got it with a close above 1.06. If the DXY continues lower, we are going to make a move to 1.0850 and perhaps higher. 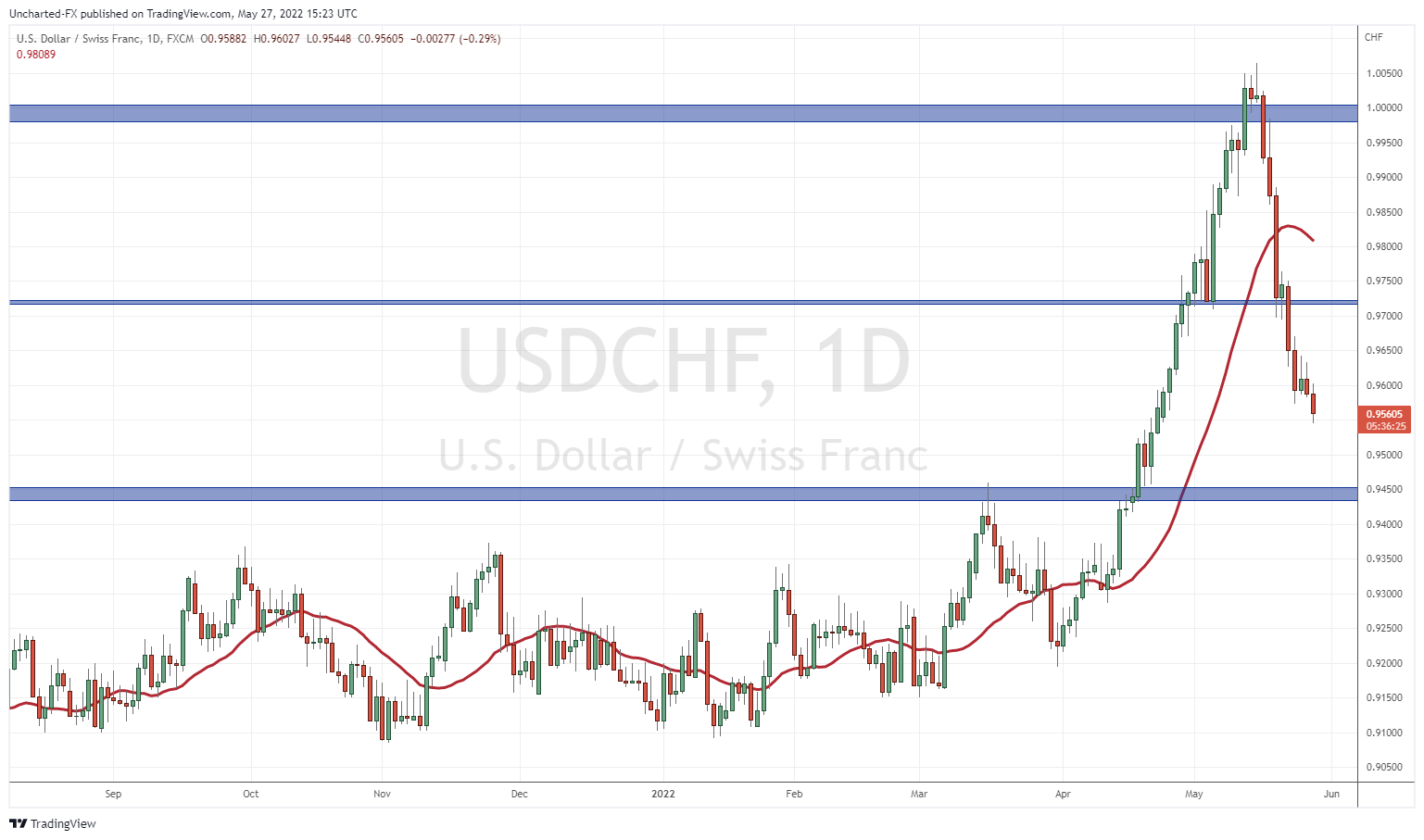 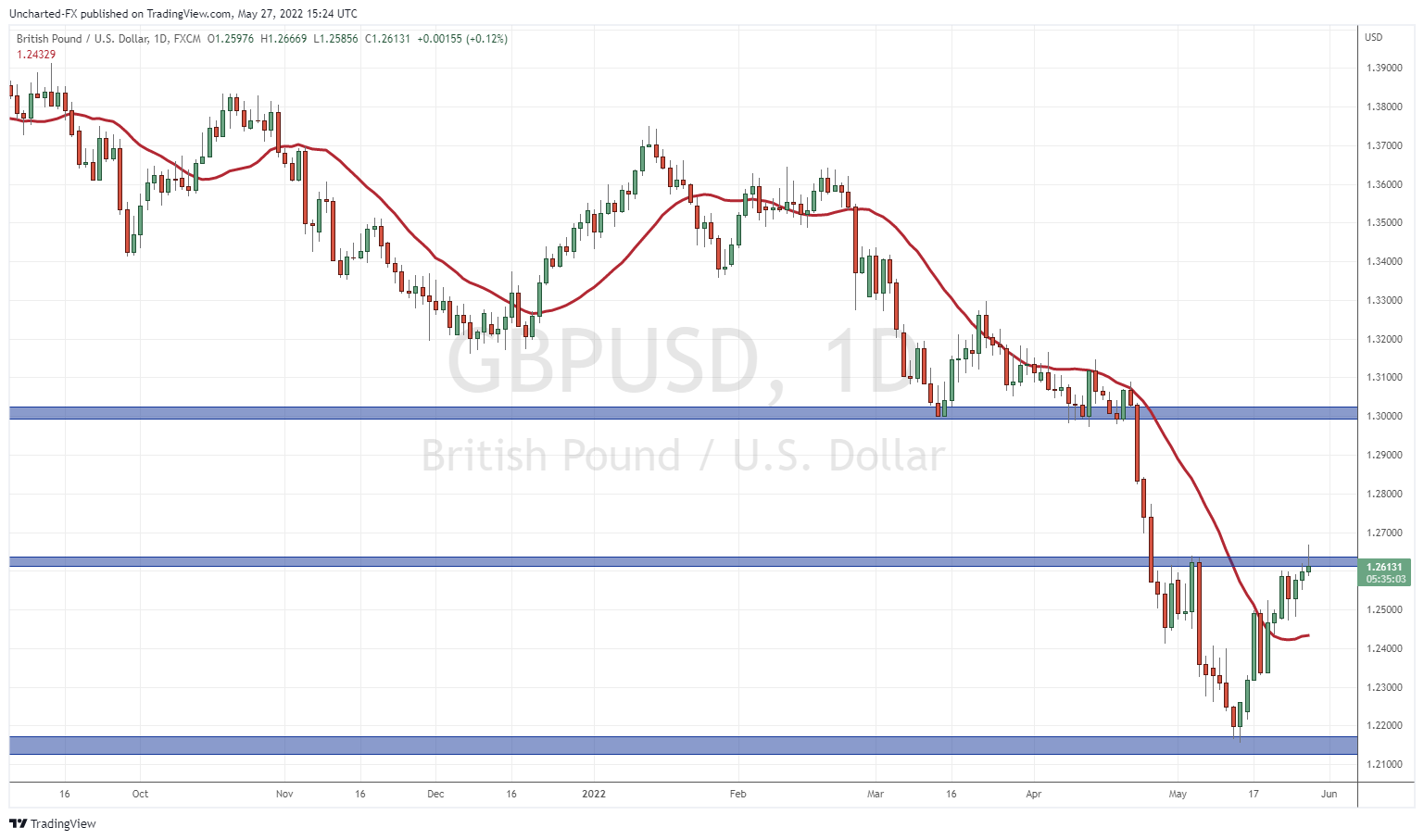 The British Pound also got beat up. Seeing a theme here with the Dollar pairs? After hitting 1.22, the British Pound is on the verge of confirming a breakout pattern. We need a nice and strong daily close above 1.2625. This would mean a weaker dollar and a nice relief rally in the Pound. 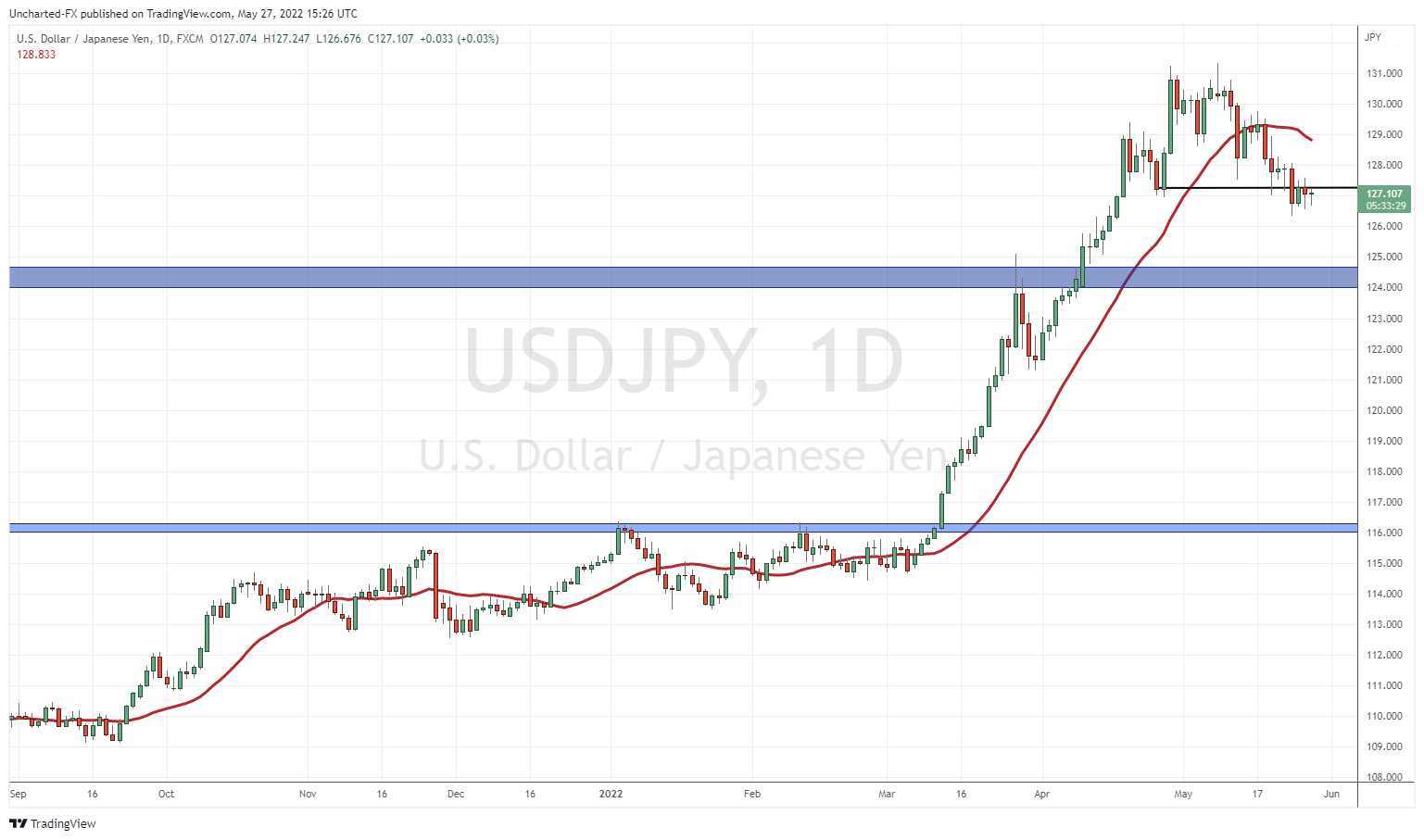 The Japanese Yen movement has also been very crazy. The Yen saw levels against the Dollar that it has not seen since 2002! A very cheap Yen which will entice tourists once the Japanese border opens. The Yen is one to watch because the Bank of Japan is not making any moves to raise interest rates. This means Japanese money will continue to flow overseas to look for yields. Mainly US treasuries, which is why Japan holds the most US foreign debt. China comes in second.

With a weaker Dollar, the USDJPY is showing signs of a reversal. The Yen is due for a relief rally and has broken below a support level at 127.25. 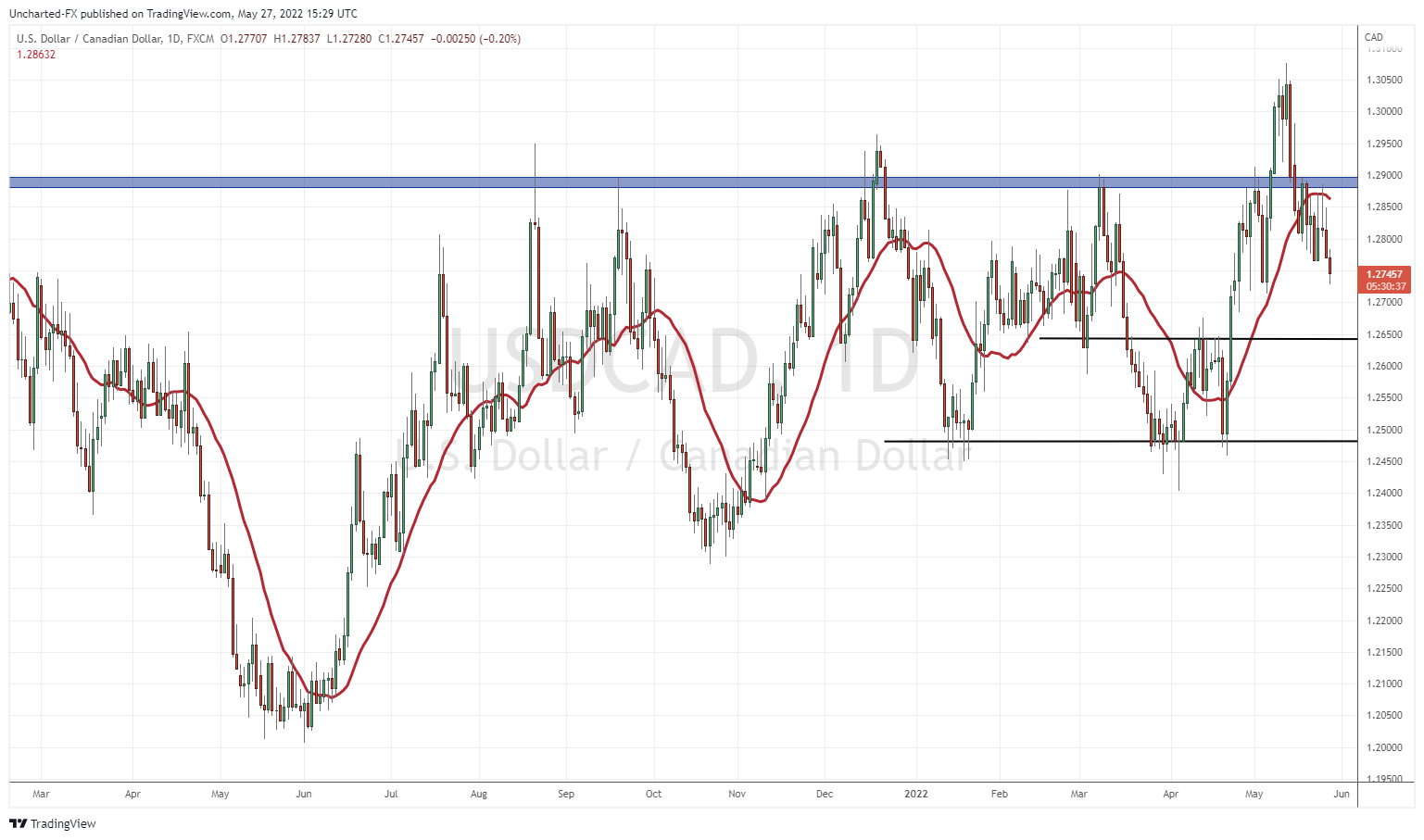 A bit different for us Canadians. The Loonie has largely remained in a range but has had big moves. Not to the extent of other currencies. Why? Oil. The Loonie is positively correlated with oil prices. However, the Dollar still affects what the Loonie does. It looked like we had a breakout above 1.29 and the Loonie was set to crater like the other fiats. Instead, we reversed and closed below 1.29 confirming a false breakdown. Now let’s see if this momentum continues. 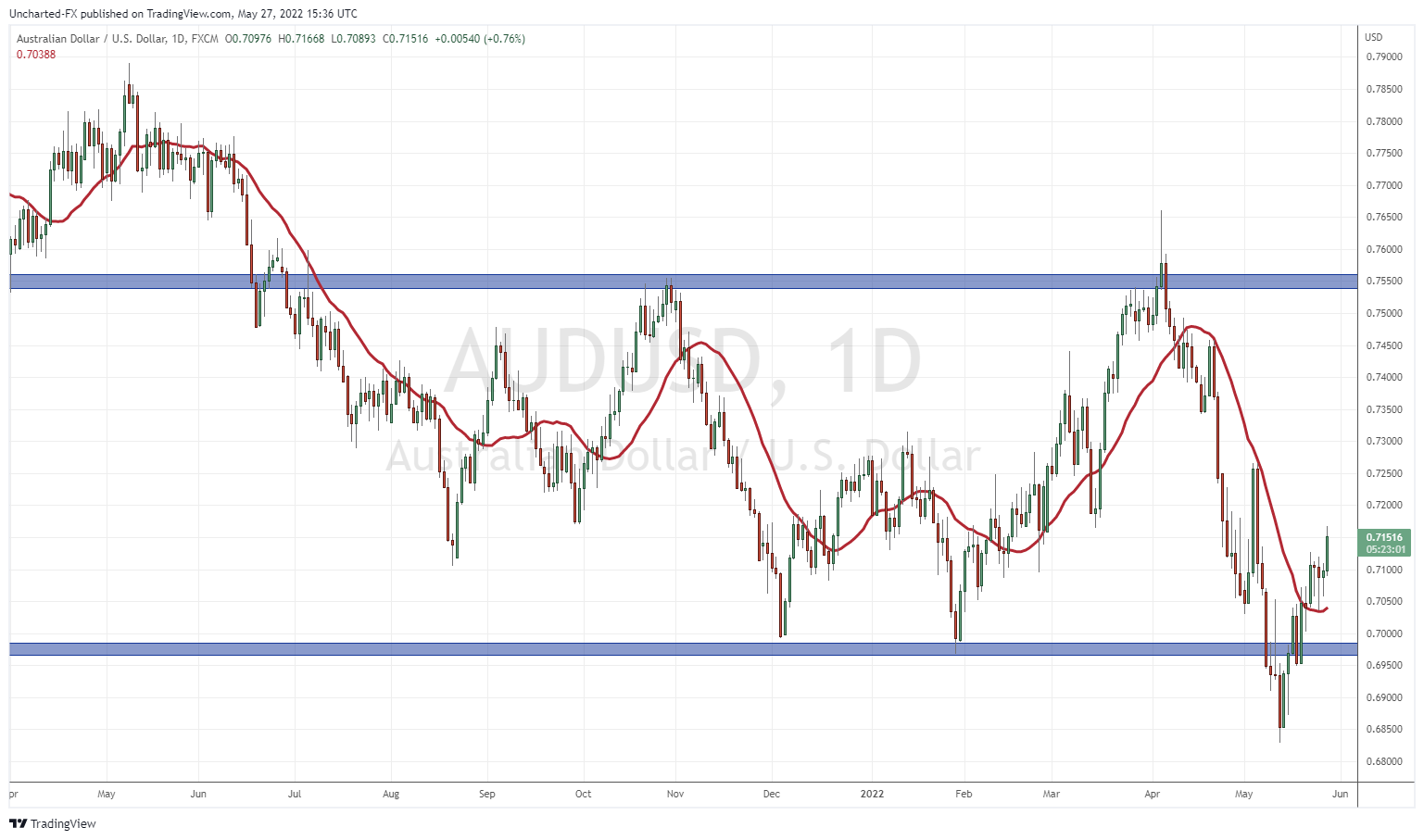 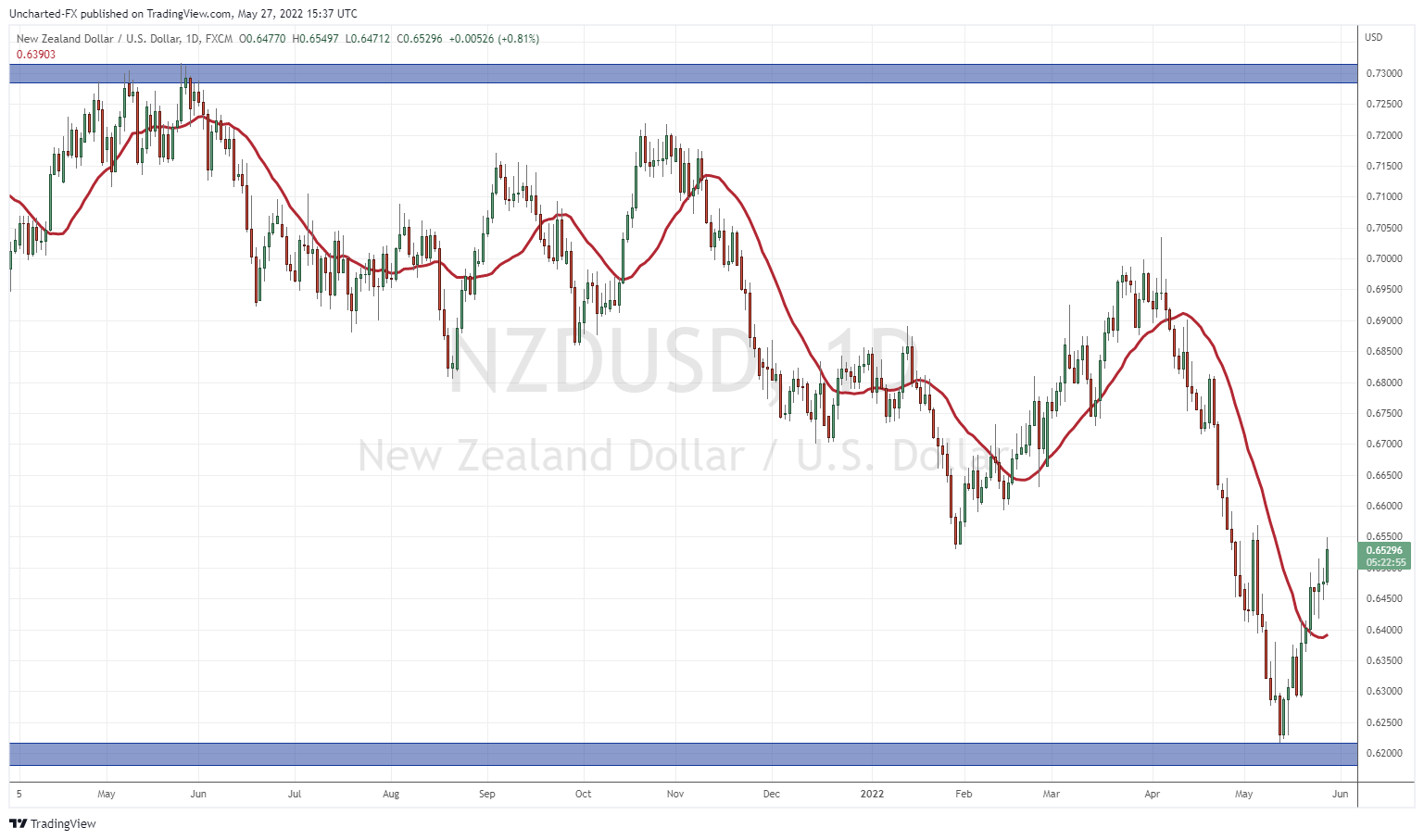 Finally, both the Antipodean currencies, the Australian Dollar and the New Zealand Dollar, are showing signs of a recovery after the Dollar rally. I prefer other currency pairs because the moves I am seeing on both of these look like “V” shaped moves. I am not really a fan of these types of patterns, but nonetheless, if the Dollar weakens further, both the AUD and NZD will see further upside.

In summary, as a forex trader we can take advantage of these moves. I am primarily a reversal trader so I have been patiently waiting for these setups. EURUSD, USDJPY and GBPUSD are my favorite looking setups. As someone who trades the stock market, I also expect a bounce. As long as the DXY remains below 102.50, markets can continue higher. If we manage to reverse and close above 102.50 for some reason, then we have some concerns.

Have gold and silver prices bottomed the day before the Fed rate decision?

It’s Fed day! Here is what I am watching

Is the US Dollar (DXY) About to Take Off?