There’s a reason that junior market traders hold tight to the saying of “May: sell and go away”, but ‘May’ started unusually early this year.

The biggest catalyst of course being the social upheaval that comes with different economies being at different stages of vaccination – and therefore varied opening up timelines. As life returns to the new normal, macro-economic trends are trying to react and inflation and interest rates are experiencing some major volatility.

Also! Y’all been seeing the bitcoin and AMC crazes over the past week alone? There are so many options for people to invest their money, and the investment community has gotten more attention during COVID. Investment choices are still obviously ranging from the traditional industries such as precious metals and bonds, and our newer choices of cryptocurrency and … lumber?

For the average investor, a good portfolio still calls for diversity to mitigate risk.

For the average investor, that just calls for an ETF or mutual fund with some passion positions because how much research can we really be expected to do?

To recap, ETFs allow you to invest in a particular sector and gain exposure to its upsides, without taking the risk of investing in specific companies.

With COVID being top of mind, it’s no surprise that the biotech sector has drawn an almost unprecedented amount of interest.

It’s not typically that popular a choice of industry – it usually requires a good amount of research and technical knowledge in order to properly assess a company’s prospective upside. That rules out specifying your investment, but biotech ETFs are a little too muffled to feel genuinely profitable.

So where does that leave us?

That’s where we’ve been trying to educate you all, by introducing a lesser-known sub-industry known as specialty pharma.

Valeo Pharma plays in that field the smart way.

Valeo comes in to market products that have already been developed. In other words, they partner with companies that have already done the expensive R&D and have products in established drug markets that aren’t Canada. The partnership then extends to Valeo’s right to in-license the drug, upon which they handle the commercialization and marketing of the product in the Canadian market.

It’s a win-win for both Valeo and their partners – but also their shareholders. The partner benefits from having a reliable and experienced partner guide their product’s market entry into Canada, and the obvious increased revenue from developing a new market.

Valeo gets all the upside of pharmaceutical profits, without having to invest in costly and very high-risk R&D.

Just take a look here at an example of the kinds of hurdles a standard big pharma company has to experience to even get close to getting a drug to market – and that’s while racing their competitors. The many series of research, trials, and then paperwork and regulatory approval stages before a drug gets to market? Not a low cost endeavour. 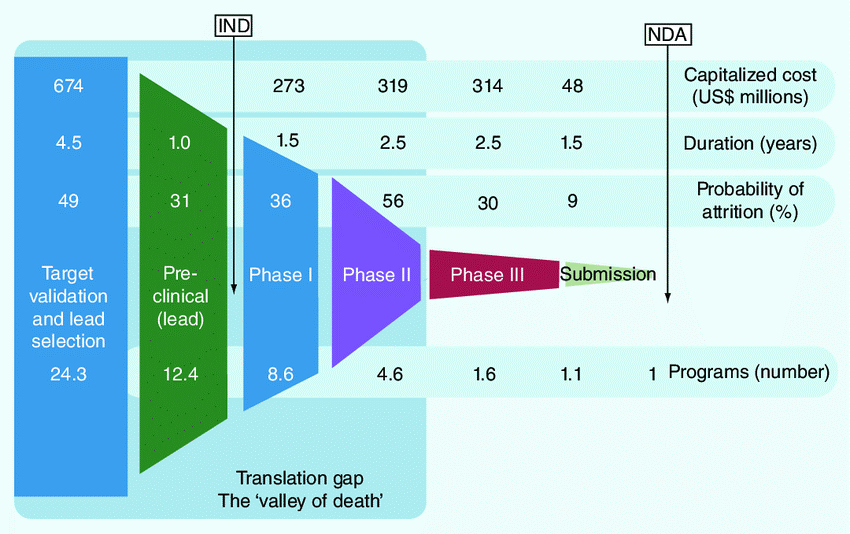 That said, Valeo avoids all of the above risks – and you don’t even have to understand the technicals, because they specialize in commercializing products that have proven themselves in other established markets.

In other words, Valeo as a publicly traded company neatly incentivizes investment by focusing their business plan on avoiding most of the barriers to profit as a pharmaceutical company.

If you take a look at their current product lineup – and upcoming drugs in the pipeline – you can even see how their stable chosen markets are even less susceptible to market volatility than the average ETF.

Just look deeper into their fundamentals.

The company has been steadily growing their already impressive collection of products and now are at a point of critical mass that’s very exciting for their current shareholders. For reference, Valeo’s net revenues have grown by a CAGR of +50% since 2016: going from CAD$0.99M to $7.47M by the end of 2020.

In a particularly timely move given the medical field’s post-COVID19 return of focus on respiratory syndromes and therapeutic technology, Valeo has announced a deal with Novartis.

Novartis is one of the largest biotech companies in the world, and Valeo now has the rights for the commercialization and marketing of Enerzair® Breezhaler® and Atectura® Breezhaler®  in Canada.

This is a partnership that could generate up to $140M+ of revenue for Valeo alone, and critically for you, reader: the market hasn’t reacted to this news yet.

Part of the reason is that Valeo intriguingly chose not to do the kind of public financing that typically draws attention and is usually necessary to fund the closing of this kind of deal.

Instead, the company has only raised and upsized offering of $6.645 millions primarily through insiders. With that kind of cash compared to the massive upside, we can only assume that Valeo didn’t pay much for this deal. Per historical trends across the industry, this type of move typically harkens the beginning of a long-term relationship between the two partnering companies.

If this proves to be true, then Valeo is even more of a dark horse than previously apparent, to be able to close this kind of deal with a pharma giant like Novartis.

It’s easy of course to be optimistic in our speculation, based on what we’ve noticed in trends for profitable specialty pharma companies. That said, Valeo’s optimistic outlook is certainly backed by analyst coverage.

Valeo’s recent (May 11, 2021) analyst report by Scott McAuley, PhD, and Analyst at Paradigm Capital, is glowing. Their report remarks that they’ve initiated coverage for Valeo, at a buy rating and a $3.50 target price in the next 12 months.

They’ve identified the short-term catalysts for Valeo as the following:

Not only does Valeo’s stock stand to react positively to any of the above internal achievements, but the Paradigm analyst also expects several external scenarios to add upside to the target pricing.

These situations include (1) an accelerated rollout of the Redesca biosimilar, (2) launch of Enerzair and Atectura  and (3) positive results from an ongoing trial at the Montreal Heart Institute testing Hesperco in preventing severe COVID-19  – to name just a few.

Of course, the current expectation of the Valeo share price to at least double is also noticeably based upon the proven success of their commercialization of Redesca.

Redesca is one of Valeo’s four products launched since Q3 2020, counting amongst its fellow launches Yondelis and Ametop. These three products are expected to reach peak sales of a combined $33-46M. With their terms just beginning at an average term of 6-8 years, and Novartis’ Enerzair and Atectura launching this quarter, it’s certainly obvious how Valeo seems to be in a significant growth stage.

Frankly, this article has gotten away from me, but it can’t end without speaking on the team.

The management team of Valeo holds approximately 54% of the company’s outstanding shares – one of those things we always look for to make sure the economic incentive of shareholders and management are in line. 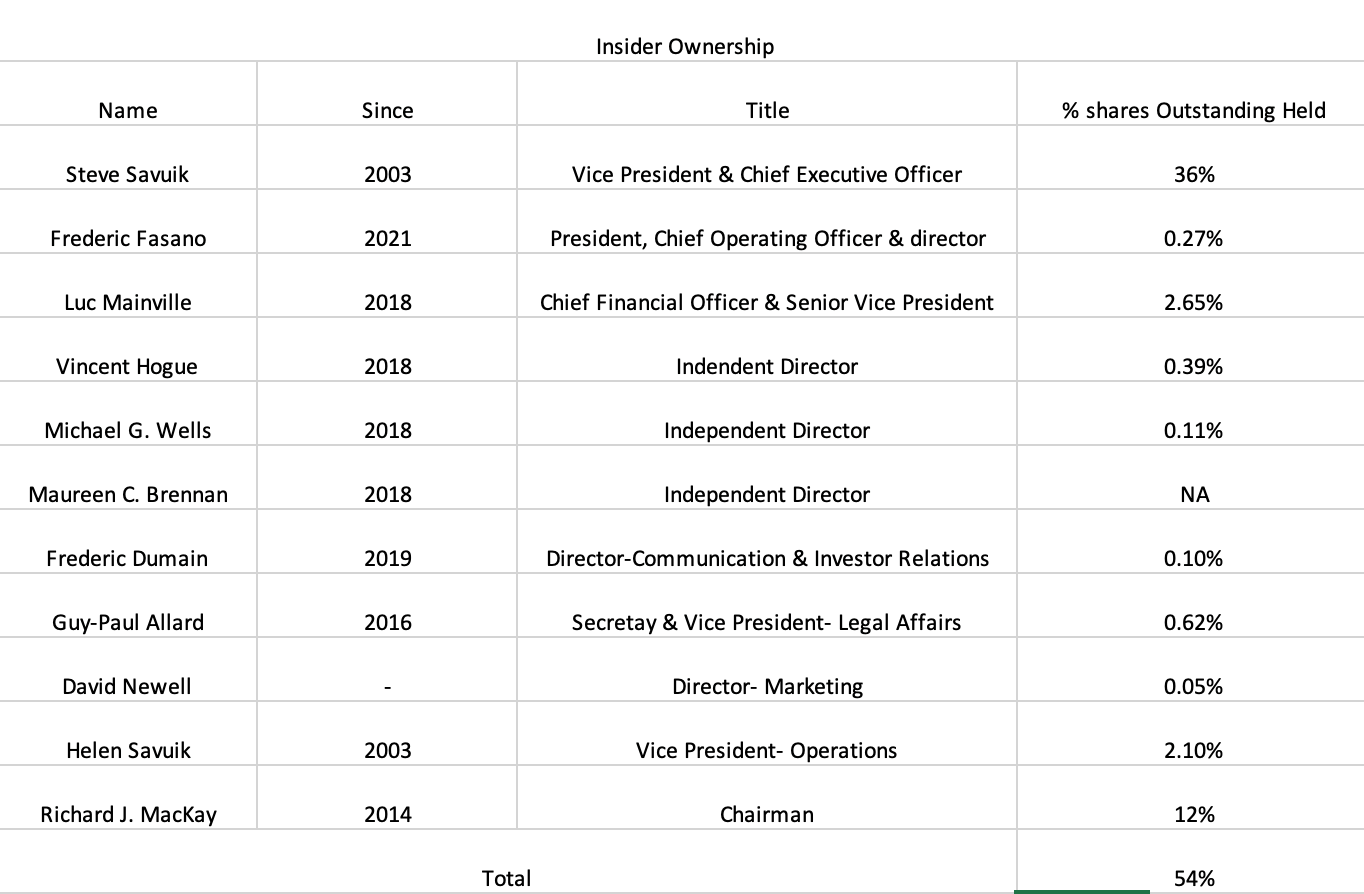 The newest addition to the team is Frederic Fasano, and equally impressive in caliber to the existing members of management.

Frederic has had over 25 years of experience managing strategic affiliates across geographics such as Canada, Europe, and Latin America – direct experience in Valeo’s specialty. Prior to his new position with Valeo, Frederic served as President and CEO of Servier Canada, the well-established and fully integrated affiliate of the Servier Group. In that position (and mark it off on your bingo sheet as you hear more words that are exactly what Valeo does), Frederic led strategies in portfolio diversification, including multiple in-licensing deals, and strengthening team capabilities to optimize support for portfolio growth. He’s sat on the Board of Directors of ILKOS Therapeutics, and chaired the Board of Innovative Medicines Canada. Academically, he holds an MBA from ESSEC Business School (France), and a Pharm. Degree from Paris-XI School of Pharmacy (France).

Shareholders have legitimate reason to have faith in the team, the direction of the company – and ultimately the inevitability of upsides in the upcoming months. Certainly, Valeo’s partners are showing every indication of having a similar intention to the value of Valeo’s ability to commercialize, and it’ll be critical to identify how Novartis and Valeo arrange their partnership moving forward.

If you invested based on our coverage of Valeo since the beginning (July 2020), you’d already have made anywhere between 7.6% and 28% on your initial investment by now. Valeo’s only gained momentum with its pipeline and interested and optimistic analysts since.