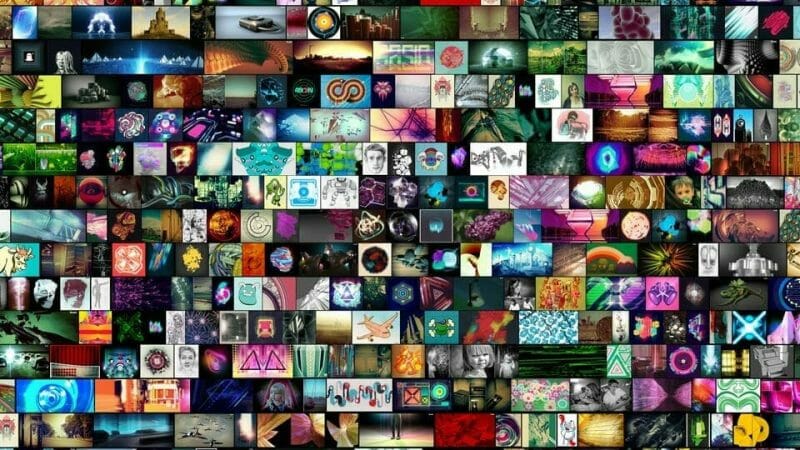 It was the morning of February 24th, 2021. The sun was half-shining and I had happily forgone the online Pilates class I’ve been planning to do for weeks. I was brewing my third cup of Nespresso coffee when assaulted by the headline:

Who is Beeple? You may be wondering? Some new demeaning term for millennials ruining the taxi industry? No.

Beeple is a graphic designer from Charleston, USA named Mike Winkelmann.
In his own third-person words,

“he makes a variety of art crap across a variety of media. some of it is ok, but a lot of it kind of blows ass. he’s working on making it suck less everyday though so bear with him… :)”

In his subscription prompt,

“join the over 200B+ people who have subscribed the shit out of this mailing list and immediately became instantly hot affffffffffffff!!!!!!!!!!!111111”

Then, the following headline from the New York Times: “Beeple Brings Crypto to Christie’s”

What is Christie’s? A prestigious British auction house founded in 1766.

The article reads: “Today, digital artist Mike Winkelmann, aka Beeple is having a piece auctioned by Christie’s… It will be the first fully digital, NFT-based artwork ever sold by a major auction house, and the first to accept cryptocurrency as a payment option.”

Let me decode the horrifying gibberish being spat here and the various ways in which this innocent morning of mine, spiraled.

What is a NFT?

A Non-Fungible Token. (I am calling it, the word “fungible” is the next “moist”, which is to say, the most offensive word in the English language)

A fungible asset can be any type of currency. Fungible means exchangeable, interchangeable, (insert any other “angeable”), meaning, two of the same items have no difference in value. Both of our CAD $50 bills are worth the same amount. Just as my 5 bitcoins are equivalent to your 5 bitcoins (I do not know anything about bitcoin other than that the sheer concept of it gags me).

A Non-Fungible Token, in turn, is unique. You cannot exchange one NFT for another and each one accrues value independently. NFTs come in many forms. They exist as different kinds of digital assets. For instance, I’ve just learned that there are digital sneakers, postcards, playing cards, and of course, our topic of choice: works of art.

What exactly is being auctioned?

A digital collage of the first 5,000 “other-worldly” images from Beeple’s “everyday” series, in which Winkelmann has created a new piece of digital art every day for over 10 years. I have to give him kudos for the dedication. I don’t have a single good habit I’ve maintained over a decade yet.

Blockchain, I promise I will try to keep this short, like a leg wax:

Blockchain is basically a giant database. Think of an excel spreadsheet. It is just a place to store information and organize it. It is valuable insofar as it is “un-hackable” (whatever that means) and unchangeable (it is there, unedited, until the end of time).

From what I’ve gathered, (I feel like Marty McFly in Back to the Future), there are screenless computers all over the world called ‘servers’ that store, send, and receive data. In essence, they “serve” something else (i.e. our computers with screens). Blockchain technology allows data to be stored globally on thousands of servers. (The whole thing has given me some real The Matrix when they zoom out of the pods sort of energy. Or, less futuristic, a switchboard operator room (like in Marvelous Mrs. Maisel) but without the beautiful wardrobe and ‘operator’ element.)

The name “blockchain” simply references how the data is stored. Data is entered into what is called a “block” and then linked or “chained” to a previous block.

For instance, I’ve created a digital work of art.
You can assign a unique identifier to each piece of artwork in the same way that humans can be identified using their SIN #.
It is called: Madelyn Grace, “I Hate Blockchain”, 138790 –  $40. This is the first block.
I then sell my work “I Hate Blockchain” on one of these ether-market places to Joe Shmoe.
There is a chain that links Madelyn Grace to Joe Shmoe, until the next transfer of the art.
And the link continues, chronologically, infinitely.

Cryptocurrency is one of the most famous applications of Blockchain technology.

Blockchain is like a plowed field and things like original content creation, music royalties tracking, advertising insights, cryptocurrency exchange and an endless amount of other tech things are all the various crops.

NFTs don’t actually live on the blockchain, but rather, a secured code does. This code refers to a file that sits in another secured place on the web. (To quote my nana, “I am not for this world”).

Positive impacts on the art world:

1. In the past, digital artwork has not felt like one of a kind. What if people stumble upon digital copies? Screenshots?

After all, isn’t that why a painting or sculpture feels so special? There is no one in the world who can have the exact same thing. This is why prices for photography and video art aren’t as high as other forms that are characteristically unique by nature.

NFTs can help legitimize the digital art space. It allows for the buyer to have secure ownership over the work, granting it the innate exclusivity of other art forms.

2. Another consideration: NFTs offer the potential to give artists royalties. Since the blockchain chronologically tracks every purchase and sale, the artist can specify that they want a particular percentage of each transaction. I’m sure Basquiat got $200 for a painting that is now selling for $110 million. Royalties to the family would’ve been nice.

3. Validation of authenticity has always been difficult in the art sphere. Traditionally, coming up with a provenance (purchase history) of a work of art has required sifting through scraps of paper to sort who bought what, when, leaving ample room for counterfeiting and fraud. So, the introduction of NFTs is able to alleviate this overhead; there is already an encoded validity that this artwork is scarce.

*Yes, this does mark a breakthrough for digital artists (love that). However, in practice, my little renaissance mind still cannot comprehend what the fuck.

How does this hang in my house? I still don’t get it?

Noah Davis, a specialist in the Post-War & Contemporary Art at Christie’s in New York who led the Beeple sale concedes, it is “an exercise in abstraction.” He furthers, “the actual NFT-based artwork is just a code. It doesn’t exist. It has no objecthood.

So let me ask again Noah, why is a person spending $6.6 million on a code?

“It’s important to define the artwork itself and the symbol that represents the artwork, separately. The actual NFT-based artwork is truly just a non-fungible token — it’s a long series of letters and numbers that is dropped into a digital wallet. But the symbol that represents the token is the monumental collage that Beeple put together, and one could argue that the token basically implies that this is contained within it.”

For those romantics among us who love the smell of turpentine and stretched canvas, this whole NFT thing is quite confusing, to put it gently – or a hellscape, to put it accurately.

To reiterate: you can look at this image on your computer, phone, virtual reality, etc.

Noah explains that it is not yet something you can conjure in your mind’s eye and that you do need a screen-portal. “Maybe there will be a chip that can be implanted in your head one day, but we’re not quite there yet.”

I have never felt closer to my nana in my life.

I guess, in an attempt to knock the pretension out of myself, there will always be an audience for something challenging. Something that disrupts. No matter the motive, whether it be investment opportunity, radical declaration of philosophy and values, or obsession with novelty and rarity, one thing is true: Art-as-code is here, whether we are ready for it or not.

In the meantime, I have linked a digital gallery if you’re still confused by all this (I get it, same).

For more on what this means for the financial markets and my mental wellbeing…next week.