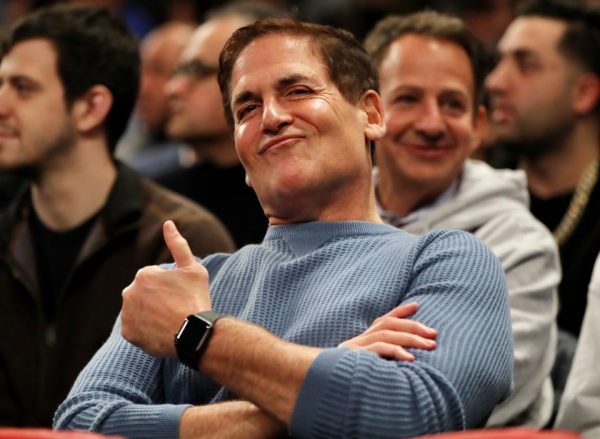 Today in strange blockchain news, Mark Cuban sold one of his tweets to the tune of $952.94.

The Store of Value Generation is Kicking Your Ass and You Don’t Even Know it Yet !https://t.co/7YQ7ueXFLr

Eighteen words comes out to $52.94 a word. Not a bad rate of return for two minutes of effort.

For all of his business acumen, Mark Cuban has a flair of the pointlessly dramatic and whenever he shows his face in the media, his showmanship usually inspires a requisite eyeroll. If you’re unfamiliar, he’s the owner of the Dallas Mavericks, and one of the more sedate personalities in the regular lineup of Shark Tank’s assortment of egos and assholes.

In this case, he’s lending his dubious star power in support of blockchain, and more specifically, the newest wave of digital tulip-mania since initial coin offerings: non-fungible tokens (NFT).

Now the proud owner of that tweet is one Tim Kang, who promptly minted it into a NFT, with all the appropriate metadata attached.

A general rule of thumb is that if Mark Cuban shows up anywhere in the news touting a new techno-gizmo, you’re probably better off giving it a pass. In this case it requires a closer look, because underneath the sensationalism and hair gel, it’s a technology with use-value, even if tragically overhyped. Kind of like blockchain was in 2017.

Non-fungible tokens are a special type of token commonly associated with the Ethereum blockchain that acts as a stand-in for a digital item. It’s non fungible because it’s not interchangeable.

When something is fungible, it’s interchangeable with something of the kind. A dollar is fungible because it can be exchanged for four quarters, or ten dimes or twenty nickles. A bitcoin can be reduced to a single satoshi, or kept as a tranche. A good or an asset, like houses and cars, are not interchangeable and are therefore non-fungible. Comparably, no two NFT are alike.

NFTs are used to create verifiable digital scarcity, and confer ownership across multiple platforms. They’ve found widespread utility in applications and programs involved in crypto-art, collectibles and gaming, but their utility could theoretically expand to things like real estate.

It’s the diversity that’s drawn YouTuber’s like Logan Paul into the space.

He’s partnered with a peer-to-peer exchange called Bondly that allows trading NFT across any chain and through any medium. Paul’s NFTs are of a character fashioned after himself, holding up trading cards and accented with the logo for his own clothing brand. He dropped a set of 3,000 NFT on February 19, each selling for 1 ethereum.

Let’s not get derailed by strange market sentiment here. In the future, nobody’s going to buy digital pictures or tweets for exorbitant amounts of money. But there’s real value here.

Originally, NFTs were used as proof-of-concept and use value proposition for the efficacy of blockchain technology. It’s how something like ownership gets codified onto a blockchain, and verified. For example, CryptoPunks was launched in 2017, which was the first use-case for rare art on the Ethereum blockchain. Someone could doodle something in MS-Paint, put their name on it, and put it on Cryptopunks and that doodle would be irrevocably and verifiably theirs.

Later on, popular games like CryptoKitties started using NFTs for in-game assets, which could be controlled by the user instead of the game’s developer. These could be traded on third-party marketplaces without permission from the game developer.

But really it’s going to be companies like Fandom Sports Media (FDM.C) that use them when the hype dies down. They have recognized the value within NFTs and started offering non-fungible options to reward esports fans for using their platform. Or maybe Netcents (NC.C), which started offering NFT trading back in December of 2020.

Non-fungible tokens share the same weakness as everything else in the cryptocurrency sphere: scaleability. Right now they’re reliant on ethereum’s blockchain, which means that everything you do using a NFT is subject to the same issues that everyone else dealing with the ETH ecosystem has to deal with—slow transaction times and lag. This means the same hurry-up-and-wait atmosphere that drives away any prospect of widespread adoption.

Eventually, the hype around NFT will die down and it’ll end up another piece of set-dressing in the strange and often redundant world of blockchain-based technologies.  Until then, though, the last word remains to pay attention to what’s being sold and not what’s being said.