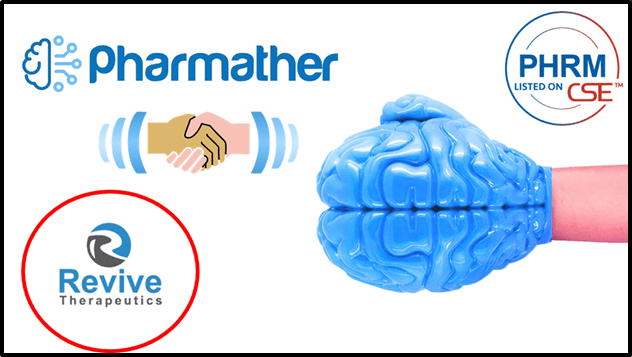 Six days ago, Revive Therapeutics (RVV.C) announced that it had entered into an exclusive research collaboration agreement with PharmaTher (PHRM.C) – a specialty psychedelics pharmaceutical company.

The collaboration will “accelerate the development of psilocybin in the treatment of cancer and the discovery of novel uses of undisclosed psychedelic compounds”.

RVV is focused on the R&D of therapeutics for medical needs and rare disorders.

In the micro-cap space, collaborations matter.

When you are operating on a new frontier (psilocybin) – a collaboration with a smart medical tech company signals that you are not a misunderstood genius isolated in a crazy doomed dream.

“Revive continues to be focused on developing novel uses for psilocybin that leverages our proprietary oral thin film delivery technology as a differentiated therapeutic approach,” stated Michael Frank, CEO of Revive on November 18, 2020. “We are excited to advance the development of PharmaTher’s recent discovery in the potential of psilocybin to treat certain cancers such as Liver Carcinoma, Melanoma, Breast Neoplasms, Kidney Neoplasms and Acute Myeloid Leukemia.”

By mid-morning trading, PharmaTher’s parent company Newscope Capital was up .03 to .17 and RVV was also on the move – surging 17% on 3.2 million shares traded. 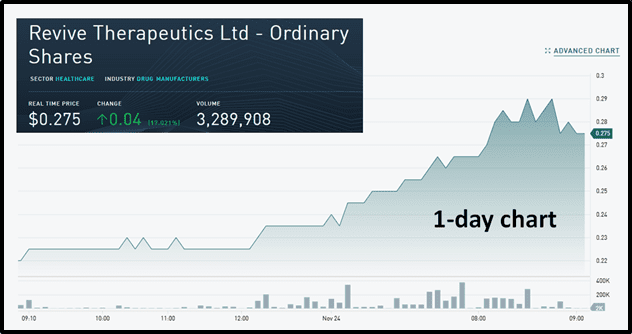 “PharmaTher is positioning itself to partner its psilocybin program and panaceAI, and focus on advancing its novel ketamine product pipeline in Parkinson’s disease, depression and pain via the U.S. Food and Drug Administration (FDA) regulatory pathway,” announced PharmaTher.

“We have made tremendous progress over the last several months that saw our product pipeline evolve to focus on the massive opportunity and potential of ketamine, an FDA approved drug with a known safety profile, to treat significant unmet medical needs for Parkinson’s disease, depression and pain,” stated Fabio Chianelli, CEO of PharmaTher.

“With our focus on ketamine through repurposing, combining it with an FDA approved drug and delivering it with our novel microneedle delivery system, we are now positioned to expedite our clinical development objectives by taking advantage of the FDA’s 505(b)(2) regulatory pathway and commercializing disruptive ketamine treatments for mental health and pain disorders,” continued Chianelli.

“We are excited to partner with Revive Therapeutics on our psilocybin cancer program and our psychedelics discovery platform, panaceAI, to unlock the potential of novel uses of psychedelic compounds in diseases that have sub-optimal or no treatment options,” stated Chianelli on November 18, 2020.

“Our research collaboration with Revive validates our business model in discovering novel uses of psychedelics with panaceAI and partnering these discoveries with life sciences companies seeking to expand their product pipeline with psychedelics,” continued Chianelli.

The collaboration gives Revive the exclusivity to advance the research of psilocybin in the treatment of cancer and leverage PharmaTher’s panaceAI psychedelic discovery AI platform to screen, identify and evaluate undisclosed psychedelic compounds directed at pre-specified targets for use with Revive’s drug delivery technology. 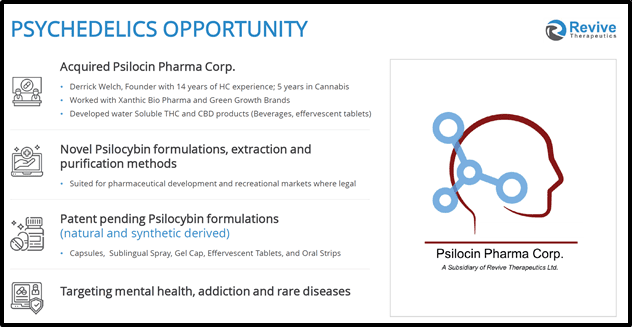 Two weeks ago, Revive updated shareholders on its oral thin-film delivery system with psilocybin being developed “under a research partnership agreement with Reed Research Group out of the University of Wisconsin-Madison”.

“On November 3, 2020 the state of Oregon voted to legalize psychedelic mushrooms for therapeutic use, a first for the nation,” writes a Quartz Magazine Health and Science Reporter, “And residents of Washington DC passed a ballot initiative that would decriminalize magic mushrooms and other psychedelics”. 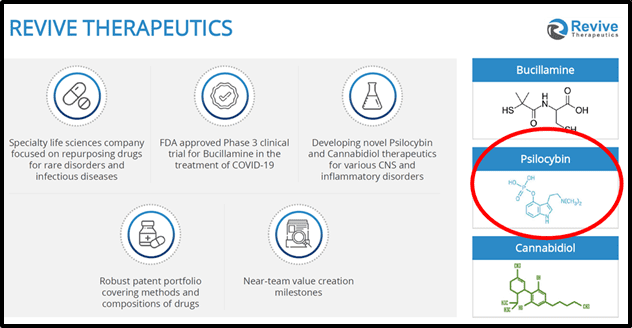 Investors judge a micro-cap by the company it keeps.