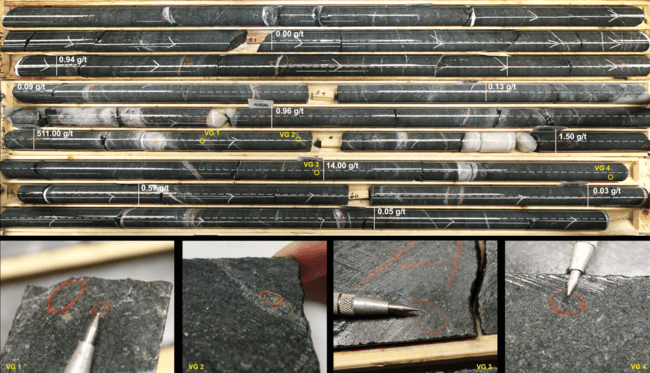 Whether you’re a seasoned mining CEO or a penny ante investor, there’s a lot to be said for limiting one’s focus to only the very best mining jurisdictions in this age of political and economic uncertainty.

I suppose it can be argued that even top-shelf destinations, those shortlisted by the venerable Fraser Institute in their most recent “investment attractiveness” survey, could do something rash, like raise taxes on mining to make up for a shortfall in gov’t revenue (a consequence of the economic rout we’re in). These are unprecedented times, after all.

But countries like Canada and the U.S. are unlikely to expropriate a rich mining asset in the name of national interest.

GFG Resources (GFG.V) is an ExploreCo strategically positioned in mining-friendly Ontario and Wyoming

GFG Resources is a company we’ve been tracking here at Guru Central for well over a year now. It’s been featured numerous times in our round-up pieces, beginning in the winter of 2019.

As I keep insisting in these pages, management is everything. You can have a great asset, but without an efficient team—a gifted group of rock kickers and business-minded men and women—there’s often an erosion of value, one that becomes pervasive over time.

The founding members that put GFG together three years ago are largely the ex-Claude Resources group. This crew has numerous significant exits under their collective belts: Integra Gold, Viceroy, Lake Shore, Elgin, Dalradian, and the 2016 sale of Claude Resources to Silver Standard for $337M. I look for these details when conducting my due diligence. Monetizing an asset via a takeover offer from a resource-hungry producer can be the ultimate avenue for creating shareholder value.

In its quest for Tier-1 assets—deposits with a mine life in excess of 10 years and 500,000 AuEq ounces of annual production—the company assembled a highly prospective portfolio of projects in Wyoming, and the prolific Timmins Gold Camp of northern Ontario (the Timmins camp has produced more than 70 million ounces of gold over the years).

The Company’s wholly-owned Pen and Dore gold projects, two large and highly prospective gold properties just to the west of the Timmins Camp, share the same geological setting that hosts the majority of the region’s significant deposits and discoveries.

The Company’s district-scale Rattlesnake Hills Gold Project in Wyoming bears geologic similarities (alteration and mineralization) to other deposits located along the Rocky Mountain Alkaline Province—deposits that have produced in excess of 50 million ounces of gold.

These belts are not only favored for their extraordinary mineral endowment, they are mining-friendly jurisdictions where permitting is generally a walk in the park.

Cashed up for an active H2

Mineral exploration is a capital intensive game. With $7.1M in the bank, GFG can fund a lot of exploration.

The $7.1M came out of an April 2020 raise that brought in Alamos Gold (AGI.T) as a major shareholder.

This deal got done at a premium to the market at the time, without any dilutive bells and whistles (warrants).

GFG controls one of the largest land positions in the Timmins Camp, some 680 square kilometers of highly prospective terra firma. 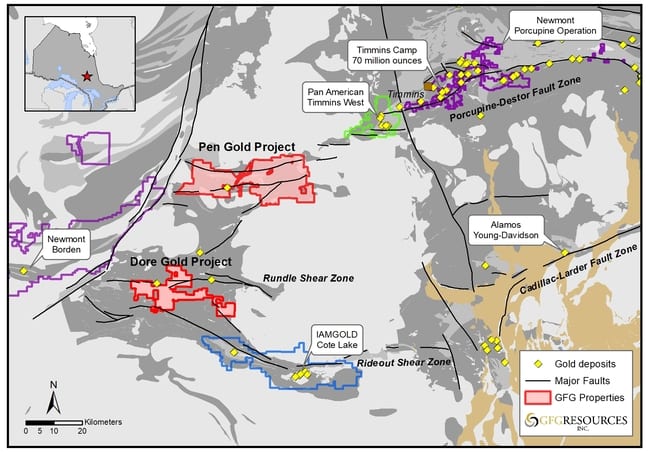 According to the Company’s geological modeling, the Porcupine-Destor Fault (top right of the map)—the structure that has served as a trap for much of the Camp’s 70 million ounces—continues into Pan America’s asset and on through GFG’s Pen Gold Project.

This is a vast land position where the company controls roughly 60-kilometers of greenstone belt. And it’s surrounded by infrastructure.

Pen has been the bulk source of the company’s headlines in recent months, the most significant having dropped in early April…

GFG Drills 71.27 Grams of Gold per Tonne Over 8.5 Metres at the Pen Gold Project West of Timmins, Ontario

It’s important to understand that the Pen project boasts a number of regional targets, some of which have yielded new discoveries with potentially economic mineralization, some very high-grade. 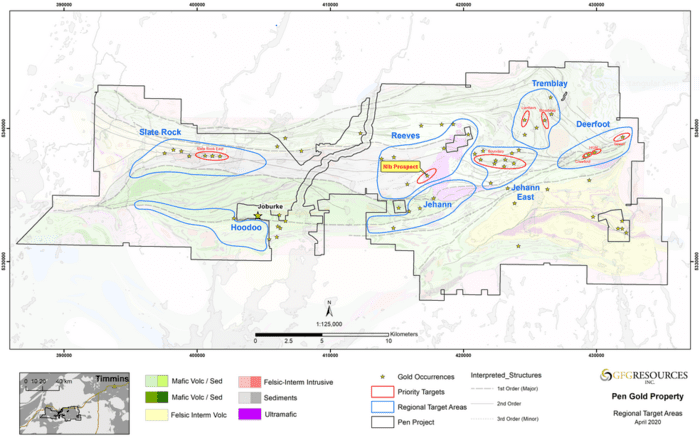 These April 6 headline numbers belong to the Nib Prospect—the company’s most recent discovery— in hole PEN-20-047 (highlighted in the center of the above map).

There are mineralized intervals all through this discovery hole, but note the highlighted intercepts, the grade, and the depth (beginning at 52 meters from surface).

Hole PEN-20-047 was designed to test for the depth extensions, including any sub-parallel vein sets, in a hole that tagged 0.89 g/t Au over 7.0 meters during an earlier campaign (PEN-18-017). The following map gives you a cross-section of the discovery. 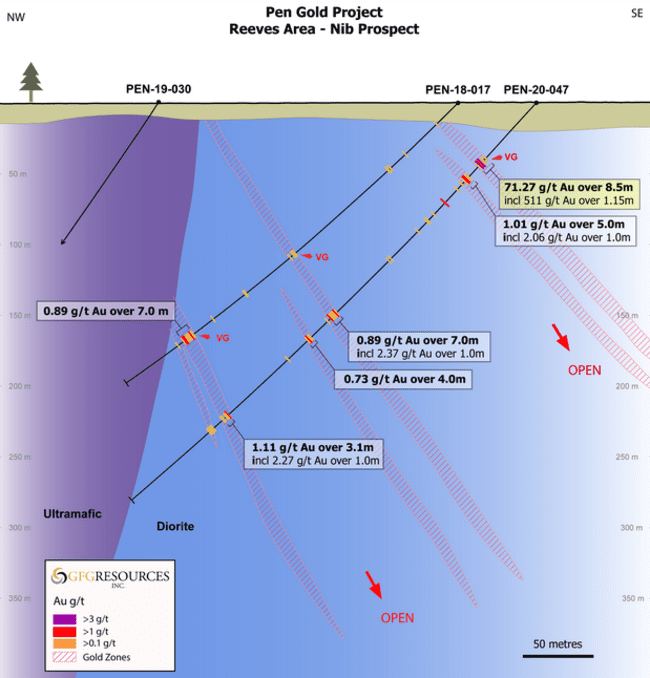 The mineralization in PEN-20-047 is extensively sulphidized. Most of the gold is in the wall rock along the vein. That’s a setting every geo-type can appreciate.

There has been no drilling beneath this hit and there’s very limited drilling along strike. Translation: this zone is wide open for additional high-grade mineralization.

The Nib Prospect lies within the Reeves area, a target-rich camp-scale chunk of prospective ground measuring some 4 x 6 kilometers.

We’ll see a drill rig mobilized to the area shortly. In fact, we’ll see 8,500 meters drilled at Pen in H2.

Following up on the Nib Prospect discovery will be GFG’s primary objective.

“Hole PEN-20-47 is the most significant intercept ever drilled on our 500 square kilometre Pen Gold Project“, stated Brian Skanderbeg, GFG president and CEO.

“This exceptional intercept along with the multiple mineralized intervals further downhole demonstrates that the Nib Prospect has the potential to host a large-scale gold system. These recent results in combination with numerous significant intercepts at our other regional targets, validates our view that this portion of the Abitibi has the potential to host multiple gold deposits next to a world-class gold camp. We look forward to follow-up drilling on this very exciting and underexplored target in our Phase 2 2020 drill program in the third quarter”

On June 18, the company released final assays from their phase one 2020 drilling campaign, highlighting results from their Slate Rock regional target, as well as their HGM Prospect along the Deerfoot deformation zone.

Note the scale on the above map (lower middle). Note the distance between Slate Rock and Deerfoot.

Highlights from this June 18 press release include:

There’s no shortage of targets, both untested and follow-up, at the Pen project.

Results tabled in the April 6 press release—71.27 g/t Au over 8.5 meters—prompted management to double its exploration budget for 2020.

Everything shaded in red below will receive a proper probe with the drill bit in H2 of this year. This should generate significant newsflow over the balance of the year. 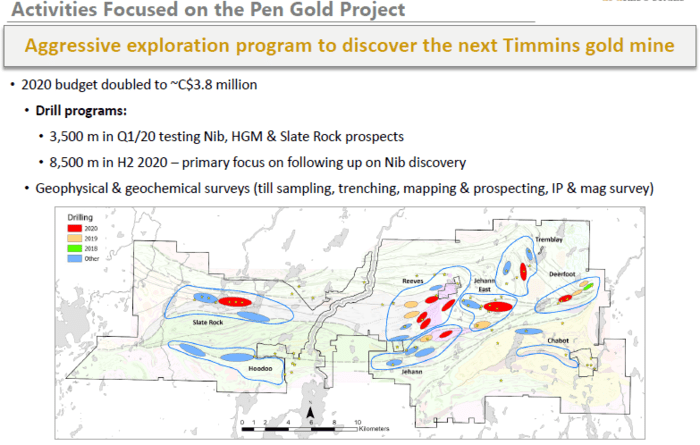 It’s easy to see why Alamos Gold waded in for a 9.9% stake in the company last April.

A little further to the south, its very early innings for the company’s 212 square kilometer Dore Gold Project.

As with Pen, the company will lay the groundwork, stacking good science—geochemical and geophysical—to flesh out high-priority target areas for a future probe with the drill bit. 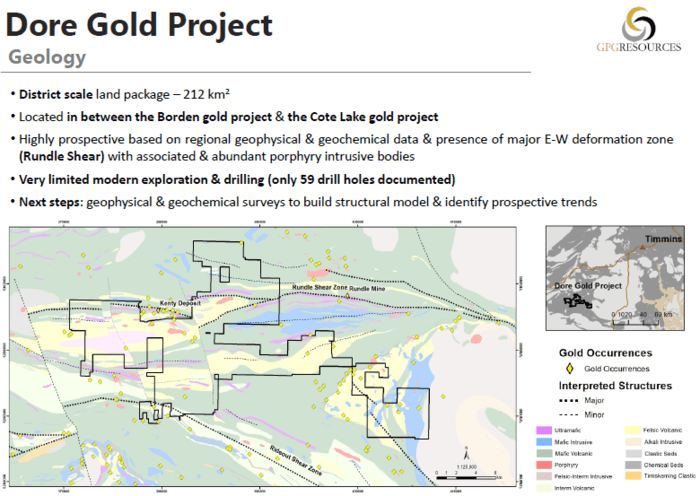 Acquired back in 2015, Rattlesnake Hills is an alkaline gold district encompassing some 135 square kilometers where three main zones of mineralization have been discovered to date. 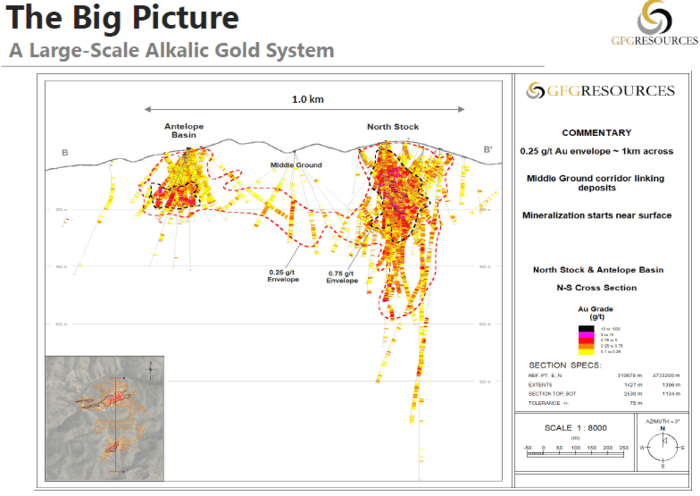 The project has received over 102 kilometers of drilling (yes, kilometers) with over US$40M spent.

Management characterizes the property as “a very interesting opportunity, and a very leveraged asset“.

This is another target-rich asset, one that has delivered some truly spectacular drill hits over the years. 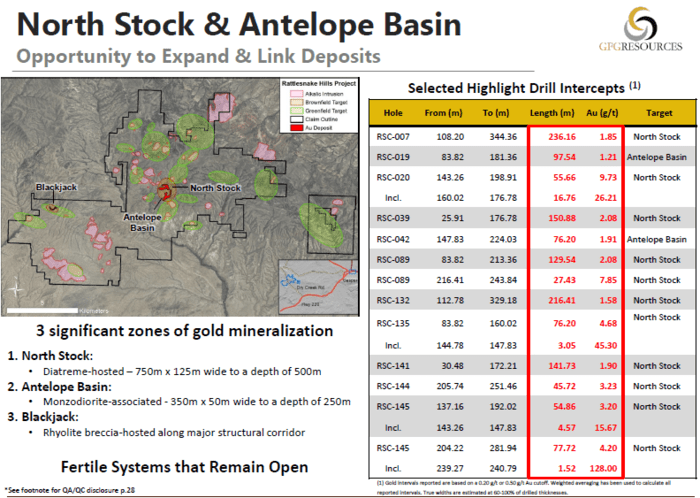 Interestingly, Evolving Gold was propelled to a market cap of nearly $200M when it operated the project back in the day.

JV partner Newcrest Mining returned the project back to GFG in April of this year after drilling only one deep target. The company is currently examining its options re Rattlesnake Hills.

The project has multiple, fully permitted (brownfield and greenfield) targets ready to test with the drill bit. 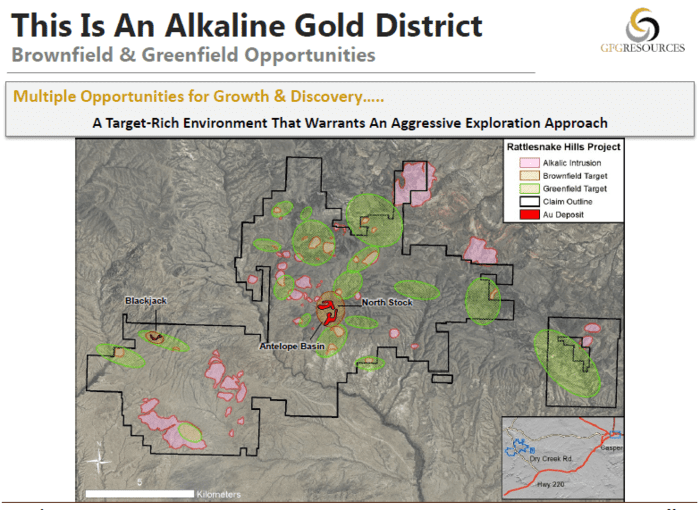 The last stepout hole drilled by GFG along the western extension of the North Stock zone tagged 0.82 g/t Au over 99.1 meters in oxide material (this included a higher-grade interval of 1.30 g/t Au over 54.9 meters).

The are a number of potential catalysts that could trigger significant upward share price trajectory in H2 of this year.

With $7.1M in its coffers and an aggressive drilling campaign at its Pen Project in H2, newsflow will be steady.

Full disclosure: Equity Guru does currently have a marketing relationship with GFG Resources.